Gas prices making their way down

A longtime Sharpsburg landmark is being declared a total loss after a significant fire at the Heirloom Market and Bakery. 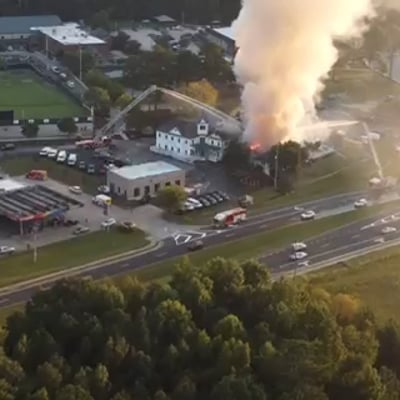 The call came in after occupants of the building noticed smoke and flames coming from the building. The building was successfully evacuated as crews began the process of containing the fire, according to Chief Robbie Flanagan of Coweta County Fire Rescue.

Upon their arrival, crews witnessed flames coming from the roof of the building and were unable to make entry due to the severity of the fire and the roof being compromised.

Firefighters managed to control the blaze while members from the Coweta County Sheriff’s Office managed the traffic situation, which coincided with the often challenging evening traffic patterns on Highway 54.

The building is determined to be a total loss, Flanagan said, noting the majority of the roof has collapsed. Several trucks from the city of Newnan and other agencies have been dispatched to cover the calls in the county during the operation.

The cause of the fire is unknown at this time, and the incident remains under investigation. The fire is believed to have started near the front of the building, according to Flanagan.

While crews are working to determine the cause, one resident is remembering her connection to the building and the memories she created as a teenager.

The building was by hand in the late 1960s by Willie Albert Thompson. However, his family had been residing on the property and running a small store since the early 50s.

It’s often difficult to imagine one of Coweta's most congested areas as a pastural, rural setting where Willie’s son, Don, often rode his bike on Highway 34 and 54 and rarely saw many drivers.

Behind their home, where Trinity Christian is now located, was all pastures for "Rolling Meadows," a cattle farm owned by the Candler Family.

Don is now pushing 74 years old, and marvels at how the area has changed so much since he was a child.

“Now, it’s all being developed, and those cow pastures are subdivisions and a car dealership,” he recalled. “It's amazing how much it’s changed.

During that time, Willie ran a general store constructed of concrete blocks and sold the essentials, including beer, snacks, soft drinks and gasoline. While he was stationed at Fort McPherson during the day, his wife would run the store until he got home that afternoon, Don recalled.

But according to Don, his father's passion was barbecue and always had a smoker outside, which provided some tasty meals for traveling customers, long before Interstate 85.

“People traveling from Atlanta to LaGrange would always stop by, because that’s just the way you went,” Don recalled. “We’d meet people from all over. It was a really nice time back then.”

But Willie had a bigger vision that went far beyond the concrete walls. His new building would be a direct reflection of his vision, which included the use of hard pine for the bones of the structure.

“All those homes in Newnan were built with hard pine and it was essential he craft his new building with it,” Don recalled. “It was already getting harder to find, even back then, but somehow, he heard about an old cotton mill in LaGrange that was being torn down that was constructed of old hard pine.”

Don recalled riding with his father to the old mill to salvage boards. At some point, the building collapsed on both Don and Willie. It took several hours for them to be rescued, but, remarkably, they were uninjured.

Willie utilized the lumber from the old cotton mill and created his new restaurant entirely from the coveted hard pine.

“We always had a pit outside and he bought the hams and cooked them himself,” Don recalled. “But even when he moved into the new building, it still a regular restaurant. My dad had big ideas and often struggled paying for everything because it grew and grew as he kept building.”

But soon Thompson’s Barbecue was the premier spot on the east side of the county to go out to eat. Over the years, the restaurant entertained patrons, offered a dance floor and even wedding rehearsal dinners were hosted there.

“Back then, Coweta had Sprayberry’s and Melear’s, but there wasn’t anything on the east side of the county,” she recalled.

While the food brought people inside, the interior was something that caught the eye of customers, Peters said.

“It was built with yellow pine, and people would marvel at the work he’d done in the interior,” she said. “It seemed very classy for a barbecue restaurant.”

Perhaps in an effort to match the cuisine with the level of architecture, Thompson ultimately shifted his menu to offer a variety of food that Peters recalled as “classier” than his previous barbecue fare, along with a dance floor.

“This was before Peachtree City really took off, so this was the place to eat back then,” she recalled.

In 1984, Thompson passed away and his family would ultimately sell the restaurant and adjacent property that included his home, which was located behind the current Valero gas station.

Over the years, the building changed owners and identities. Many might remember it as the Jasmine Tea Room, then Collectors Corner, until it became home for Heirloom Market and Bakery in 2019.

The future of the building is uncertain, but Peters said her memories of her uncle and his dream to open his own restaurant will last a lifetime.

“I used to meander through that building and marvel that he built the whole thing with his own hands,” she said. “As a teenager, you don’t really grasp how significant that is. He went from a cinder block building to a fantastic piece of architecture, and I know he was very proud of it too."

After witnessing images from Wednesday’s fire, Don said he’s heartbroken and hopes answers will be forthcoming.

“My dad put his heart and soul into it, so It’s sad it ultimately came to this,” Don said. “We just want to know what happened.”