Family members are in mourning Thursday after a relative was killed when a teenager fleeing from police struck their home with a car, according to police.

The incident occurred early Thursday morning when a Coweta County deputy patrolling the area of Highway 54 and Johnson Road was reportedly passed by a car that failed to dim its headlights. 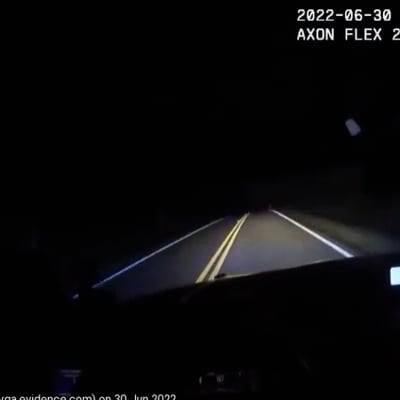 When the deputy turned his patrol car around to perform a traffic stop, the car fled from the area, with speeds often exceeding 130 mph, according to Toby Nix, public information officer for the Coweta County Sheriff’s Office.

The deputy eventually lost sight of the car on Johnson Road but saw a resident standing in their yard who told the deputy the fleeing car had crashed into a neighboring house.

The deputy found the car had crashed into the home and two occupants had been injured, Nix said.

In the video released by the sheriff’s office, a blue flash can be seen, which is believed to be the car crashing, Nix said.

A male and female were transported to the hospital, and the female died as a result of her injuries, according to Nix. The 56-year-old victim was identified as Annette Rush.

The driver, identified only as a 14-year-old male, was taken into custody, medically cleared and transported to a youth detention center. The Georgia State Patrol is expected to charge the juvenile with vehicular homicide, Nix said.

Among those mourning are Kenethia McCrary, 50, who is the sister-in-law of Annette. She knew Annette all her life, as McCrary’s family lived down the street from her family. She genuinely got to know Annette when she was in high school.

“She was the best person you could ever meet,” McCrary said. “She was one of those people who would do anything for you. Anything you asked of her, if it was in her power, she would do it.”

“She made the best macaroni and cheese. Ever. That was her signature dish,” McCrary said.

The family had received conflicting stories, but they heard that the driver of the car had lost control of the car, went airborne and landed in the home.

McCrary said the son was in a bedroom and was pulled out of the wreckage first.

When Annette was pulled out of her bedroom by firefighters, she was still talking to everyone, McCrary said.

“When she got out on the stretcher, she gave us a thumbs up and said, ‘I’m OK,’” McCrary said.

Andreco Rush, 58, is the husband of the deceased.

He was in the living room watching television and dozing when the car hit, he said.

“It was terrifying. Couldn’t see; the power was out. Everything. It was completely dark,” Andreco said.

Then he saw the car and heard his family calling to him. He tried to get his family out of the bedrooms, and when police arrived, they helped. They were able to pull out his son. But they couldn’t get to his wife.

Andreco was still in his pajamas watching the home get boarded up about 10:30 a.m. He couldn’t go in to get his clothes.

He said they were married 35 years and had lived in the house their entire married lives.