The alumni of the Western School, from its days as a K-12 community school and as a high school, gathered together on Saturday for their first reunion in seven years.


It was a reunion delayed several times over the last two years due to the COVID-19 pandemic. Typically, the Western School holds reunions every five years for students, teachers, administrators and family members who had been a part of a school that was a pillar of the Welcome community for so many years.

Today, the Western School still houses instruction as Western Elementary School and has done so since 1973, but before then, students, teachers, administrators, coaches and parents all knew each other as part of a tightly knit community.

Throughout the day, alumni shared stories of their time at Western and enjoyed a fried chicken dinner from Wishbone Fried Chicken, while remembering those that had passed since the last reunion. 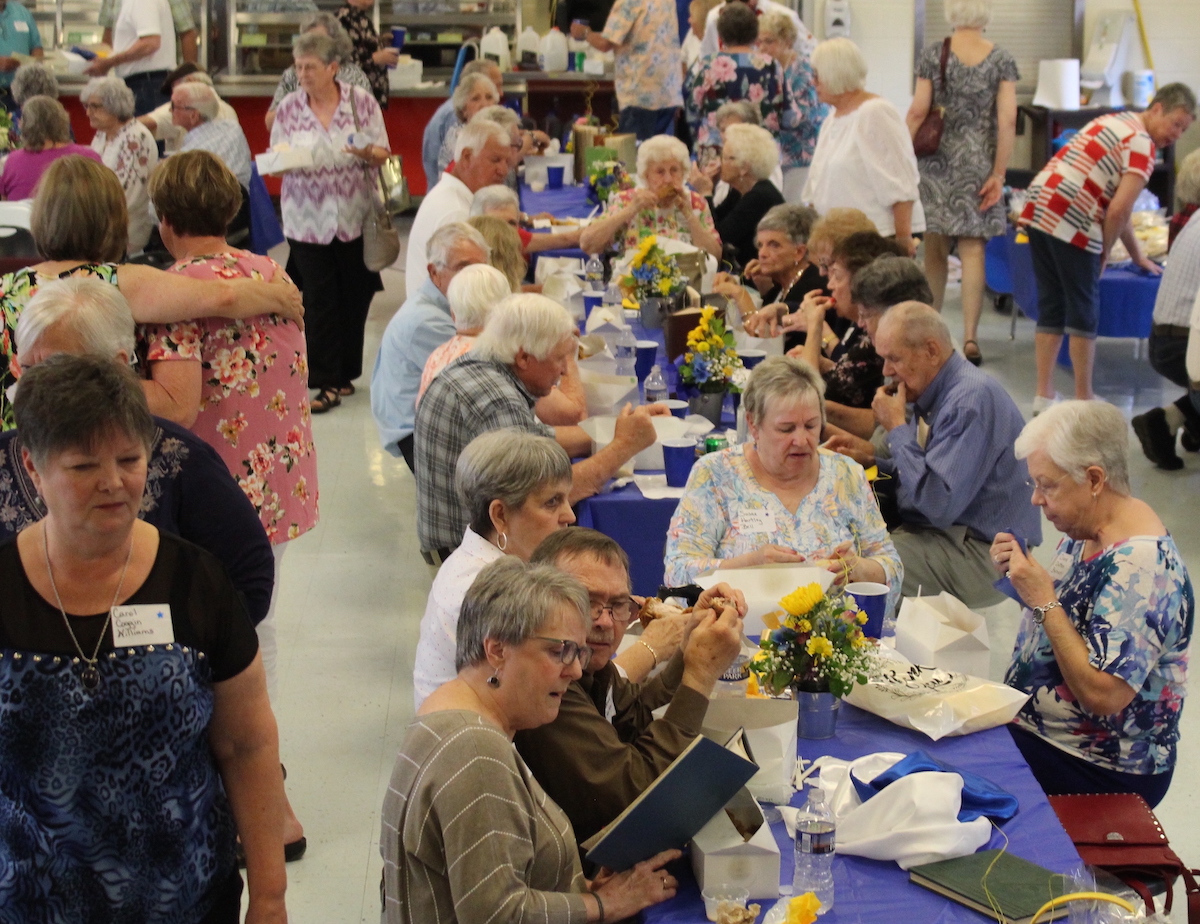 The Western School’s cafeteria was packed with former students, teachers and staff and their families as they told stories of what life was like at the school. (Photo by Joe Adgie)

The list of those passed was a long one. The cafeteria at the Western School, at one point loud with activity from alumni catching up, went silent as Joe Crain, Brenda Clark and Susan Rowe read the names of those that had passed away in the seven years that had passed since the last reunion.

There were other memorable moments during the reunion, such as Jimmy Wallace, a 1961 graduate of the Western School, transforming into the King, Elvis Presley, strongly resembling him from his 1973 concert in Honolulu. There was the Western School cookbook, on sale at the school, presented to Doris Wood, the daughter of longtime lunchroom staff member Christine Bonner. 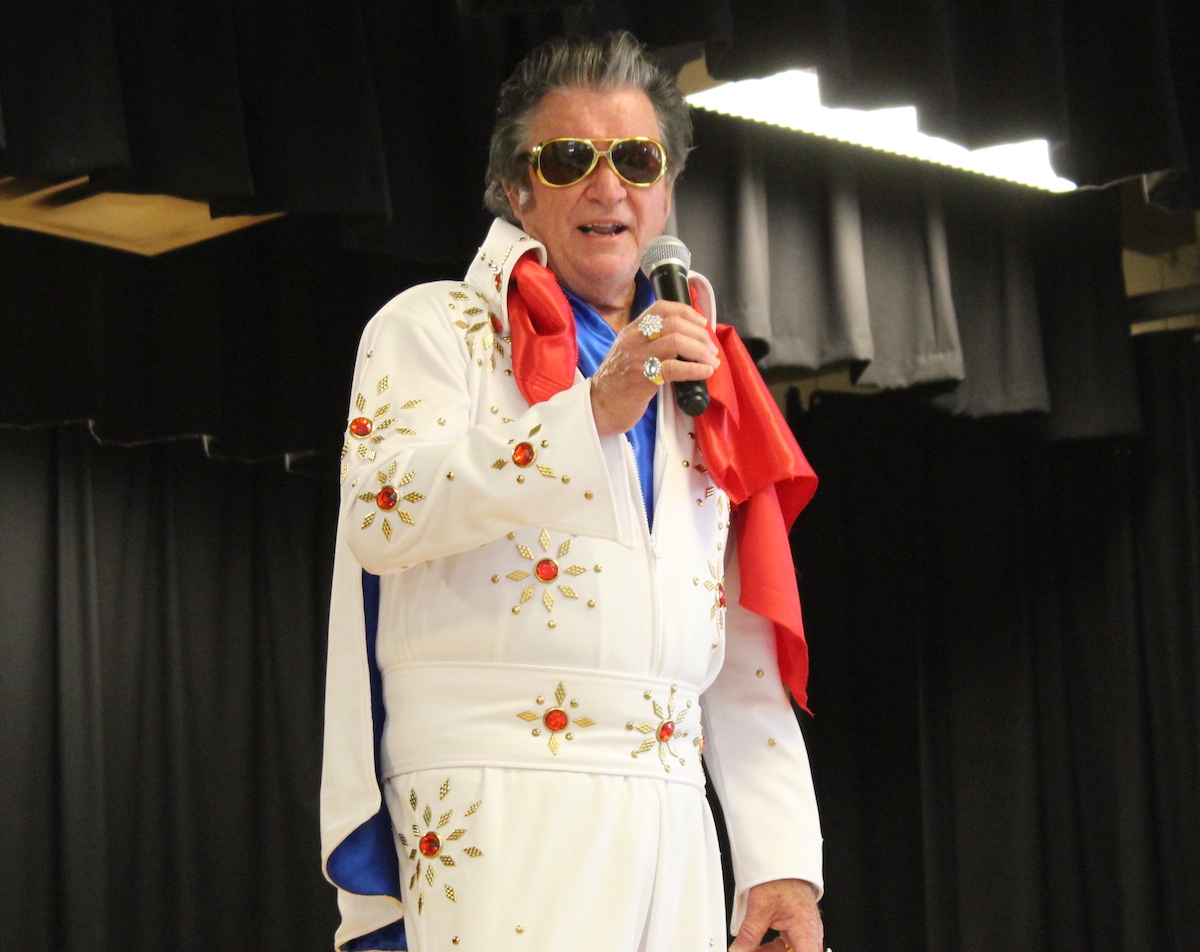 “Thank you, thank you very much.” Jimmy Wallace, a 1961 graduate of the Western School, became The King, Elvis Presley, entertaining his fellow alumni with some of Elvis’s greatest hits. (Photo by Joe Adgie)

To give some idea of the importance of the school to the community, Bill McKenzie, who graduated from Western in 1973, talked about how he went to summer school so he could graduate from Western.

“That was the last graduating class of Western High School,” McKenzie said. “They asked me to tell you how I got into that last class, because I was not supposed to graduate here.”

“You all remember Mr. Richard Smith, our English teacher?” McKenzie asked. “He was tough. Short summer school, but it was tough getting through that class. We graduated in 1973, and I wouldn’t exchange it for anything in the world. I love Western School. I love Western High School.”

Charlotte Cole: One of the last remaining members of the original Alumni Association

“There is only Joe Crain, Susan Rowe and Brenda Clark, that are the only ones from the original alumni association.” Cole said. “We started in 1992. Earl Colter was the principal here, and he helped us organize it. We have enjoyed every minute of it. It was a wonderful school then, we had wonderful teachers — they loved us, and back then, we grew up to respect our elders and the teachers, and they were good to us.”

Cole said that the Western alumni still carry a love in their heart for those that they went to school with over the years, and that they savor these reunions that are held typically every five years.

“It’s wonderful, because we see people we grew up with,” Cole said. “We have wonderful childhood memories. It’s just wonderful.”

Cole started her time at Western in high school after spending her elementary and middle school years at Arnco, Sargent and then at the Arnco-Sargent schools.

“We rode the bus. I started at Arnco, and I walked to school. So they ended that after the first grade, and our first grade teacher, Martha Williams, had us, the first graders and the second grade in the same room. The second year, we went to Sargent. We were at the old school over there until Christmas, and then they had Arnco-Sargent built, and after Christmas, all of us that went from Arnco to Sargent went to Arnco-Sargent as Mr. E.B. Jones as principal.”

Arnco-Sargent went to the 8th grade, and Cole said students had a choice — either to go to Newnan High School or to go to the Western School. Half chose Newnan while the other half chose Western, she said.

Cole said over 100 names were read in honor of those that had passed away.

One of the last graduates of the Western School was Buster Meadows, who graduated from Western during the final year of its run as a community school in 1973.

From there, he went to the Newnan Police Department, where he climbed up the ladder until retiring as police chief in 2021.

Meadows recalled a school where everyone knew everyone.

“You knew everybody, because everyone was in this area. Families grew up together.”

Meadows shared a story from when he and his class got their rings, a story about how they took the principal on a chase around the school.

“They had a bus that stayed out parked out front,” Meadows said. “We all went to the bus. Here comes the principal. As soon as we got on the bus, we started saying the Pledge to the Flag. Then he told us we had to go back to class. We all came off the bus, in the front door and out the back door, here he comes by, so we start praying. We get done, he says we got to go back to the classes now, we’ve had our fun, go back to class. So went back in the back door and we went in the bathroom. He didn’t come in there. But he was waiting on us so we went back to class.” 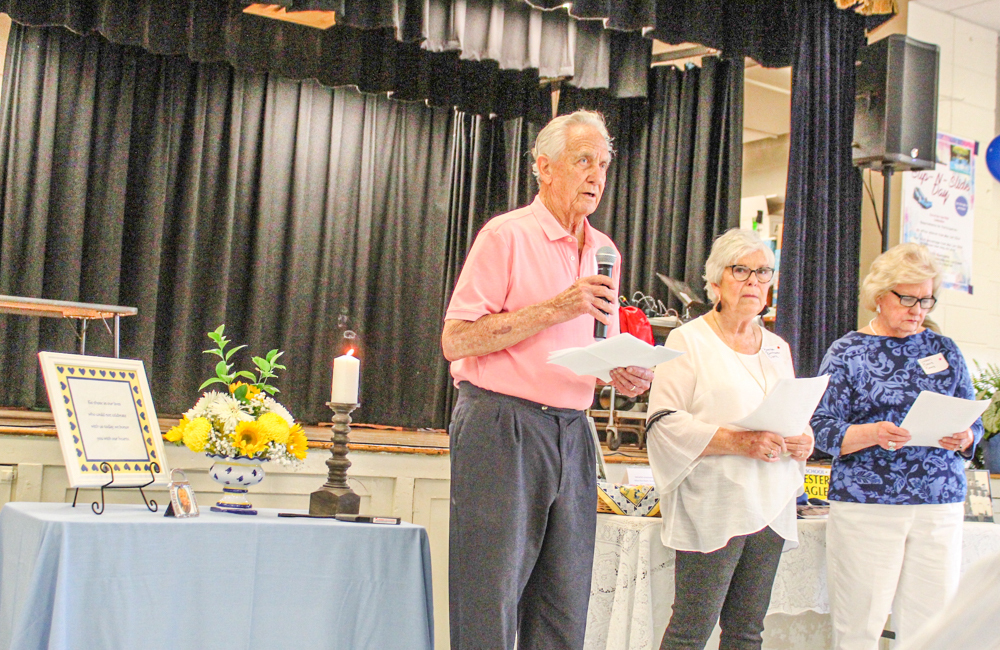 Near the end of the evening, Alumni Association members Joe Crain, Brenda Clark and Susan Rowe read the names of those that had passed away in the seven years that had passed since the last Western reunion. 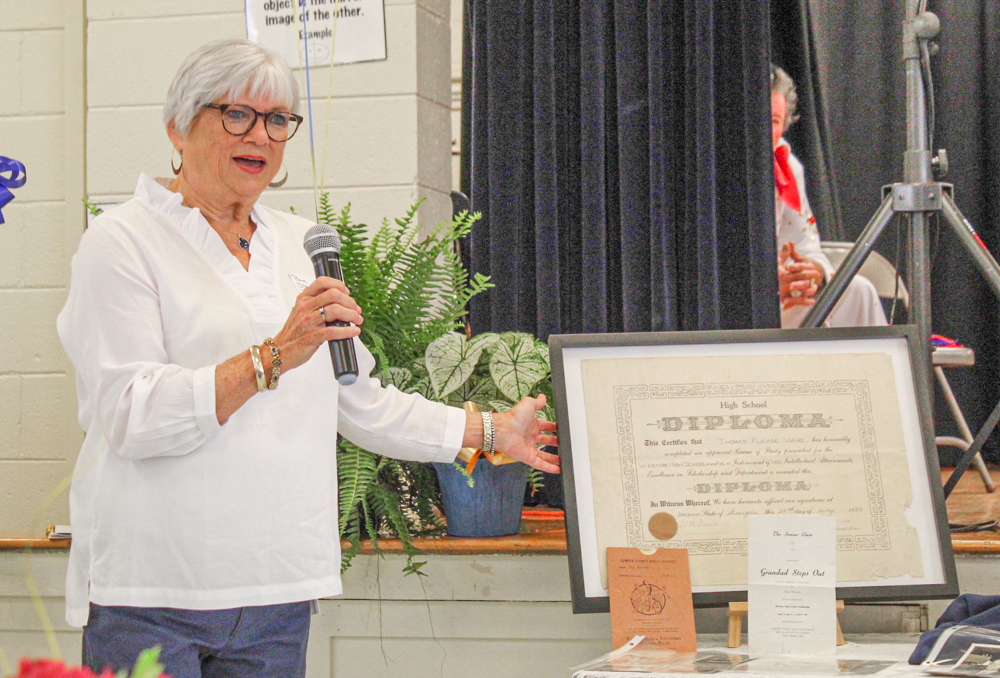 Included with some of the memorabilia at Western was a high school diploma from 1933, shown off by Pam Beavers. 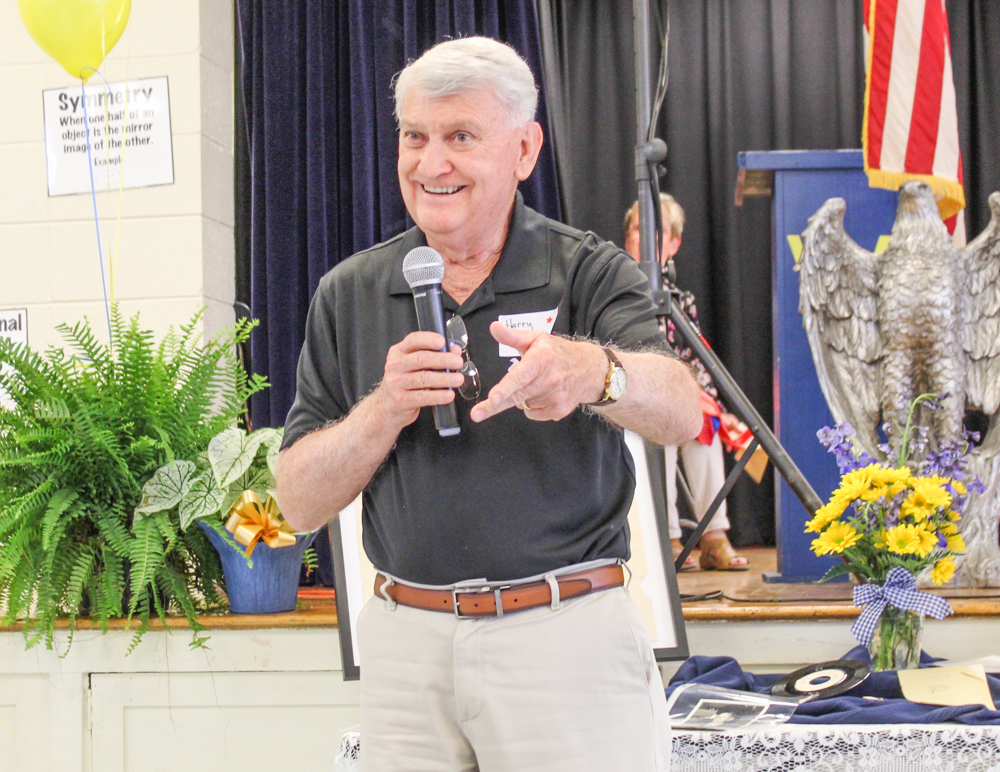 Harry Bridges tells stories to those on hand about his time at Western. 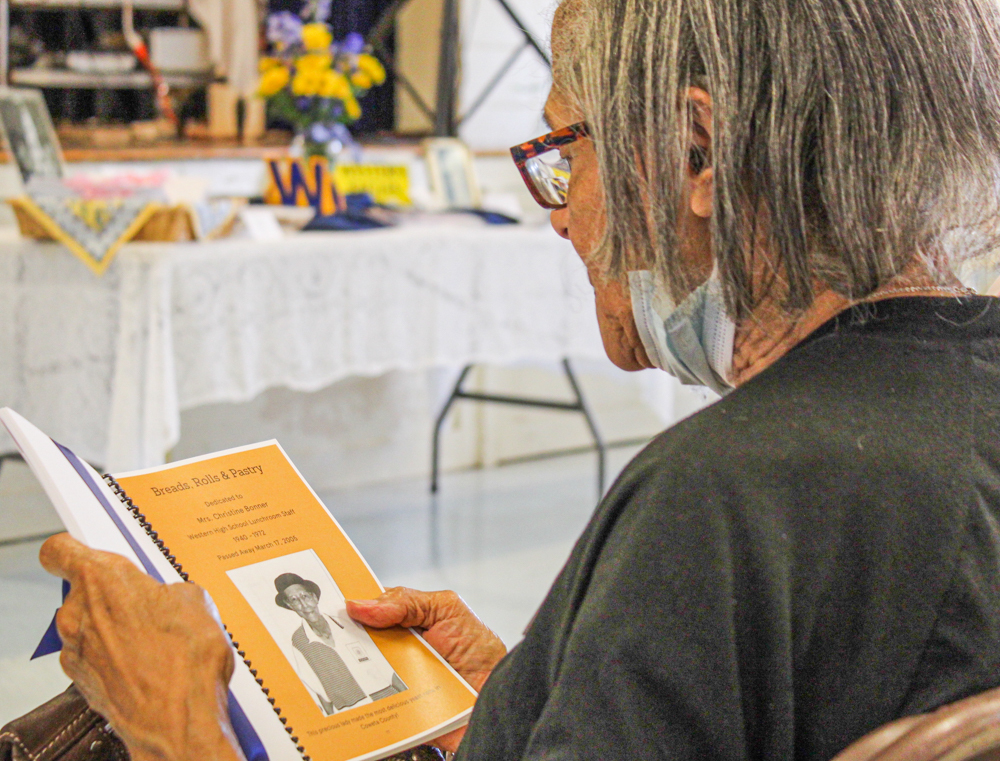 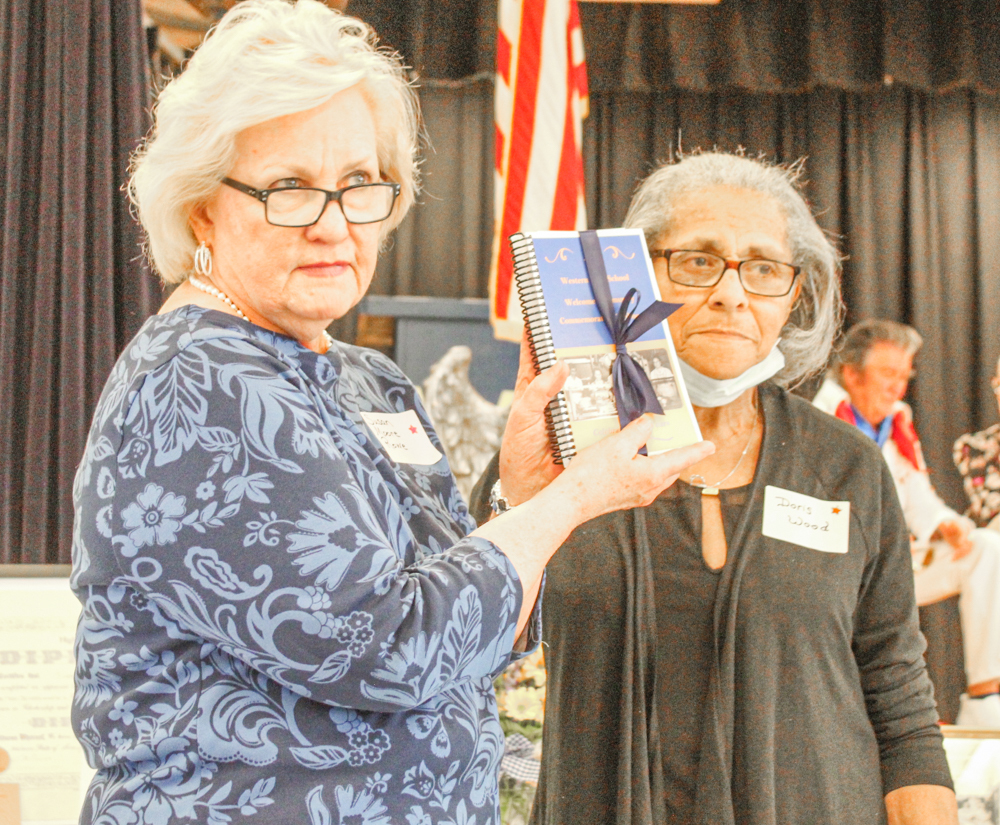 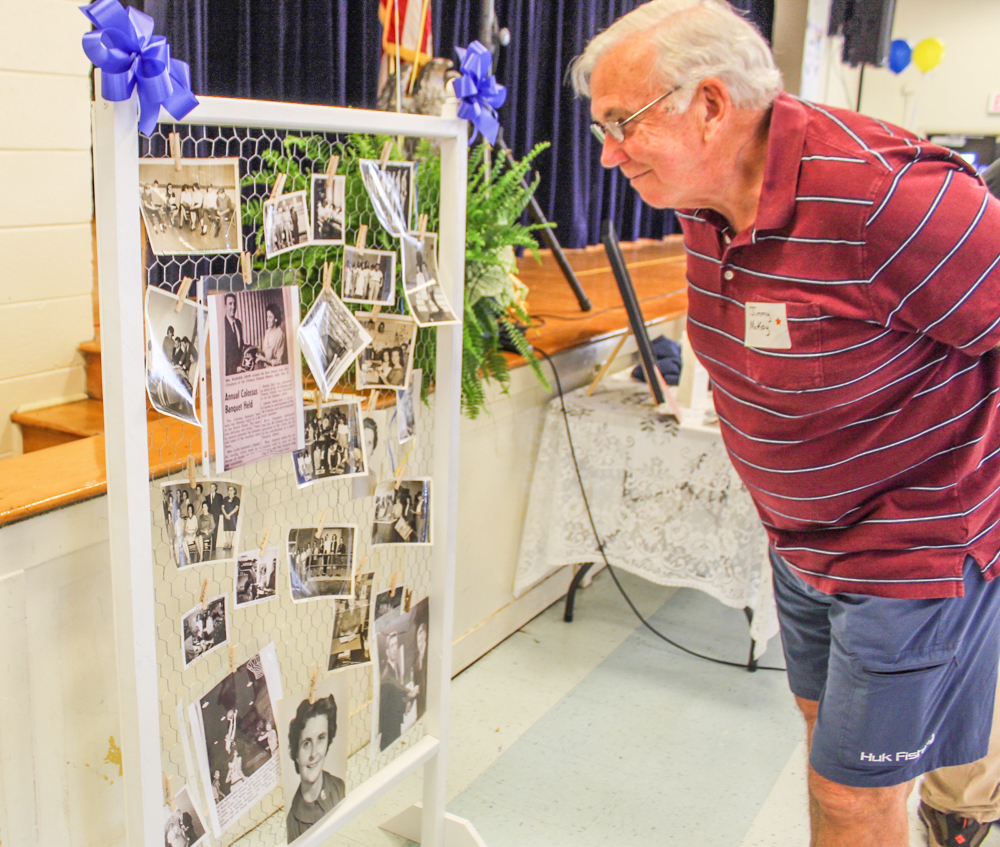