The 10th-ranked Newnan Cougars season has trended upward since an early March loss to Lassiter. Since then, the Cougars have won 21 of 26 games, captured a Region 2-7A championship, and swept their first-round playoff opponent. The formula has been great pitching and timely hitting.

The Cougars welcomed the Mountain View Bears to Joe Pope Field for the second round of the state playoffs. It was a rematch of a two-game series the teams played on the Monday of Spring Break.

The two teams split those games, but on Tuesday, the Cougars swept the Bears to advance to the third round.

Drew Ellsworth started Game One of the series. After two perfect innings, the Bears scored the game’s first runs on a wild pitch and some errors. The 2-0 deficit did not last long.

The top of the Cougars lineup started the first of multiple rallies during the series. Junior Garrett McGree and sophomore Wills Maginnis got the party started. After a single by Thomas Scott, a successful squeeze play by Hunter Snyder, a triple by Jaxon Dennis and a hard-hit single from Cole Kennedy, The Cougars were up 5-2.

The Bears refused to hibernate. They chipped away with two runs in the top of the fifth from the speed and bat of Mountain View’s Malachi Jefferies. A Bears home run off the bat of Thomas Murcia tied the game up.

The Cougars responded with another rally that gave the scoreboard operator a lot to do in the bott of the sixth. After Newnan loaded the bases, Scott drew a walk to retake the lead, followed by a Snyder line drive that scored two, and the Cougars were on their way to a seven-run inning and went to the last inning with a 12-5 lead.

Chasin Cash was "money" in the seventh as the Cougars closed out Game One.

While the first game brought in offense, the second provided entertainment with great pitching. Tyshon Patty started for the Bears while Chapman Ward took the ball for Head Coach Marc Gilmore's Cougars. Ward has been the stopper coming down the stretch with multiple strong performances in the most pressure-filled moments.

In a 1-1 game, Patty took a no-hitter into the seventh innings for the Bears. The Cougars' only run came when Yancy Dunn was hit by a pitch and scored on a sacrifice.

Kage Bossman got the first Cougars hit of the game in the seventh, and McGee followed with another. A Wills Maginnis walk loaded the bases, and Bossman scored the go-ahead run on a wild pitch.

The Cougars scored three more; a walk by Scott and a two-run single from Snyder, and Newnan had a 5-1 lead and only needed three outs to close out the series. Ward shut the Bears down in the seventh to complete the sweep.

Ward turned in another clutch performance, a complete-game four-hitter with six strikeouts.

The victory earned the Cougars the opportunity to host the Woodstock Wolverines (27-7) in the third round of the playoffs. The series starts with a doubleheader on Monday afternoon at Newnan. 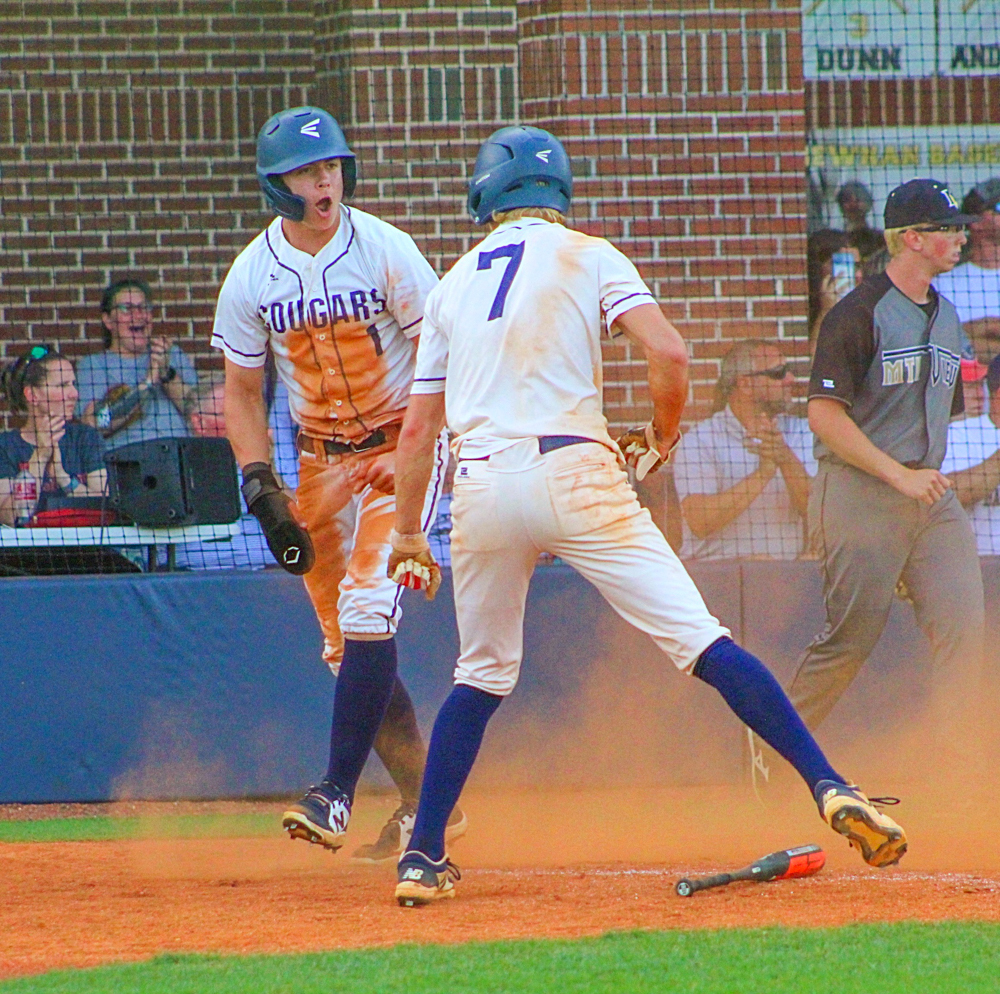 After scoring on a Hunter Snyder hit, Brady Bowman (No. 1) and Wills Maginnis (No. 7) celebrate. 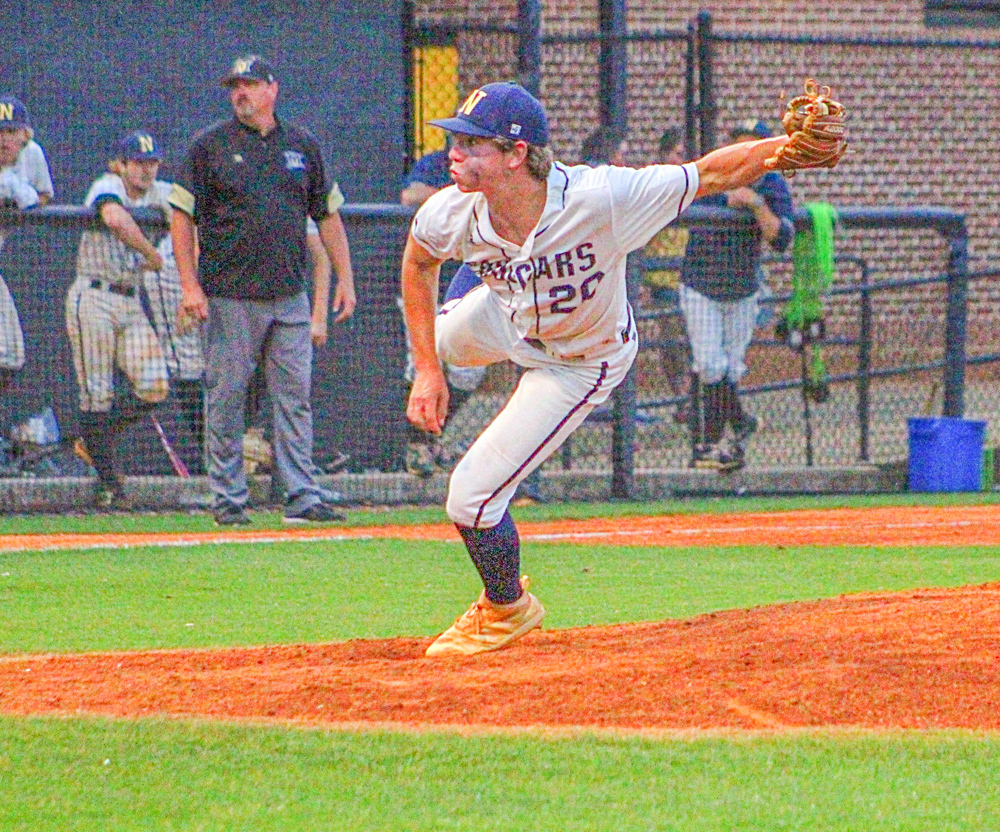 Chapman Ward (No. 20) pitched a complete game to clinch the series in Game Two. 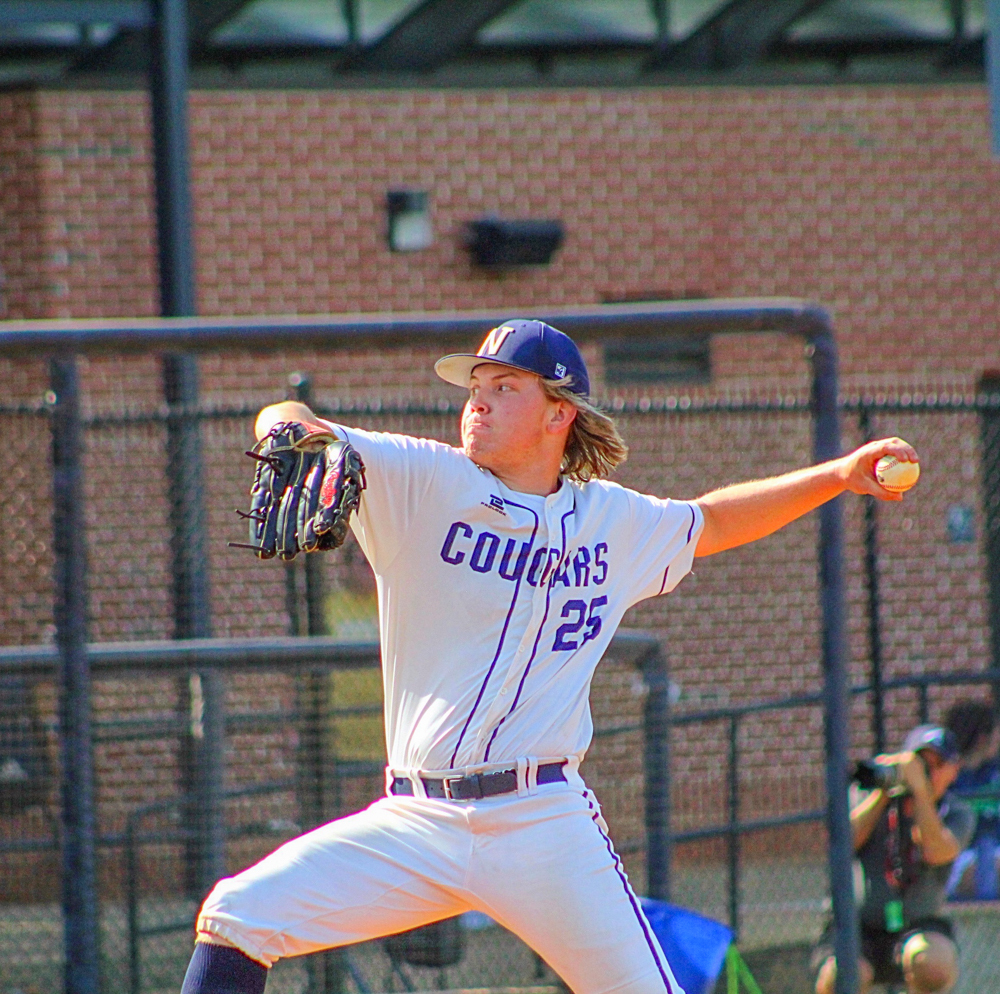 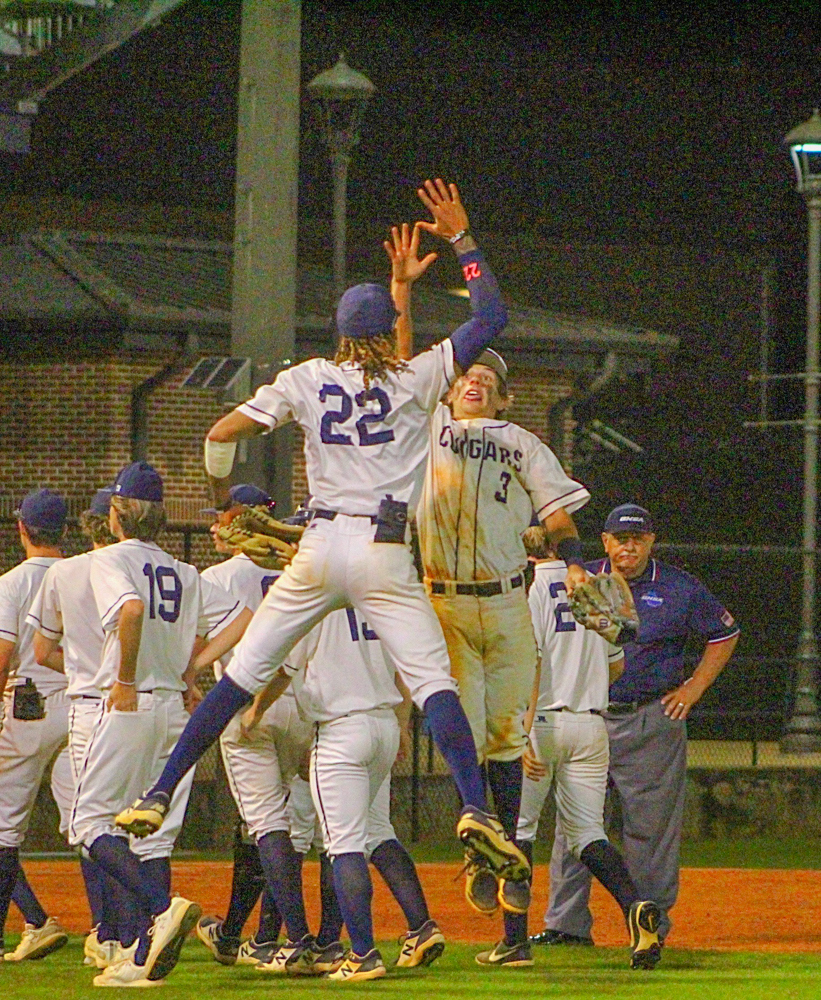 Yancy Dunn (No. 3) and Jayden Freeman (No. 22) celebrate the playoff wins. 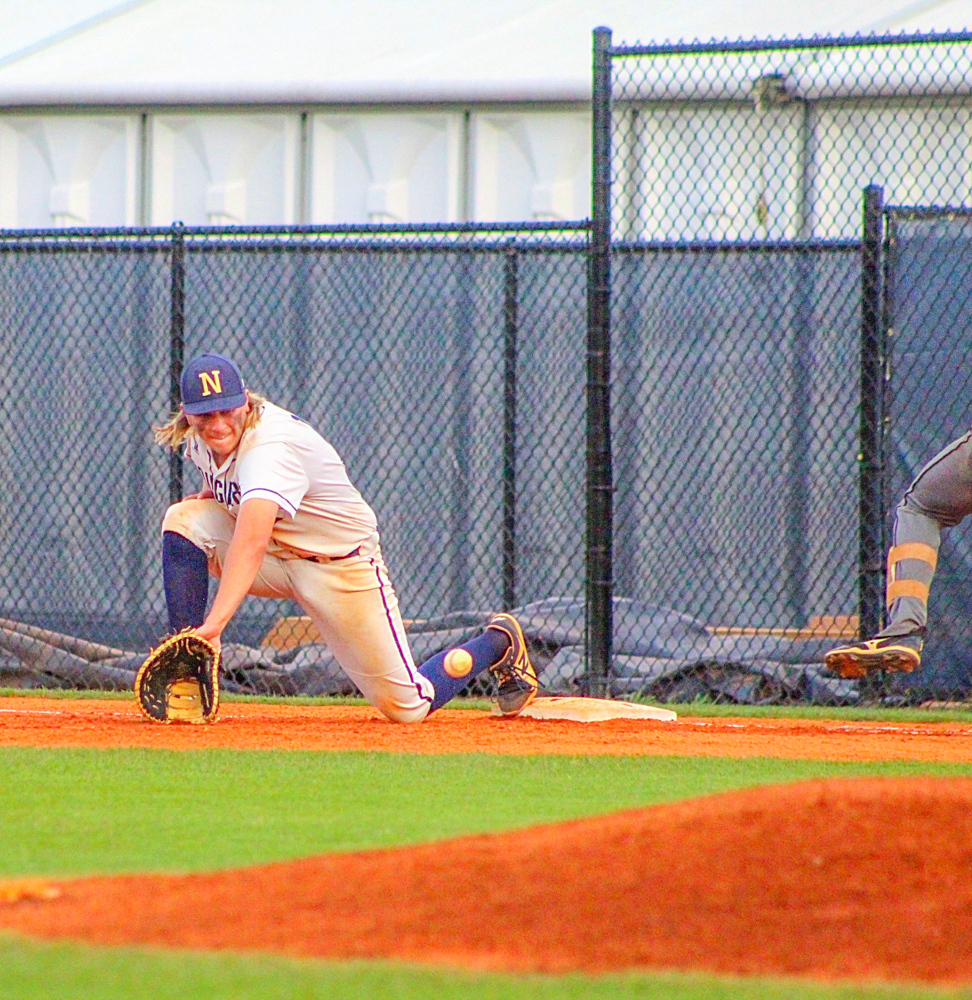 Chasin Cash (No. 10) is money on this scoop at first base. 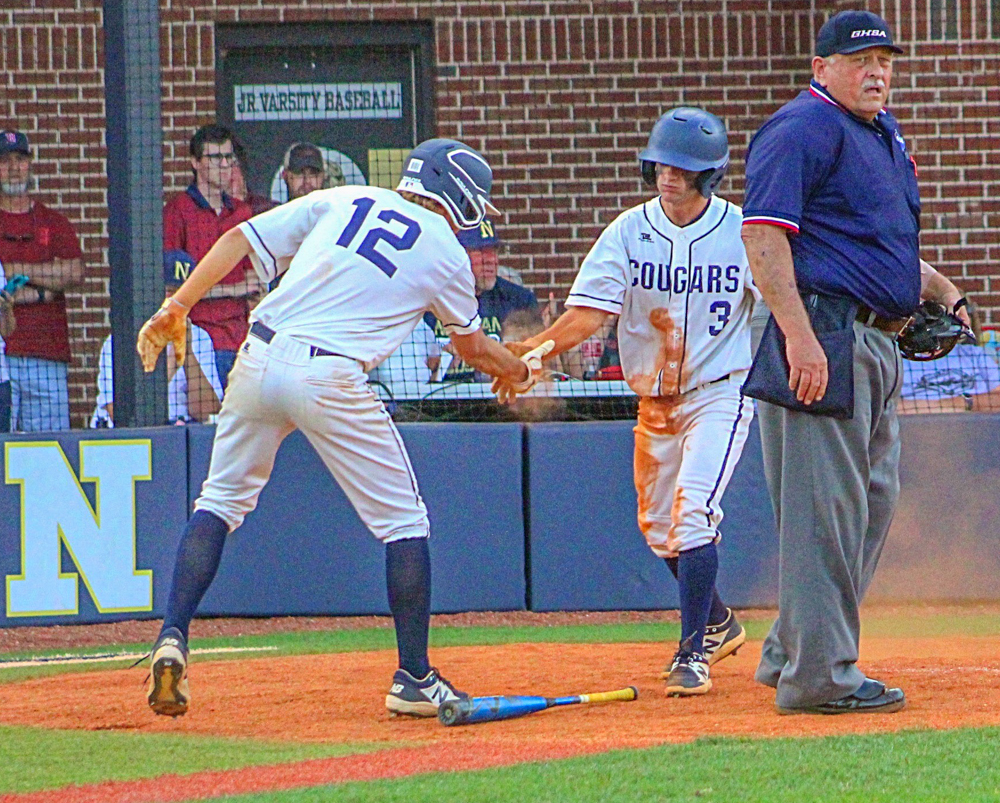 Cole Kennedy (No. 12) congratulates Yancy Dunn after they both scored on a Kage Bossman hit. 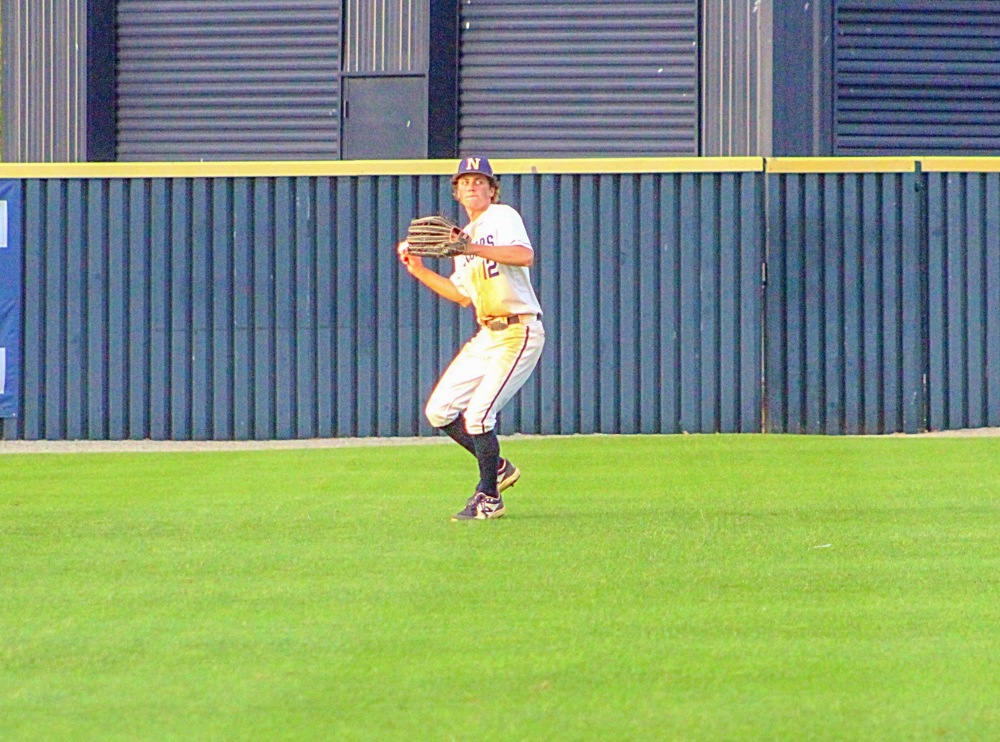 Cole Kennedy (No. 12) prepares to make a throw from the outfield.