Over the hills and through the woods, cyclists tour Coweta County

Hundreds of cyclists of all ages took advantage of textbook spring weather to tour the backroads and trails of Coweta County last weekend.


Over 500 cyclists ranging in ages from 3 to 81 years old from 11 different states participated in events like the “Tour of Coweta” ride and “Rockin in a Squirrel World” mountain bike race at Brown’s Mill.

At 8 a.m. Saturday, riders left the Welcome Community Center and embarked on the second annual “Tour of Coweta” event. Participants had the option of 25-, 45-, 65- and 100-mile rides. Riders had rest stop options in Grantville, Moreland, Senoia and Haralson before returning to Welcome.

The ride was a major success due to the effort of Rotarians who rose early to ensure every aspect of the event was covered, according to Jay Boren, president of the Newnan Rotary Club.

“This was the result of hours of preparation and planning and we received very positive feedback from our participants,” Boren said. “When it’s all said and done, we expect to raise over $30,000 that goes directly back into our community through scholarships, grants and our 4th of July Fireworks event.”

After the ride, many riders made their way downtown for the “Rock and Road” festival — an all-day celebration hosted by Bike Coweta featuring live music performed by Leonard Washington and Crossroads Rebellion on the Court Square, along with a live DJ spinning classic rock, vendors and bounce house.

The festival also coincided with Record Store Day and Vinylite Records Owner Jesse Yates said the annual event, now in its 15th year, saw the strongest turnout yet for his store.

“We had people camping out the day before just to have a chance to get a Taylor Swift single, and having the all-day festival really worked out well for what we’re doing,” he said. “We’d always wanted to have an event to coincide with Record Store Day, but with the DJ and the live bands, it all tied in and worked out well.”

Rotary also partnered with local businesses such as The Mad Mexican, Redneck Gourmet, Leaf and Bean, Frios Pops, Cakes by Debby and ACE Beer Growlers, who provided refreshments and food for the riders.

Newnan Mayor Keith Brady was among those who rode in the event and said he’d like to see the ride start and end in downtown Newnan next year. The inaugural ride in 2021 was set to leave from downtown but had to be rerouted to the Welcome Station due to the catastrophic aftermath of the tornado.

“I think it’s a reach to expect people to finish the ride in Welcome and have them get in their car to come downtown for festivities,” Brady said. “I think if they can leave out of downtown next year and return for the festivities, there’s going to be some real excitement and you’ll see a bunch of people sticking around for more.”

At Brown’s Mill, riders of all ages showed up Sunday morning to take their shot at racing their mountain bikes on the trails.

GoNuts Cycling hosted their “rocking in a squirrel world” mountain bike event featuring riders as young as 3 years old who enjoyed a chance to show their stuff on the course.

However, the stars of the show were Will McConnell and Tina Morris who earned the “Rock Star” trophy after completing both the 100-mile ride on Saturday and then finishing first in their category during the mountain bike race on Sunday.

Chris Doane of Bike Coweta and the Newnan Rotary Club helped organize the weekend and said the success of the events showcases the demand for cycling in the community.

"Bike Coweta is extremely grateful for the organizations that partnered with us this year to host this event,” Doane said. “ The positive impact of this year's Rock & Road Festival was felt in many ways. Local businesses benefited and the Rotary Club's community projects and grants program will benefit. Most importantly the event encouraged health and wellness for hundreds of visiting cyclists and locals, too." 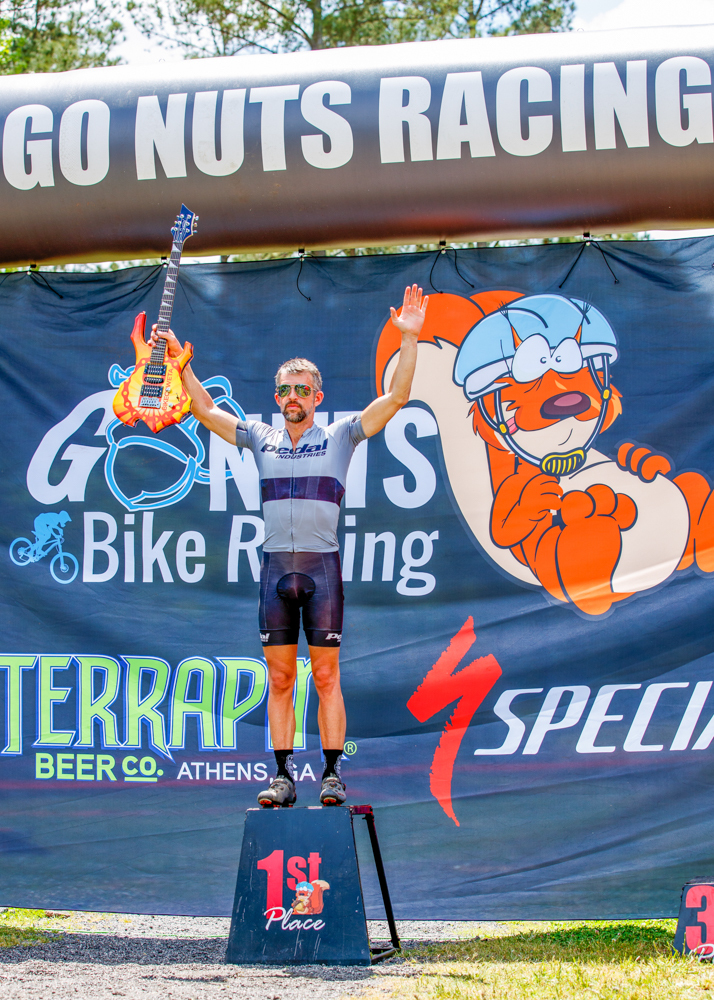 Will McConnell earned the “Rock Star” trophy after completing both the 100-mile ride on Saturday and then finishing first in his category during the mountain bike race on Sunday. 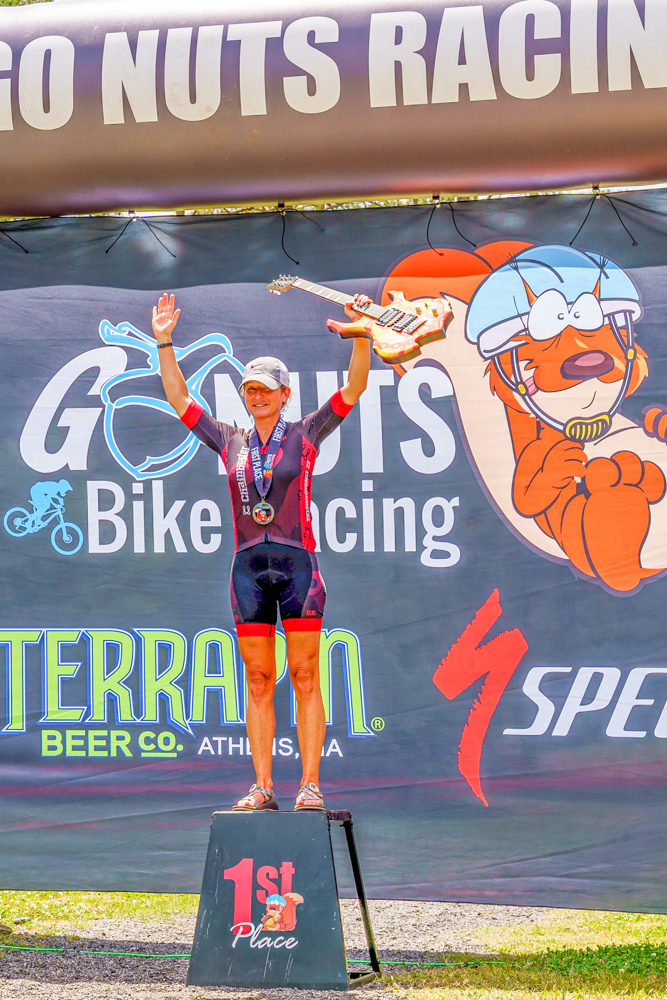 Tina Morris earned the “Rock Star” trophy after completing both the 100-mile ride on Saturday and then finishing first in her category during the mountain bike race on Sunday. 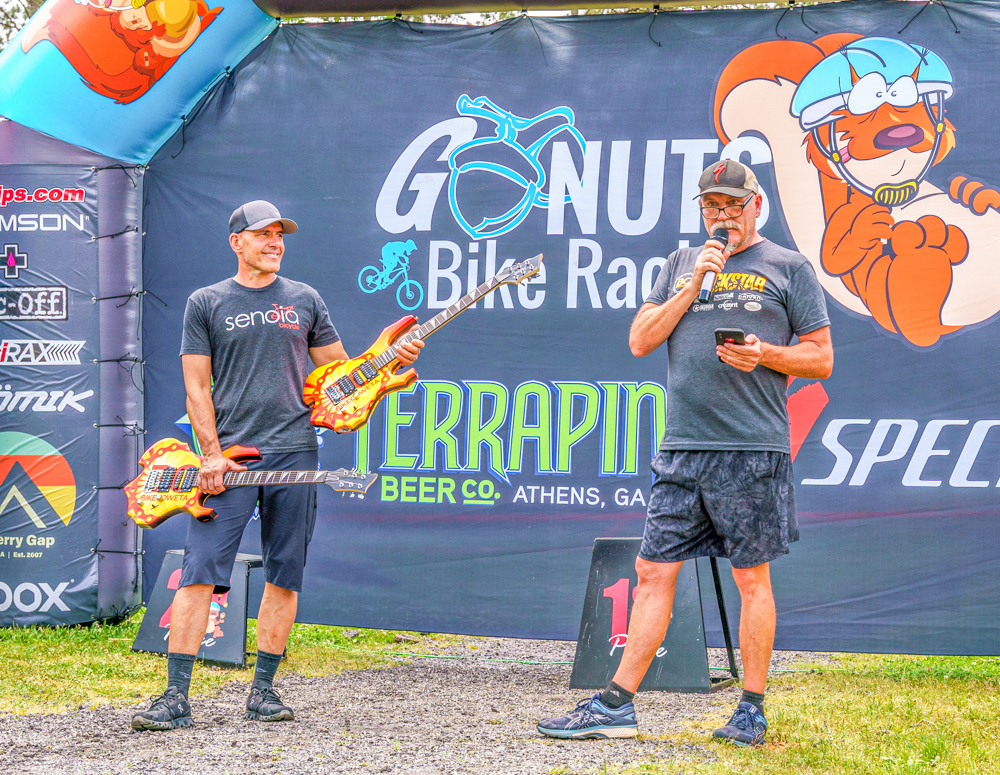 Carter Schmeck and Chris Doane announce the winner of the 2022 “Rock Star Award,” recognizing those riders who finished the 100-mile ride on Saturday and then finishing first in their category during the mountain bike race on Sunday. 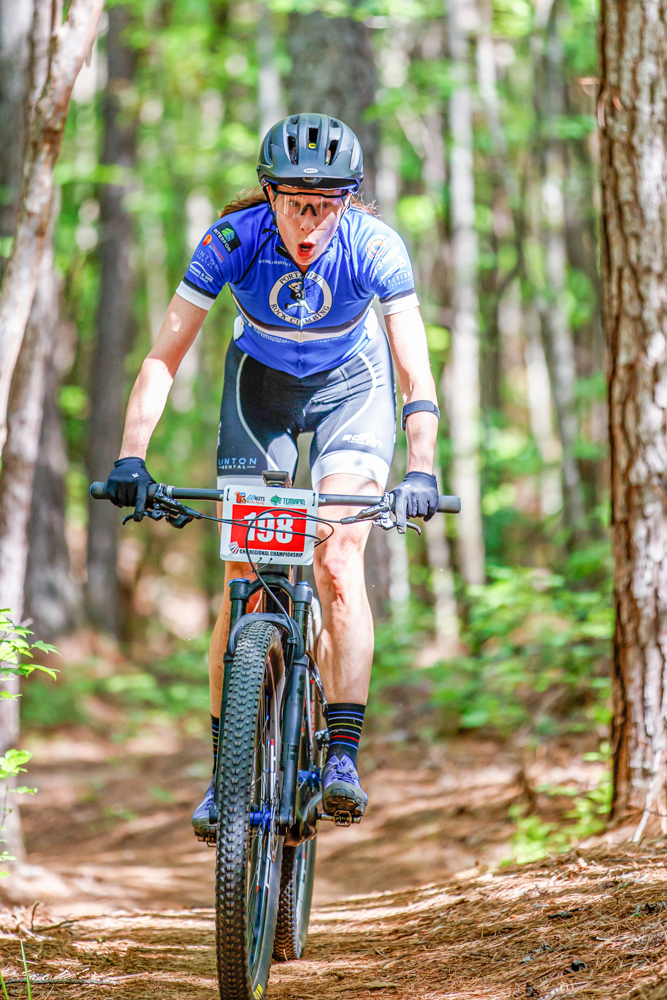 Melissa Whitley barrels down the trail at Brown’s Mill during the “Rockin in a Squirrel World” race on Sunday. 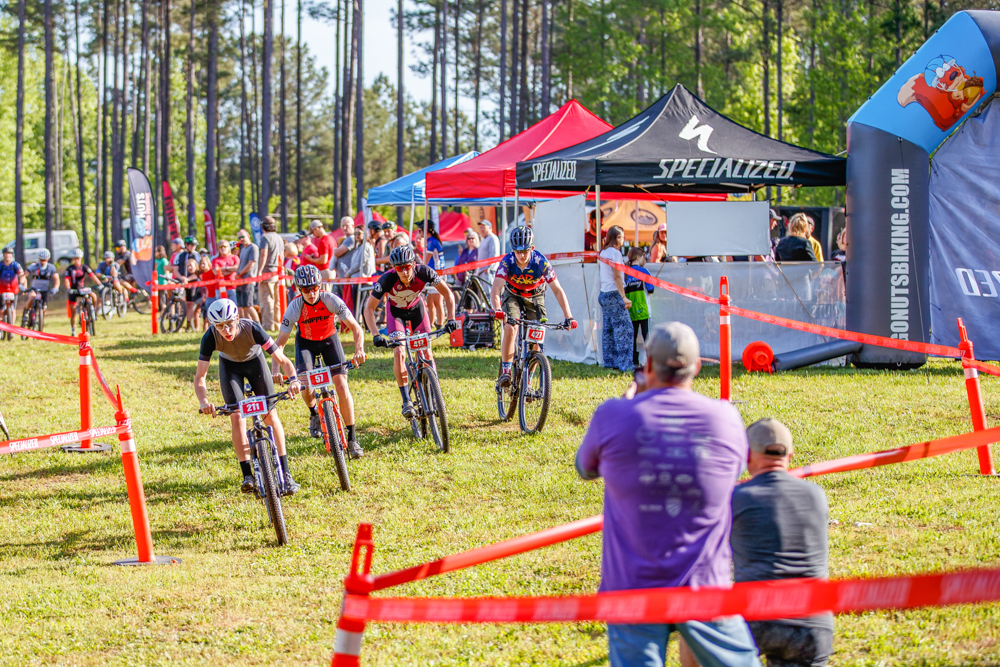 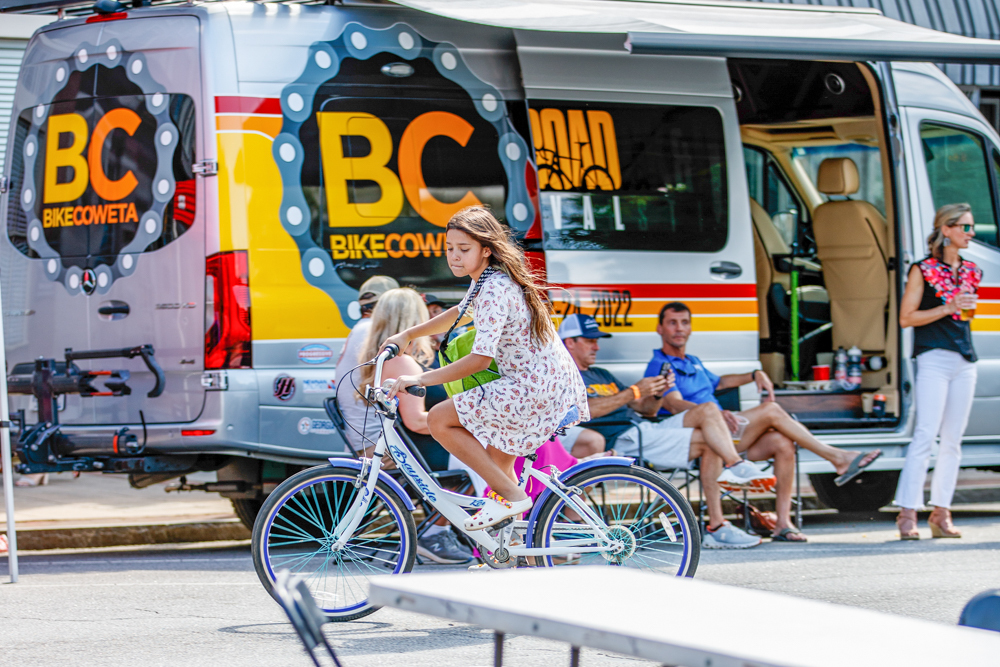 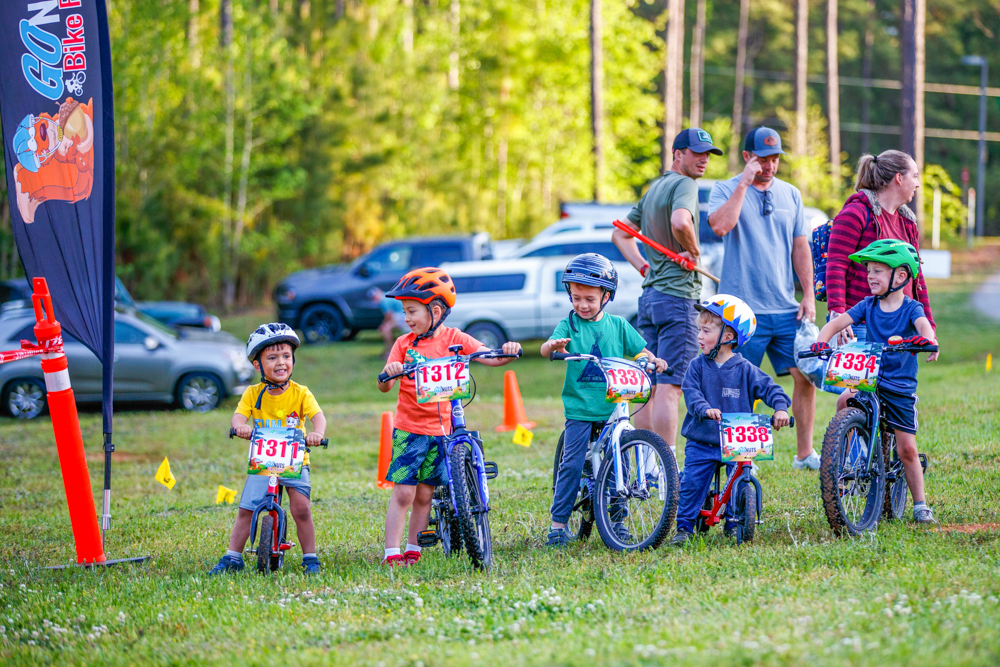 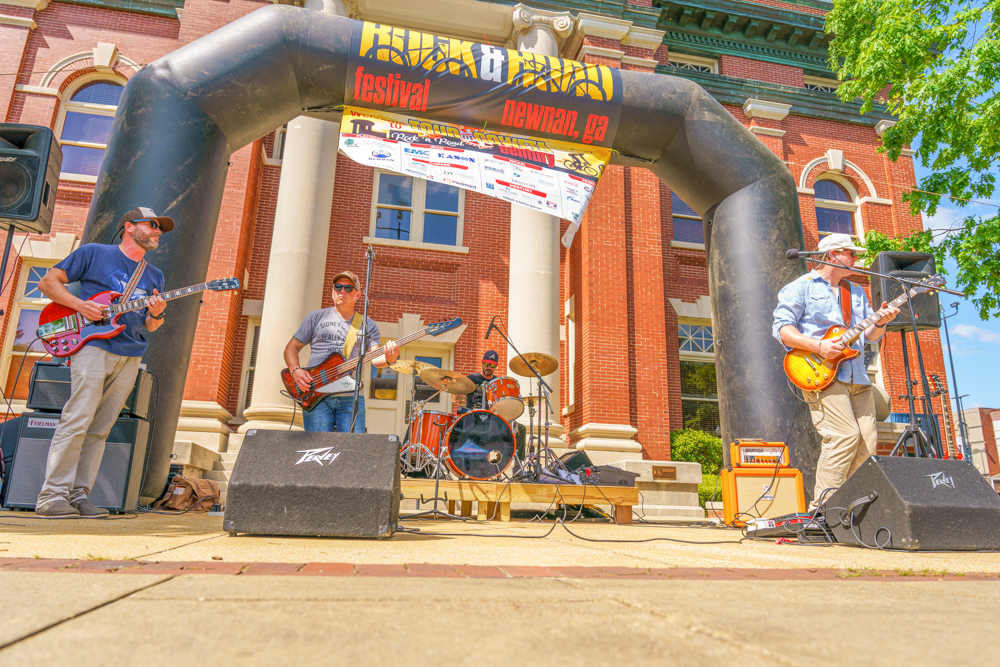 Leonard Washington lays down the groove during the Rock and Road Festival held on South Court Square on Saturday afternoon. 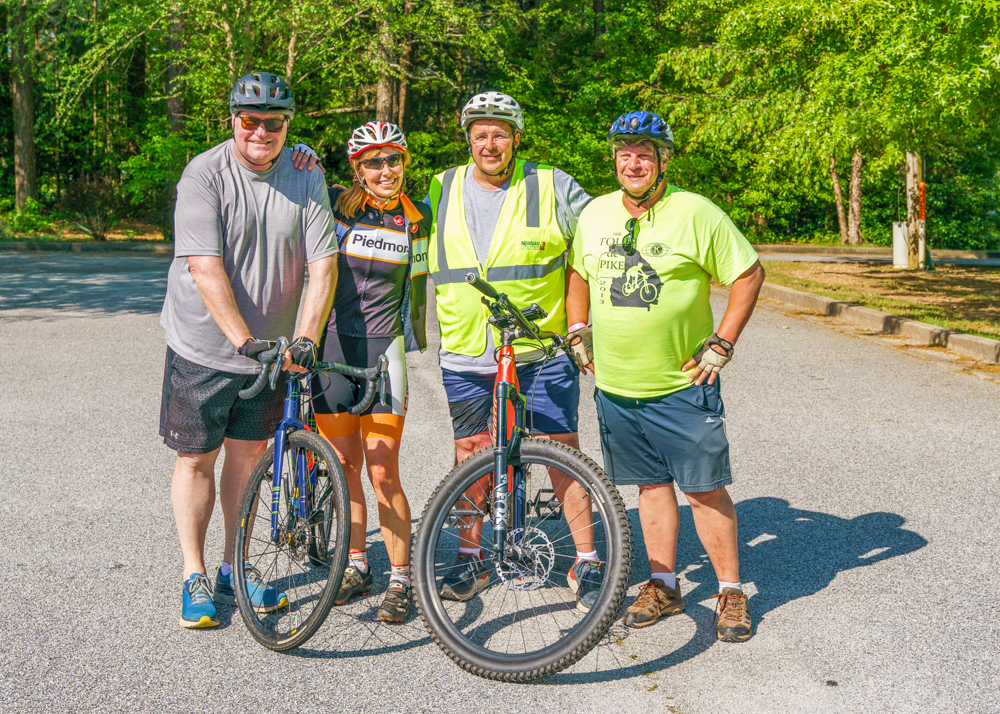 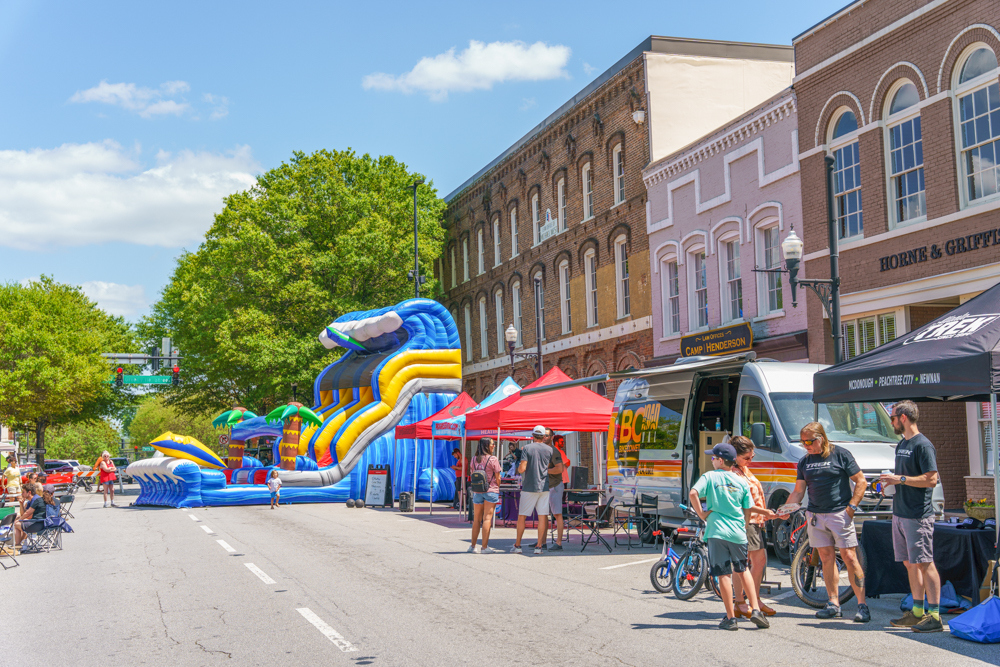 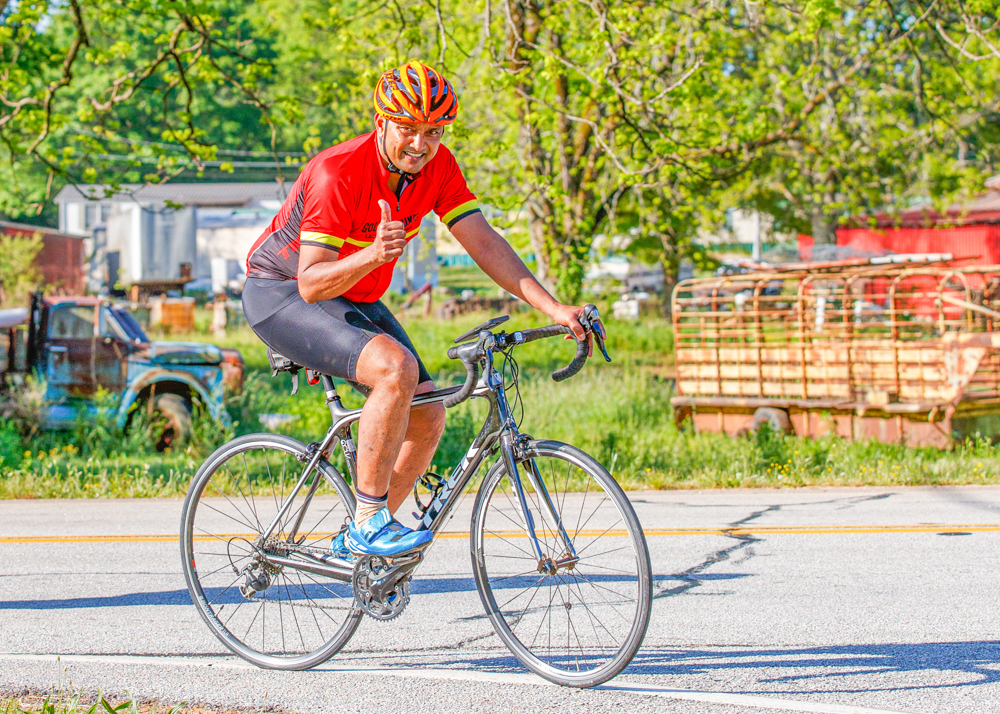 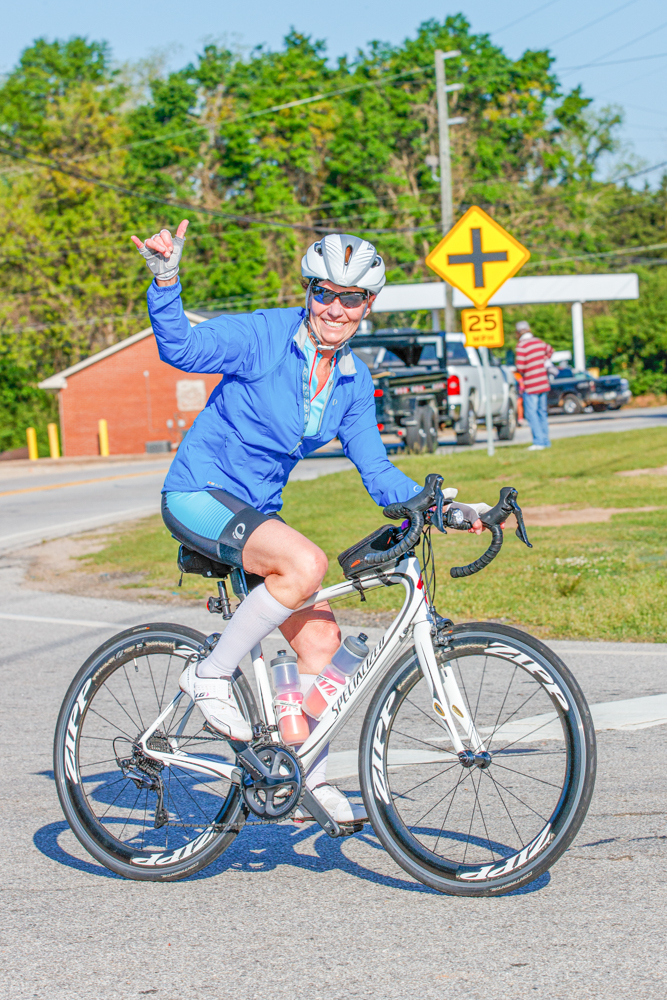 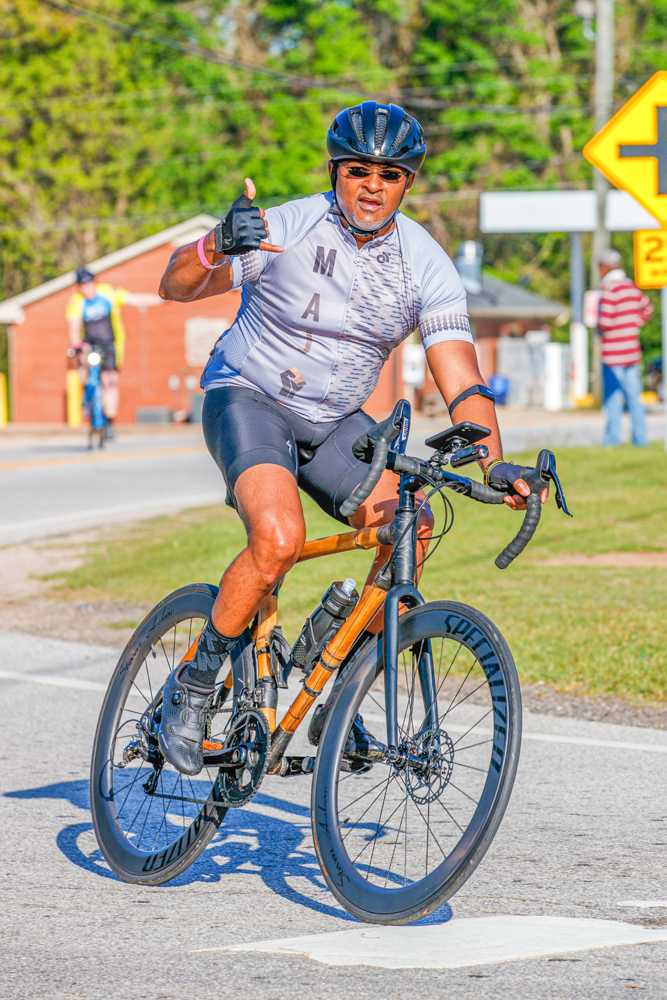 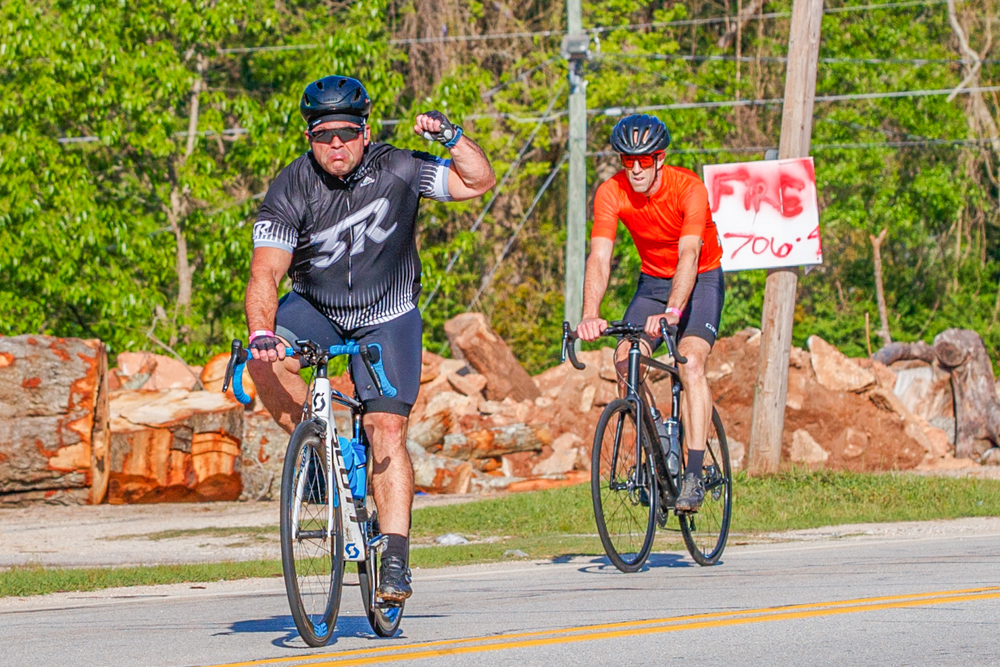 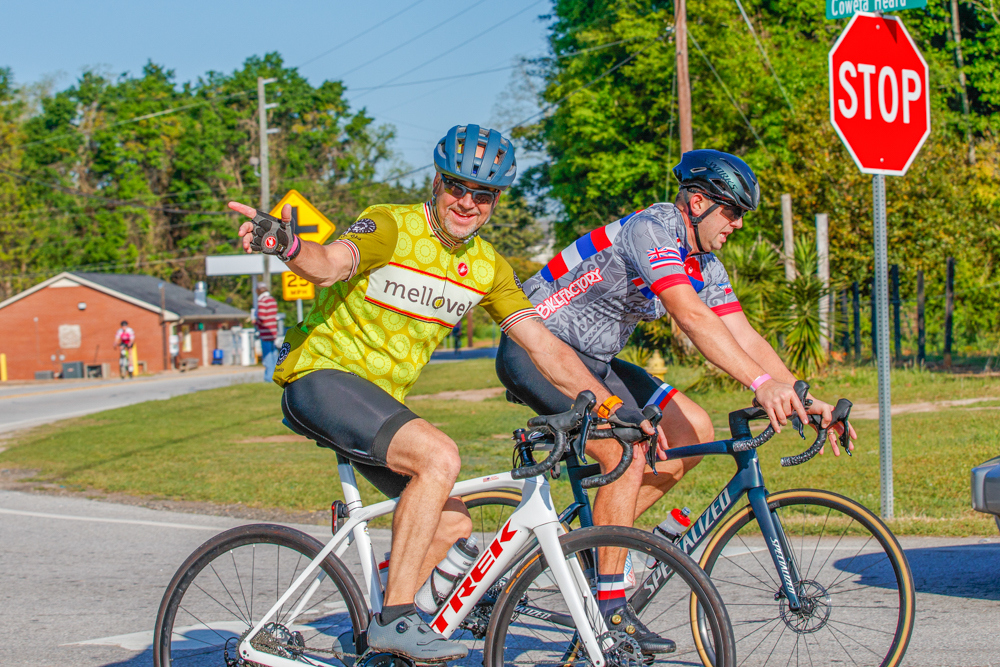 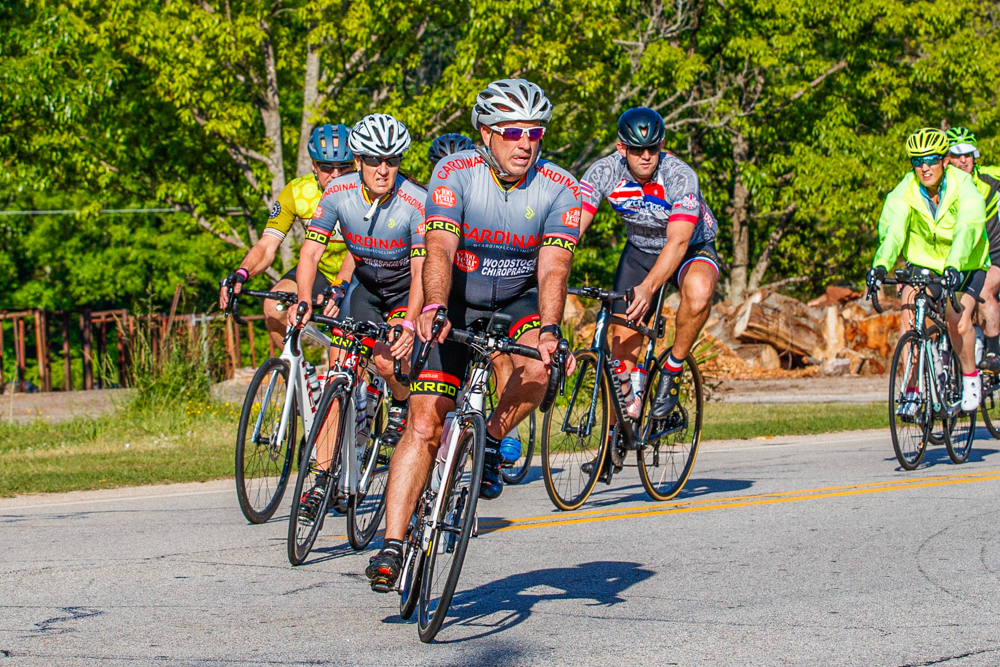 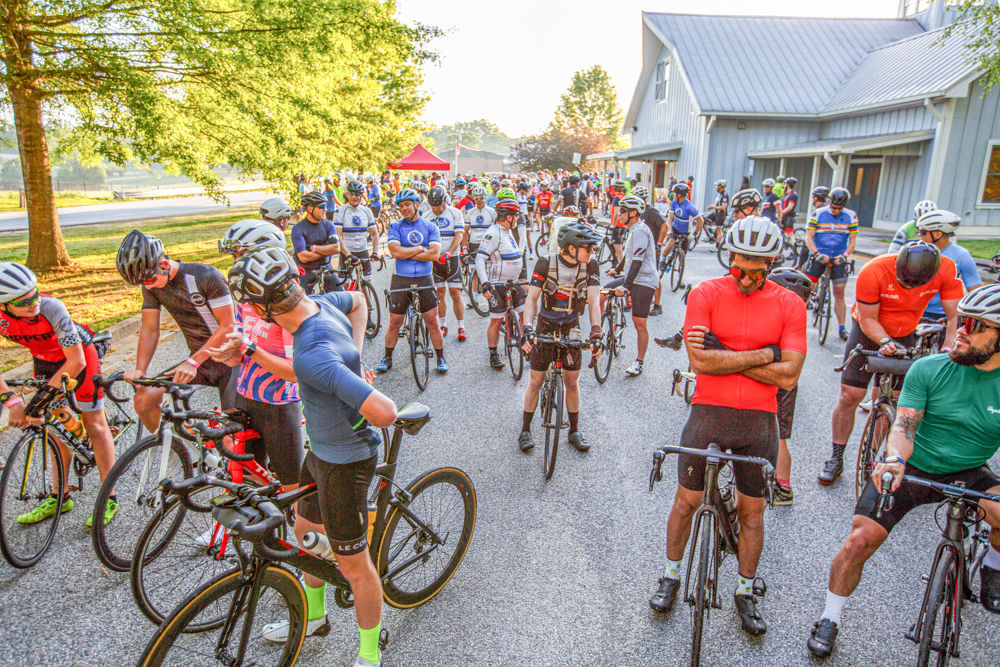