Grantville will not provide premium pay for former employees

With a 4-3 vote, the Newnan City Council approved the annexation and rezoning of land on Poplar Road, clearing the way for a controversial mixed-use project across the street from Piedmont Newnan Hospital.

The move will annex around 42.2 acres of land into the city of Newnan, as well as rezone it to MXD, or Mixed-Use Development District, paving the way for the project.

The vote disappointed many on hand at Tuesday night’s meeting, who came out in opposition to the project. In fact, many brought signs opposing the project, asking the Newnan City Council to vote it down. However, Mayor Keith Brady informed those on hand that signs were not permitted.

According to John Wieland, whose firm will be responsible for the townhomes, the homes will be upscale facilities.

The hotel, too, will be a higher-end hotel, with rooms starting at $250 per night, said John Schupp, a principal with Avison Young, a real estate firm working on the project.

The multi-family units will be constructed by Greystar, which is the sixth largest contractor for multi-family housing in the U.S., with over $1.25 billion in multi-family projects either built or proposed. Schupp said that Greystar viewed the south metro area as an opportunity for them.

Tax Abatement: Could this new project cost the city, the county and the schools?

While it had not been discussed in previous city council meetings, and while it did not come up for a vote on Tuesday, plenty of discussion surrounded a possible 30-year tax abatement for the project.

According to Hasco Craver, Newnan assistant city manager, no proposal for a tax abatement has been submitted to the city by the developers. The only decision made by the Newnan City Council at their meeting on Tuesday was to approve the annexation and rezoning of the land for the Poplar Place mixed-use project. 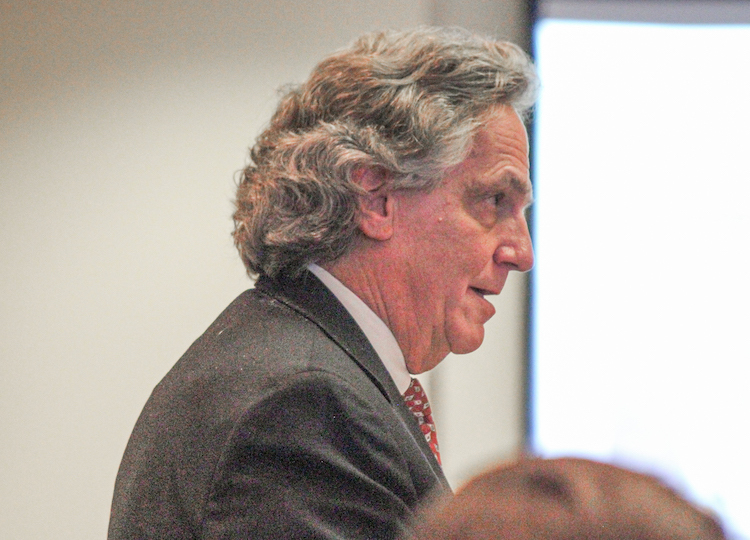 Coweta County officials confirmed on Thursday morning that they had not received a final version or formal request to consider a tax abatement for the property.

According to Michael Fouts, Coweta County administrator, county staff and the Coweta County Development Authority have received previous drafts of the Poplar Place proposal, along with financing proposals, but those plans had changed over the last year.

Schupp said that a tax abatement was being sought that would lower the tax bill for the mixed-use development for that period of time.

“Based on a current model — a preliminary model, not a final model — on the average, the total yearly revenue stream received by the city, the county and the school (system) is $2.6 million for the 30 years,” Schupp said.

The developers will be seeking a tax abatement through “Special Service District” bonds, issued through the Coweta County Development Authority. Hal Berry said they have already spoken with the Development Authority President Trae Westmoreland and board members, and would be sitting down with the CCDA soon to discuss further details.

Schupp said that when the abatement expires, the city, county and school system would receive $10.3 million.

Schupp said those estimates, which he called conservative, were based on the millage rates for all three governments staying the same over those 30 years, which both city officials and developers acknowledged was extremely unlikely.

“As we all know, I’ve never seen a millage rate stay flat for 30 years,” Schupp said.

When Councilman George Alexander asked about the development’s tax bill if the abatement was not granted by the city, Schupp said their tax bill would probably double, based on the valuation of the property.

During the meeting, Councilwoman Cynthia Jenkins asked if any tax abatement was going up to a vote during Tuesday’s meeting. The answer was no.

“If this is approved, but later on, the tax abatement is not, what happens to this project?” Jenkins asked.

“We’d have to analyze it to a point and see where the financial returns are,” Schupp said.

Members of the public brought it up during the Tuesday night meeting, asking about the deal, and Councilman Dustin Koritko, among others, grilled the applicants on the matter.

“While I appreciate the changes that have been made to the project since November, they are not significant enough to earn my support or the support of others I have spoken with,” said Jennifer Petrino. “I have many reasons for this position, but I am most adamantly opposed to the 30-year tax abatement that the developer is asking for and rarely mentions.”

Petrino said that the city, county and the Coweta County School System will receive only around 42.7 percent of the normal amount of taxes from the development.

“I am concerned our property taxes will have to be raised to pay for the impact this property will cause to our road infrastructure, schools and emergency services.”

Petrino worried that the city would be setting a precedent by allowing the developers a 30-year tax abatement.

“City of homes, not apartments”

During the meeting, those opposed to the project lamented the possibility of more apartments coming into the city, with one resident bringing back a rallying cry from 2019, when the city council looked at a proposal for the Caldwell Tank site.

“Remember that we are called the City of Homes,” said nearby resident Ann Chirhart. “The City of Homes. Not Apartments. At one point, all of you rejected a proposal at Caldwell because of the apartments. We’re just asking for similar treatment.”

In 2019, the city council rejected a proposal that would have transformed the Caldwell Tank campus into a site with 340 luxury apartments and a parking deck. The proposal was shut down after members of the community spoke out against the proposal.

“We don’t need more apartments,” said Scott Barronton. “I think you’ve said it yourself. We’ve got 1,000 units that haven’t even been built yet that have been approved. And now you’re wanting to build 350 more. This is not the right thing for Newnan; it doesn’t add to the property values of our homeowners who are represented here, so I ask you not to approve this.”

Chirhart recited the city of Newnan’s vision statement, and asked city officials how the mixed-use development would fit into that.

“Please tell me how Poplar Place fulfills this vision,” Chirhart said. “It fails to blend the historic character and small-town feel that many of us have appreciated about it. Instead, it brings to Newnan an imbalance of economic development, because it continues to add to the overdevelopment to the east side of Newnan. It includes more apartments than we could possibly need.”

Chirhart also expressed concern over low-paying jobs coming into the development with the restaurants and hotel proposed for the area.

“This plan proposes to offer over 3,000 permanent jobs, yet in phase one, many of these jobs are low-paying jobs because it relies on the hotel,” Chirhart said. “I don’t care if it’s a luxury hotel, the workers are still going to make low wages. You could work at a Ritz-Carlton and it doesn’t matter because you’re still making low wages.”

Concern over impact on services

While many asked about a tax abatement, others questioned the impact the new establishment would have on the level of service the city puts out.

Since the project would be annexed into the city of Newnan, questions have been raised on separate occasions how the emergency departments, as well as the streets, would be impacted by the development.

Questions were also raised concerning the streets and roads being developed as part of the mixed-use project. Mayor Keith Brady questioned developers about what portion of the roads would be handled by city staff vs. privately handled by staff hired by the developers.

“It’s an issue we’re working out,” Schupp said. “The city streets and roads are being developed pursuant to city standards. The maintenance of the city streets was not intended to be dedicated to the city, because of setbacks, landscaping and other features we want to maintain. The maintenance of the streets would fall on the developer at this time.”

Schupp also said that the costs for improving the streets would fall on the developer, stating that the Development of Regional Impact reviews put out by the Georgia Regional Transit Authority and the Three Rivers Regional Commission have recommended improvements to a number of intersections, and added turn lanes were required.

“All of those costs would be borne by the developer,” Schupp said. 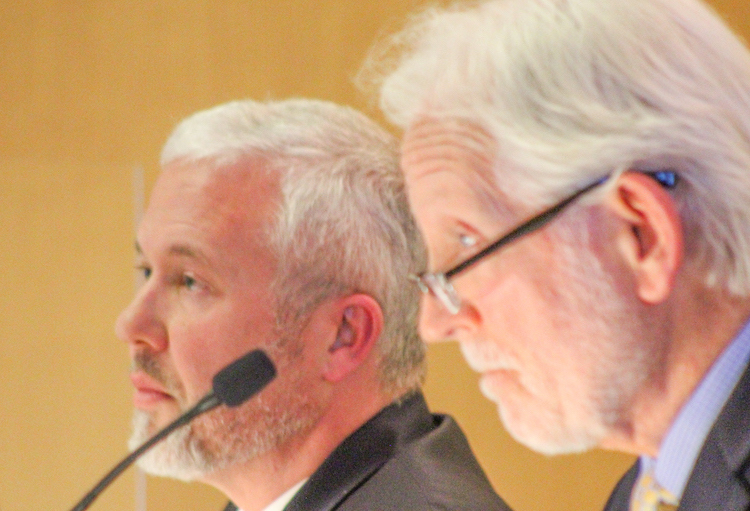 Council members Dustin Koritko and Paul Guillaume listen to answers from their questions during Tuesday’s Newnan City Council meeting. Koritko and Guillaume were two of the three votes opposed to the Poplar Place annexation and rezoning on Tuesday night.

According to city documents, both the police and fire chiefs sent in letters suggesting that the new mixed-use developments would have an impact on the remainder of the city.

For instance, a letter from Brent Blankenship, Newnan police chief, from back in August, before the proposal was modified, suggested the project, in its form at the time, would produce an estimated 1,096 calls of service over a 24-month period, after comparing the different components of the facility to other areas of similar size in the city.

“In addition to the increase of people and vehicle traffic to the area, it would impact calls to that area while affecting call service and response times to other parts of the city,” Blankenship wrote to the city.

Last March, Newnan Fire Chief Stephen Brown wrote that the development in its form at the time, would generate 370 fire calls over a 12-month period.

Brown wrote to the city that the Newnan Fire Department had the resources to provide services to the facility.

“However, it will impact the specific area with increased traffic which could result in motor vehicle accidents, increase call volume and response times to current established areas served,” Brown wrote.