Focusing on the journey

The state of Georgia has produced a number of great racing drivers over the years.

And in the future, the state of Georgia might claim another top NASCAR star: Baylor O’Neil, a 12-year old native of Grantville.

O’Neil, who drives the #99 Bandelero across Georgia and elsewhere, has dreams of making it to NASCAR, or perhaps to IndyCar or even Formula One.

This past weekend, O’Neil and his family were in Charlotte collecting awards from this past season competing in Bandelero cars both in Georgia and elsewhere, competing on tracks such as the Atlanta Motor Speedway in Hampton, the Lanier Raceplex in Braselton and Crisp Motorsports Park in Cordele.

O’Neil won the Georgia state Bandelero Bandit championship in 2021, and finished 7th overall in the Bandits division across the country.

“It was really fun when we got to do it,” Baylor said. “We were lucky because we got to go up to Lanier, and that was one of our turning points for this.”

His solid performance came from consistently running up front.

“We had a lot of success,” his father and crew chief Ryan said. "No wins, but we were close. We were so close. All year long, we fought for wins.”

The tracks in Hampton, Braselton and Cordele are all different. The Legends and Bandelero track at the Atlanta Motor Speedway, commonly known as the “Thunder Ring,” is a flat quarter-mile oval that utilizes portions of the track’s front straight and pit road, with short turns connecting the two.

On the other hand, the Lanier Raceplex and the Watermelon Capital Speedway at Crisp Motorsports Park are both .375 mile banked ovals. O’Neil compared the racing at these two tracks to NASCAR super speedway racing at Daytona Beach in Florida and Talladega in Alabama.

At those two tracks, NASCAR utilizes restrictor plates on the engines to prevent cars from going faster than acceptable levels, in an effort to keep the cars on the ground in the event of a car spinning out of control, and not flying into the air. The side effect of this, however, is that the field of cars are unable to separate from each other, and typically spend a race in a huge pack just inches apart from each other.

The O’Neils said a similar plate is used on the Bandelero cars to keep speeds at acceptable levels at Lanier and Cordele.

“You’re banked, and we have to put on a restrictor plate and a particular gear ratio. So it stacks them up. They’re side-by-side, and you have eight, 10, 15 cars, and if you make a little mistake, it’s similar to Talladega, you go to the back. It’s flat-footed.”

The Bandelero cars, when competing at a track like Lanier or Cordele, travels at speeds near 70 mph. 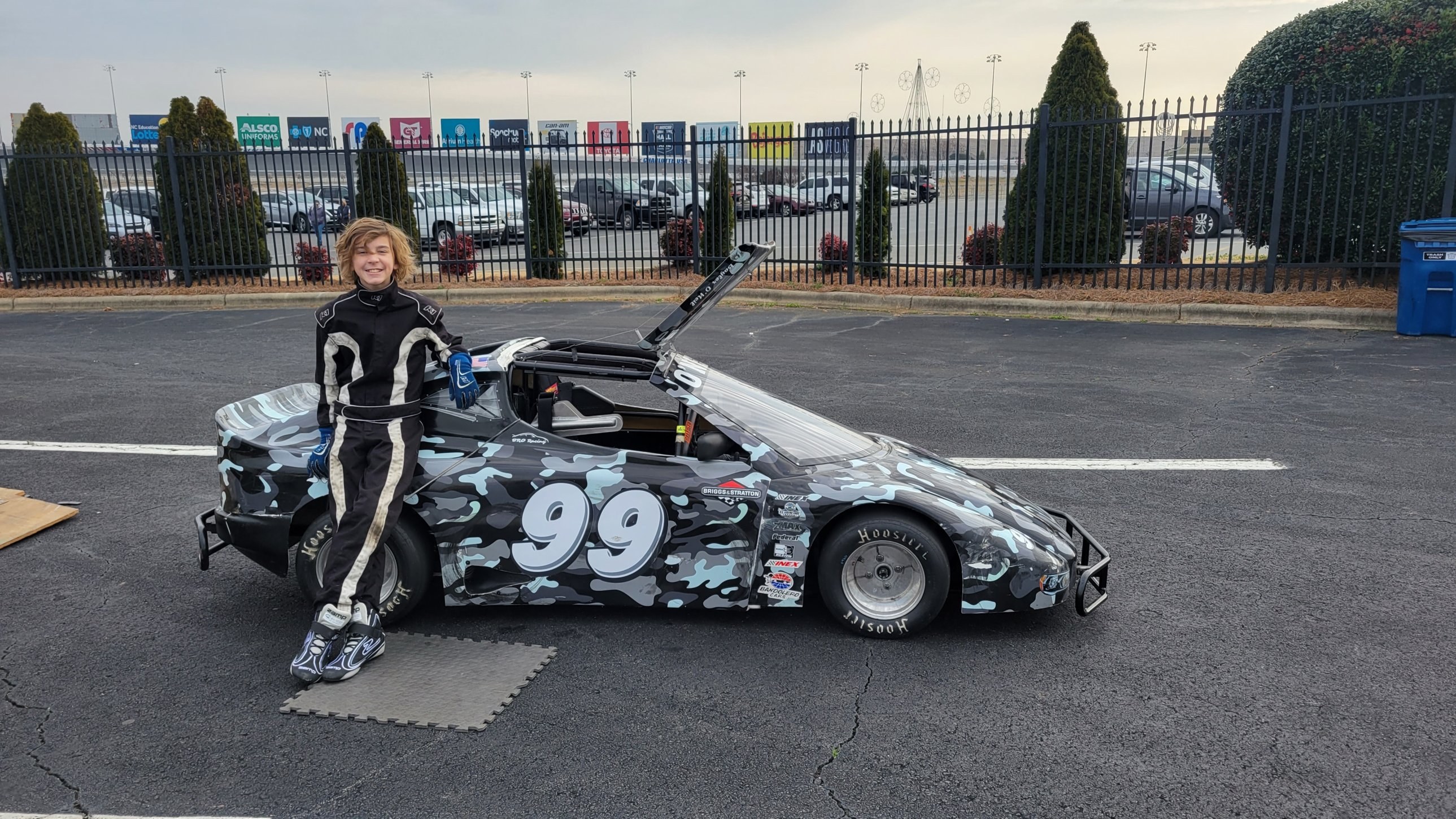 Baylor O’Neil with his camouflage #99 is a force to be reckoned with on the quarter-mile ovals at Atlanta and Charlotte.

Traveling up and down to turn left and right

Racing for the O’Neil family extends past competing in Georgia. In North Carolina, the O’Neils have competed at the Charlotte Motor Speedway in Concord, competing on both the quarter-mile oval there and the infield road course known as the Roval.

Baylor competed on a circuit utilizing part of the Charlotte Roval, a road course used by NASCAR for their October race weekend.

The experience at Charlotte is a bit different from other tracks, since that area is considered the center of the NASCAR universe, as most of the NASCAR teams and drivers are based in the Charlotte metro area.

“In Charlotte, they run teams up there. They have their full haulers, and they bring multiple cars out, and they have crew chiefs and spotters. They run them like a big business up there. Down here, it’s me and Baylor,” Ryan said.

The Roval is not the only road circuit that Baylor competes on. In Georgia, the Atlanta Motor Speedway also utilizes an infield road course for Legends and Bandelero cars. In addition, over in Dawsonville, Baylor has run on the hilly road circuit at Atlanta Motorsports Park, a track he said was one of his favorites.

In Florida, the O’Neils have competed at the FIRM (Florida International Rally and Motorsport) park located in Starke, located between Gainesville and Jacksonville.

It was there that Baylor was able to stretch his legs on the huge straights of the circuit, which was built off an old military airfield into a road circuit and a rallycross track. 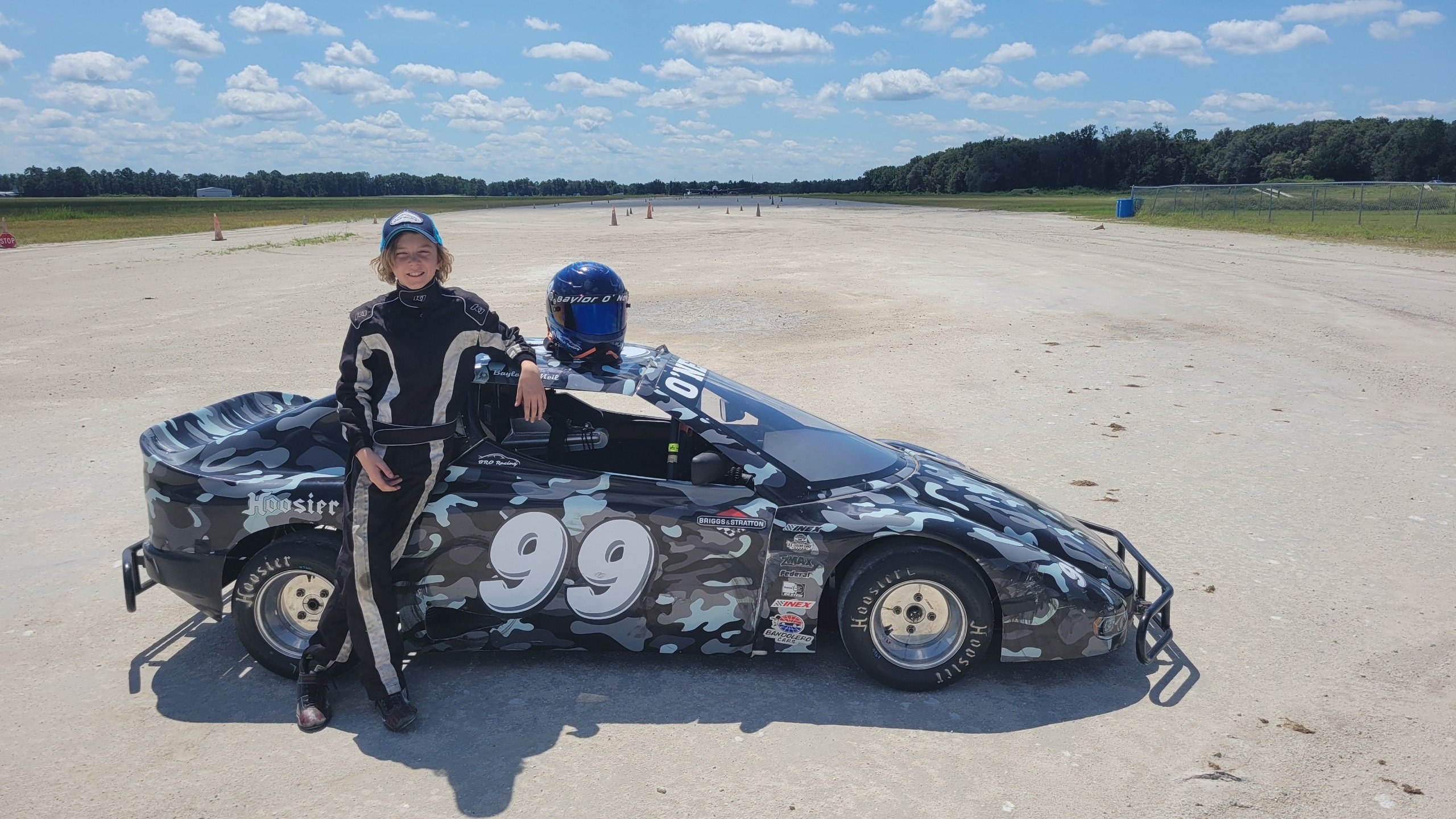 Baylor’s racing prowess goes beyond the ovals. Here, he’s seen at the FIRM in Florida, a road circuit built off a disused military base.

In total, Baylor competed in 42 races in 2021 and plans to run in about the same amount in 2022. His season will start this weekend at the Atlanta Motor Speedway, in the Furious Five winter series for legends cars on the resurfaced track.

O’Neil will then run at the Winter Nationals in Florida in early February at the FIRM and at the Citrus County Speedway in Inverness, Fla.

The goal is to move to Legends cars, larger, faster cars, for 2023.

The family that races together, stays together

Motorsport is, for the most part, a family-driven business. Families will go all in on the sport of racing to succeed together. Drivers such as Dale Earnhardt and Richard Petty were a part of racing families that have succeeded in the world of racing.

The O’Neil family, who have always been race fans, made the move from watching to driving after a Saturday at the Atlanta Motor Speedway.

“We always went to the Atlanta truck and Xfinity race, because it was the same day and I got in free for most of those times, so we always went there and we always liked it. There was one time where we saw Bandeleros there, and we were like ‘this is cool!’ You had to be 12 years old to run Legends cars, we saw you had to be 8 to run Bandeleros.”

Baylor started racing Bandeleros at the age of nine.

“We started with watching the race. The next week, we were in the infield in the pits, and it was before COVID. They opened the gates and the kids were signing autographs and all that kind of stuff. The next week, my father-in-law knew somebody who races there. They invited us down to the pits, and in a month, we bought a car and we were in hook, line and sinker. Now we have three cars.”

Baylor’s brother wanted to race at first, but in his first race, he witnessed a serious accident where a girl flipped up on her side.

“He saw it and said ‘I’m not ready,’” said their mother, Tiffany.

“But ever since he was little, he said ‘I want to drive NASCAR.’ OK. He started watching YouTube videos, and he decided he could do this. We were like ‘OK.’ Then we went and saw a race, and they came back and Ryan called and said ‘we can do this,’ and I was like ‘OK, this is what we’re gonna do, and we’re gonna make this happen.”

Tiffany said they haven’t looked back since. In the process, the family has bonded together, working on the cars, getting them ready for the next race.

“It’s great for them. They spend a lot of time together at the track, in the garages, working on the cars.”

Sponsorship: How fast do you want to go?

The cold hard truth about automobile racing, at any level, is that it costs money to compete, whether at the top level of motorsport in NASCAR, Formula One or IndyCar, or at the grassroots level of racing with Legends and Bandelero cars, racing is an expensive sport.

The budget for racing Bandeleros is lower, and the O’Neils are more focused on using those sponsors for entry fees.

Ryan said they’ve had conversations with a couple of people and have had pieces “here and there.” 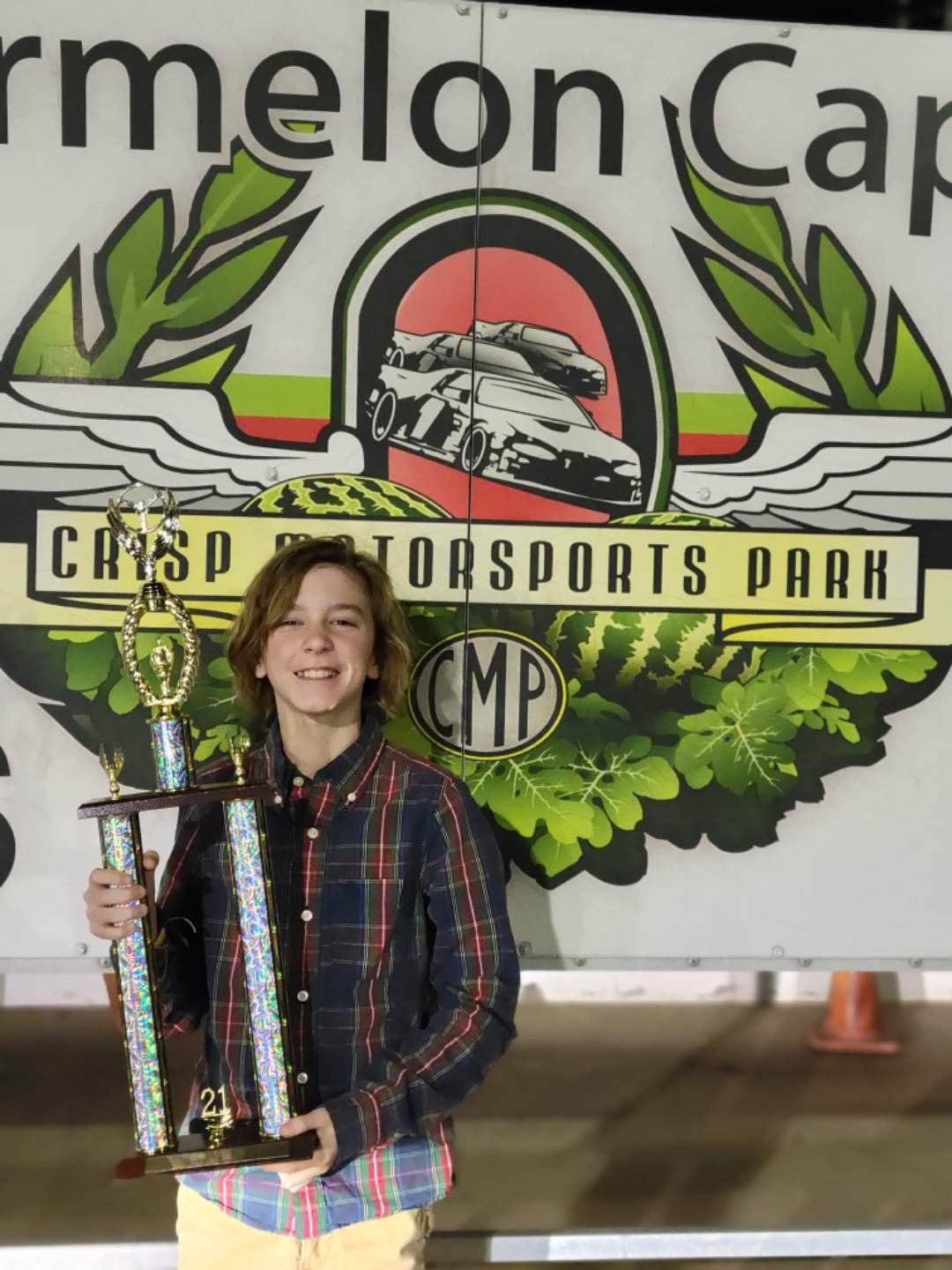 In 2021, Baylor O’Neil saw success at tracks such as the Watermelon Capital Speedway at Crisp Motorsports Park in Cordele, a .375 mile oval.