Sometimes it's hard to find positives in a game that just wasn't all that good.

It is essential to learn from what went wrong, not dwell on the negative, and move forward with any silver linings that can be found.

In the end, a team will be stronger for it.

That is the general idea of what Northgate head coach Mike McDonald told his team after the Vikings were handed a 27-0 loss by Villa Rica (1-2) last night in Sharpsburg.

“We practiced well for two weeks,” Coach McDonald said. “You have to give them credit. They made plays. They made a lot of plays, and we didn't."

The silver lining in this one was that while the Vikings (1-2) were outplayed in the first half, they held their own in the second and may have played better than Villa Rica in the back end of the game.

It didn’t take long for the Wildcats to establish dominance running the ball in the first half. The opening kickoff went for a touchback to start the Wildcats at the 20-yard line. They then methodically marched down the field on nine plays, all but two coming on the ground.

Ty McKey had a big 31-yard gain on the first play from scrimmage. Then solid runs of 4, 6, 11, 6, and 6 yards by the tandem of McKey and T.J. Harvison brought the ball to the Northgate 11-yard line. From there, McKey took the ball into the endzone for a 7-0 lead.

The Wildcats' running attack was a major thorn in the side of the Vikings' defense for most of the evening.

“That's what we have done a good job of in the first three weeks, stopping the run," McDonald said. "(Villa Rica) did a good job. They didn't really do anything we didn't practice for. We practiced what we saw.”

Villa Rica scored on its first two possessions. The second came after the Vikings’ offense went three-and-out on its first possession of the contest. A long kickoff by Northgate kicker Nick Troemel left Villa Rica pinned at their own 4. Bryson Ausby’s first carry also went for a loss back to the 2.

However, after that, it was all positive gains for the Wildcats. In all, the drive lasted for 15 plays and covered 98 yards. It was Ausby who broke a 37-yard run to the endzone with 10:03 left in the third quarter to make it 14-0.

It would be 20-0 at the half as Wildcats’ quarterback Colby Nalley capped off a drive that lasted just over two minutes with a 25-yard scramble for a touchdown.

The Vikings’ defense stepped it up in the second half, and their offense moved the ball better. After both teams’ initial drives of the third quarter sputtered, Northgate had a shot to put points on the board.

Starting at its own 14, two straight solid gains, seven yards by senior Riley Lane and a 10-yard burst by junior Clayton Cowart, sparked the Vikings' energy. Junior Dayton Milam followed with four yards of his own, and then sophomore quarterback Ishan Metts connected with junior wide receiver Amarion White for an eight-yard gain.

Cowart added another 12-yard gain to the Wildcats’ 24 where the drive stalled out. Troemel came on to try the long 42-yard field goal, but his kick, while having plenty of leg, sailed wide right.

The only score by either team in the second half came with 4:05 left in the game when McKey broke off a big 48-yard run to cap the scoring at 27-0.

Northgate threatened again in the closing moments of the game.

The Vikings got the ball with 54 seconds to play at their own 20. Lane broke a 26-yard run, and the Vikings’ passing game came to life. Metts connected with Lane for 12 yards, Matthew McDonald for eight yards, and Cowart for seven.

Then, on 4th and 10, with the ball at the 27 of the Wildcats and just two seconds left in the game, Metts connected with Tyon Williams, who broke tackles and raced towards the right corner pylon only to be caught and dragged down at the 3 to end the game.

“We told them, ‘Let’s go out and play like we are capable of playing,” Coach McDonald said. “’Go try to win the second half.’ I thought we played much better.”

McKey led all backs in the game with 11 carries, 125 yards, and a touchdown.

“Gotta move on,” Coach McDonald said. “Flush it and move on. We have a tough one next week (at East Coweta).” 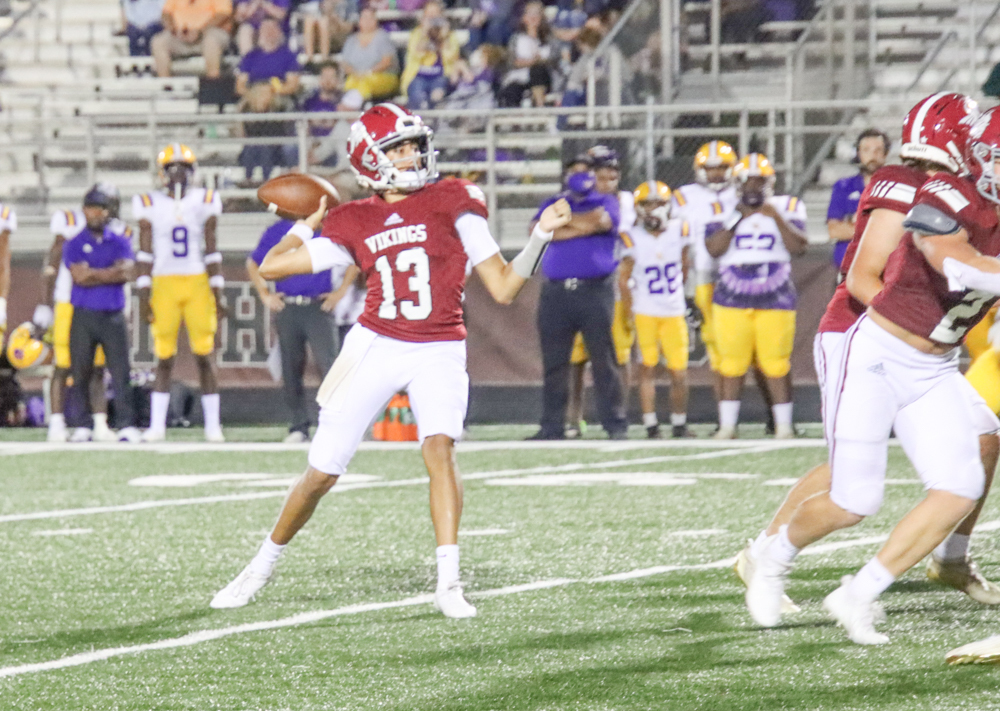 Viking quarterback Ishan Metts had four completions in their final drive of the game. 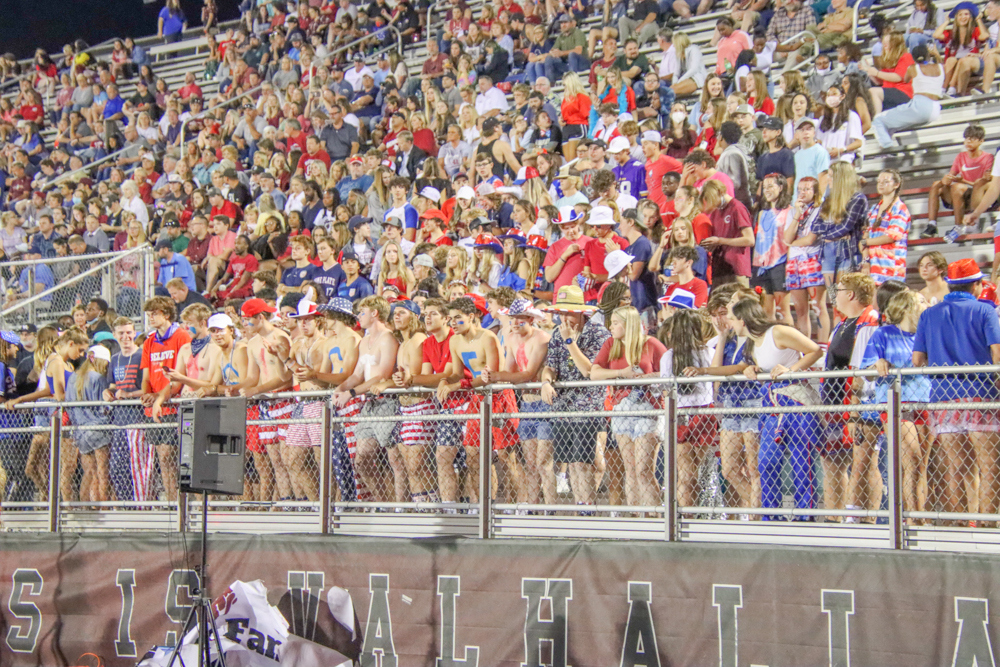 There was a big Viking crowd for Northgate's homecoming game. 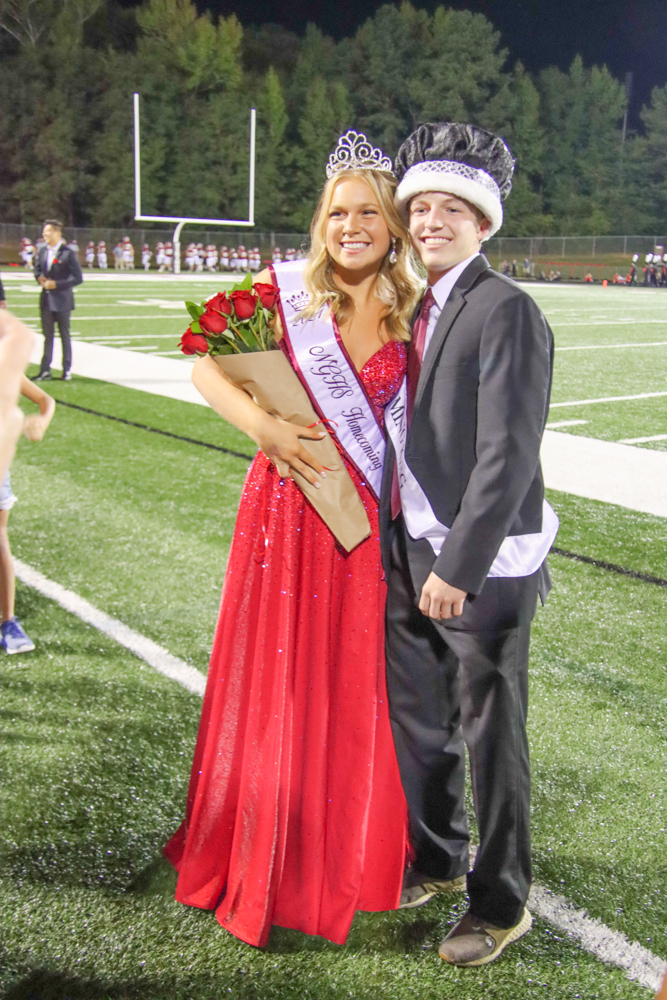 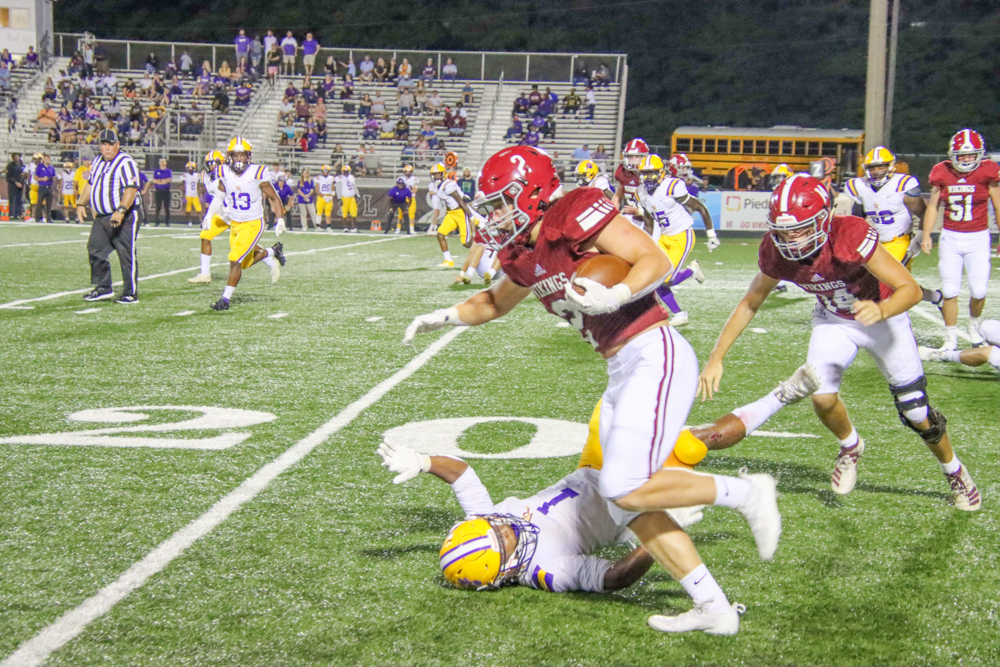 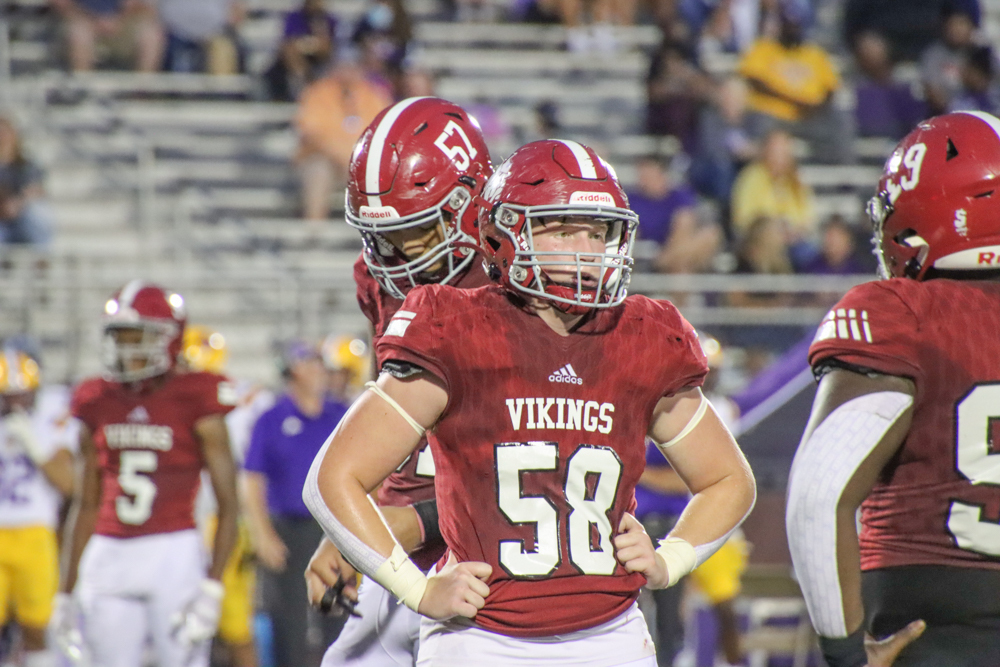 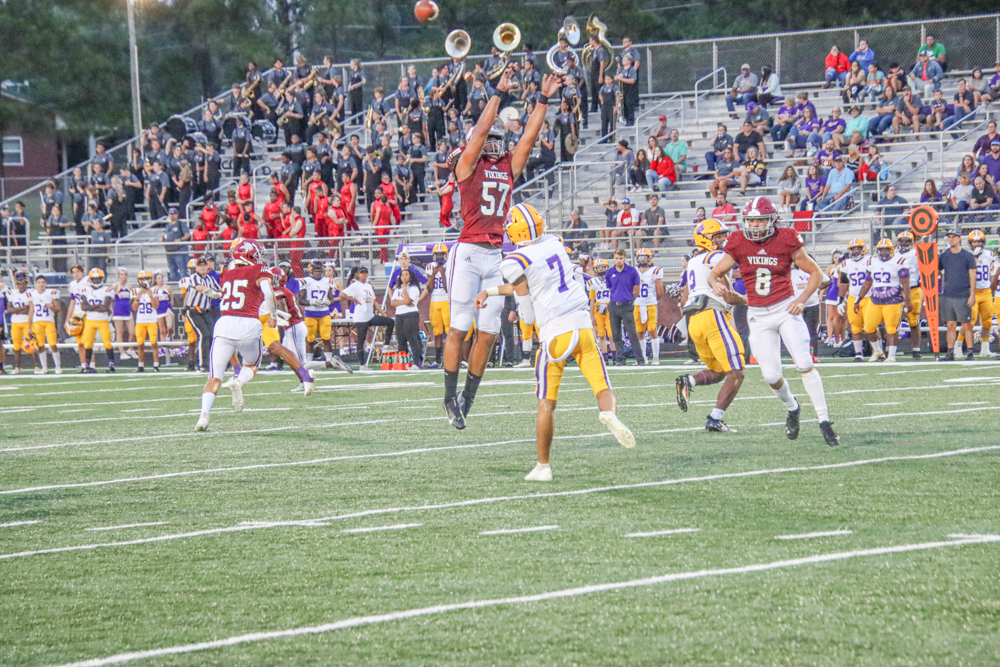 Defensive end Andres Franquez (#57) in the face of the Villa Rica quarterback as Justin Hale (#8) breaks free from a block.