(Bowdon, Ga) – After taking time away from the football field for COVID precautions and safety, the Heritage Hawks returned to action Friday night against Class-A power, the Bowdon Red Devils.

After a strong start that saw the offense tie the game midway through the first quarter, three turnovers and multiple penalties proved too costly. The Hawks fell 36-7 but left the field with some things to build on.

The game got off to a rough start for the Hawks. Bowdon's Chris Wyatt intercepted a pass that set up a short field for the Rad Devils to score first.

The Hawks revealed their ability to handle adversity when they tied the game just three minutes later.

On the play, that smaller defensive back, J’Kwon Cox, defended Townsend. Cox had no safety help over the top. Townsend was able to out jump the defender at the 10-yard line and walk into the end zone.

The momentum was short-lived. After Heritage kicker Mack Mikko boomed the ball out of the endzone, the Red Devils started their next possession on the twenty. Bowdon tailback Tanner Langley took a hand-off and exploded up the middle for what appeared to be an 80-yard touchdown run. However, Thomas Scoggins was able to bring him down after a 68-yard game.

Langley scored the first of his two touchdowns on a direct snap from the one-line to give the Red Devils a 14-7 lead. Langley scored again a few minutes later to extend that lead.

Throughout the game, the Hawks depended on the rushing attack from James Thorpe and Barbee. Thorpe ran high and rugged; using his size advantage to punish the Bowdon defense and gain yardage.

Barbee ran with more of a pinball-style. He sought out contact and bounced off defenders to pick up additional yardage.

With time running down in the first half, the Heritage defense got a sack from Wyatt Anderson to keep the game at 20-7 at the half.

With the Red Devils set to receiver the second-half kickoff, it was important for the Hawks to get a stop immediately to maintain momentum. Unfortunately, the Red Devils had other ideas.

On the first play of the second half, talented Bowdon quarterback Robert McNeal ran for thirty yards. The Red Devils executed their longest drive of the night, and when Luke Windom scored on a run from the 10-yard line to culminate a six-minute possession, the Hawks were in trouble.

That was confirmed a few moments later when Bowdon’s Chris Wyatt scored on an interception return to give the Red Devils a 33-7 lead.

With their entire season still in front of them, the Hawks did not give up. Barbee and Thorpe continued to chew up yardage. Barbee also found 6-foot-5 receiver Shaun Nichols for a 39-yard passing gain late.

The wideout-out combination of Nichols and the 6-foot-4 Townsend is going to pay dividends for the Hawks throughout the season.

For Hawks Head Coach Jake Copeland, it was time to focus on next week; he shared afterward, "We left a lot of objects out on the field, we gave up some big plays, defensively. Offensively, we had a lot of chances. We moved the ball well, that's the best I've ever seen James Thorpe play football. I'm super excited about that. And again, there's just a lot to build on knowing that we are a better team than what we showed tonight."

The Hawks will host the Chattooga Indians this Friday night. The game was scheduled to replace a game missed when the Hawks program was down. 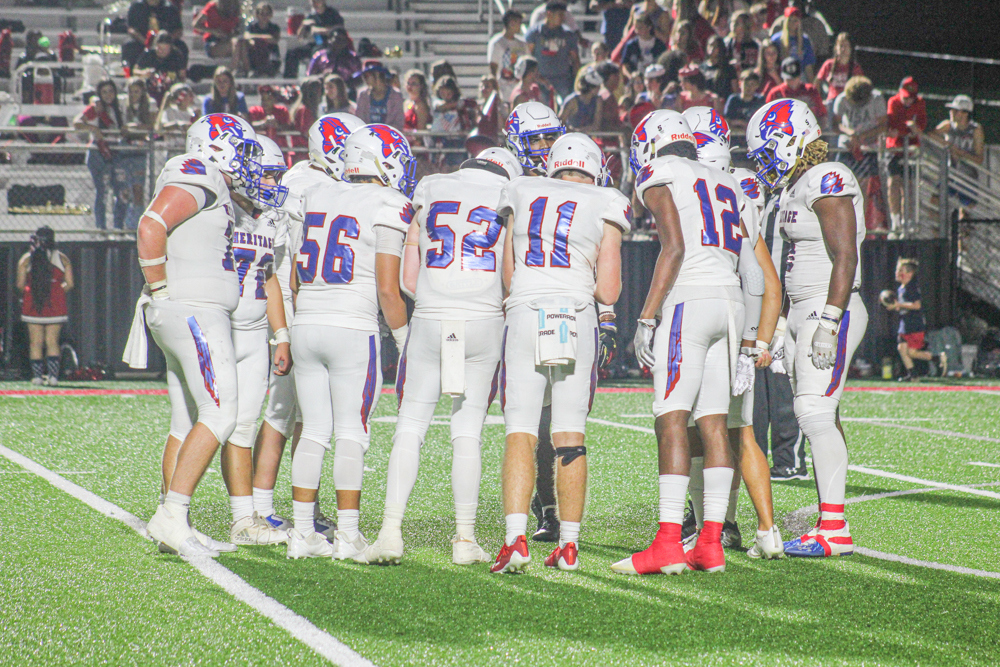 The Heritage Hawk offense was able to consistently move the ball against the Bowdon defense. 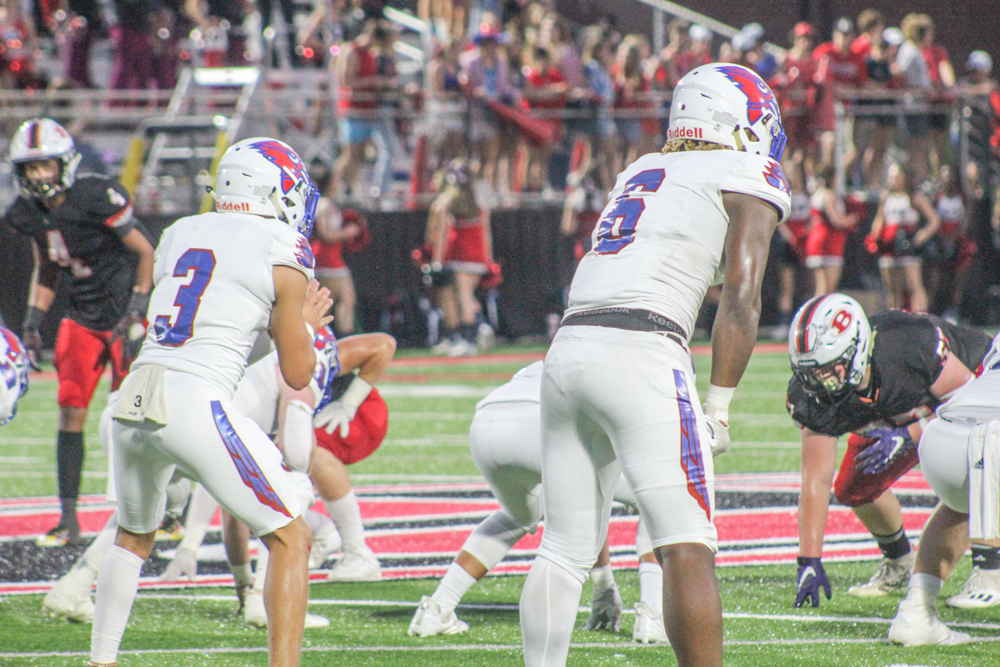 Hugh Barbee (#3) and James Thorpe (#6) each had several big runs on the night. 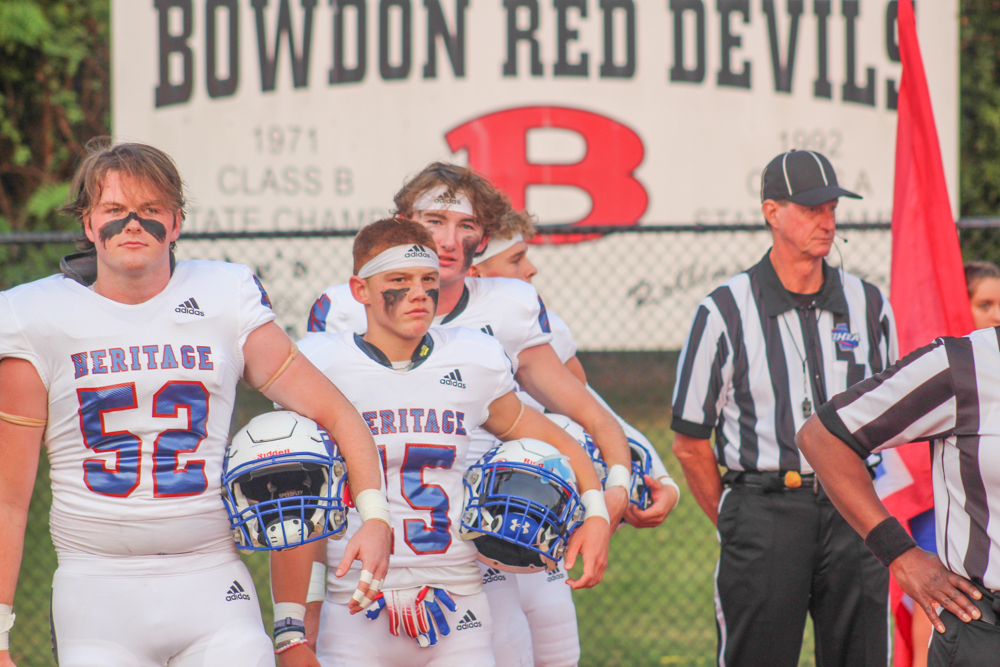 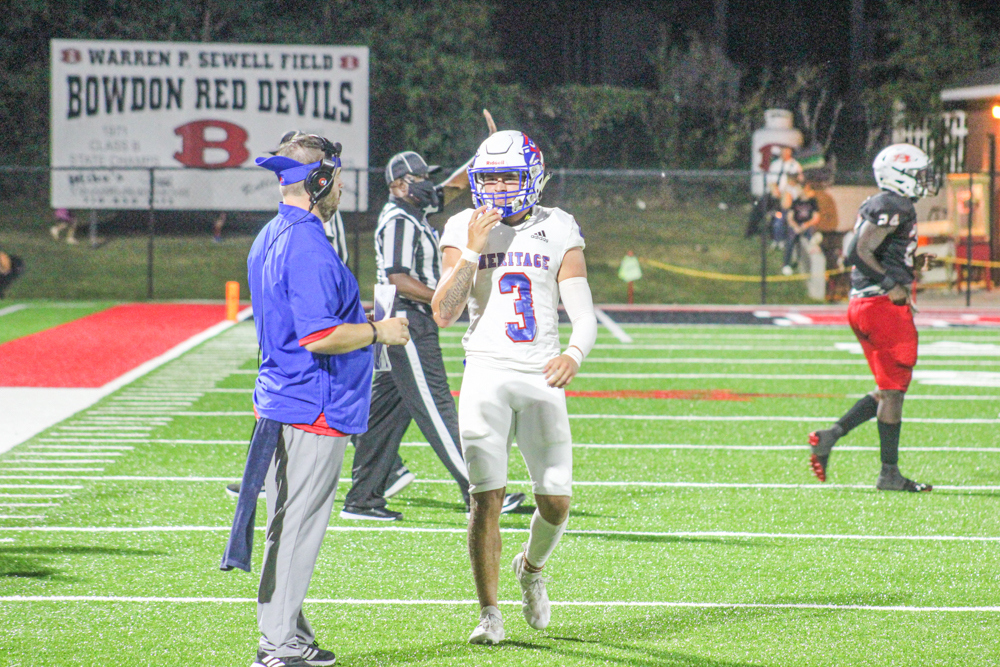 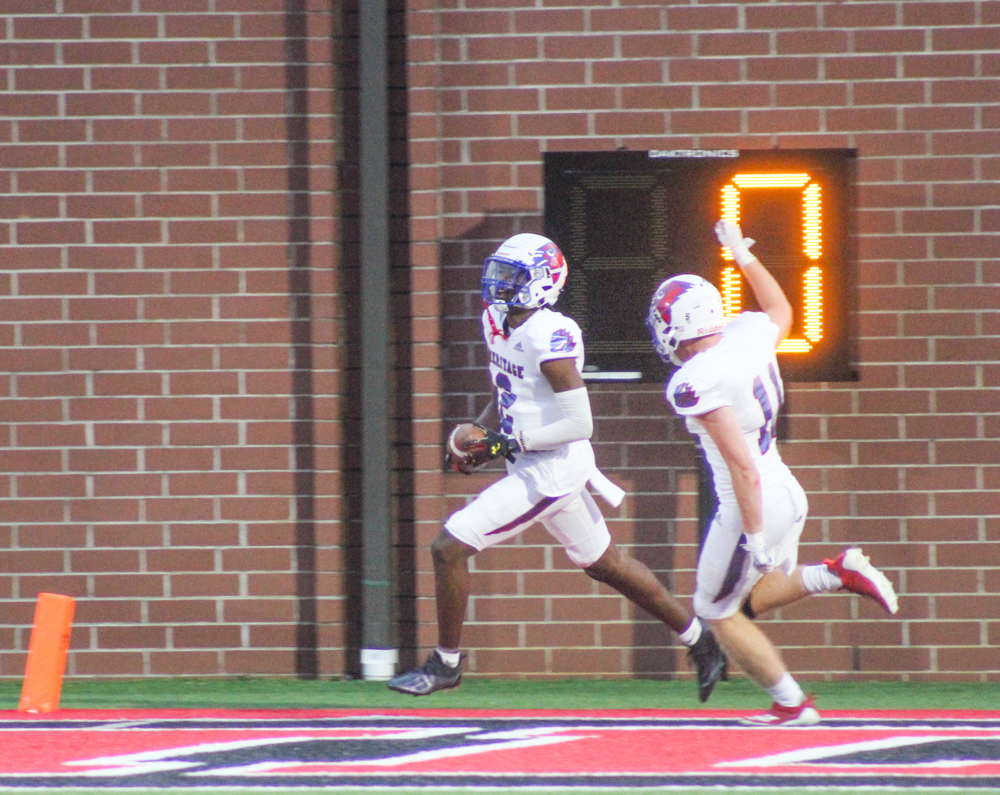