‘We train until you can’t get it wrong’

A gunman stands watch outside the old Newnan Hospital. Another gunman is inside. There are hostages, and there are victims inside.


Coweta County Sheriff’s Deputies arrive on the scene, taking cover behind their cars, then neutralizing the first gunman. With that threat out of the way, the deputies look for a way to go inside.

Eventually, they find a way and make it in safely. A brief struggle ensues inside, and the other gunman is taken care of. Meanwhile, a multitude of Coweta County deputies surround the perimeter, making sure none of the suspects get out.

This, of course, was part of an exercise, to make sure Coweta County deputies are prepared for the real thing.

For the last couple of weeks, the Coweta County Sheriff’s Office has been engaging in training that they call “stress inoculation.”

But for most of the public, the training being held at the old Newnan Hospital is active shooter training.

“We try to introduce as much stress as realistically possible, not just for the sake of stressing them out, but to get their brain used to being in this situation. God forbid, if it ever happens, you’ve done everything you can do,” said Inv. Toby Nix, public information officer for the Coweta County Sheriff’s Office. “We re-create the scenario, so when it does happen, your mind has been there. Your body can’t go where your mind hasn’t been.”

Major Warren Campbell explained how the Sheriff’s Office conducts the training, to make sure deputies know what to do, when they need to do it.

“That’s the way we try to do it. I’ve been doing a lot of training with him, and that’s not just something he says; that’s something we do,” Nix said. “You’ll see how many times they’ll run through a scenario, how many times they do whatever; they train until they can’t get it wrong. We’ve got to make life-altering decisions in a split second. You have to be comfortable in your training.”

Training to reduce the “fight-or-flight” mentality

Campbell explained how the training helps officers get used to scenarios such as this, so they are able to think clearly when their lives, and the lives of others, depend on it.

“What we’re fighting is a bunch of physiological factors,” Campbell said. “When the sympathetic nervous system kicks in for fight or flight, you have a lot of physiological factors, like increased heart rate, sweating, heavy breathing, high blood pressure, you have auditory exclusion, visual exclusion, stress, you have time lapses getting to slow down. I’m fighting for my life or I’m running for my life, so the body begins to shut some stuff down. So you can’t think very clearly.”

Campbell said that the training inoculates law enforcement officers in the same types of stressors that they may see in the field, so their fight-or-flight defense mechanism is not triggered as much.

“You get to see things and hear things that they normally wouldn’t hear when fight or flight kicks in, so they can process information, make better decisions and make different decisions than they would, because they were fearful, they were sweating,” Campbell said.

Campbell said trainees will walk down the hallway, walk 25 feet, shoot a sim gun and breathe heavy out of stress.

“They’ve done nothing but walk down the hallway and put 5 ½ pounds on the trigger squeeze, because those physiological effects of stress kick in,” Campbell said. “We’re literally inoculating them with all those factors.”

With the training, Campbell said officers and deputies can go into high-stress situations, think clearly and use what they learned in training exercises, rather than try to think about what they need to do while coping with the fight-or-flight defense mechanism.

“The best way we say this is, ‘Don’t let your first time be your first time,’” he said. “The first time you have to draw and discharge your weapon should not be out there in the field. You should have seen it so many times that that’s the level of force that was reasonable and justified, because the circumstances dictated it, not because I was fearful, I didn’t see some things I couldn’t process.”

This year, the active shooter drills have taken place at the old Newnan Hospital, where the Sheriff’s Office has used different parts of the hospital for a variety of purposes.

“You can open up and do something different for each floor,” said Sgt. Nathan Mullennix. “Active shooter in labor delivery. Active shooter in the morgue, the basement, the parking lot, the emergency room. You can turn a wing into administrative offices, a bank. This building has an unlimited supply of things you can do.”

The Coweta County Sheriff’s Office has been conducting these active shooter drills since 2015 at a variety of locations, including East Coweta High School, Northgate High School, Trinity Christian School and the Heritage School, among others.

As a side benefit for the active shooter training scenarios, law enforcement officers are able to figure out the layouts of the facilities, just in case a situation would take place at one of those locations.

Sgt. Drew Moorman said active shooter drills have gone from schools to other locations as shooting incidents have gone to a variety of locations over the years.

Those skills, and more, can be used in more than just an active shooter drill, as well. Deputies may need to arrive in a house for a medical emergency, or save someone’s life in the aftermath of a serious automobile accident.

“Say you’re trying to breach a house for a medical emergency,” said Sgt. David Hill. “You’ve got to get in the house and the fire department’s coming in from wherever. A lot of this stuff will carry over into not just active shooters, but stuff they use every single day.” 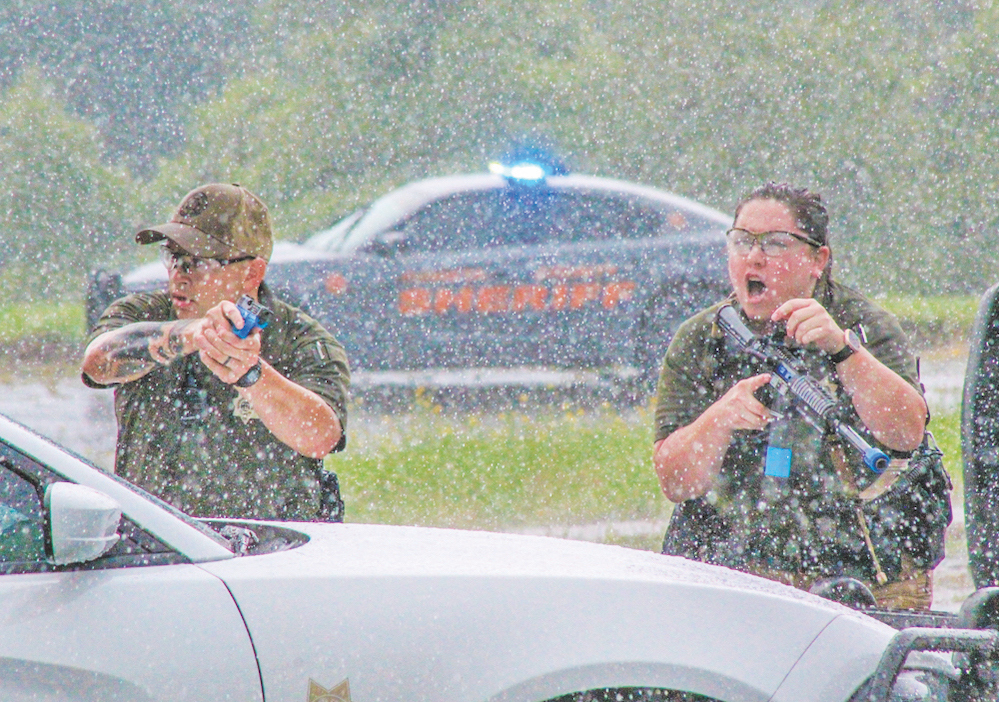 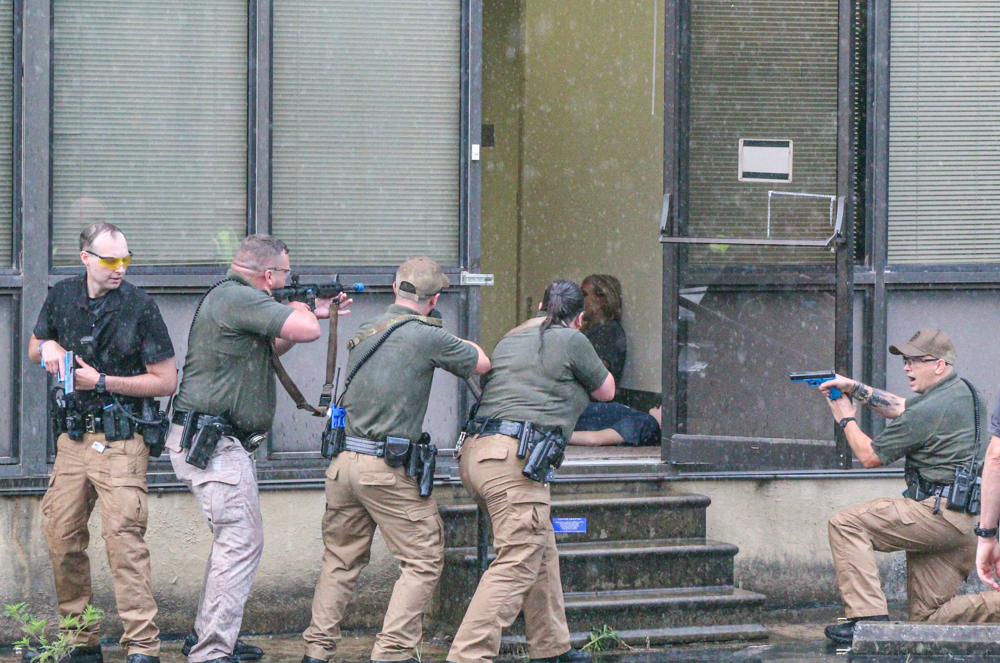 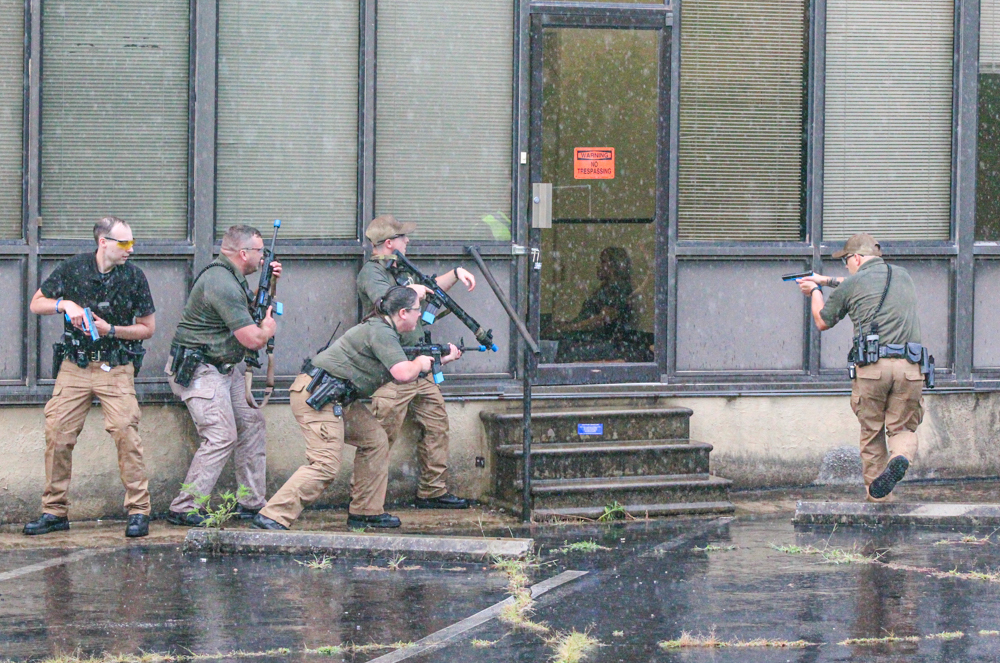 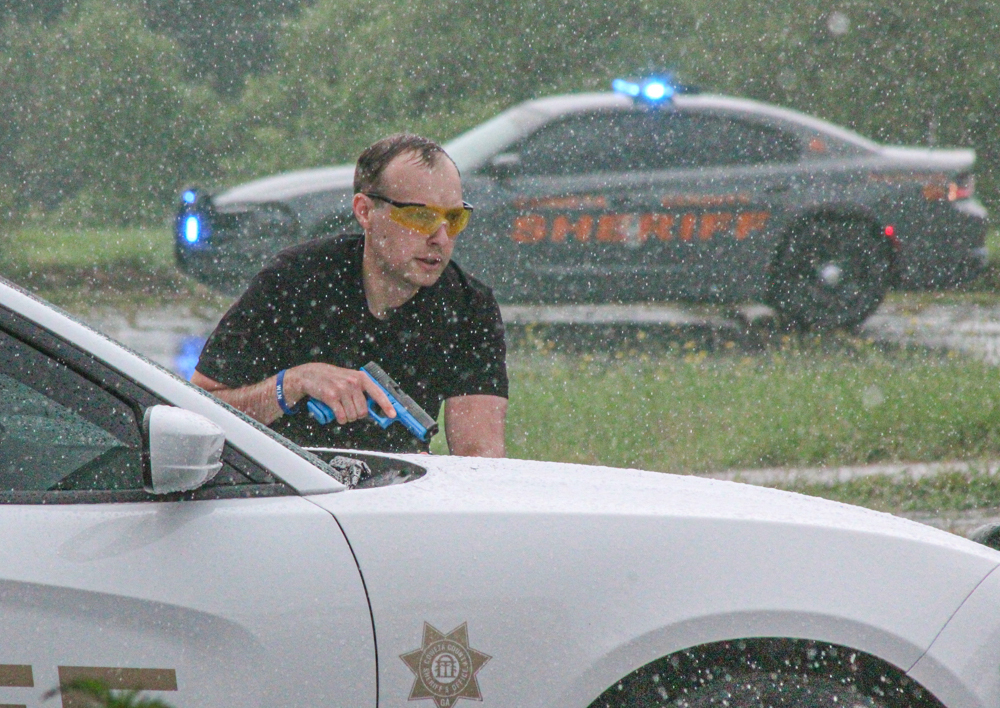 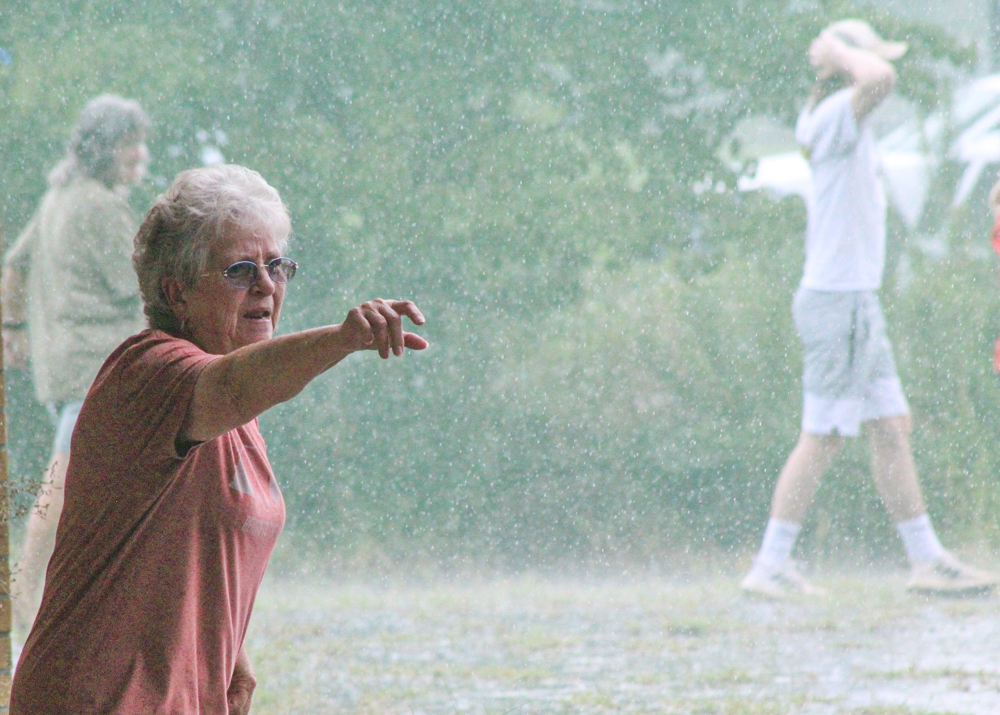 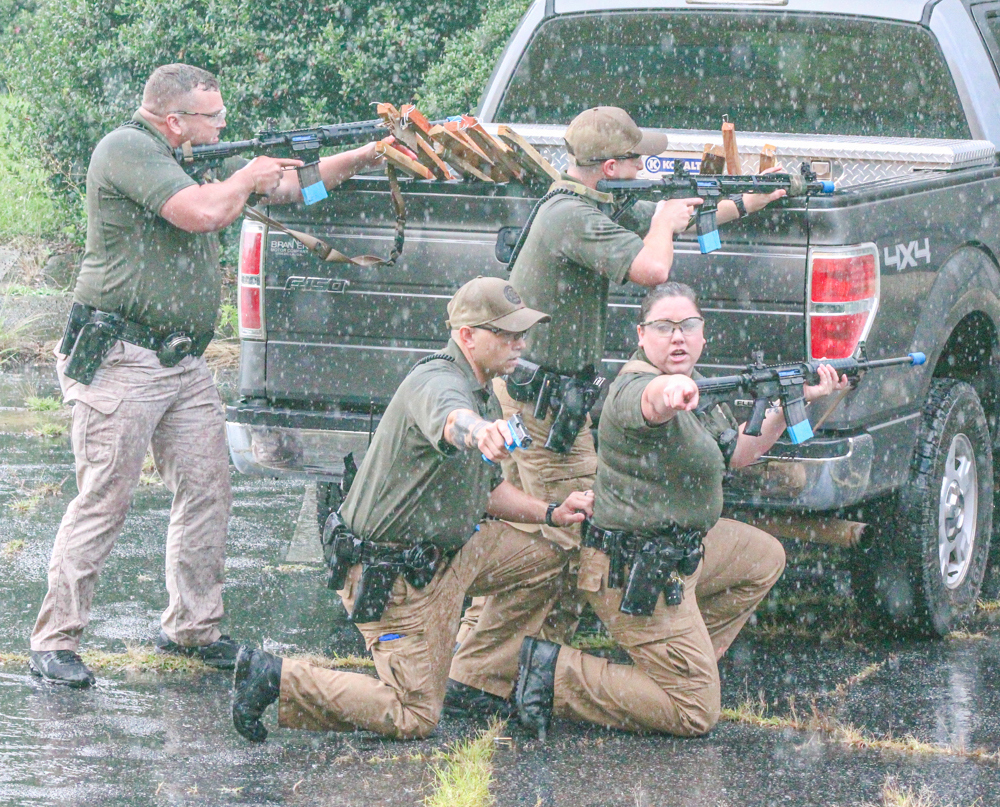 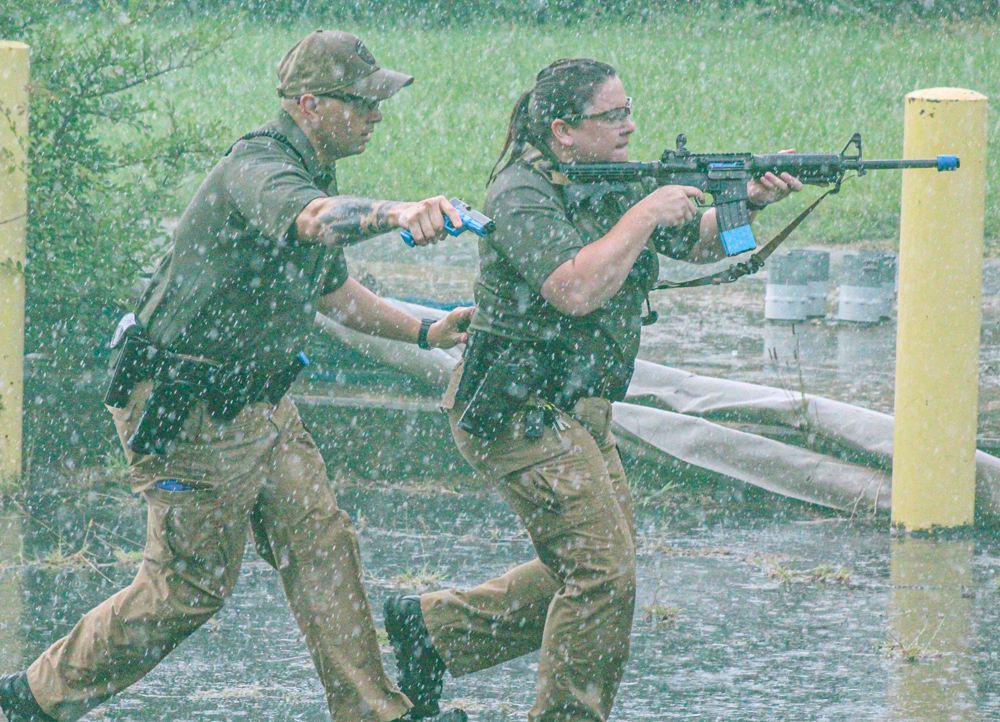 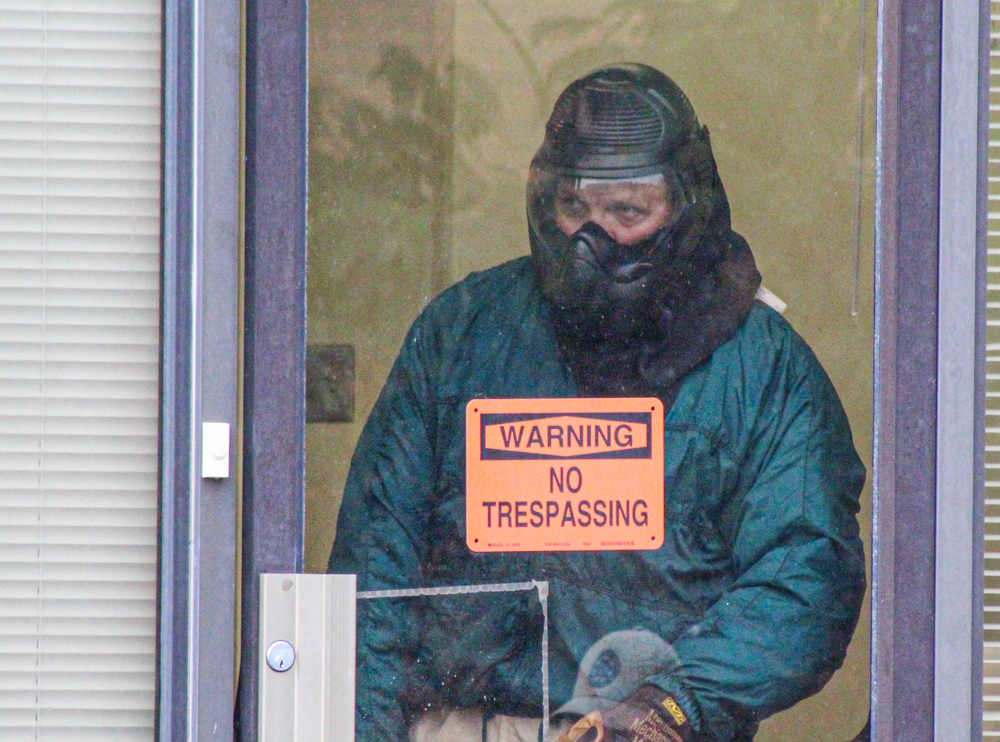 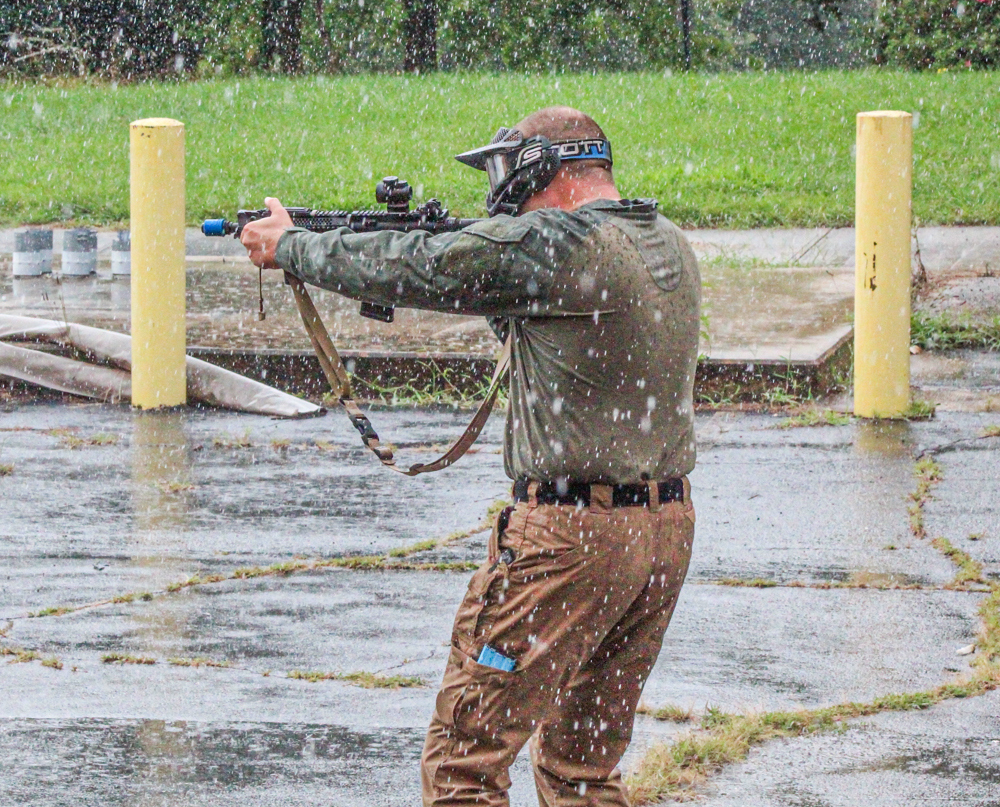 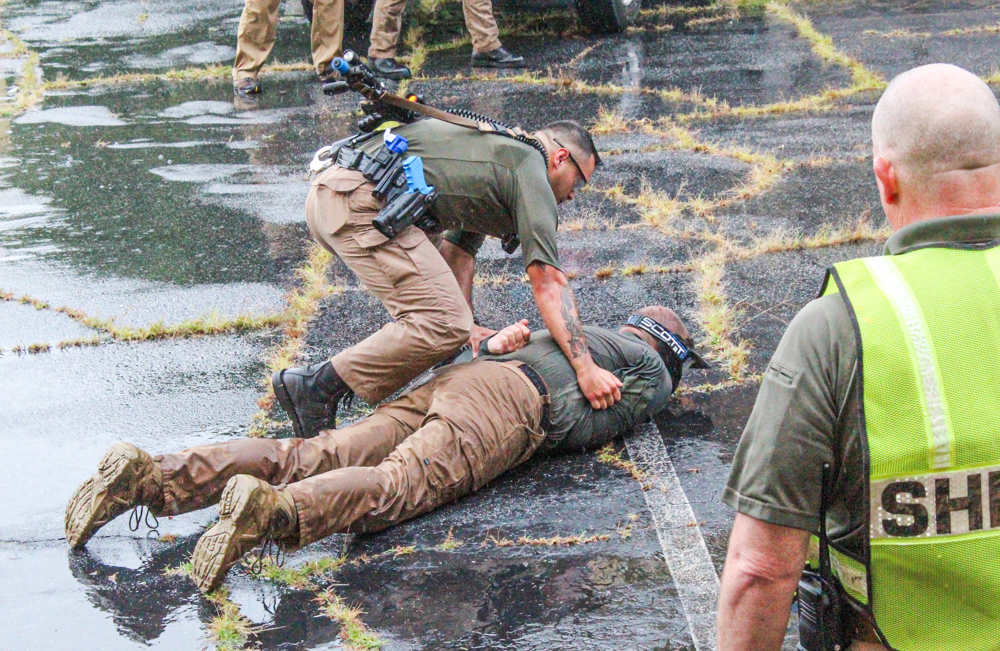 In an effort to enhance the realism of the scene, a makeup artist was brought in to put wounds on some of the volunteers helping out the Sheriff’s Office. One had a wound on her arm, while others had wounds on their head. 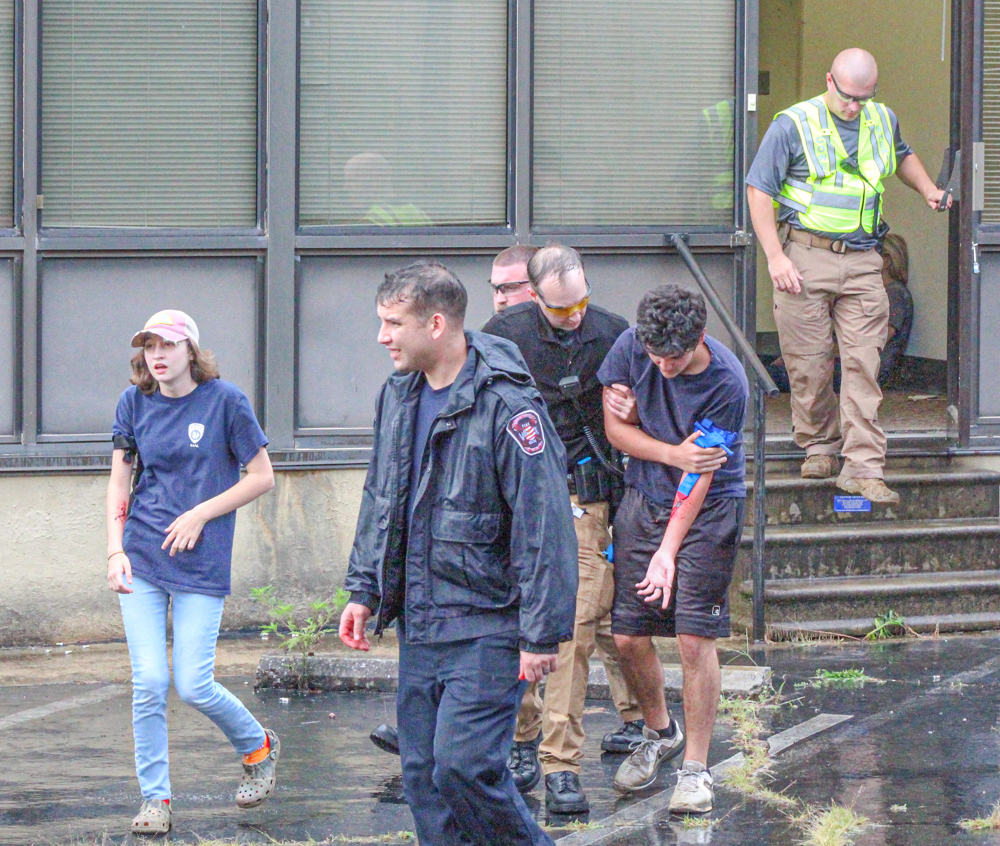 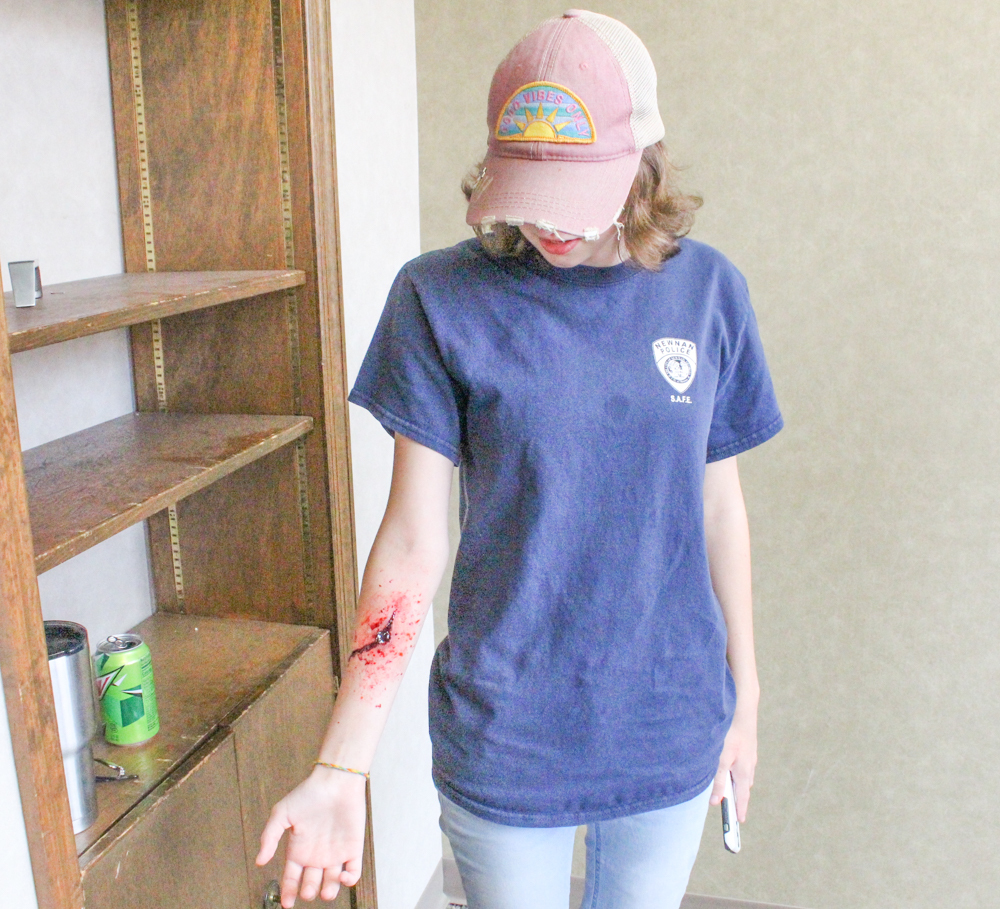 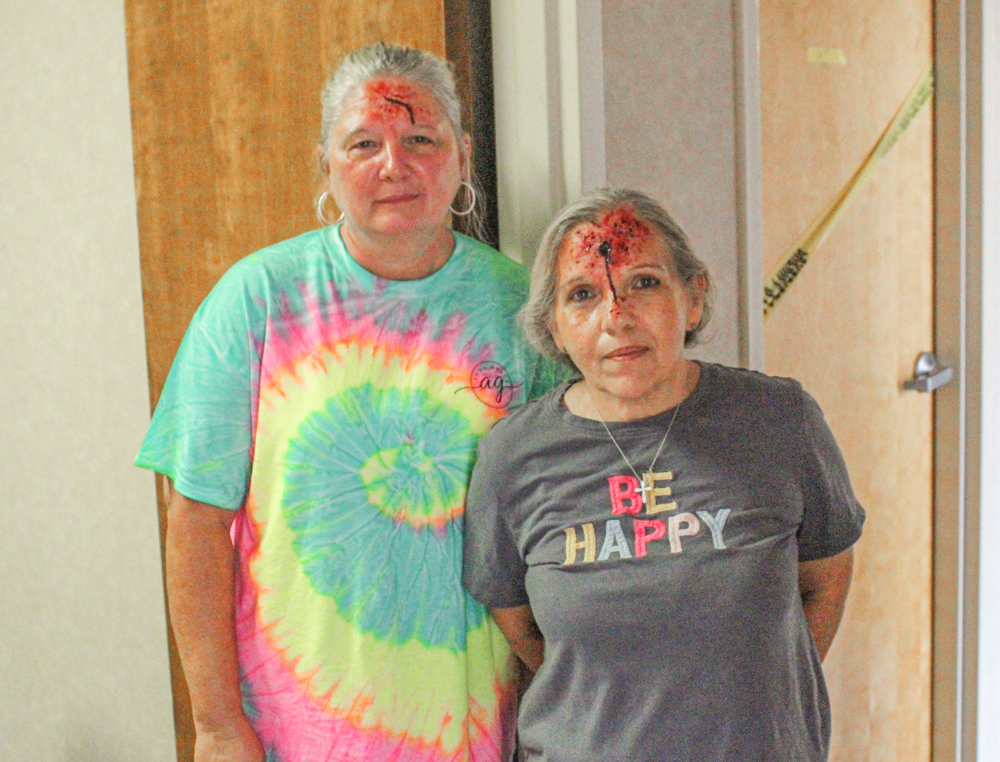