(Marietta, Ga.)- With last Tuesday's win against Campbell High School behind them, the Newnan Cougars found themselves traveling to the number one seed’s home gym, the Walton Raiders, for a chance to bust some brackets.

And the Cougars did exactly that as they stole the game from the Marietta natives, winning at the buzzer, 50-48.

After Walton’s forward, Luka Avaliani, tied the game, 48-48 on a reverse layup, the Cougars were granted an opportunity to create a magical moment in the round of 32.

Upon receiving a rolling inbound pass to conserve time on the clock, Senior guard Jamar Stargell drove down three-fourths of the court in 4 seconds, knocking down a walk-off floater over the smaller Raiders defender, stunning number 1 seed Walton’s home crowd.

“That was the exact game we told them it was going to be — this team is going to hold on … and they’re going to be very comfortable at home. And all year we’ve been a second-half team, and we did it one more time,” said Coach Trent Gatz, reflecting on what he told the team prior to the game and how it came to fruition.

Prior to the Cougars taking the lead in the final minutes of the fourth quarter, their offense creeped out of the gate only scoring seven first quarter points, which led to them trailing by six points going into halftime.

What’s a playoff game without any quirky calls, almost through the third quarter, with 53 seconds remaining, Stargell was fouled on a layup attempt and was headed to the free-throw line.

However, upon his walk to the line, the referee called a technical foul on the home bench.

Confusion again arose when the officials allowed the technical shooter to shoot before the common foul shooter. Nonetheless, the correct points were awarded, but the sequence seemed was the proverbial nail in the Raiders’ coffin.

As the third quarter came to a close, the Marietta native raiders had the last offensive possession of the quarter but their last basket attempt was impeded by a Zion Brown block.

Along with Stargell’s electric seven-point quarter performance that lifted the Cougars to their first playoff win in seven years, it was also their determination to share and protect the basketball. The 18-win Cougars racked up 13 assists and limited themselves to five turnovers.

Next, the Cougars will travel to Lilburn for their Sweet 16 matchup against the 12-win Parkview Panthers. Tip-off will be at 6 p.m. Saturday. 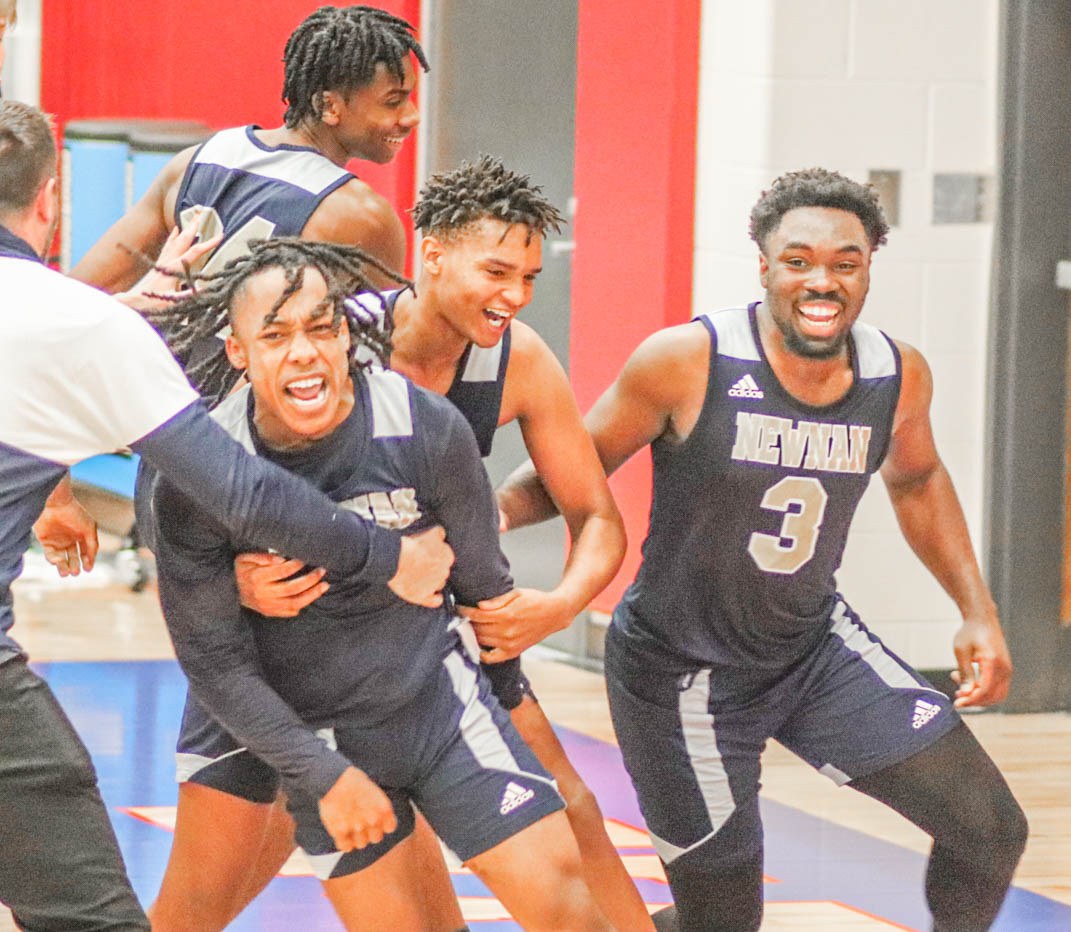 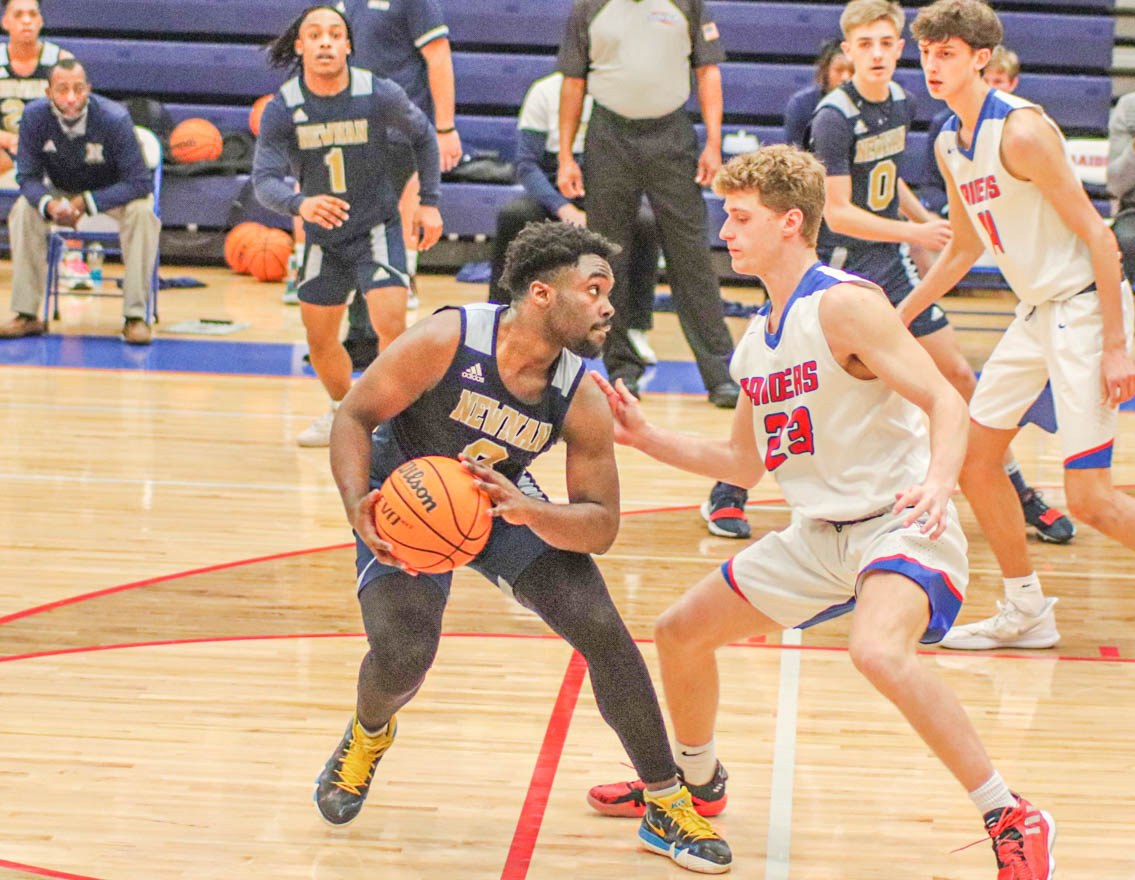 Eric Smarr dribbles into traffic to look for the open man cutting to the basket. 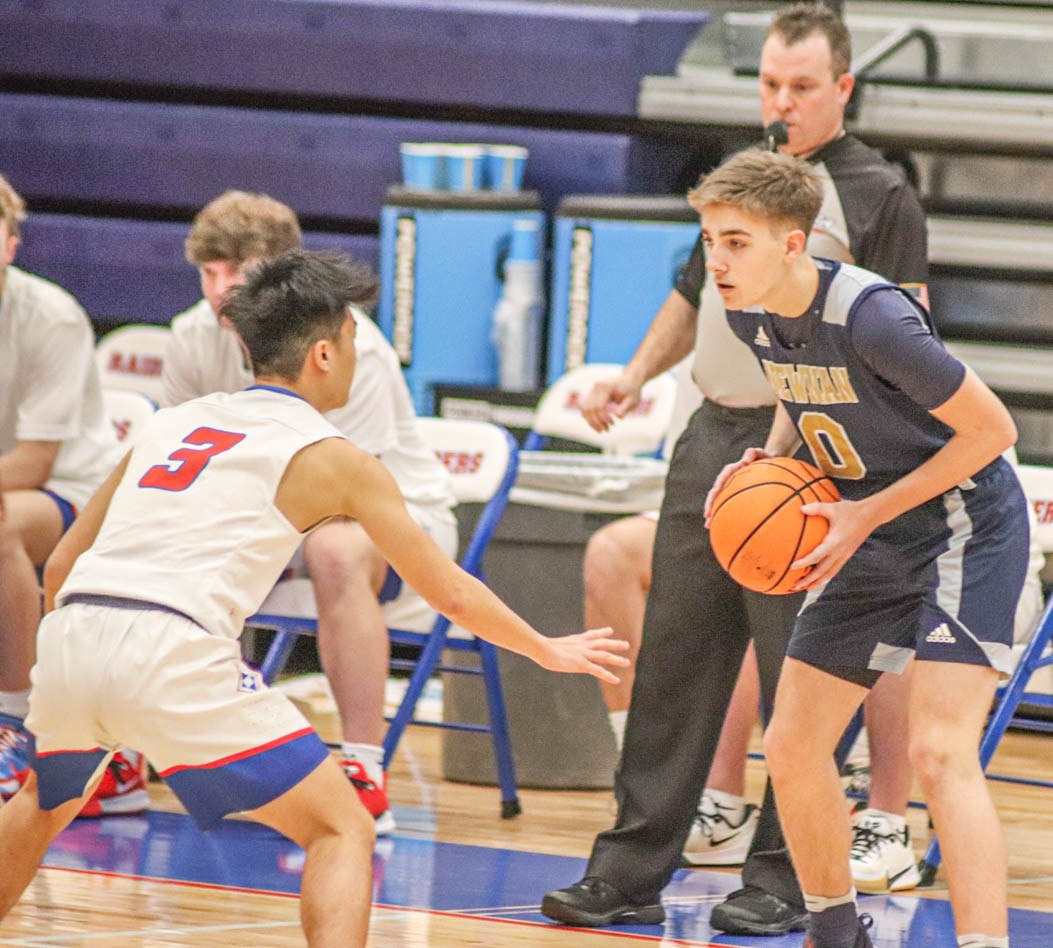 Wesley Drake led the Cougars with 14 points, all in crucial situations. 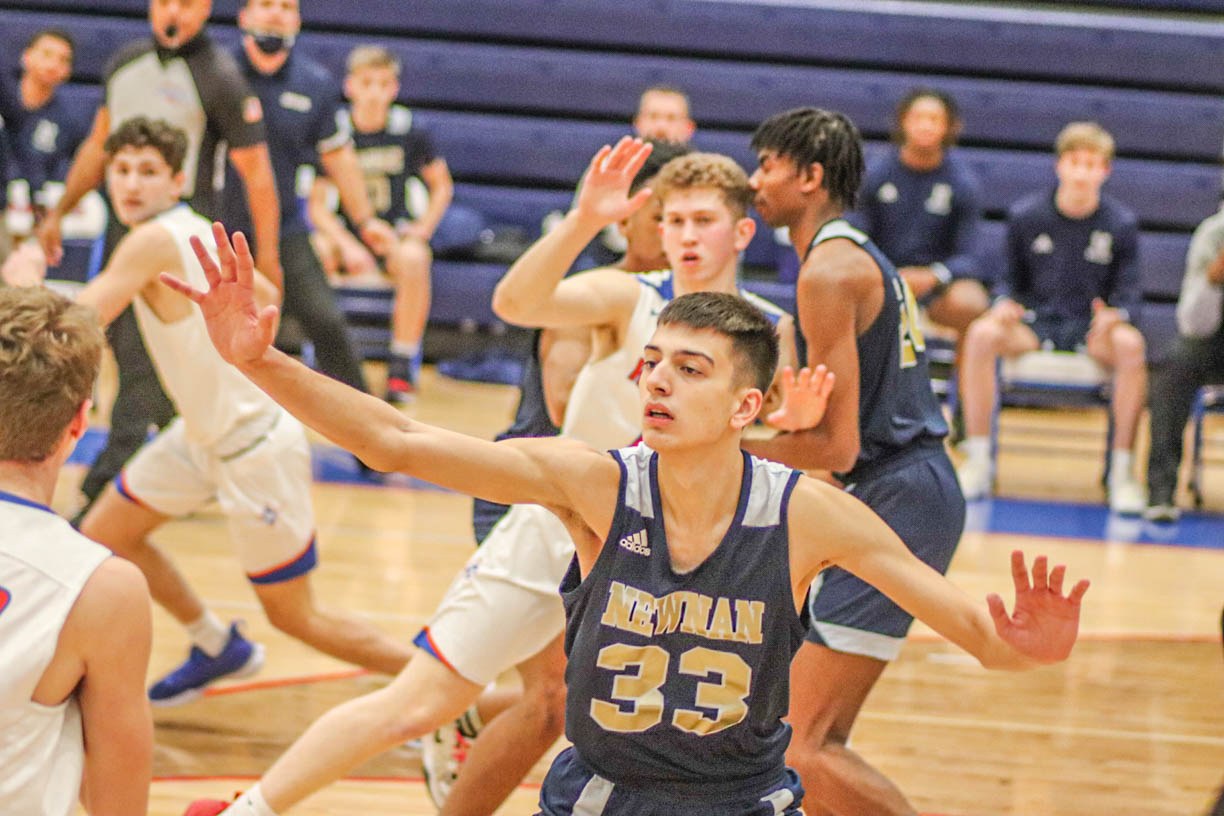 Mekhi Mawdesley uses his wingspan to cut down the offensive player’s vision and passing lanes. 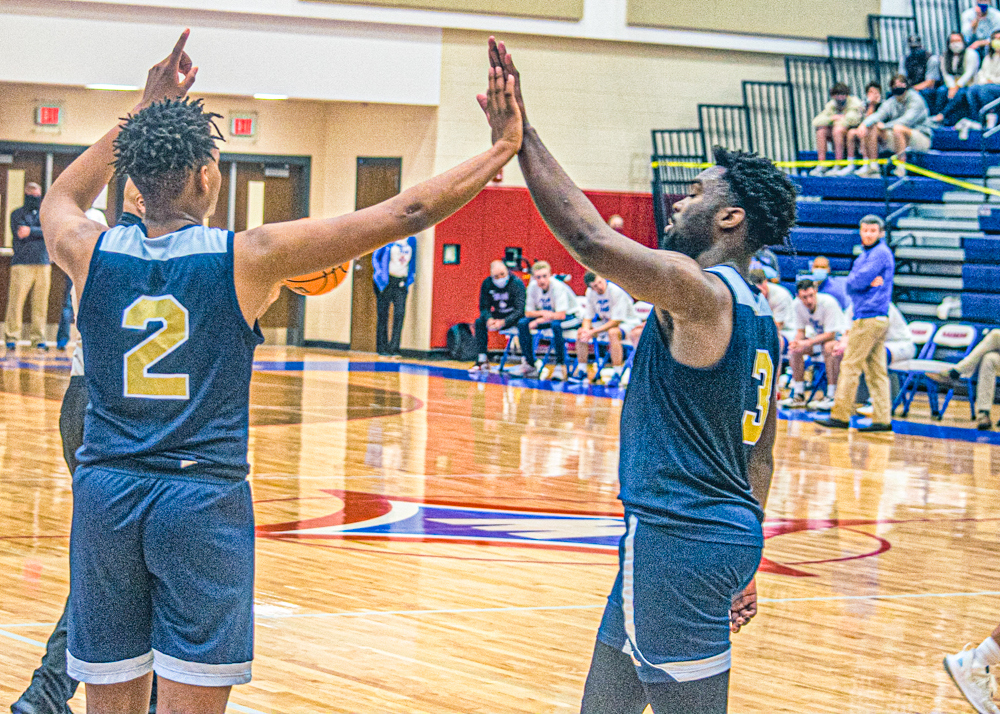 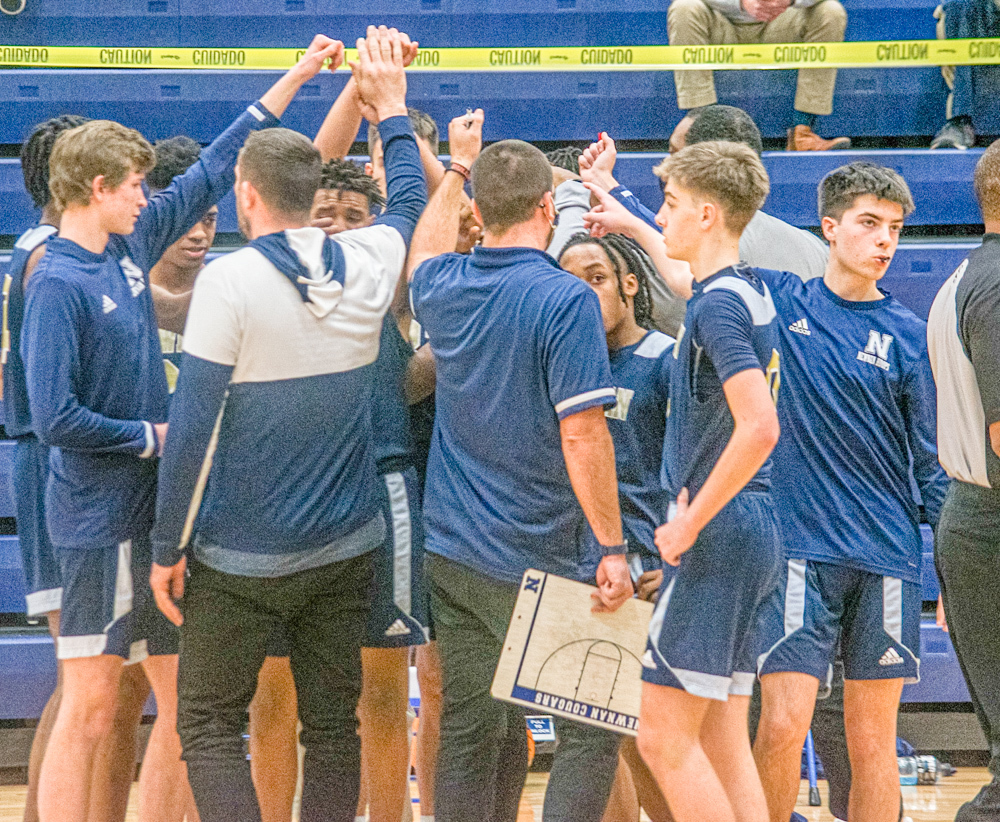