The Heritage Lady Hawks faced the St. Anne Pacelli Vikings for the second time in four days on Tuesday night, this time at the Hawks Nest.

After defeating the Lady Vikings in Columbus on Saturday 51-22, the Lady Hawks took care of business again, 57-29, behind a complete team victory.

The Lady Hawks were led by junior guard Haylah Spence’s 14 points, while seven players scored during the contest.

After playing a competitive first quarter, the Lady Hawks began to pull away at the start of the second. Spence hit a three to make the game 18-9, and Ianna Odulaja created a turnover and fed the ball to Quinn Wall for an easy two. Moments later, Odulaja took a rebound the length of the court and converted a 3-point play to put Heritage up 23-12.

The Lady Vikings fought to stay in the game and looked to go into the half with some momentum. They were having success by getting the ball inside to Airriana Moore who converted some opportunities.

Pacelli looked to get the final shot before half and cut the lead to eight, but Michaela Mikko stole the inbound pass and passed to Odulaja, who was under the basket, for an easy two.

It was a crucial four-point swing that sealed the fate of the game. It was obvious Heritage was going to win. The question left to be answered was: by how much?

Lady Hawks Head Coach Justin Stephens used the second half to work on some offensive and defensive sets. He subbed in and out liberally, often sending out a new five players at each break.

Spence drilled a three late in the third quarter to put the Lady Hawks up by 15 as they slowly pulled away for the final margin.

The win left the Lady Hawks record at 9-6. They closed out their regular season on Thursday with a home game against the Brookstone Lady Cougars. A win there would put the Lady Hawks in a tie for second with the opportunity to host a first-round playoff game.

The Lady Hawks fell 38-23 in a defensive contest to close out their regular season. They will carry the third seed into the GHSA state playoffs and will face the winner of Saturday’s game between Mount de Sales and First Presbyterian from the Region 1 tournament consolation game.

The Heritage boys followed against the state ranked Vikings and put up a fight early. After a Banks Coggin basket, they had a 12-11 lead late in the first quarter, but the Vikings were too much and pulled out a 64-47 victory.

Unfortunately, it was the last home game for Coggin and the Hawks for 2021. During the contest, they found out their opponent for Thursday, Brookstone, had COVID-19 issues and would not be available to play.

The Hawks will play again next week on the road in the first game of the GHSA state playoffs. 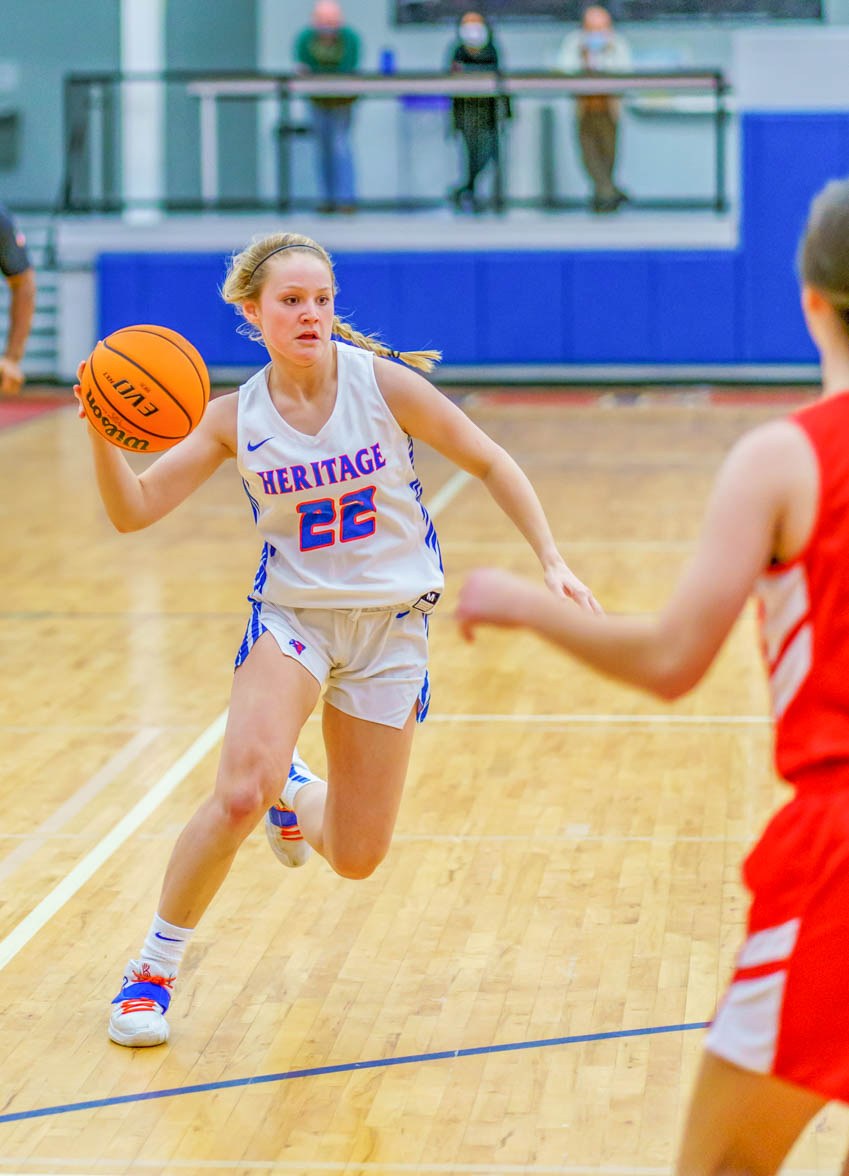 Michaela Mikko is a constant threat on defense – she goes after every pass looking for a turnover. 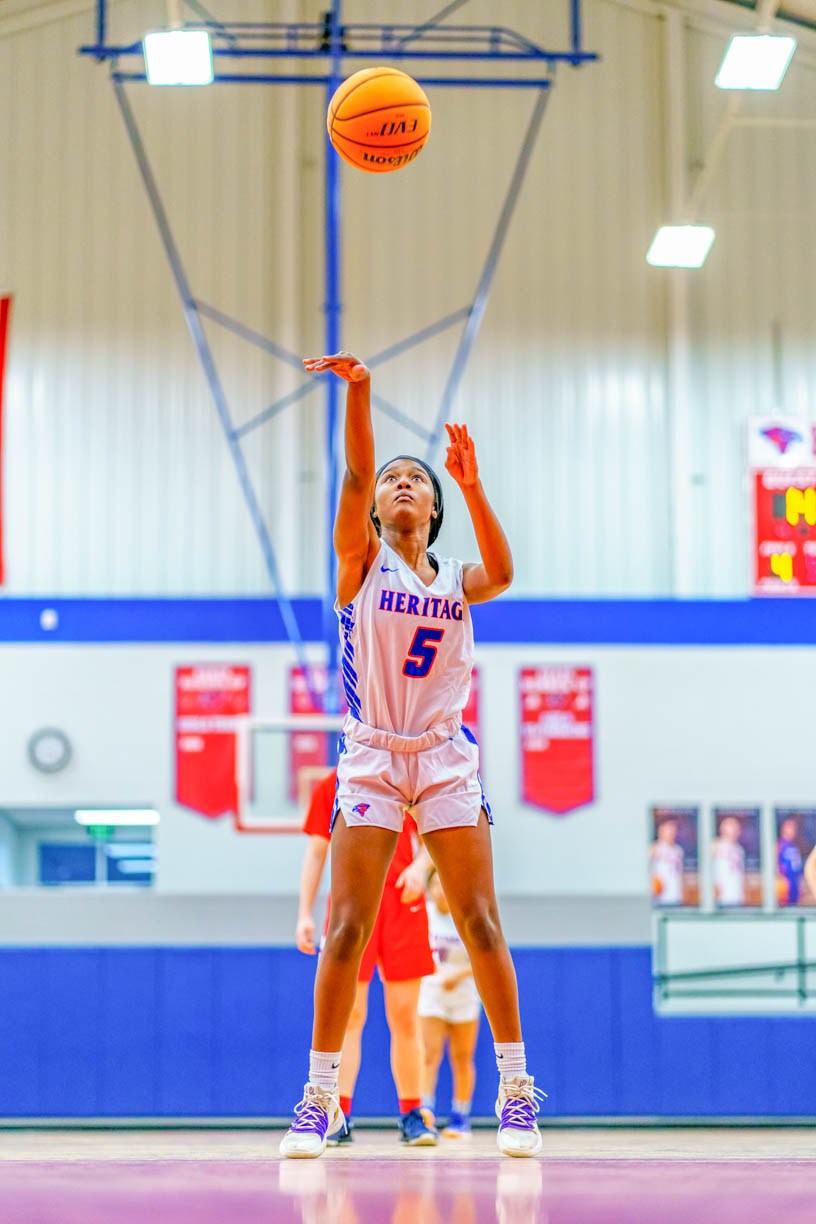 Senior Hailey Bracey from the free-throw line in the third quarter against St. Anne Pacelli. 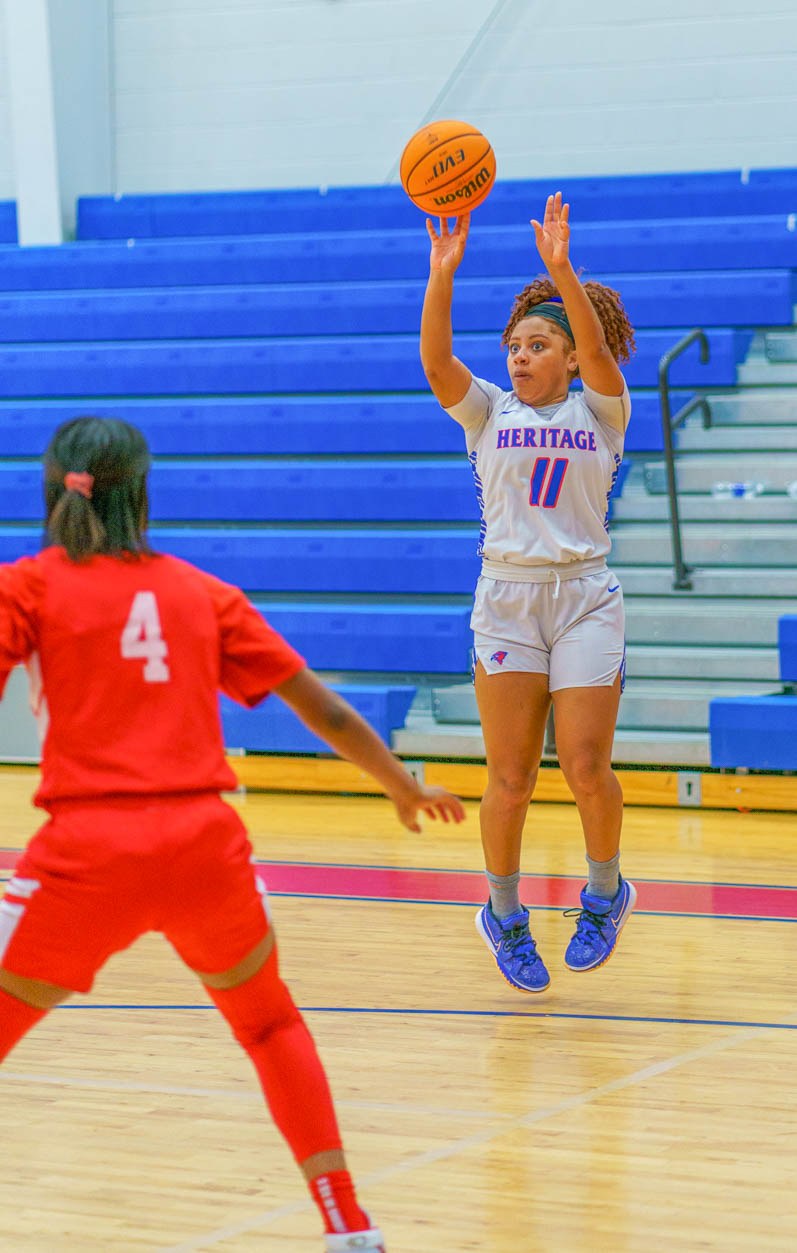 Ianna Odulaja can score from all levels. She hits the jump shot here, but she can also drive and create in the lane. 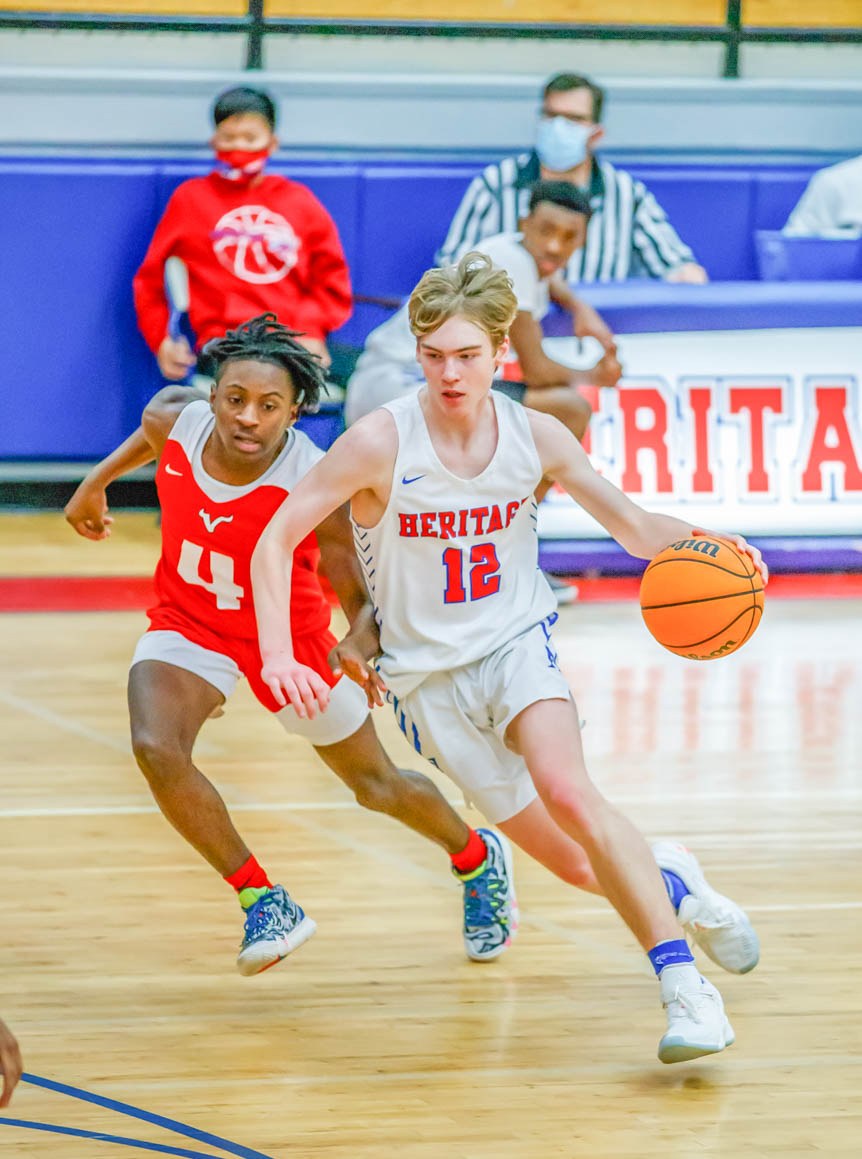 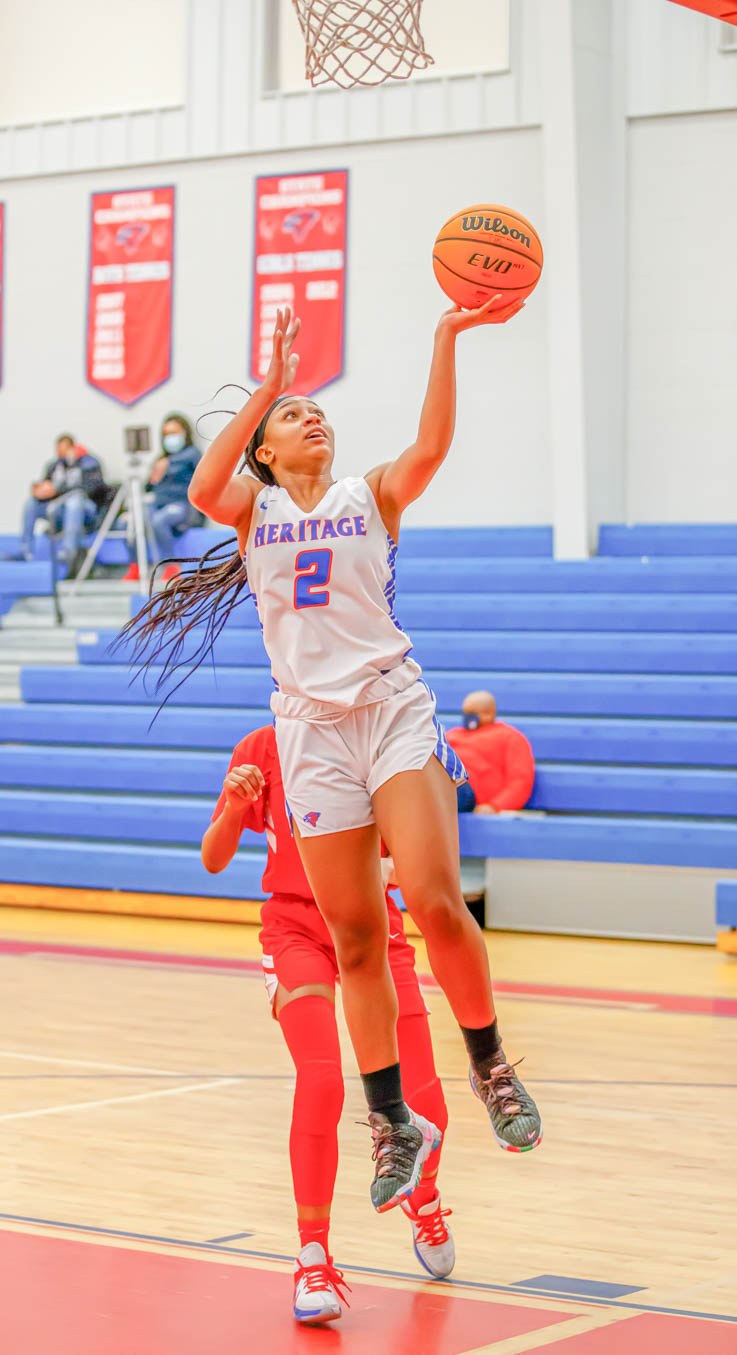 Quinn Wall with two of her 13 points. She also added seven rebounds. 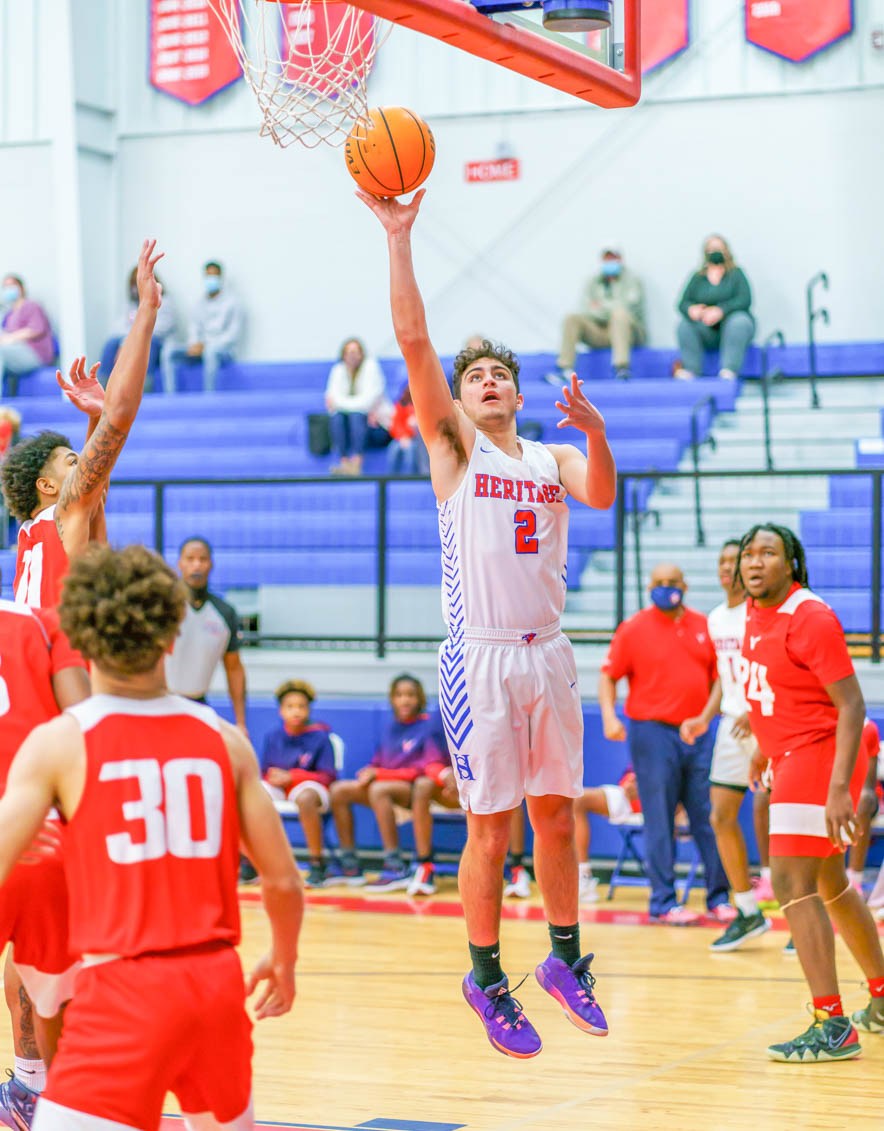 Leath Haddad with a rare easy two points against the state-ranked Vikings. 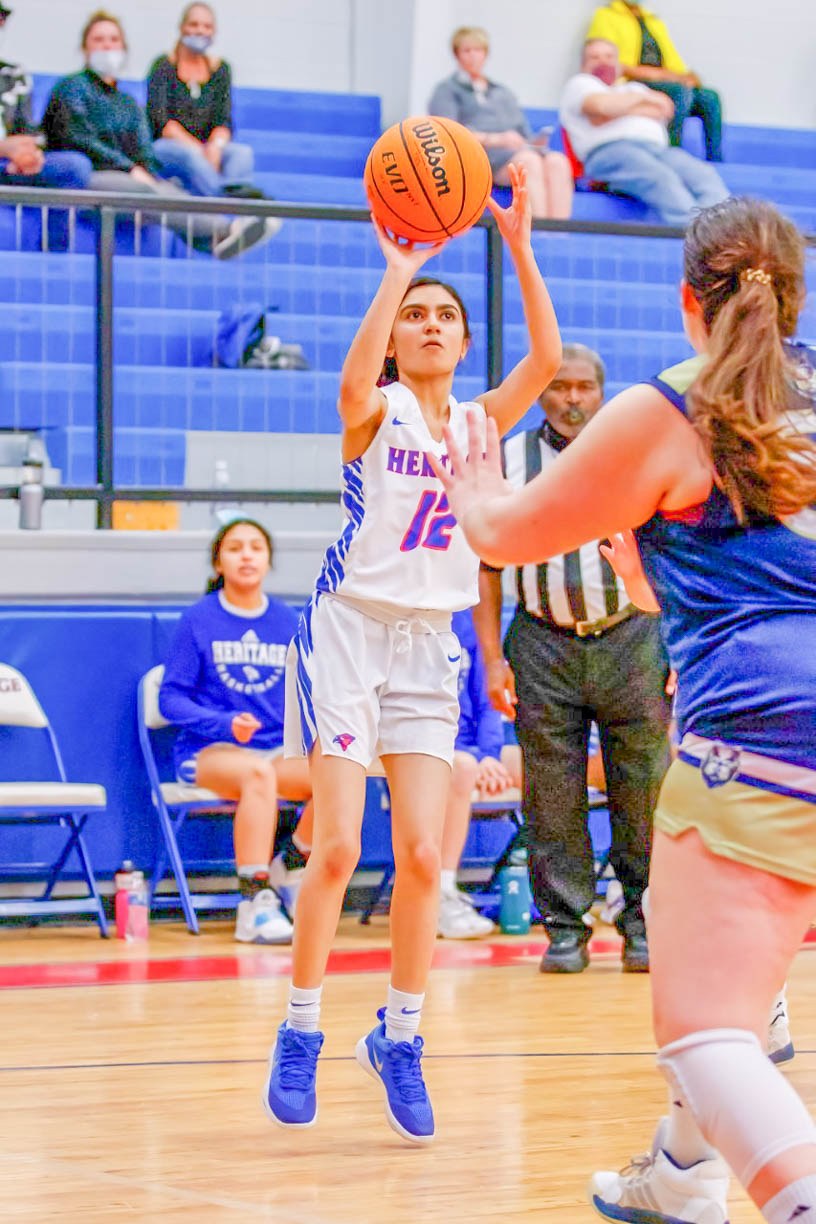