Two Coweta educators hitched their wagons to a S.T.A.R.

East Coweta High School’s Scott Ondovchik and Northgate High School’s Cassandra Scott crossed paths with the Centre’s S.T.A.R. program as students. Together they helped bring it back as teachers.

The Superintendent's Theatre Arts Resource, or S.T.A.R., is a summer production held by the Nixon Centre for Performing and Visual Arts that involves students and teachers from the East Coweta, Northgate and Newnan high schools.

The artistic direction of recent S.T.A.R. productions have been headed by Newnan residents and Coweta educators Scott Ondovchik and Cassandra Scott.

Ondovchik and Scott first became involved with S.T.A.R. as students in the July 2006 “Centre in the Gardens” S.T.A.R. performance of “Midsummer Nights Dream” at the Dunaway Gardens Amphitheatre.

Scott said she was a high schooler working on the Shakespeare production as a stage manager when she met Ondovchik, who was in college.

Ondovchik said he had been involved with theater in Coweta since moving there for high school and had gotten to know the late Donald Nixon, who was the director of the Centre during that period.

“They were looking for someone to come in and play the role of Oberon, and he asked me, so I came in and played that role,” Ondovchik said.

Ondovcik and Scott crossed paths with the S.T.A.R. program again in 2017, this time as colleagues.

“S.T.A.R. went away for a couple of years, and after Mr. Nixon’s passing, one of the things Mrs. Nixon really wanted to bring back to the Nixon Centre was the S.T.A.R. program,” Ondovchik said. “Cassie and I both having experienced S.T.A.R. and worked with it, both kind of jumped at the opportunity and were like ‘Yes, we really wanna be involved.’”

The first show they directed together was the 2017 S.T.A.R. production “Hairspray.”

Ondochik said during this period he and Scott became friends.

Ondovchik said although he’s only known Scott for four years, “It feels like we’ve known each other all our lives.”

“Theatre was never meant to be a solitary job,” Scott said. “Because of the way our programs are structured, we are the director, we are the lighting designer, we are the sound designer — We have all of those jobs.”

“I think that’s one reason why we love summer, too, because we have someone to bounce ideas off of and we have a technical team at the Centre,” Ondovchik added.

Scott said as theater educators, she and Ondochik face specific challenges. They built a friendship based on that camaraderie and mutual respect.

Working with Ondovchik is what Scott says allows her to have fun with directing.

“You have to have people in your life that are go-with-the-flow,” Scott said, “We have so much fun, and he is such a fun person.”

“The thing that we’re putting on is called a play,” he added. “That’s the root of performance. Have fun with it.”

The two reminisced on their time directing Mary Poppins, the second S.T.A.R. show they worked on together.

“It was 12:30 at night right before opening, and it was just the two of us on stage painting the stage black,” Ondovchik said.

“It was during Mary Poppins because it still had the prints from Hairspray the year before, and we were just...hysterically laughing,” Scott added. “There is just something different about coming back and doing summer shows.”

Scott said she admires students that choose to spend their summer learning about performance and feels reenergized by their eagerness to perform.

“You don’t do something that is so hard and so different unless you’re passionate about it and you love it,” Scott said.

“Theatre is such a place that there isn’t that,” he said. “It always comes together, and we’re able to come together, and it doesn’t matter if you're from East Coweta or Northgate or Newnan. Now you’re a part of S.T.A.R..”

Ondovchik added that many lifelong friendships began with S.T.A.R., including the one between him and Scott.

From castmates to colleagues

Ondovchik and Scott went from being former castmates to colleagues and friends by happenstance when both were employed at their respective high school alma maters: East Coweta High School and Northgate High School.

Scott said she was interning at the Centre during S.T.A.R. when the late Donald Nixon suggested she apply for a job at Northgate High School.

Scott took his advice and became the drama instructor at Northgate High School in 2012.

“It was awesome, and it was a great thing that happened here while I was here with him. He was one of my greatest mentors,” Scott said.

“What a blessing it is to create a show with other people and to tell other people’s stories. It all just revolves around...love,” Scott said.

Scott said she loves working at the school where she found her love for stage management.

“It's been really awesome to come back and teach with teachers who taught me,” she added.

“My mom got us tickets to go see Little Shop at the Fox,” Scott said. “That was definitely where I was like, no matter what I do with my life, I want theater to be a part of it.”

Unlike Scott, Ondovchik did not start out as the drama instructor for his high school alma mater.

Ondovchik said when he was a student at East Coweta, “There was no theater program; the closest thing they had was chorus.”

Ondovchik said he participated in chorus and local theater in Peachtree City.

“I only ever did one show in high school because that was the only opportunity I was ever given, which was ‘Oklahoma,’” Ondovchik said the show still holds a special place in his heart.

Ondovchik said he was struck by a professional production of “The Phantom of the Opera.”

”Ever since that first note of the ‘Phantom of the Opera,’ theater has just — it's stuck with me ever since,” he said.

Ondovchik said despite performing all of his life, he didn’t know theater would be a part of his career.

“Between that show and ‘Oklahoma,’ even when I went to college, I knew that I would always continue to do theater in the sense that I would support it,” Ondovchik said.

Ondovchik had begun working there as an English teacher in 2007 when Dr. Richard McMichen was the current drama instructor.

Ondovchik took over as the drama instructor and director of ECHOSTAGE in 2014 following McMichen’s retirement.

“He (McMichen) started in a classroom with desks and tables, and it continued to grow and grow until we got to the point that it is what it is today,” Scott said.

Ondovchik said he thinks students are drawn to ECHOSTAGE by a love for theater.

“I hope what keeps them there is the sense that everyone is loved and accepted, and it becomes a family environment. I think that can be said for all theater programs,” Ondovchik said.

To Ondovchik youth theater is “a first great step into empathy.”

“In high school something clicks where they’re able to go, ‘Okay this person is different than me, but I can appreciate their difference,’” Ondovchik said. “That’s something that can really be taught through theater.”

The Centre’s S.T.A.R. performance was canceled last year due to COVID-19.

“We’re all going through this together. Especially right now with the COVID stuff — literally having to rethink how you do theater during COVID times,” Ondovchik said.

Ondovchik said he and Scott work well together because they are like “yin and yang,” and he hopes they can work on a S.T.A.R. production again.

Scott said she is reminded of Ondovchik and all of her friends when she hears the “Hairspray” song “Come So Far.”

“The song that is not in the musical, but it’s in the movie credits,” Scott said. “‘Hey let's look back at the crazy things we wore.”

“It talks about...friendship and going through it, and how much you change. I think that works perfectly, and ‘Hairspray’ was the first show we did together here,” Scott added.

“I really think that theater saves lives in the sense that when you get kids involved, it keeps them focused,” Ondovchik said, “It helps with kids reading. It helps with their studies.”

“The more we show up to theater, the more it will be supported,” Scott said. “If we had theater in our elementary schools, we would have empathy training from a young age, too. That would help not only the theater world, but the world across the board.” 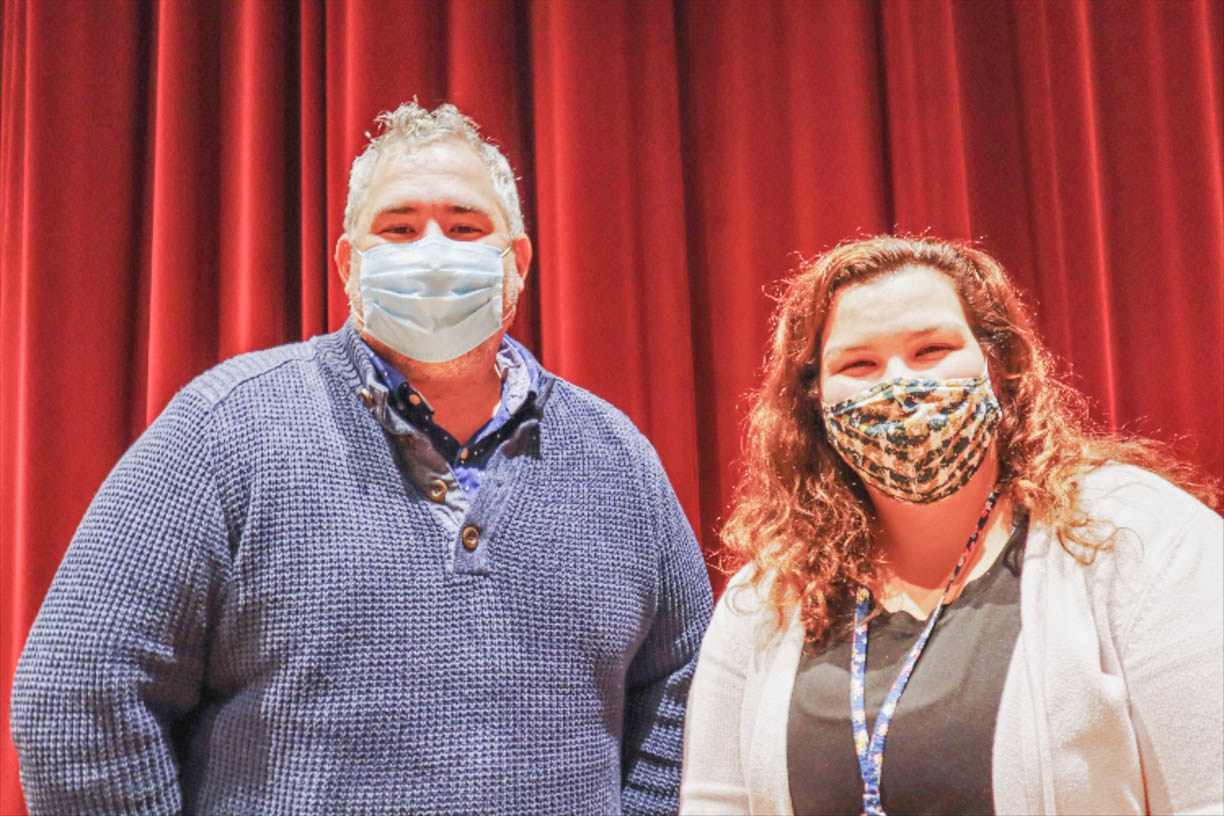 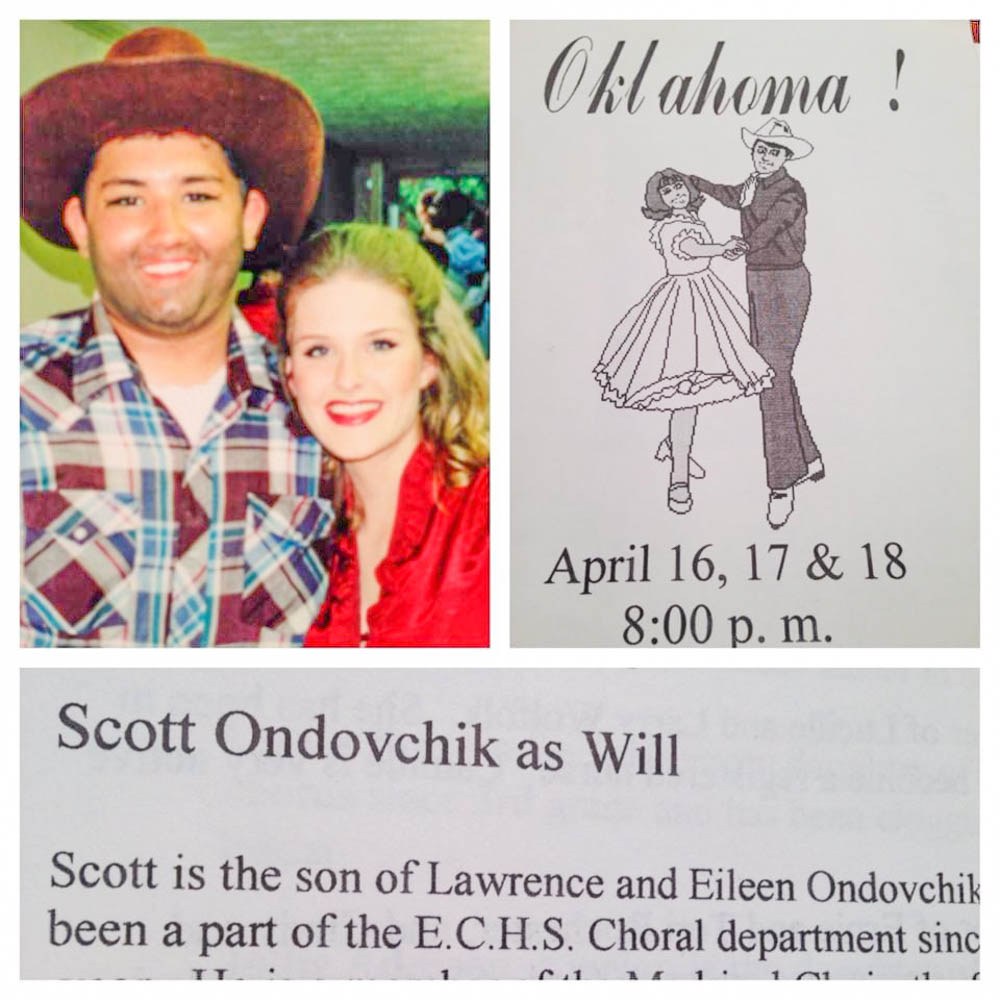 Ondovchik as Will in East Coweta High School’s 1999 production “Oklahoma.” 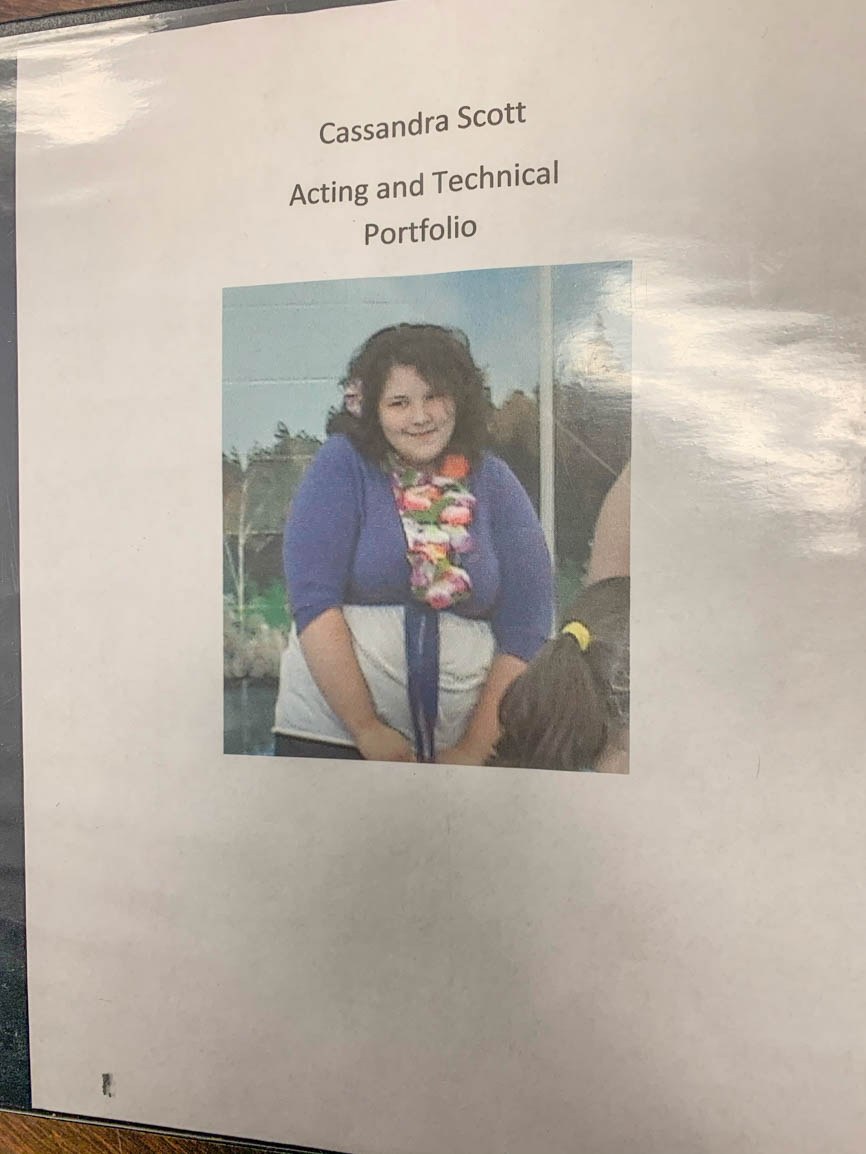 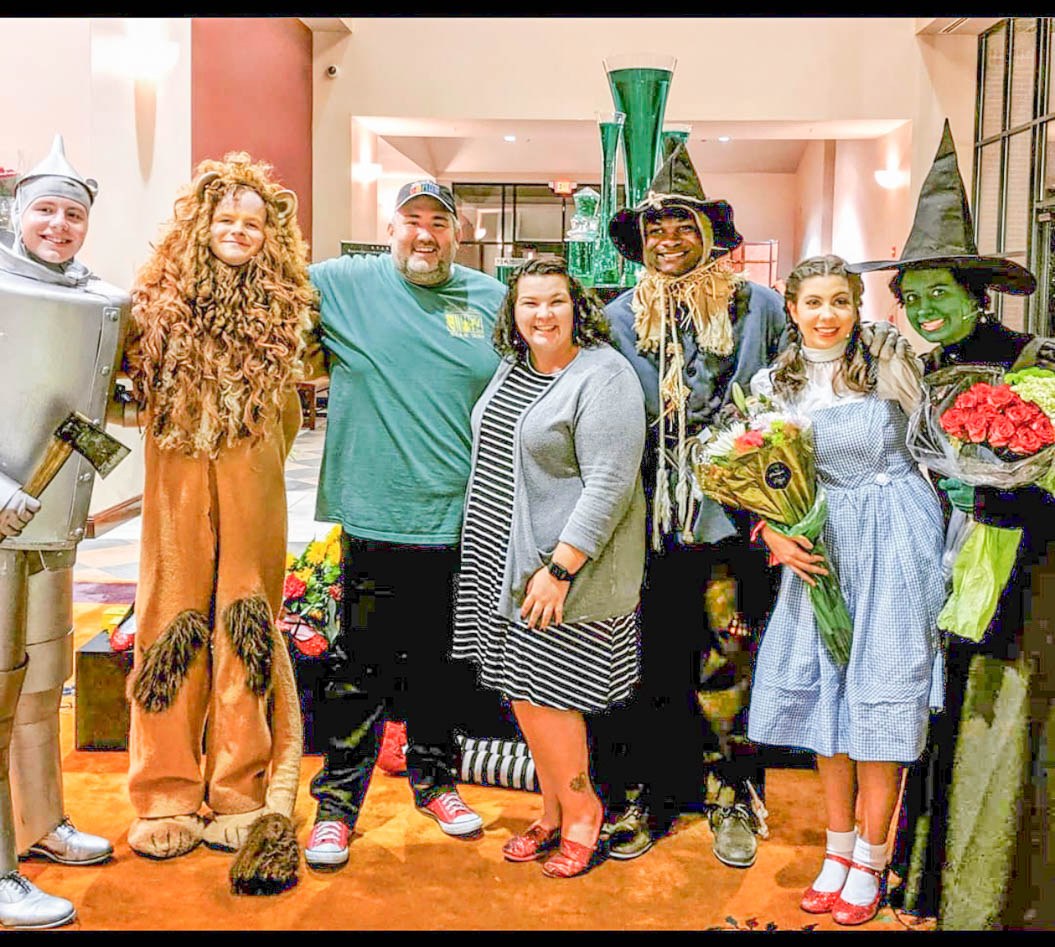 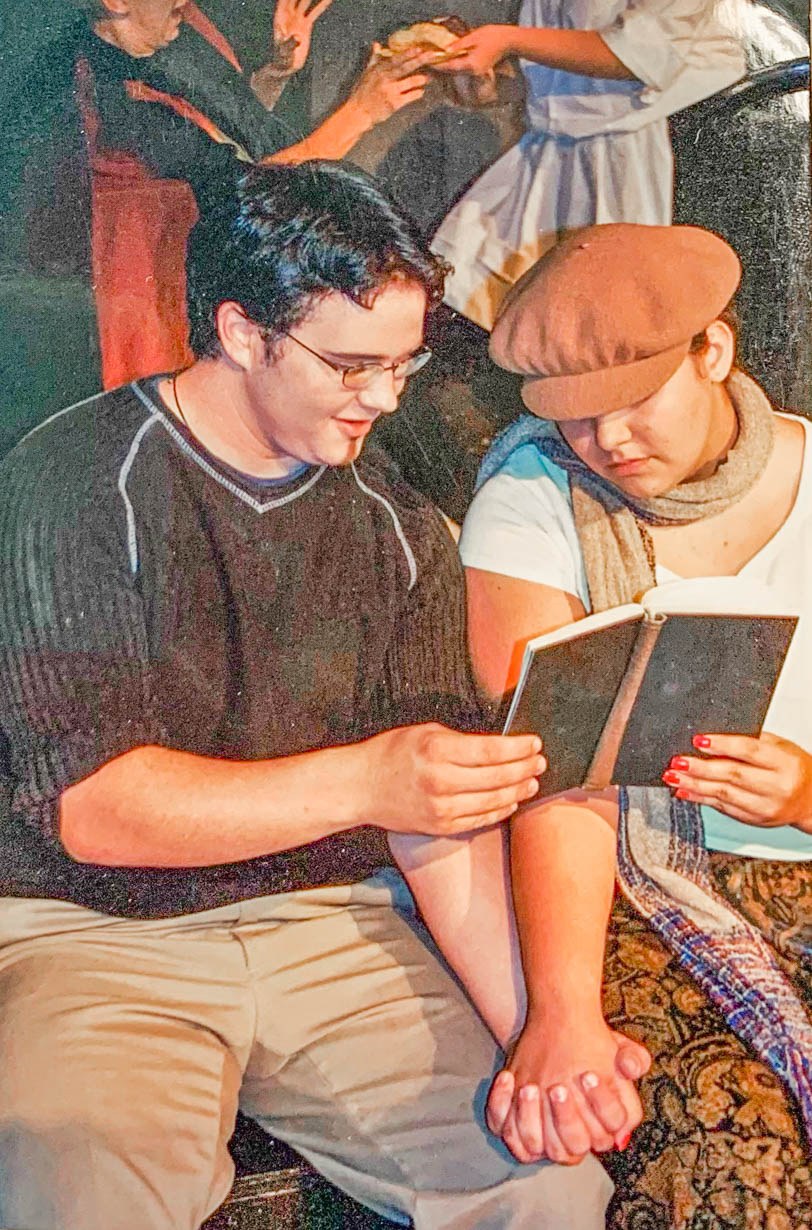 Cassandra Scott performs in Northgate High School’s Backstage Players production “All in the Timing” at the Nixon Centre for Performing and Visual Arts.