While the Trinity Christian football team prepared for their second-round playoff matchup, both Lions basketball teams have ramped up quickly and are poised to justify early rankings.

Going into this week’s action, the boys were ranked eighth and the girls ranked ninth. On Tuesday night, they welcomed their cross-town rival, the Trinity Christian War Eagles, for a midweek matchup.

Both games came down to the final seconds, the boys pulled out a 56-53 victory, while the girls lost a one-point heartbreaker 61-60.

The Lady Lions fell behind in their game against Landmark as the Lady War Eagles got 10 points in the first quarter from Joy Butts to take a 16-9 lead after one. Trinity Christian fought back in the second quarter.

Their defense did a better job of pushing the Landmark guards out further and that resulted in a 13-0 run. When senior Anna Denes, who just signed to play at University of Alabama Birmingham hit a three as the half ended, the Lady Lions had a 30-26 advantage.

Mattie McCracken opened the third quarter with back-to-back threes to push the Trinity lead to 40-30 with five minutes remaining in the third quarter. That is when Landmark made their move, led by Butts and Gabby Grooms, Landmark outscored Trinity 25-11 over the next eight minutes, and when Lalah Logan scored with the two minutes left, Trinity was back within one at 57-56.

Grooms sealed the game with a basket for the Lady War Eagles’ one-point victory. Denes scored 21 points, and Ashlyn Settle chopped in 10.

The Lady Lions got back into the winners’ column on Thursday night when they defeated the Class 4A Blessed Trinity Lady Titans 55-40. Madison Morge led Trinity Christian with 22 points to improve the Lady Lions to 2-3 on the season.

Trinity Christian boys head basketball coach Will De La Cruz saw his team get off to a slow start as well. When Landmark’s Ian Iverson nailed a three with a minute left in the first quarter, the Lions found themselves down 17-7. But that changed quickly; Sami Pissis scored on a burst to the basket, Jackson Barnes made a three and Tai Peete scored off a steal, and suddenly it was 17-14 at the end of the quarter.

It was the start of a 22-5 run for the Lions, who took a 33-27 lead into the half. With the guard combination of Pissis and Isaac Brito constantly slashing the lanes and getting to the basket, the War Eagles finally switched to a 2-3 zone early in the third quarter. It was a move that slowly pulled them back into the game. They got a couple of stops on defense and guard Dylan Span was scoring at will with his quick shot of the dribble.

Span gave Landmark the lead in the fourth quarter when his step-back three made it 50-48. But Trinity took control of the game from that point on. Barnes tied the game back up for the Lions, Brito scored and followed that with a tremendous, blocked shot and hit a three after a Barnes steal. Trinity Christian held on for the three-point victory from there.

Coach De La Cruz said the defensive game plan was simple, “We didn’t want #2 (Span) to get the ball and get comfortable, we wanted to force their other guys to make plays.”

Brito led the Lions with 20 points and 12 rebounds, while Barnes contributed 19 points as well.

Both teams will be back in action next Friday on the road at Galloway in Atlanta. 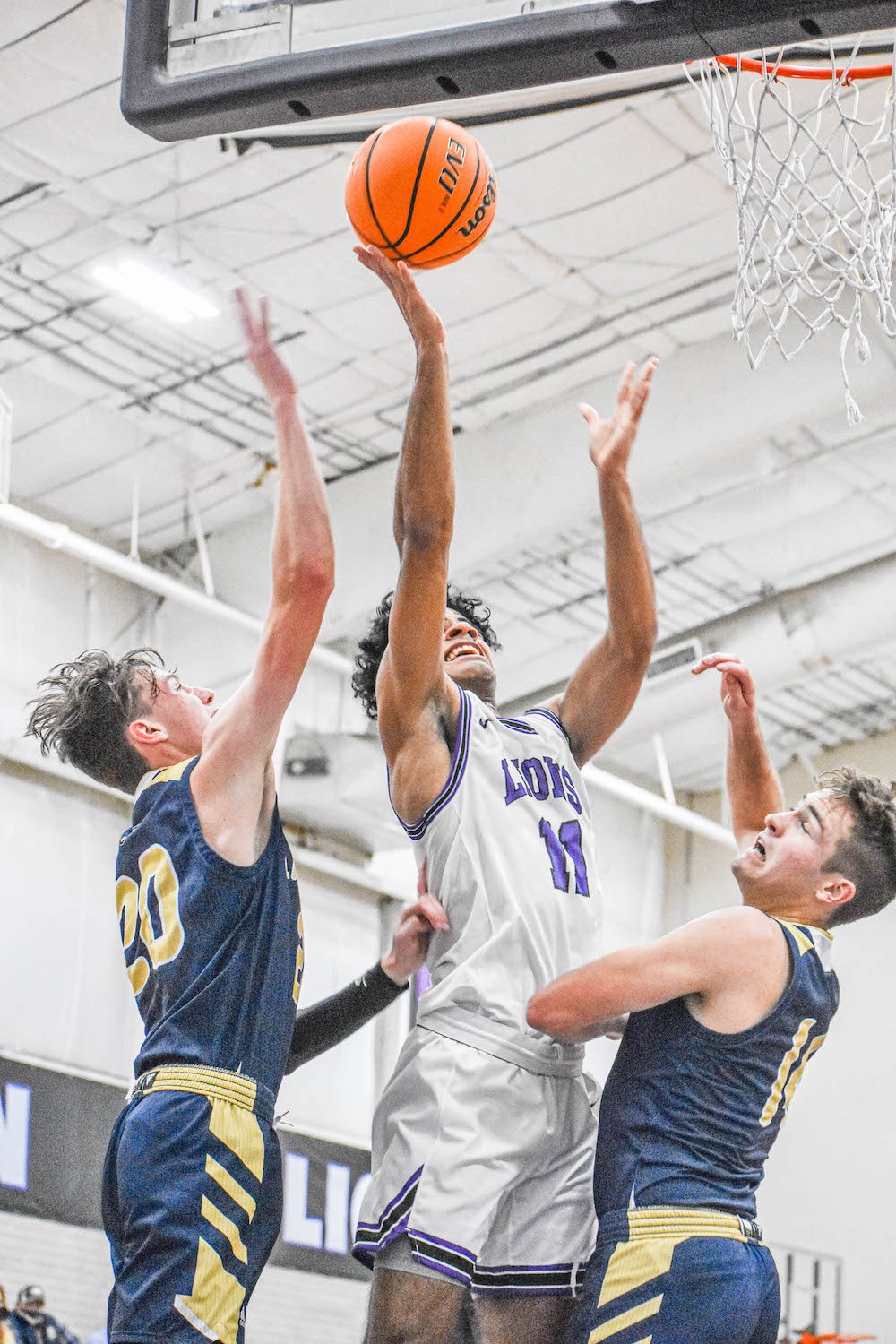 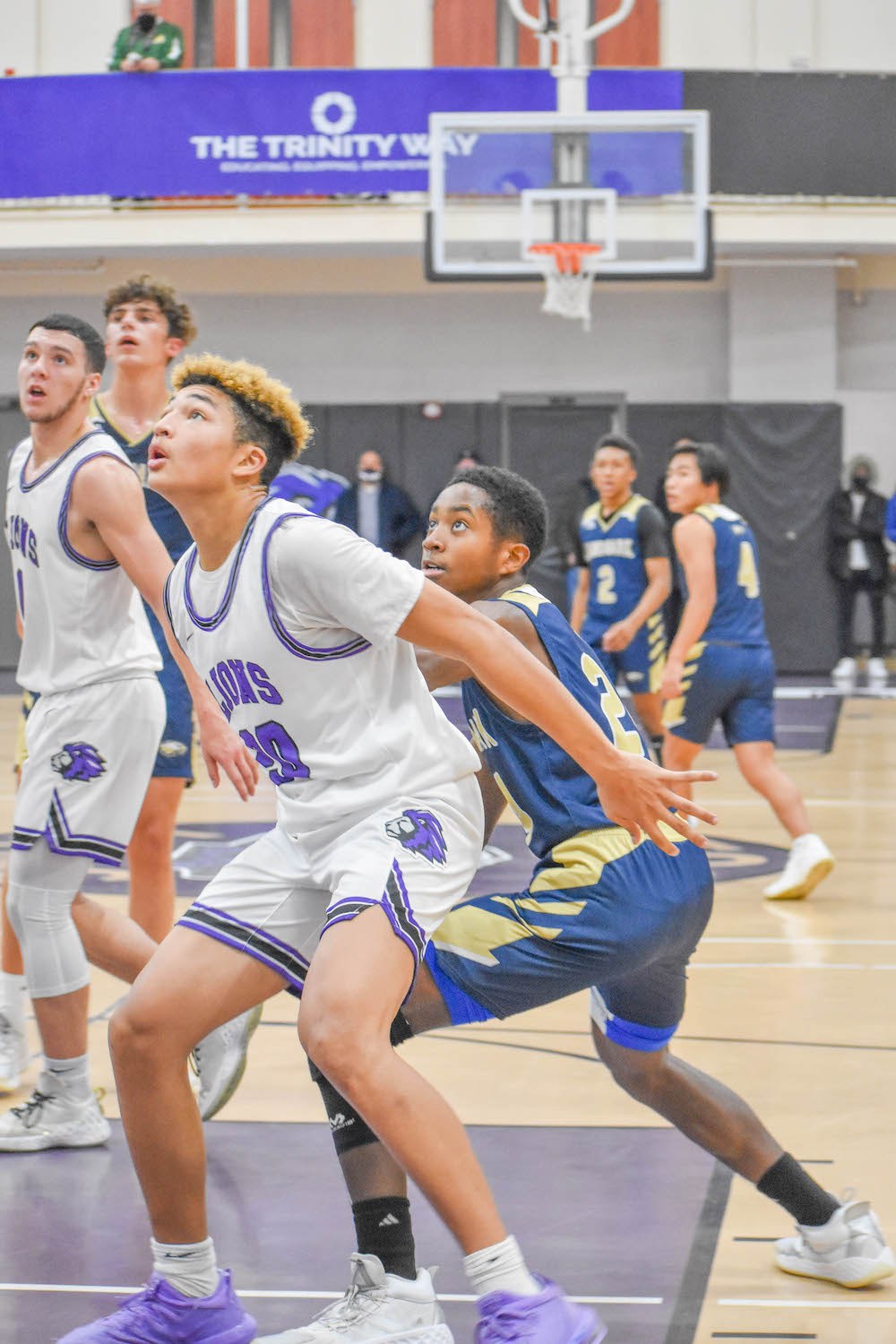 Tai Peete with a block under the boards. 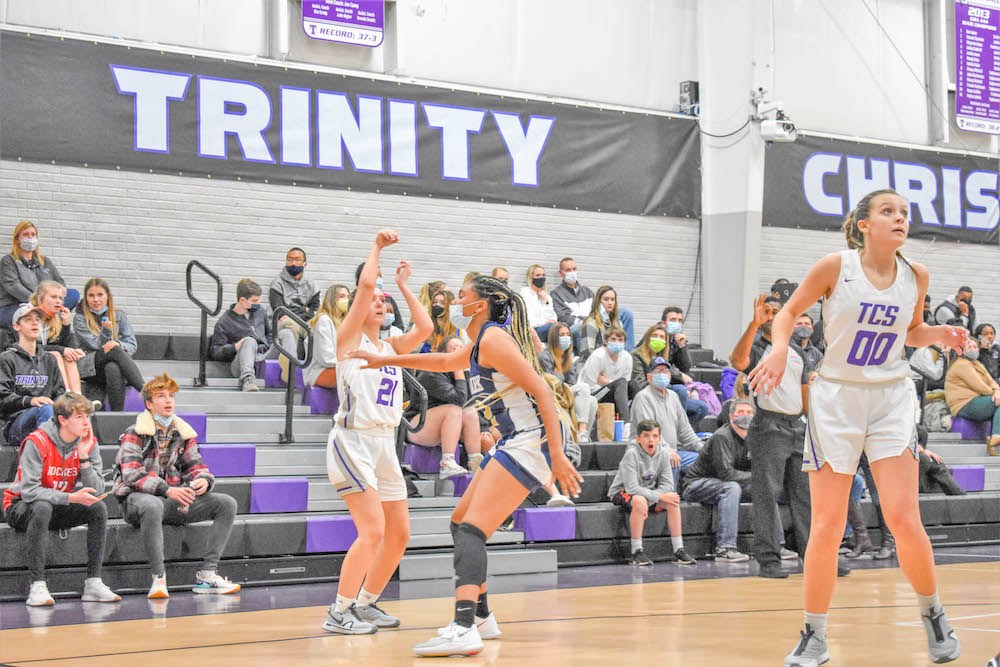 Mattie McCracken with one of her three 3-pointers for the night for the Lady Lions. 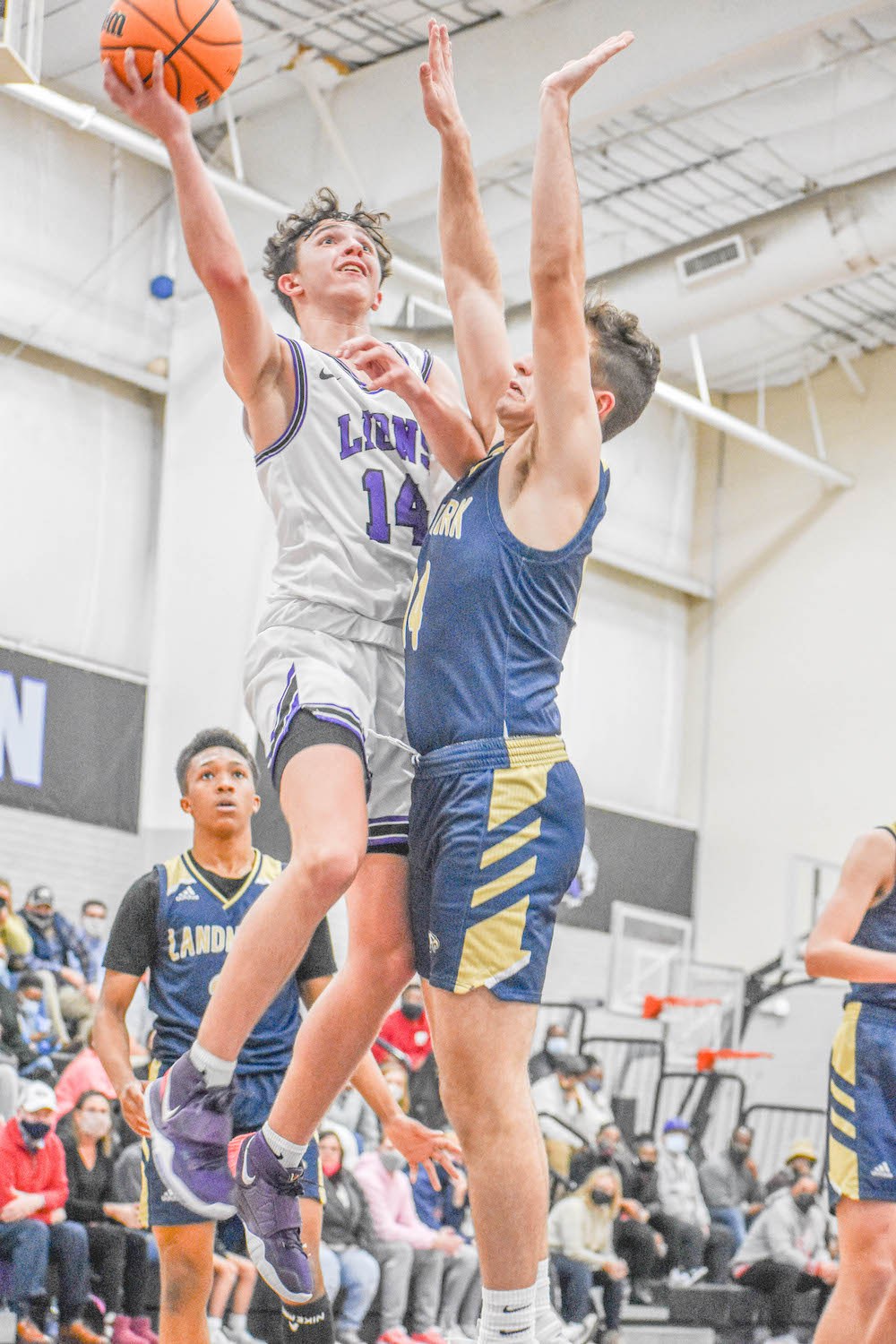 Jackson Barnes had 19 points and three 3-pointers for the Lions. 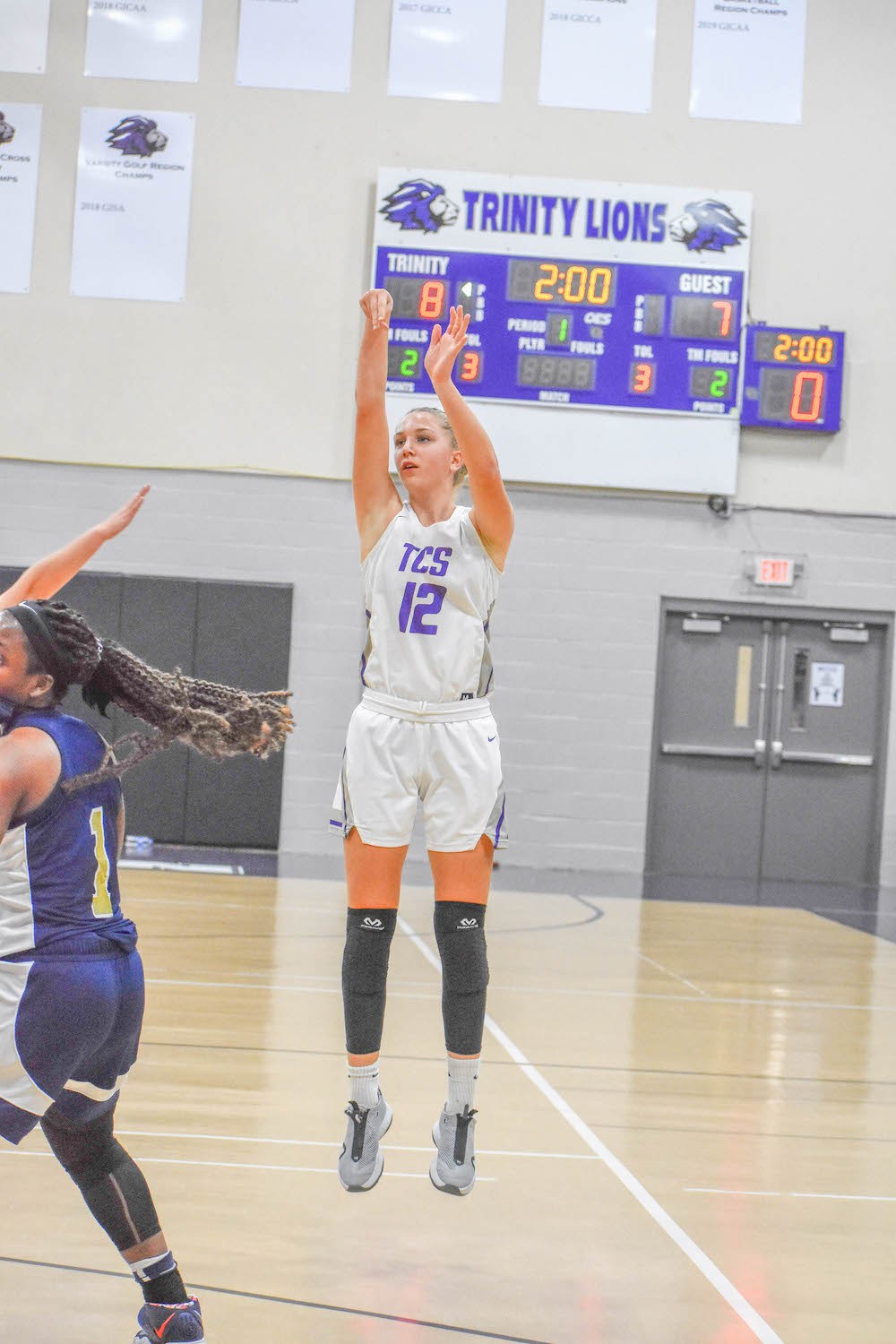 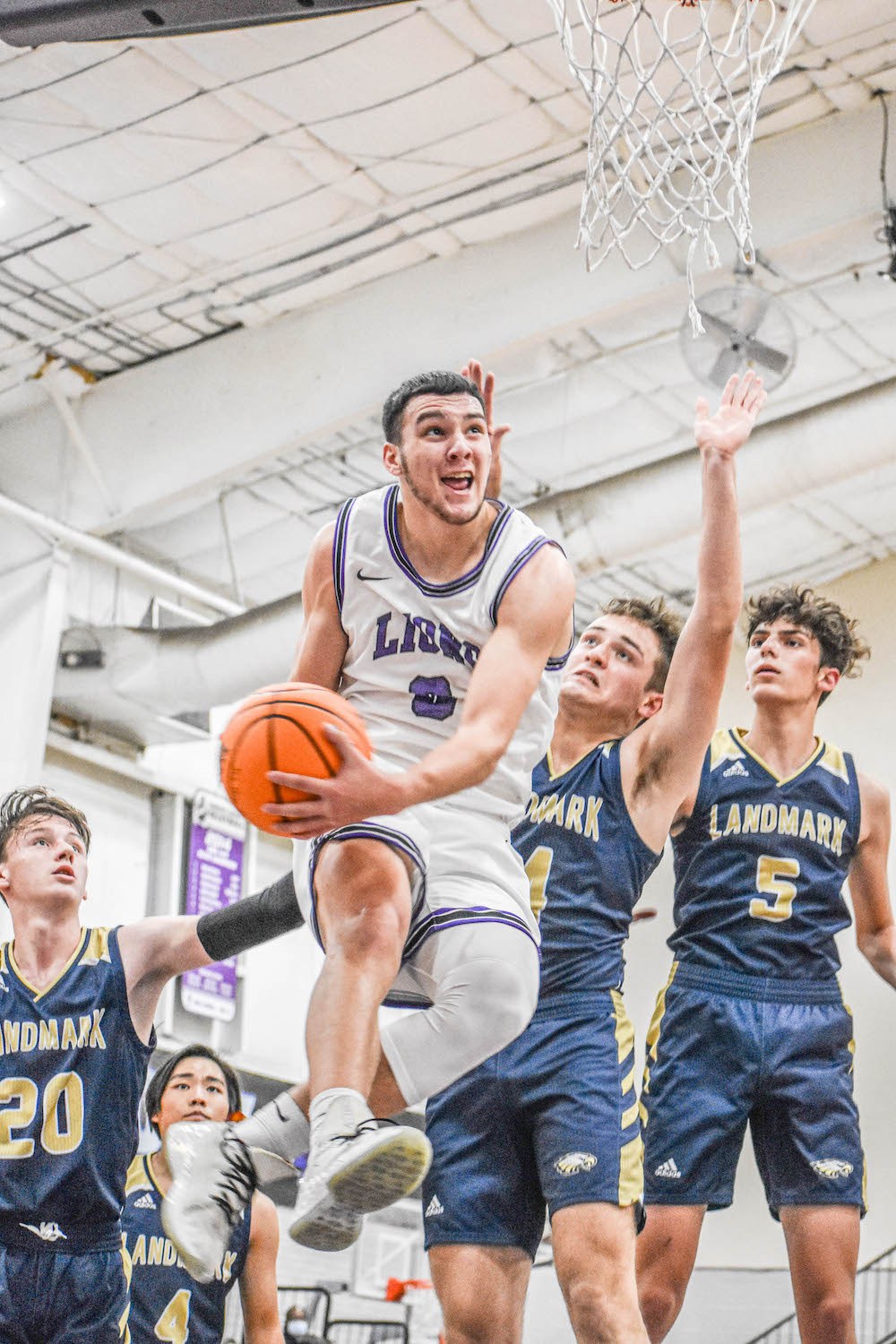 Sami Pissis with a drive to the basket to break the Landmark zone defense.