Peering into the past

As the city of Newnan begins looking towards the future of Caldwell Tanks, the Newnan-Coweta Historical Society is preparing a deep look into its past.


In summer 2019, NCHS hosted a "Living in Coweta" lecture series where the history of the R.D. Cole Manufacturing Company was examined by Duke Blackburn, a sixth-generation Newnan member of the founding family.

R.D Cole Manufacturing was founded in 1854 in Newnan by R.D. Cole Sr. and Thomas Barnes, each paying into the business $750 and beginning operations on May 7, 1854.

However, Newnan residents petitioned the company to discontinue the use of said machinery, citing the ruinous economical effect that would result in the merchants of the community on account of these so-called labor-saving devices.

But the partners stood their ground and got very little business. The first-year gross amounted to $300.

Upon the retirement of Mr. Barnes in 1855, Matthew Cole and W.T. Cole became partners in the business. During the first few years of this partnership, coffins and cheap furniture were manufactured. It was at that time customary to build a "Tailor-made" coffin after an individual had died.

Mr. Cole decided to build a few and keep them in stock, and in so doing, he incurred the ill will of the community and the churches; the public charged that he wanted people to die so that he could make a sale.

During the Civil War, the plant was engaged in building wagons for the government and made very little progress during that period.

In 1870, they became agents for manufacturers of engines and boilers in New York State, and this was the reason for the adding of the foundry and machine shop in 1875.

R.D. Cole expanded into water tanks, some of which still stand today, manufactured in sections, hoisted into place with a series of winches, and riveted together using sledgehammers in those pre-welding days.

By the 1890s, R.D. Cole Manufacturing Company was the second-largest water tower manufacturer in the United States. In 1890, they designed, fabricated and erected their first Elevated Steel Tank at Washington, Georgia, and have pioneered in the design and improvement of this type of structure through the years.

The company has erected elevated tanks all over the United States and in numerous South and Central American countries. 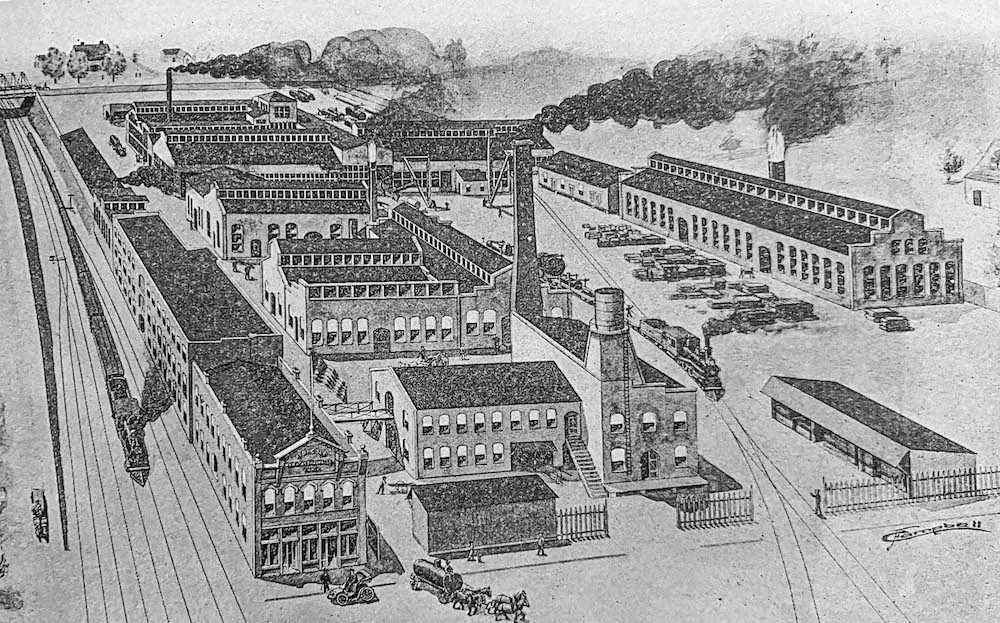 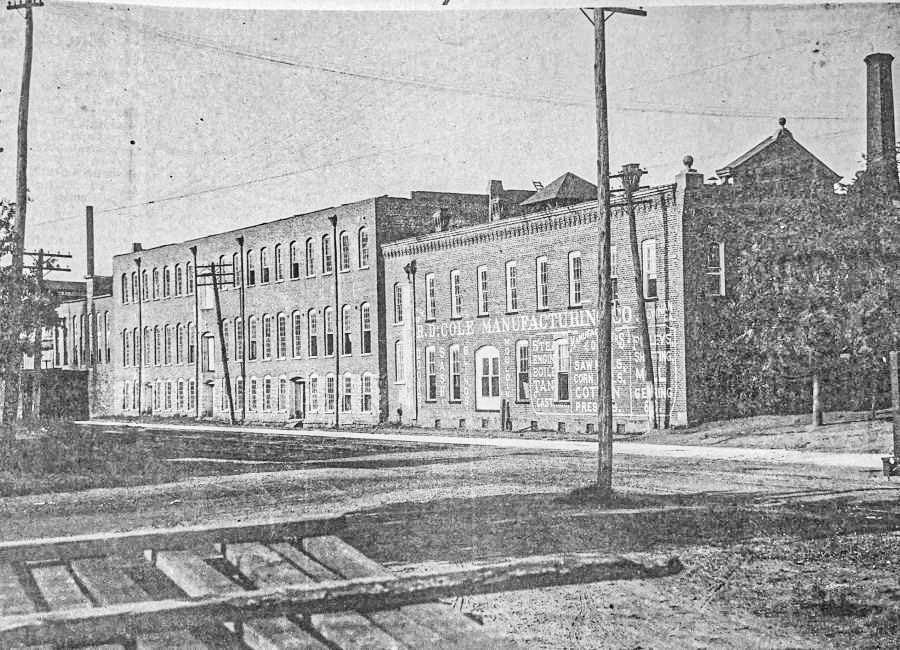 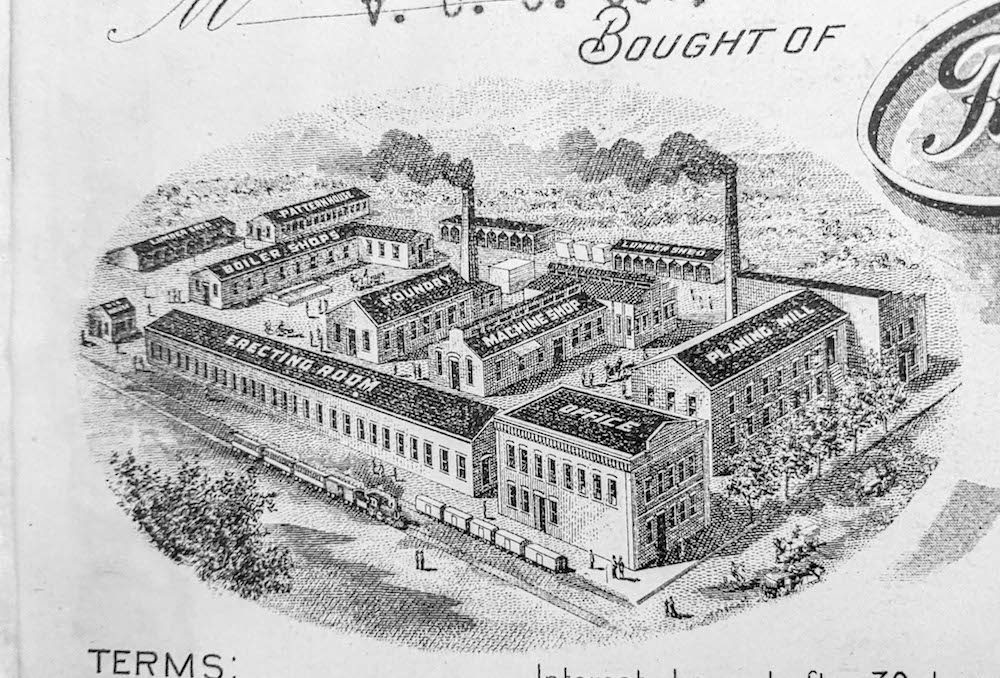 During the preparation for the event, NCHS Executive Director Emily Kimbell was given access to a treasure trove of the family's history featuring a slew of items never seen before outside of the immediate family.

"It was amazing to see so many family artifacts," she recalled. "R.D. Cole touched almost every aspect of this community, so it got my wheels turning."

With the blessing of Duke and Lynn Blackburn, Kimbell has spent the last year combing through the number of artifacts as she prepares to publish a photographic history of R.D. Cole Manufacturing.

The proposed book would contain a large volume of family images, photographs from the company, details on what the company produced and photographs of artifacts.

The publishing deal is tentative, and the book should be ready by Fall 2021, if all goes according to plan. 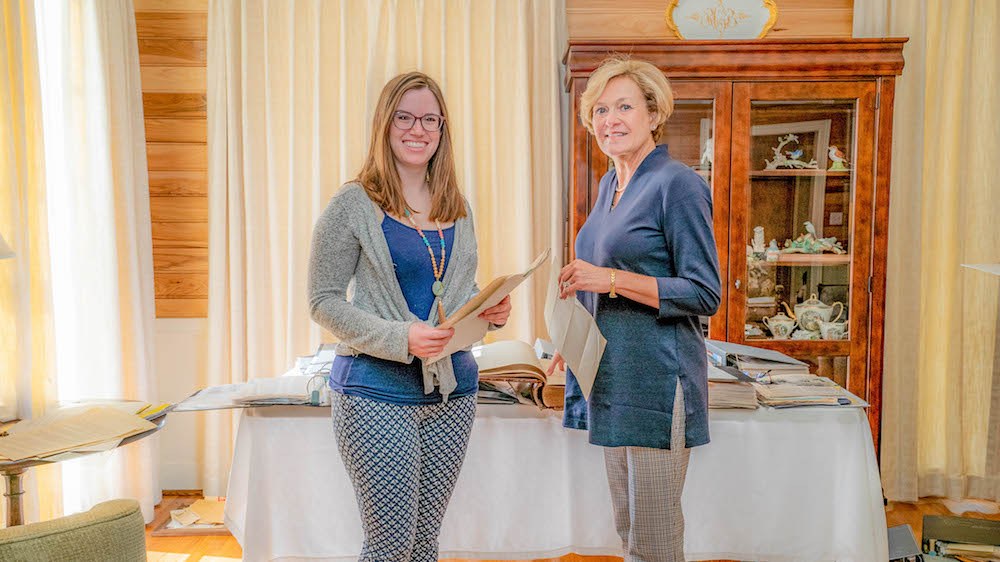 NCHS Executive Director Emily Kimbell and Lynn Blackburn sort through a number of family artifacts in the Blackburn home.

Bernard Fineman had a feeling about the cornerstone.

The longtime president of Caldwell Tanks recalls purchasing the R.D. Cole Building from Brown Steel Contractors in 1999. He'd known about the history of the building from being in the industry, he said.

"When I saw the cornerstone, I always teased people about a time capsule being inside the stone," he said. "In older buildings, there's usually some type of history of the time placed beside or inside the cornerstone."

As their company prepares to transfer the property over to the city, Fineman knew this was his chance to finally discover if the rumors were true. After much teasing from Fineman about the prospect of a time capsule, Scott McIntire, quality assurance manager with Caldwell, hired a local company to utilize ground-penetrating radar on the cornerstone.

"Sure enough, they could determine there was a void inside the stone," Fineman said. "Then Duke (Blackburn) told us the family rumors about the R.D. Cole days and something buried inside the stone."

With two rumors about the capsule, along with the positive results from the ground-penetrating radar and the imminent sale of the building, Fineman and McIntire knew it was time to find out for sure.

On Nov. 5, 2020, the group gathered at the corner of the building and began the process of extracting the cornerstone from the building. Through the use of a concrete saw and prybar, crews slowly removed the cornerstone. As each brick was removed, a small copper plate on top of the stone slowly revealed itself.

"When we saw that plate, that's when things started to get interesting," he said. 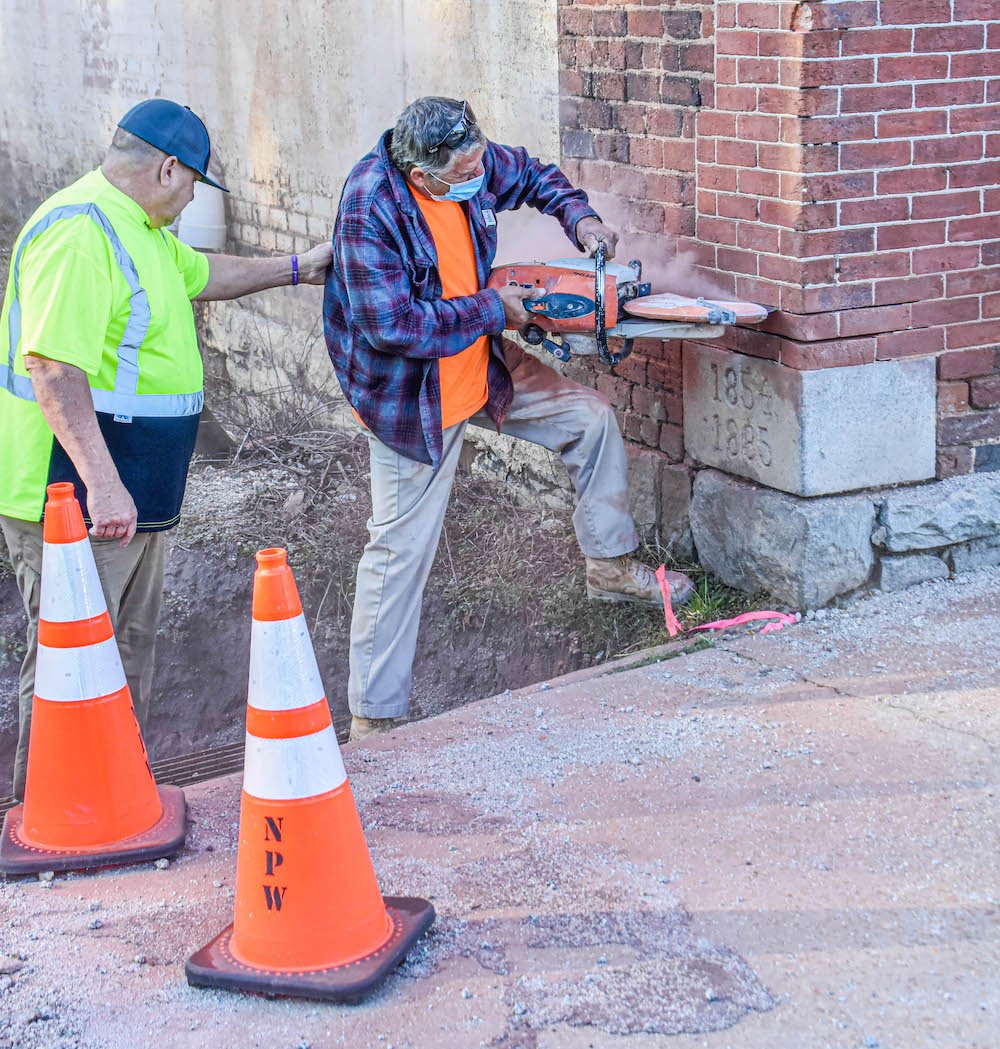 Workers begin to cut into the R.D. Cole building and attempt to extract the cornerstone from the foundation of the building.


Eventually, the stone was extracted from the building and the copper plate was removed. Inside the stone contained a fragile parchment, which was later determined to be a copy of the Newnan Herald from 1885.


Will Blackburn was on hand during the extraction and eventually took home the 135-year-old newspaper. He believes it might be the exact date when the cornerstone was put into place for the office building.

Blackburn’s great-great-great-grandfather, Mathew Cole, and Cole’s father, Robert Duke Cole Jr., put the cornerstone in place, along with their workers in 1885, according to Blackburn.

Duke and Lynn Blackburn said they were thankful for being invited to the cornerstone and hope the mayor and city council will find a way to preserve the historic office building for future generations.

“This building represents a tribute to the many highly talented and dedicated employees who depended on the company for their livelihoods for over 100 years,” Blackburn said. “A company that started because their wagon broke down in Newnan. To not let this landmark dwindle away as they did with the Old Railroad Depot and the Old County Jail.” 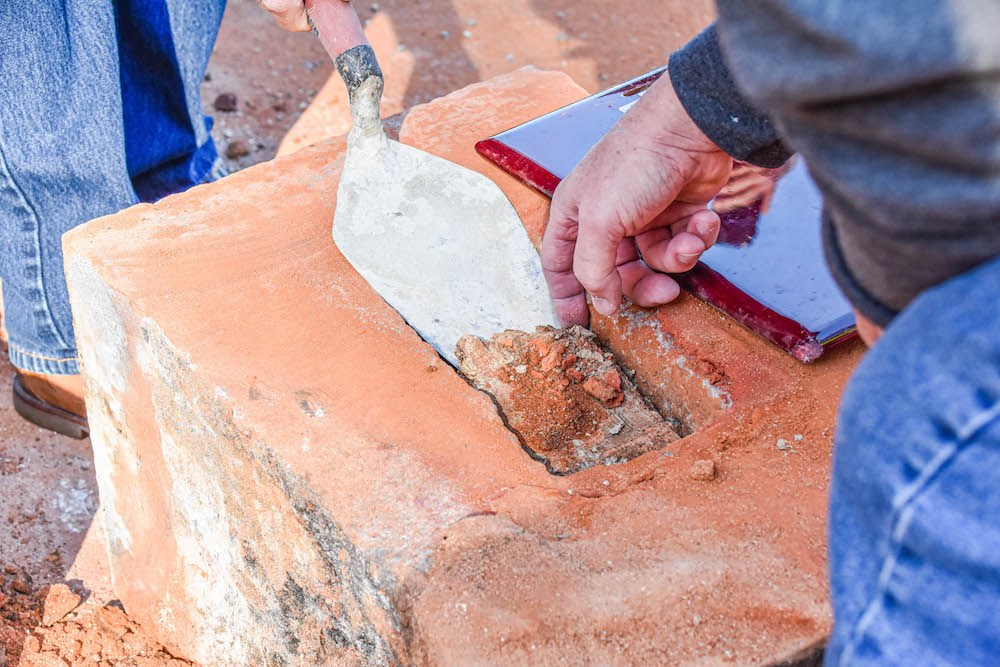 Mayor Keith Brady and Scott McIntire attempt to remove the 135-year-old newspaper from the cornerstone. 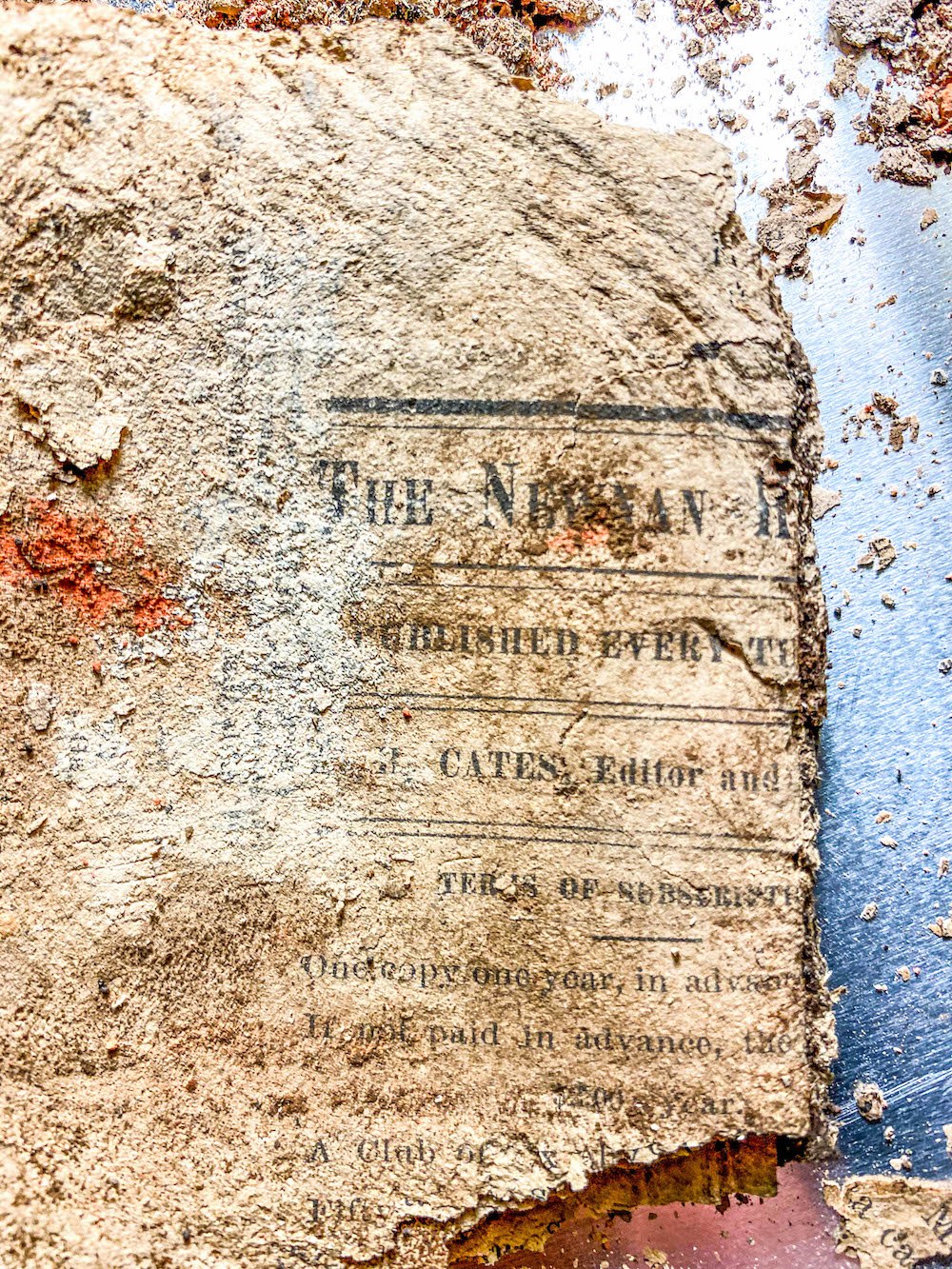 The remains of the March 1885 edition of The Newnan Herald. 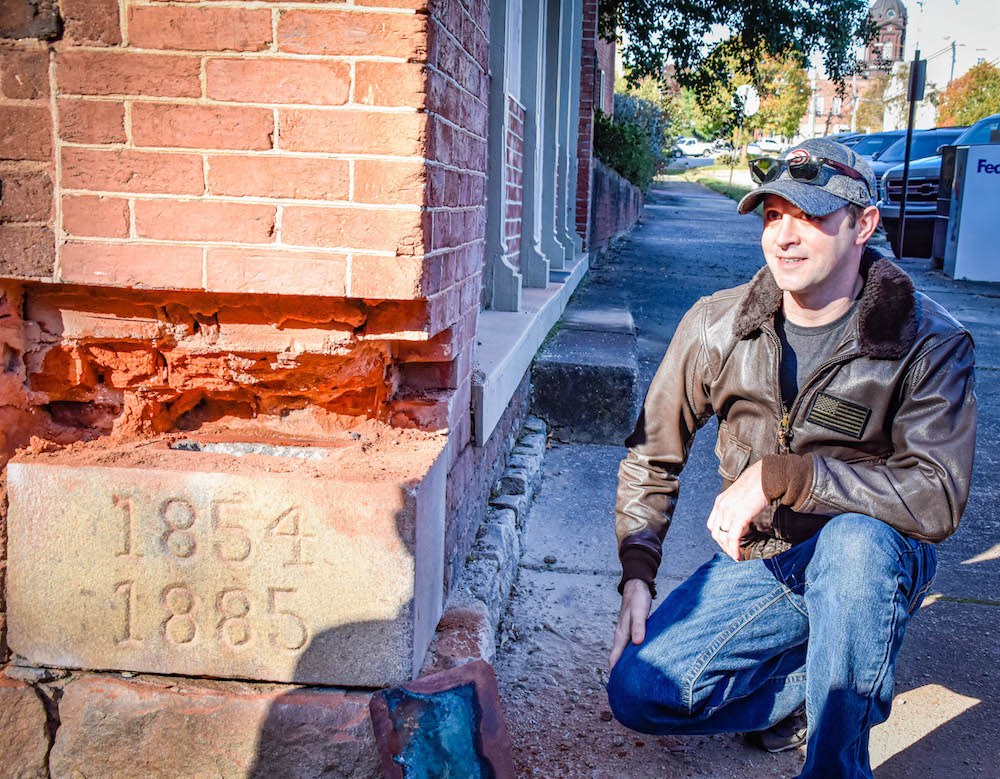 Will Blackburn kneels next to the cornerstone that was placed by his ancestors in 1885. 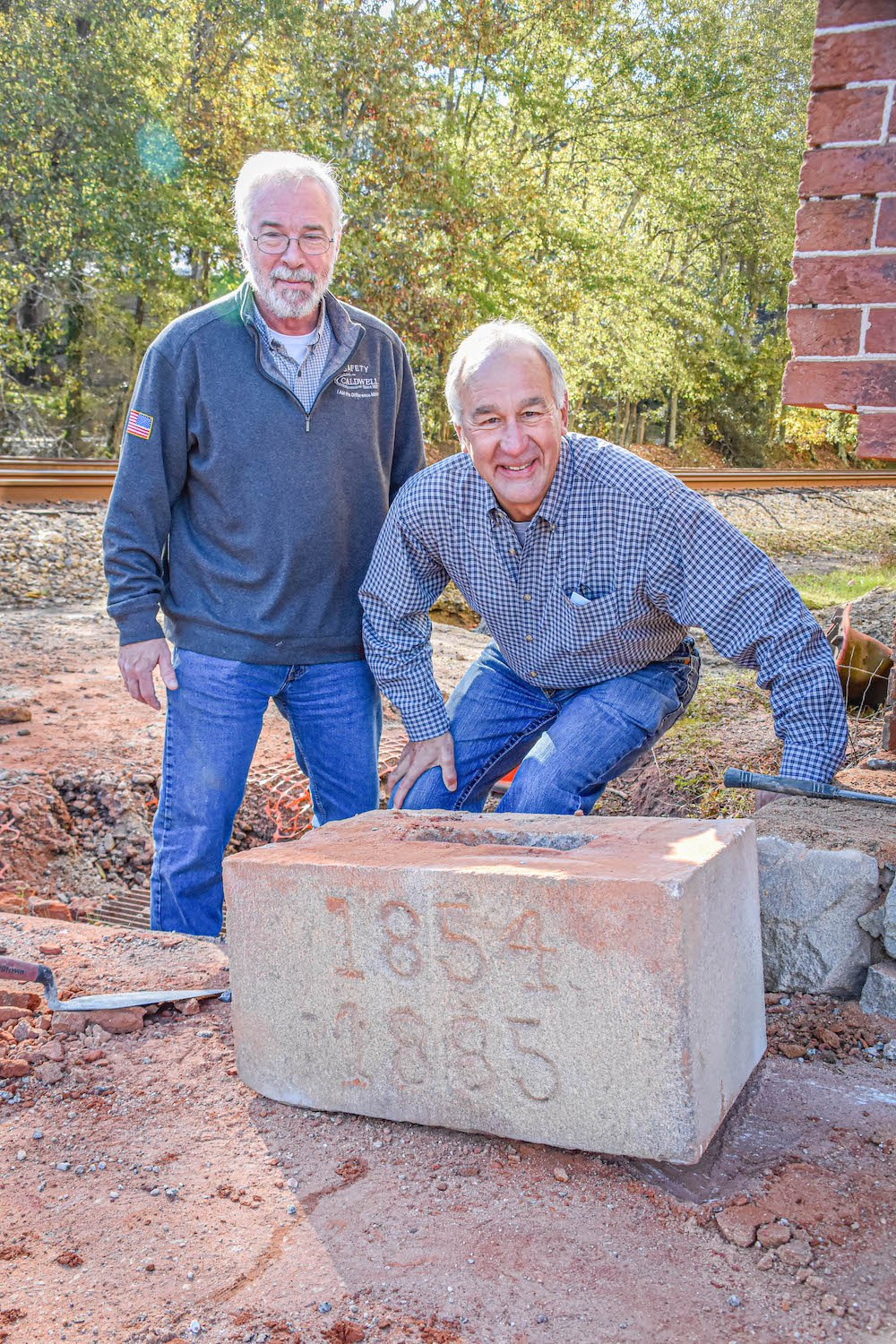 Bernard Fineman and Scott McIntire get closure after years of speculation about the contents of the cornerstone of the R.D. Cole Building.