Pet of the Week: Mitch

Comcast plans to expand broadband services in Grantville in 2021

In a year dominated with headlines surrounding the use of force by police, a new tool is literally being deployed.


The Newnan Police Department is looking to utilize BolaWrap – a tool based on the Argentinian bolero, a type of lasso.

The tool shoots an 8-foot Kevlar tether at 513 feet-per-second that wraps around the suspect and restrains them.

Each tether has a 4-pronged hook on either end. The tether and its hooks are contained in a cartridge.

Each cartridge contains and is powered by a partial charge .380 blank.

The tether works up to 10 to 20 feet, which is comparable to the taser which is currently used by both the police department and sheriff’s office but without the “shocking” effects.

BolaWrap was designed to be used on noncompliant subjects who need to be detained but are not responding to verbal commands of officers.

Before an encounter escalates to the point where lethal force becomes necessary, the BolaWrap can be deployed to help safely restrain a subject from a distance, without relying on inflicting pain to gain compliance.

Wrap Technologies representative Kevin Johnson provided a demonstration of the tool during a training session Monday at the Newnan Police Department. The product has only been around for a few years, but many agencies across the country are interested in the product, Johnson said.

Johnson, a retired police captain from Wilmington, North Carolina, and "less-lethal” training instructor, said he was blown away by the product after seeing it.

“It is particularly useful in dealing with someone experiencing a mental health crisis,” he said. “Those kinds of situations are common in law enforcement and this allows police to subdue the person without physical violence.”

So far, around a dozen agencies in Georgia are already utilizing the technology, Johnson said.

Police Chief Douglas “Buster” Meadows said he was inspired to bring the technology to Newnan after seeing an informational video.

In Newnan, 16 BolaWrap devices are expected to cost $1,000 each and will be put into service by Thanksgiving, according to Deputy Chief Mark Cooper.

Eight of those devices were donated by the Newnan-Coweta Public Service Foundation, a 501(c)(3) that helps supply local law enforcement with equipment often not found in their budget.

The foundation has provided specially equipped bicycles for police and fire departments, equipment for saving the lives of stroke victims, radio operated collars for the K-9 division of the sheriff’s office, and a variety of protective gear for police, according to Norma Hayes with the foundation.

"We are so happy to provide the BolaWrap equipment which is demonstrated today,” she said. "Our public safety personnel are experiencing untold stress and risks during this particular time, and we need to show our appreciation for what they do for all of us citizens.” 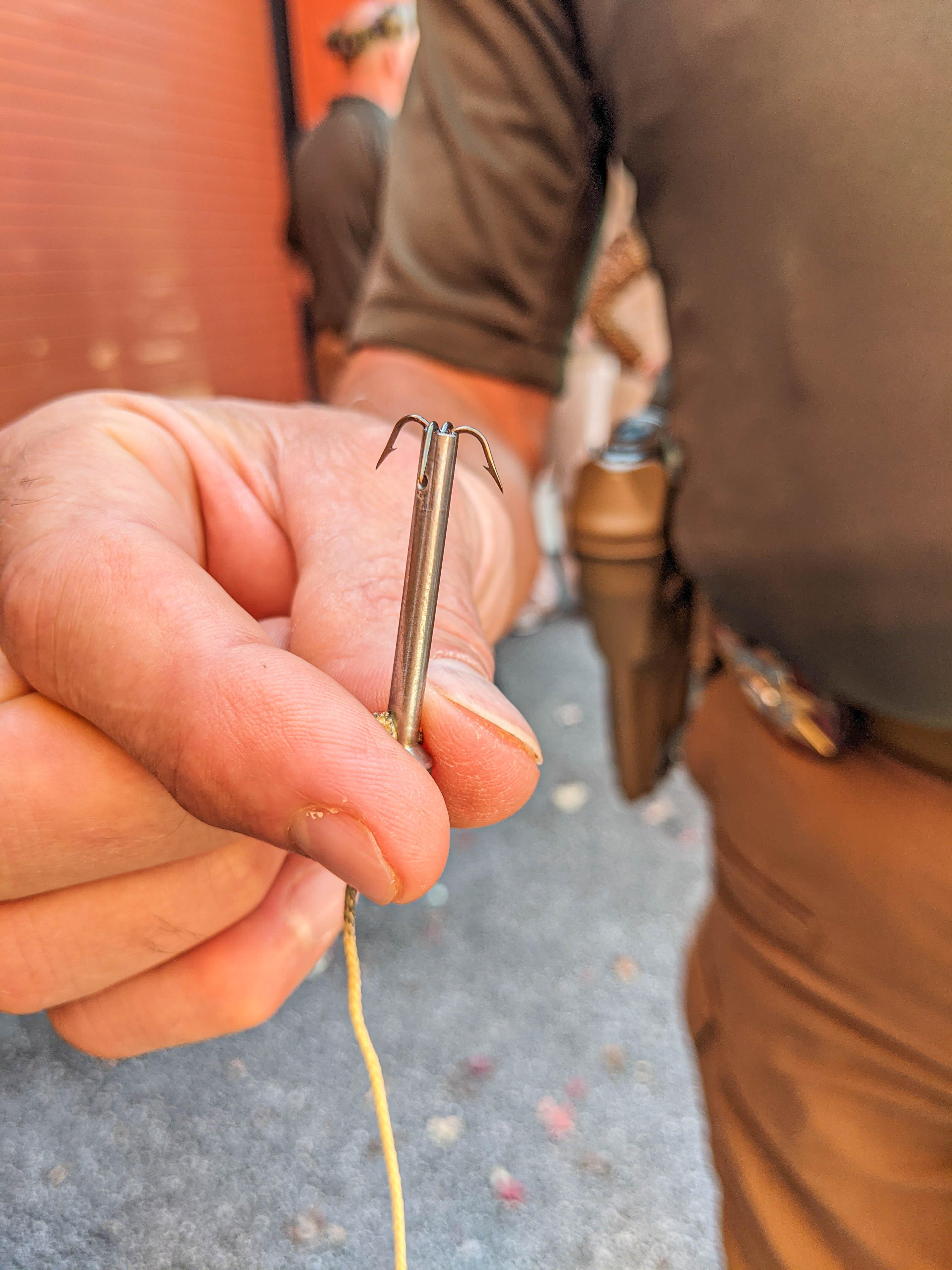 The weights at the end of the cord contain four barbed fishhooks –– designed to secure them to clothing. 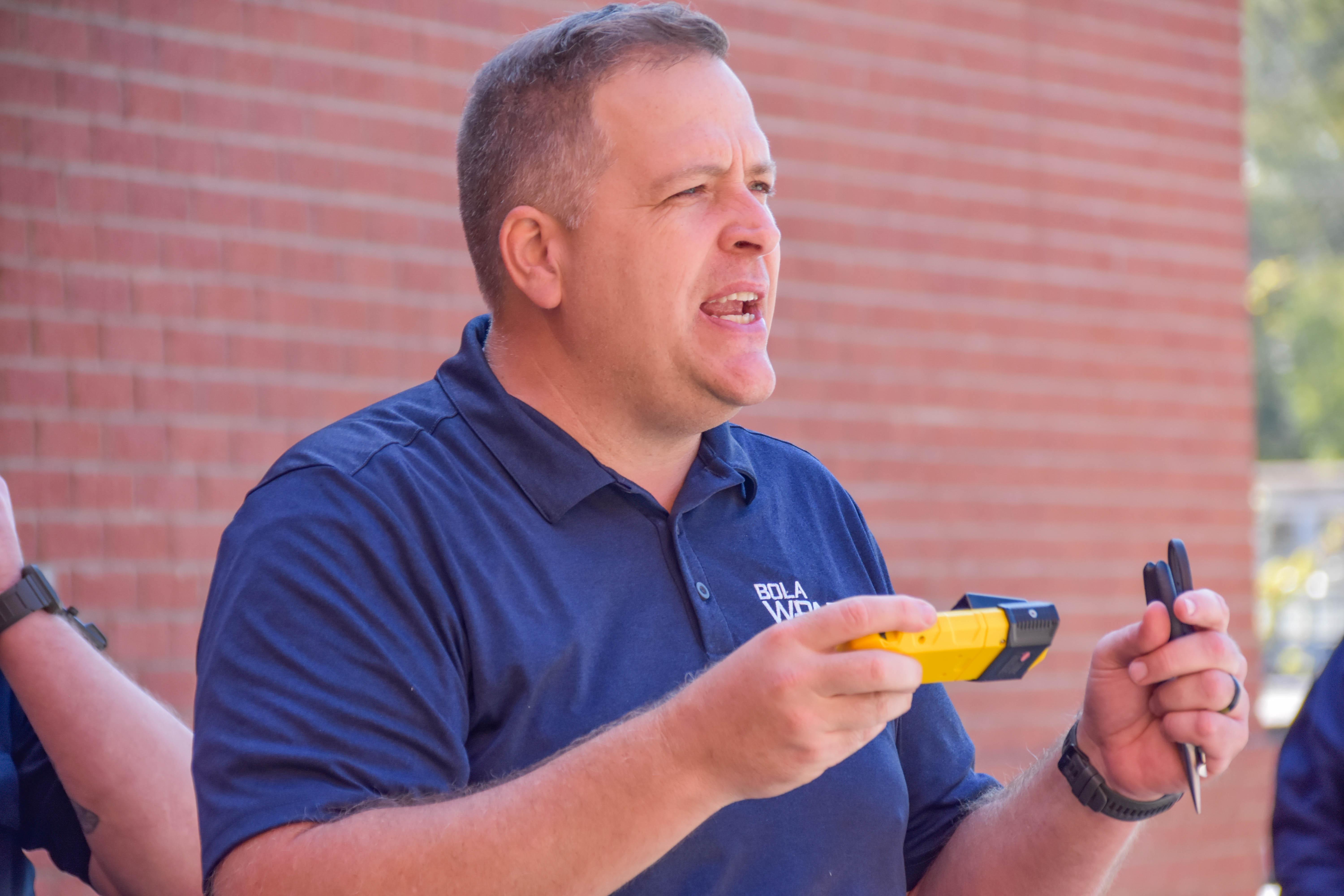 Wrap Technologies representative Kevin Johnson is a former police chief who specialized in “less lethal” training techniques. The product has only been around for a few years, but many agencies across the country are interested in the product, Johnson said. 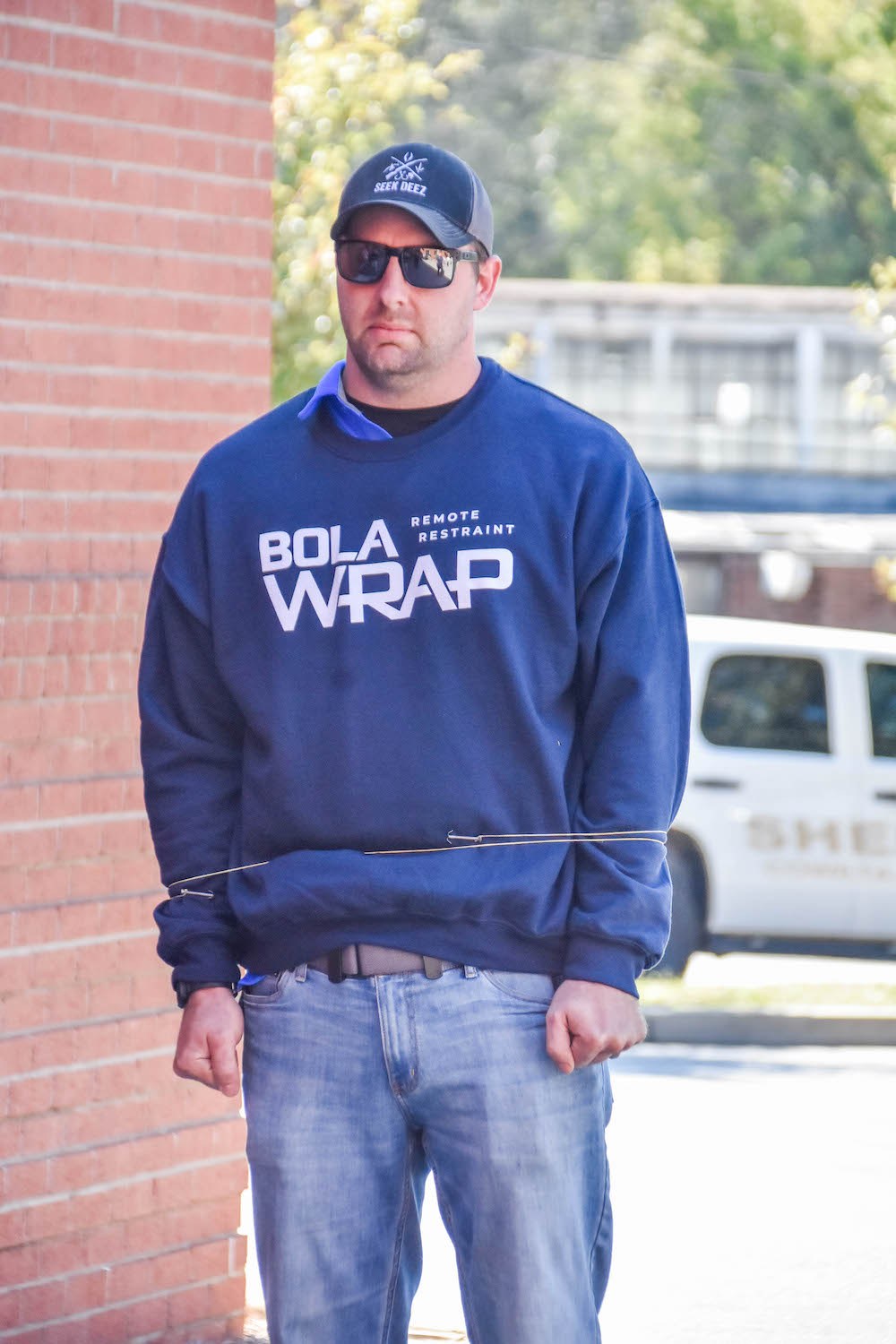 Newnan Officer Aaron Trusty gets lassoed by the BolaWrap during a demonstration held at the Newnan Police Department on Monday. 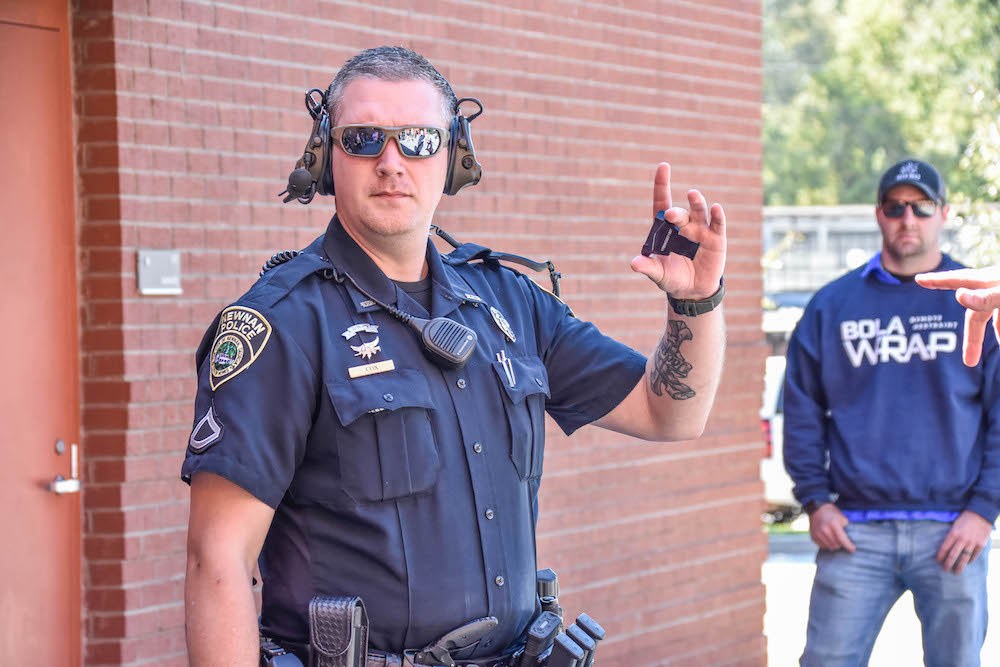 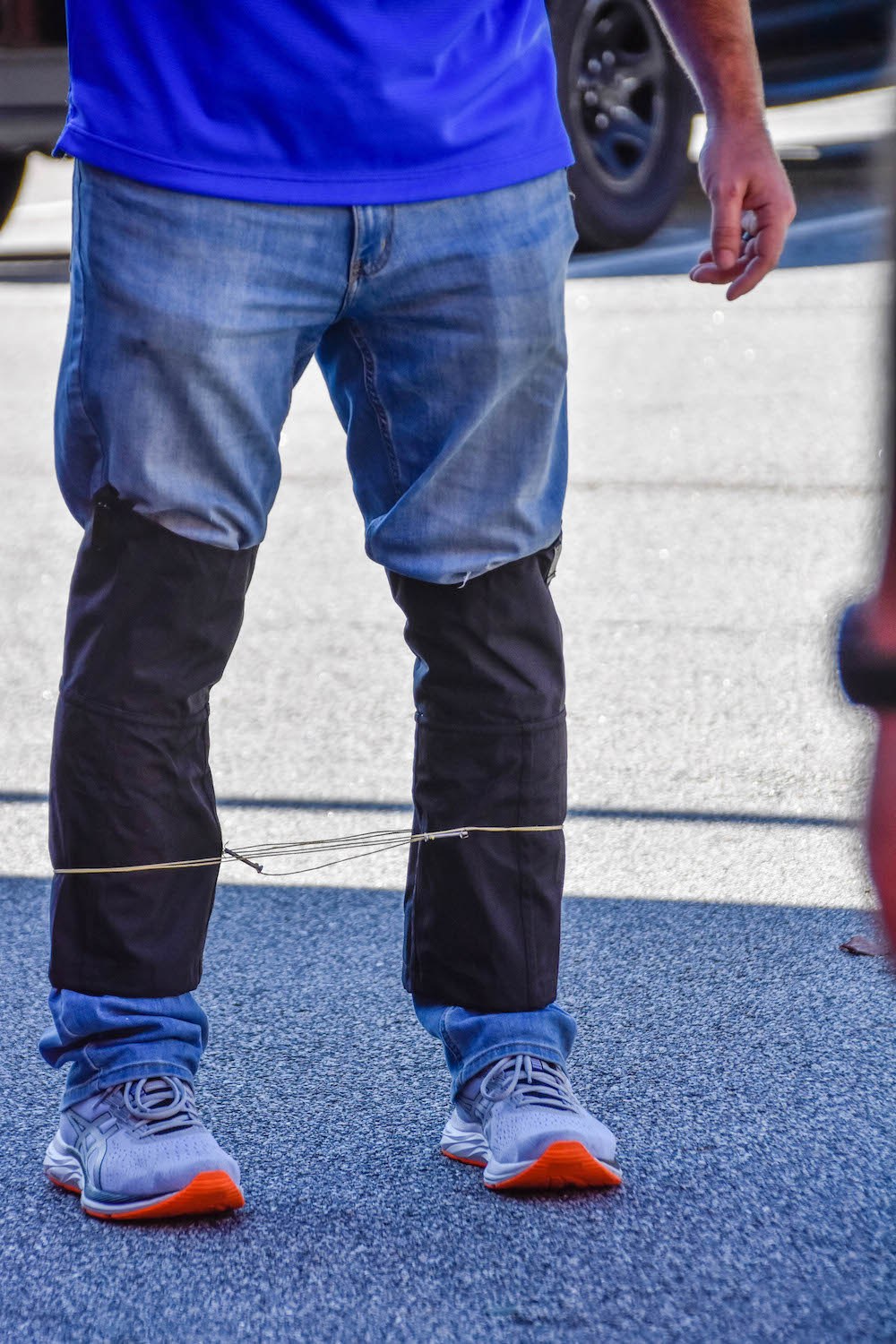 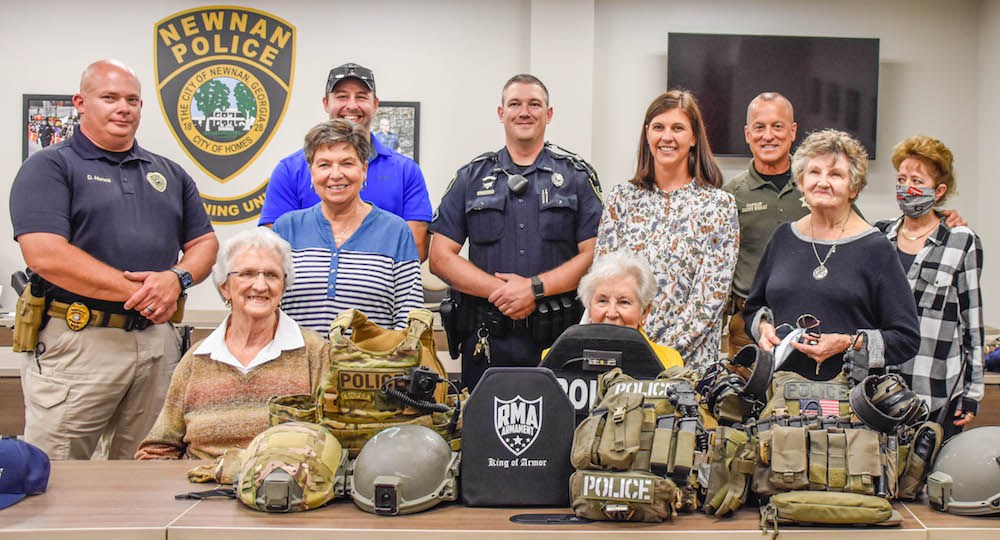 Eight of the 16 BolaWrap devices were donated by the Newnan-Coweta Public Service Foundation, a 501(c)(3) that helps supply local law enforcement with equipment often not found in their budget.