Fall sports in Coweta will look a little different this year as local high schools prepare to launch flag football programs for girls into the mix.

Spearheaded by the Atlanta Falcons and the Arthur M. Blank Foundation, the GHSA confirmed in December 2019 they were adding girls flag football after a successful pilot season, and Coweta will field three teams this year.

At Northgate, Coach Todd Herrington has taken the reins of the fledgling program and is working hard to develop plays, timing and basic fundamentals before their first scrimmage against East Coweta on Wednesday.

Over the course of his career, Herrington has worked as a position coach at Northgate and LaGrange where he helped develop receivers. But even with 20 years of football coaching experience under his belt, Herrington says flag football is proving to be a brain twist for him.

“In football, you focus on technique, but there’s not a lot of time for that here,” he said. “You work on teaching the basics, but 7-on-7 is nothing like regular football. It’s completely different, and I’m trying to make adjustments of my own.”

In flag football, the field is divided into four sections with markings at the 20, 40, 40, 20 and goal lines. First downs are every 20 yards, and the game is played on an 80-yard field. The width is also narrowed down to around 40 yards.

Each contest consists of four 12-minute quarters with a running clock except for the final two minutes, when it can be stopped for different situations.

There are no kickoffs, either to start the game or after scores, with the ball being placed at the 14-yard line.

Touchdowns are worth six points, and there is no kicking of extra points or field goals, although punting and punt returns are allowed. An extra point effort from the 1-yard line is worth one point, two from 10-yards out and three from the 20.

Along with Defensive Coordinator Lee McDermott and Offensive Coordinator Maggie Horne, Herrington said their primary focus is developing a love of the game with his team and ensuring they’re having fun while learning life lessons.

“You want to win, but when it boils down to it, we want to learn and have fun,” he said.

Learning a new sport isn’t the only challenge the team has faced this year. Between remote learning and social distancing, getting a new sport off the ground during the recent pandemic has proven to be a difficult assignment.

The school utilized social media to help get the message out, and for those who responded, a Google classroom was created to continue delivering information. Some have experience with flag football, but most do not, Herrington said.

"We have a group of 15 girls who are out there every day, but there are five volleyball girls and five softball girls who want to come out and give it a shot,” he said. "Once their season ends, we’ll let them come out, which will put us up to 25 girls. We’ve got to have depth with possible injuries and build for the future since we’ll be losing several seniors.”

A total of 155 schools will have a team this season, according to the GHSA. For their inaugural season, Northgate will be playing a 10-game schedule, which includes county rivals Newnan and East Coweta High Schools who will be fielding teams, too.

Because of field availability, all games will be held on Wednesdays and also will be doubleheaders. Their 10-game season opens with a matchup against Westlake.

Regions 6 and 7A schools are in one division, while regions 1 through 5 are in another. Northgate will play in the higher division because that's where GHSA put them for distance purposes, according to Herrington.

“We’re not in regions and don’t have the same schedule as other established sports,” he said. “Our area includes us, Newnan, East Coweta, Westlake and Douglas County. During our bye week, we may pick up another non-area game if we can."

The season concludes Dec. 10 with the state championship game at Georgia State University in Atlanta.

Financially, Herrington said the team will take advantage of a $7,000 contribution from the Atlanta Falcons for schools starting flag football.

"That got us off the ground and allowed us to buy uniforms, and equipment like footballs, flags, cones and mouthpieces,” he said. “We’re very grateful for the foundation to give us the opportunity.”

This story will appear in this weekend's edition of The Newnan Times-Herald. 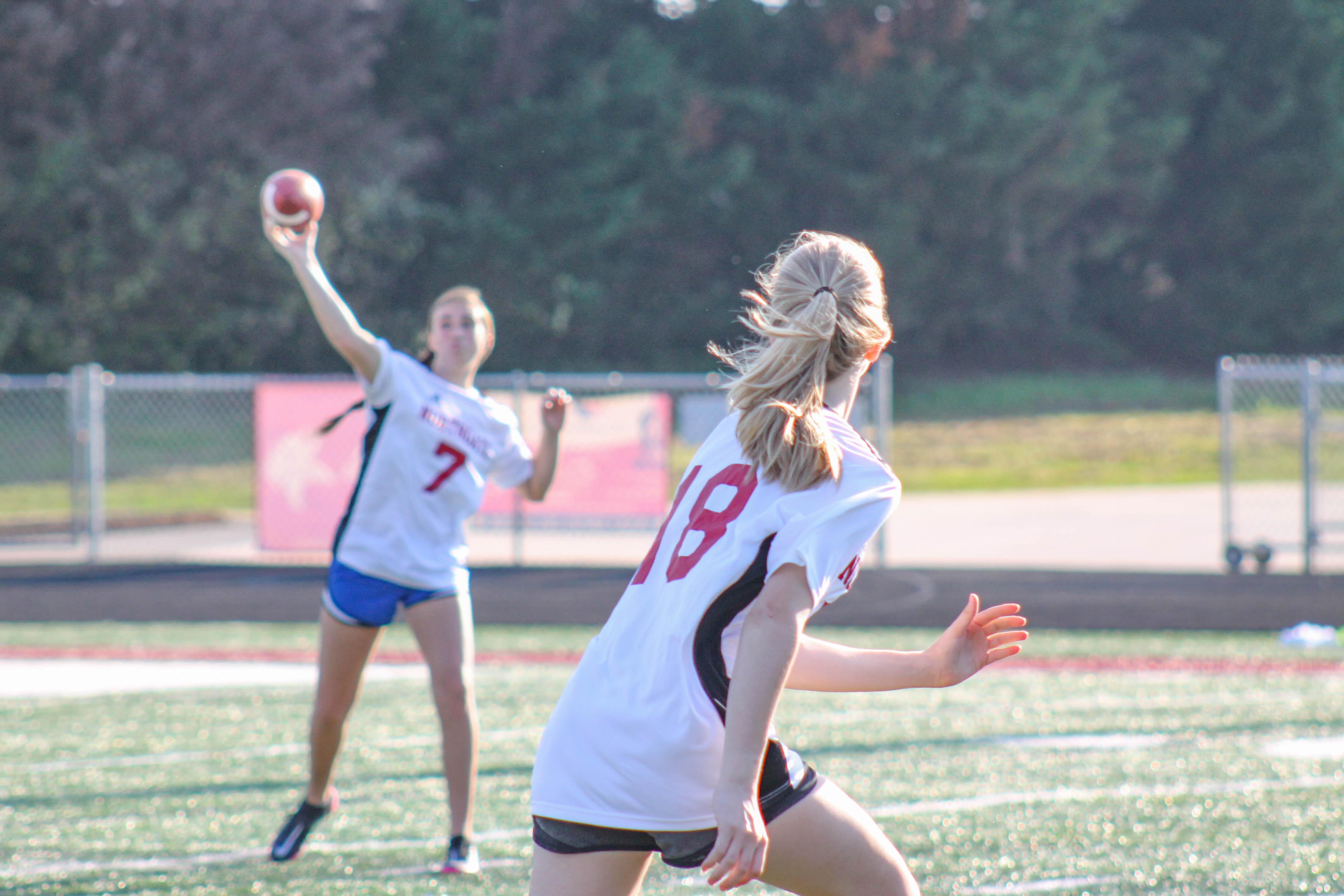 Josey Smith prepares to receive a pass from Caitlin Raynor. 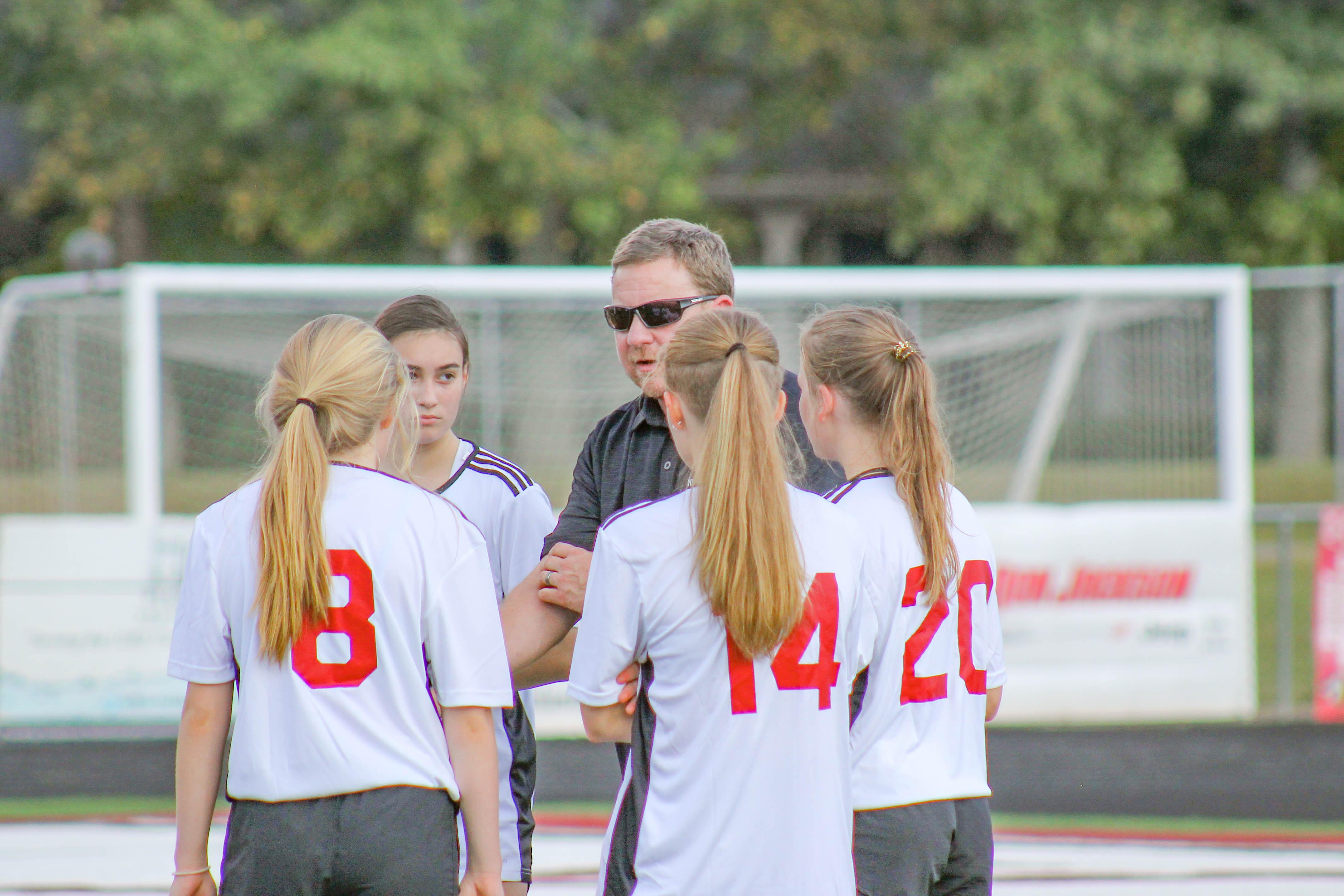 Coach Todd Herrington speaks with players during their recent practice. The team is preparing for their first scrimmage next week against East Coweta. 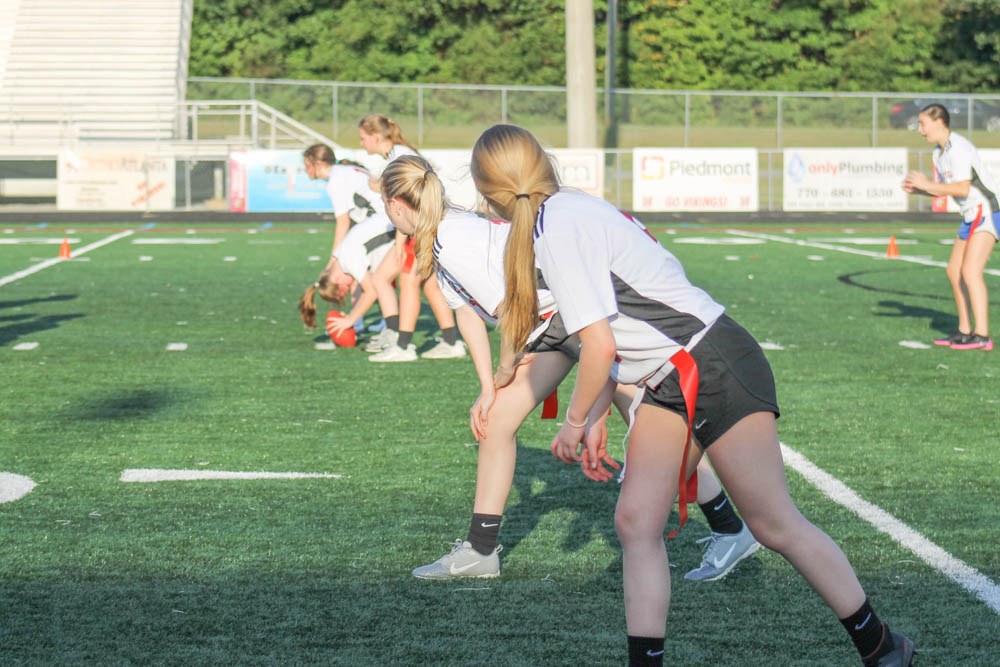 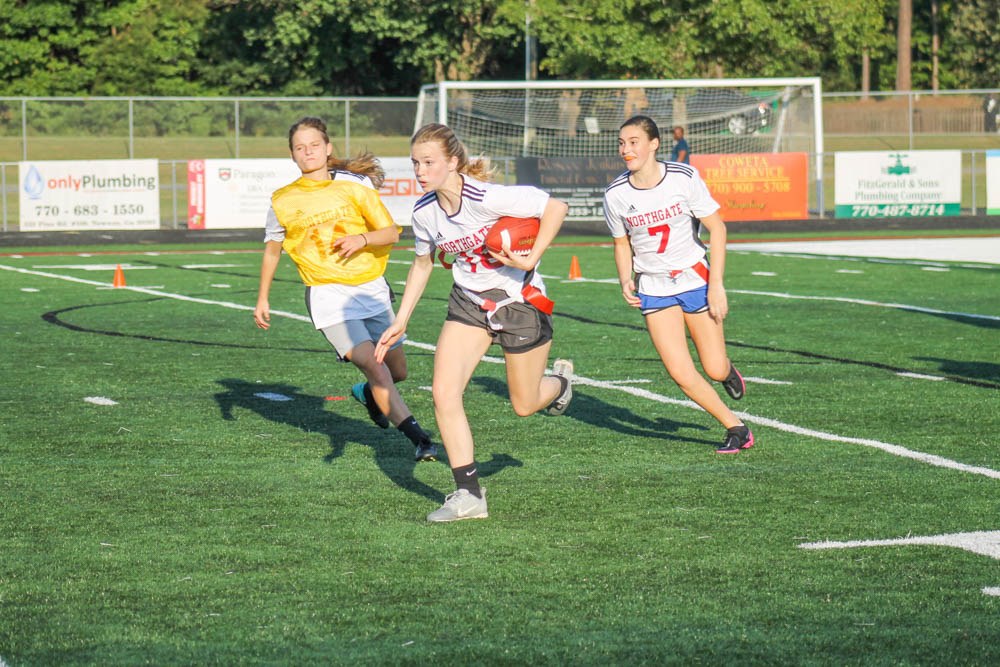 Raven Carroll, Josey Smith and Caitlin Raynor run a play during their recent practice at Northgate. 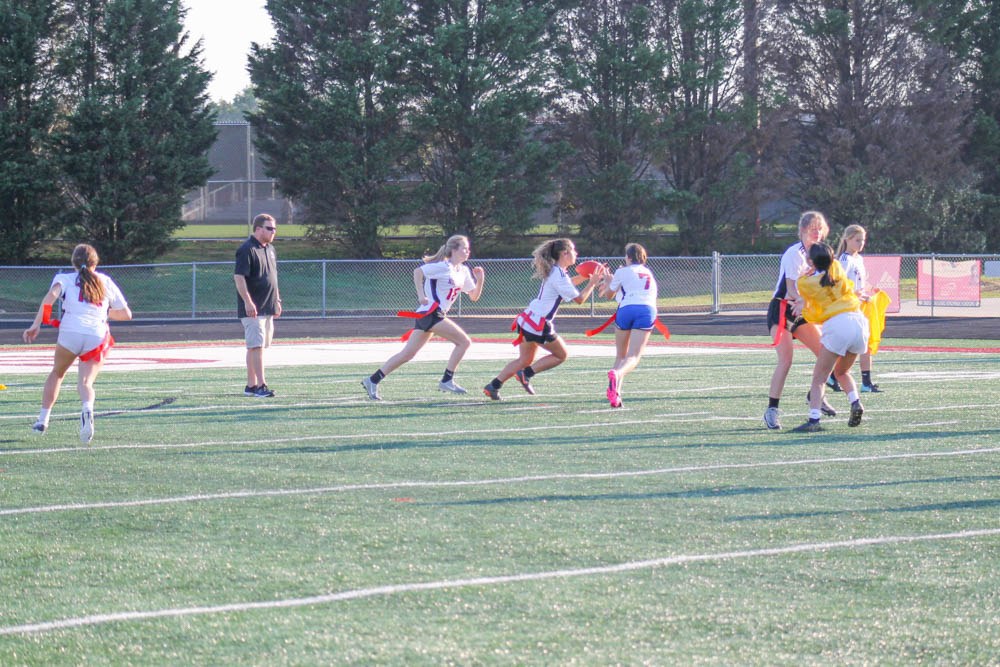 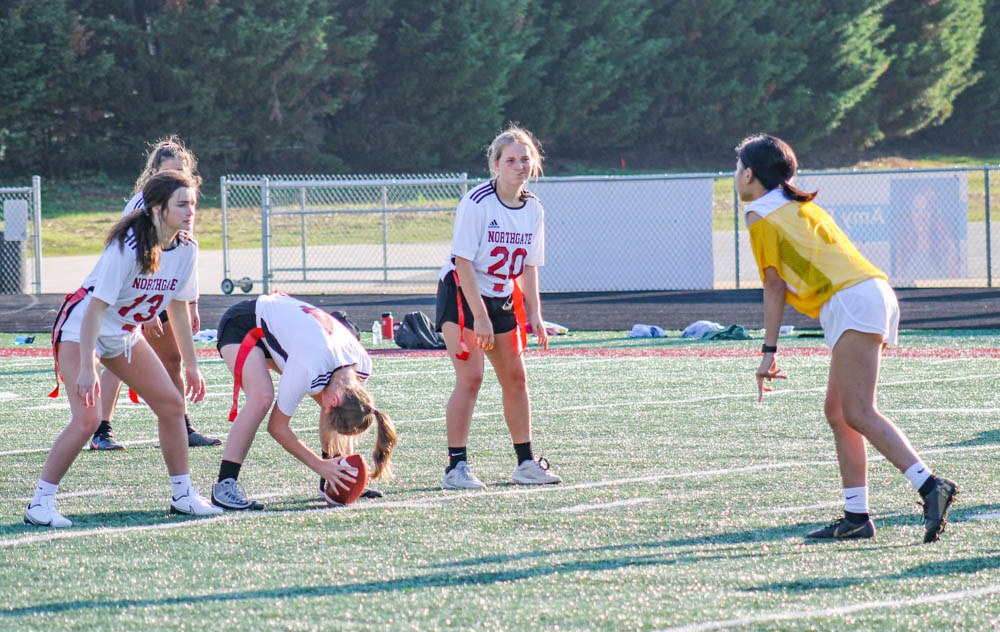 Game Faces: Leigha Lowe, Kayla Hall and Ellie Hall line up for a play during their recent practice at Northgate. 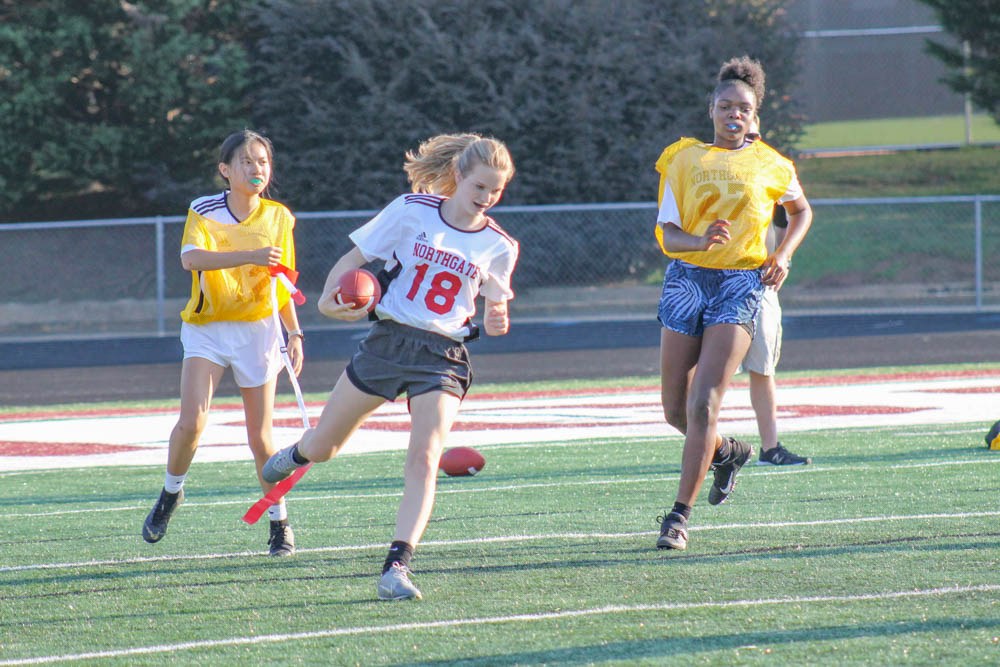 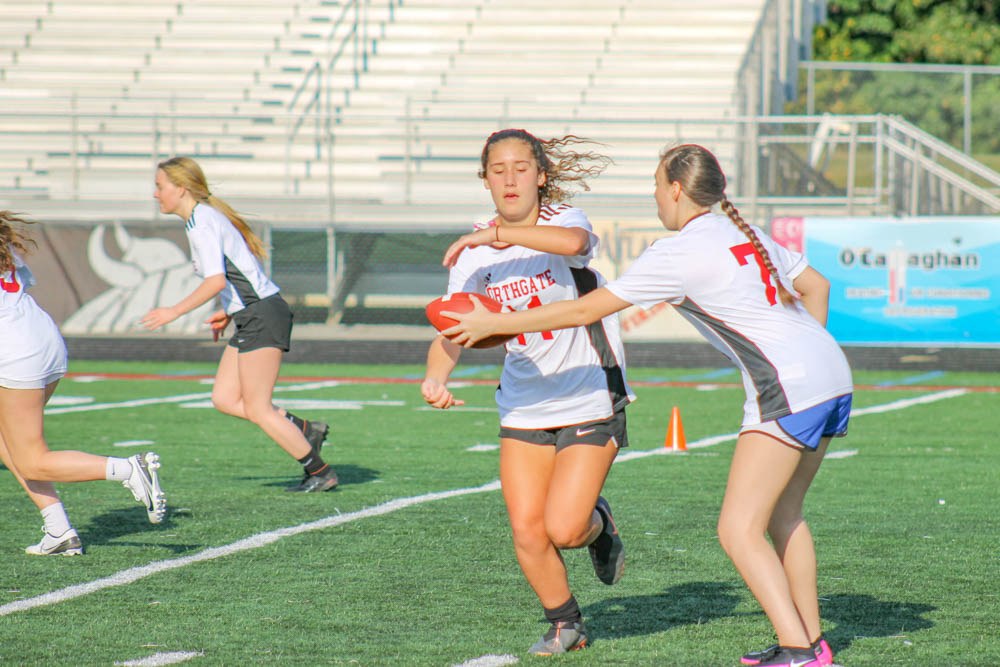 Caitlin Raynor hands the ball off to McKinley High. 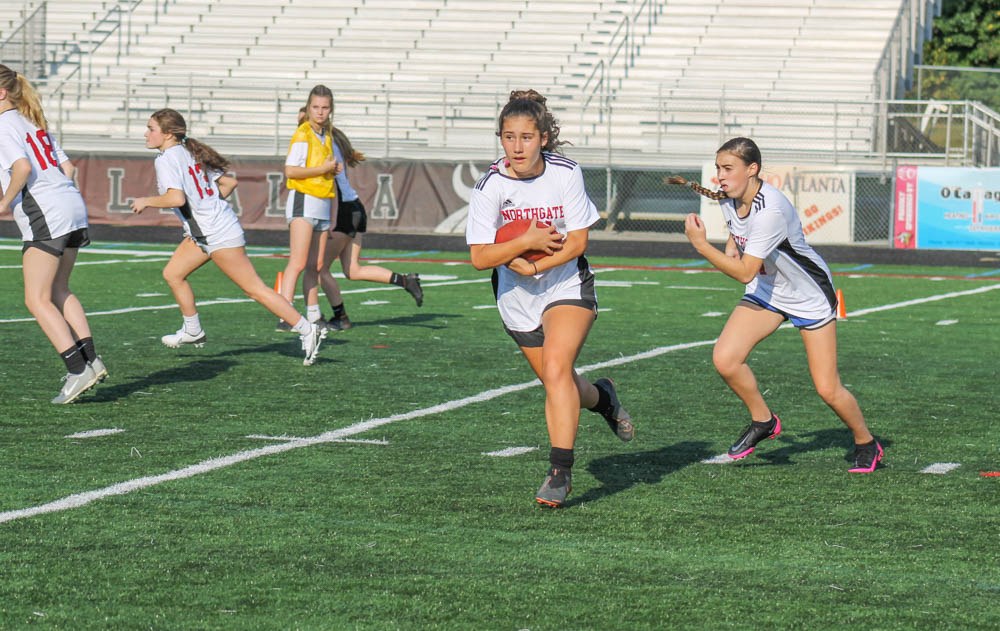 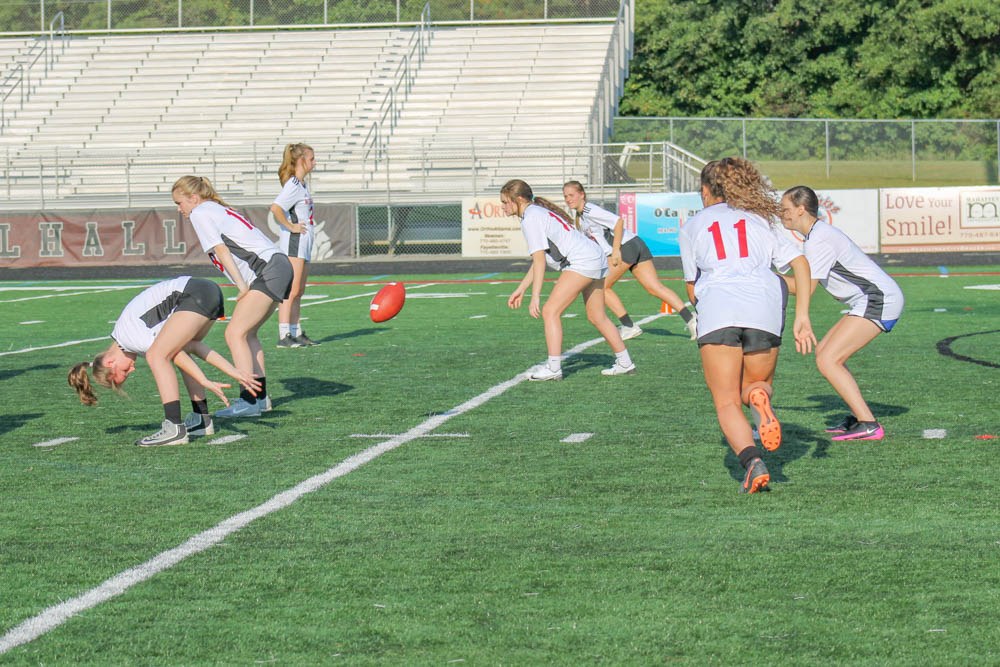 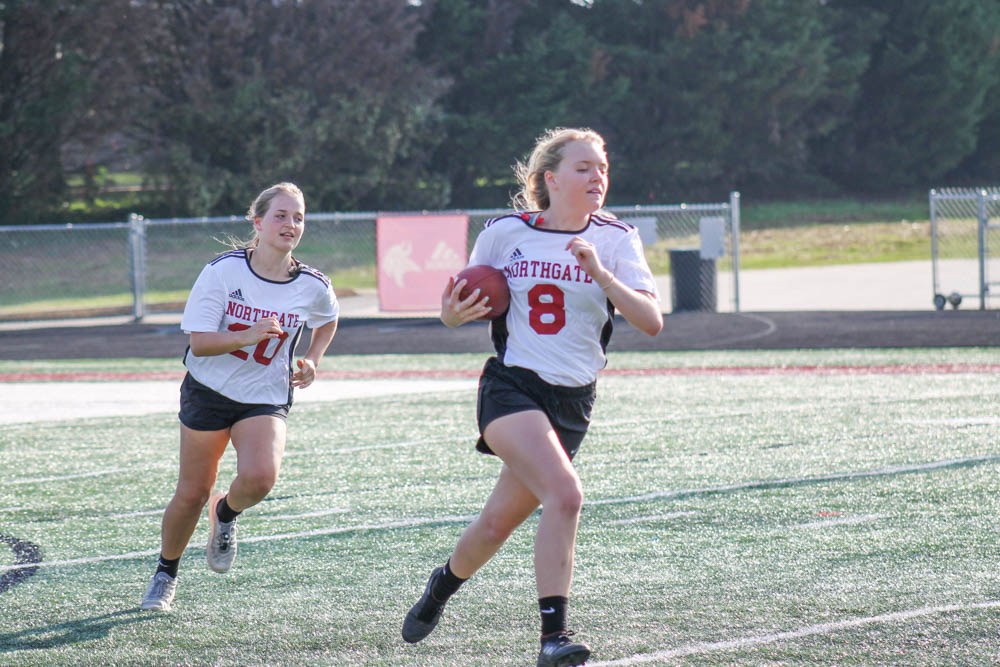 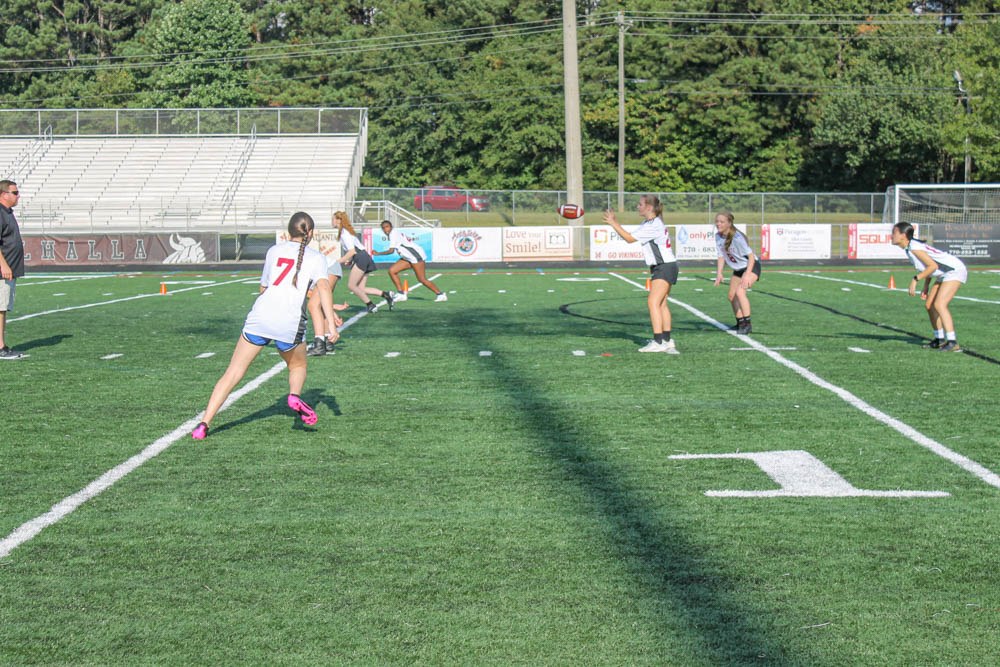 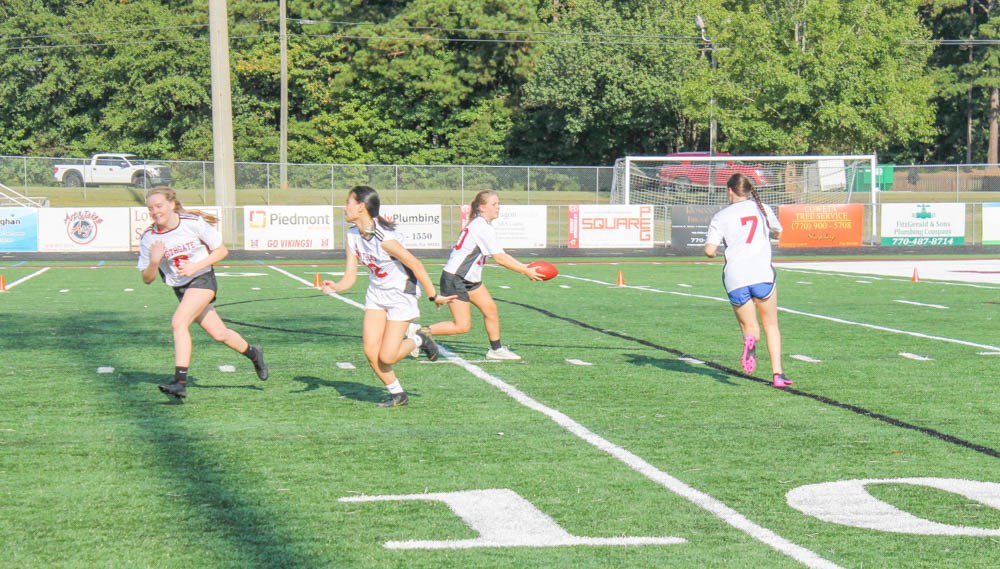