Brandon Overton of Evans made his move on lap 16 to sneak past Florida’s Joseph Joiner and then sped away to win the 23rd Annual Michael Head, Jr. Memorial race at Senoia Raceway on Saturday night.


Overton has been one of the hottest dirt late model drivers in the nation winning his twentieth race of the season pocketing the top prize of $4,054 and one of the most unique trophies in motorsports. The winner’s trophy is a replica pedal car honoring the late Michael Head, Jr.

“I saw the trophy online earlier in the week,” said Overton in victory lane. “I told my guys we were going to Senoia Raceway to win that trophy.”

Joiner was poised to win his first at the tricky Senoia Raceway. He bolted to several early leads that evaporated each time the race was slowed for cautions. Several accidents took its toll on the stellar field including an early crash that left Tennessee’s Todd Morrow upside down. Morrow’s misfortune also collected race favorite Michael Page of Winston.

A slight mistake on lap 16 allowed Overton to shoot past Joiner. He would lead the rest of the way maneuvering lapped traffic and finding ways to avoid holes in the track that had developed due to the excessive amount of moisture dumped on the facility over the past couple of weeks.

“We had to figure out where we could put the car and try and stay ahead of Joseph,” added Overton. “He gave us one chance and I had to go.”

Joiner challenged Overton on several occasions and even passed him on lap 41, but a caution gave the lead back to Overton due to the rule of returning to the last completed lap for the restart.

Overton had clear sailing the final thirteen circuits and won by nearly two and half second over Joiner. Whitesburg’s Austin Horton was third with Alabama’s Sam Seawright fourth and ‘Cat Daddy’ Clint Smith of Senoia in fifth. Smith started twenty-first and was the race’s hard charger improving sixteen positions.

The Super Late Models will return to Senoia Raceway on October 22, 23 and 24 for the track’s annual Showdown at Senoia. Drivers will compete for $10,000 to win in the Billy Clanton Classic which will culminate the race weekend.

Forsyth’s Jamie Maurice was the man on the move as the former track champion moved past Tanner Collins of Franklin and Whitesburg’s Austin Horton to gain third. Maurice then clipped the inside wall on lap 18 and tore off half of his nose piece. He would retire from the race a couple laps later ending a strong night.

Knowles would be tested at the end by LaGrange’s Jake Traylor who made a late race charge, but would hold off all advances to win his ninth of the season and 50th career race at Senoia Raceway. His win places him third overall in career wins since 2010 when the track returned to a dirt surface. Only Clint Smith (64) and Clifton Moran (56) have more wins in that span of racing.

Monroe’s thirteen-year-old Trae Kirk split the first and second place cars at the beginning of the Late Model Sportsman race to steal the lead. Locust Grove’s Morgan Alexander battled back a few laps later and saw an opening down low in turn two.

Kirk and Alexander touched with Kirk losing control and shooting up the track towards the back stretch concrete wall. Just as Kirk slammed into the wall Alabama’s Ryan King was on the gas pedal and he slammed into Kirk’s car before also collecting the concrete. Both cars received too much damage to continue.

Alexander went on to record the win with Alabama’s Braxtin Barber moving up through the field to gain the runner-up spot. Barber looked like he may have had an opportunity to overtake Alexander down the front stretch on the final lap, but Barber’s car did not stick down low and Alexander powered away on the high side.

Last year, Locust Grove’s Cody Lively waited until the final race of the season to win his first Mini Stock race. He duplicated that feat on Saturday night winning his first Charger division race on the final night of the regular season.

The second year driver moved into a Sportsman car this year and has competed in the Chargers class to gain experience with the faster race cars. Lively led flag to flag, beating Alabama’s Tony Yawn and Temple’s Andrew Moody for the laurels.

Gray’s Chaz Haskins won the Bomber feature while Whitesburg’s James Swanger was victorious in the Hobby race. Loganville’s Dan Bennett claimed the checkers for the Mini Stock and Michael Goins was the Hot Shot feature winner.

The Hot Shots ended the night with a flare as Griffin’s Cory Greene was caught up with a lapped car coming out of the final turn and actually rolled his car across the finish line in third place.

Senoia Raceway will return to stock car racing one more time this year hosting the 5th Annual Showdown at Senoia on October 22, 23 and 24. The three night celebration of speed will be highlighted with nine divisions of racing, post race parties, camping and more.

The Schaeffer’s Oil Fall Nationals will swing through town with their Super Late Model tour competing for the $10,000 to win race on Saturday, October 23rd. The Red Clay Series and the Southern Outlaw Hobby Series will also compete at the Showdown at Senoia.

“This will be the biggest racing weekend we have ever promoted,” said track promoter Mayes Massey. “It will be the largest purse, the most series competing and the most divisions we have ever scheduled for the year end race weekend. We hope the crowds come out to see all the action.”

For more information on the Showdown at Senoia weekend, visit the track website at www.senoiaraceway.com. Information is also available on the track’s Facebook page, their Twitter feed and Instagram shares. You can also call the speedway at 770.599.6161. 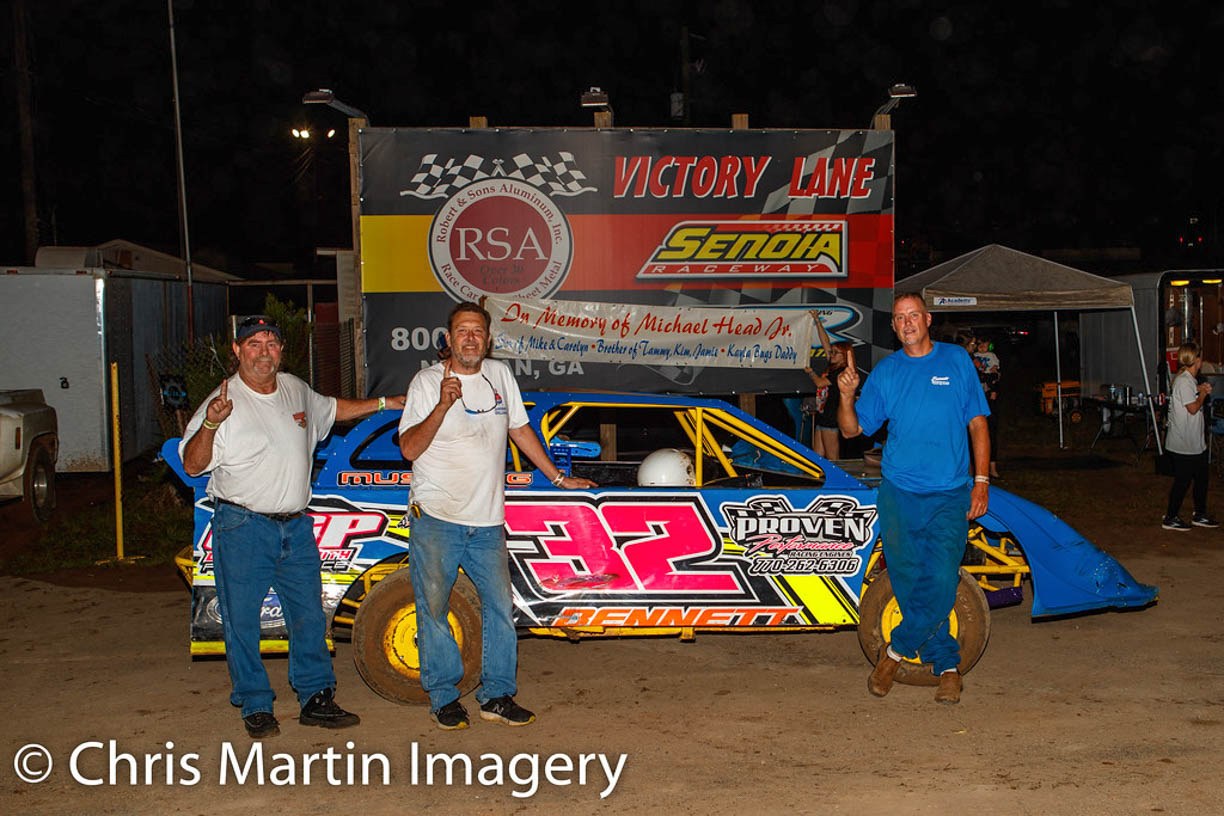 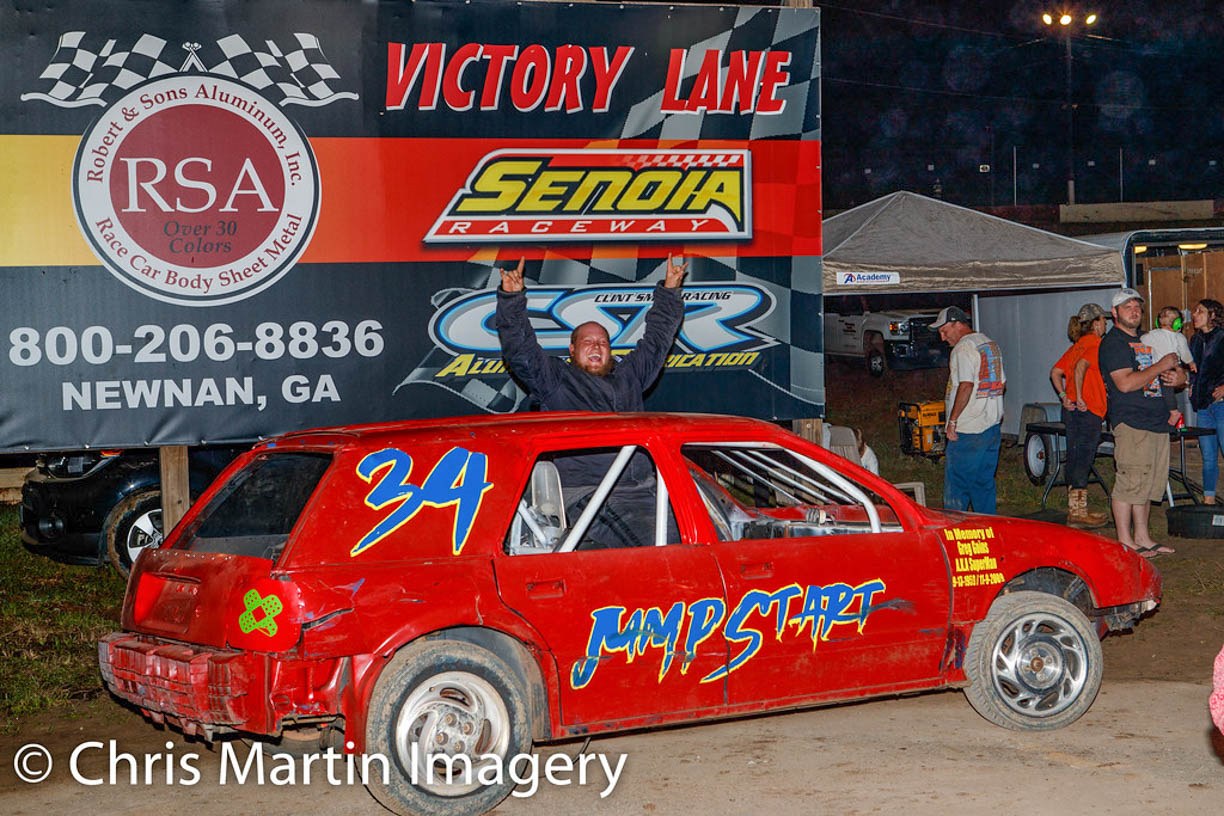 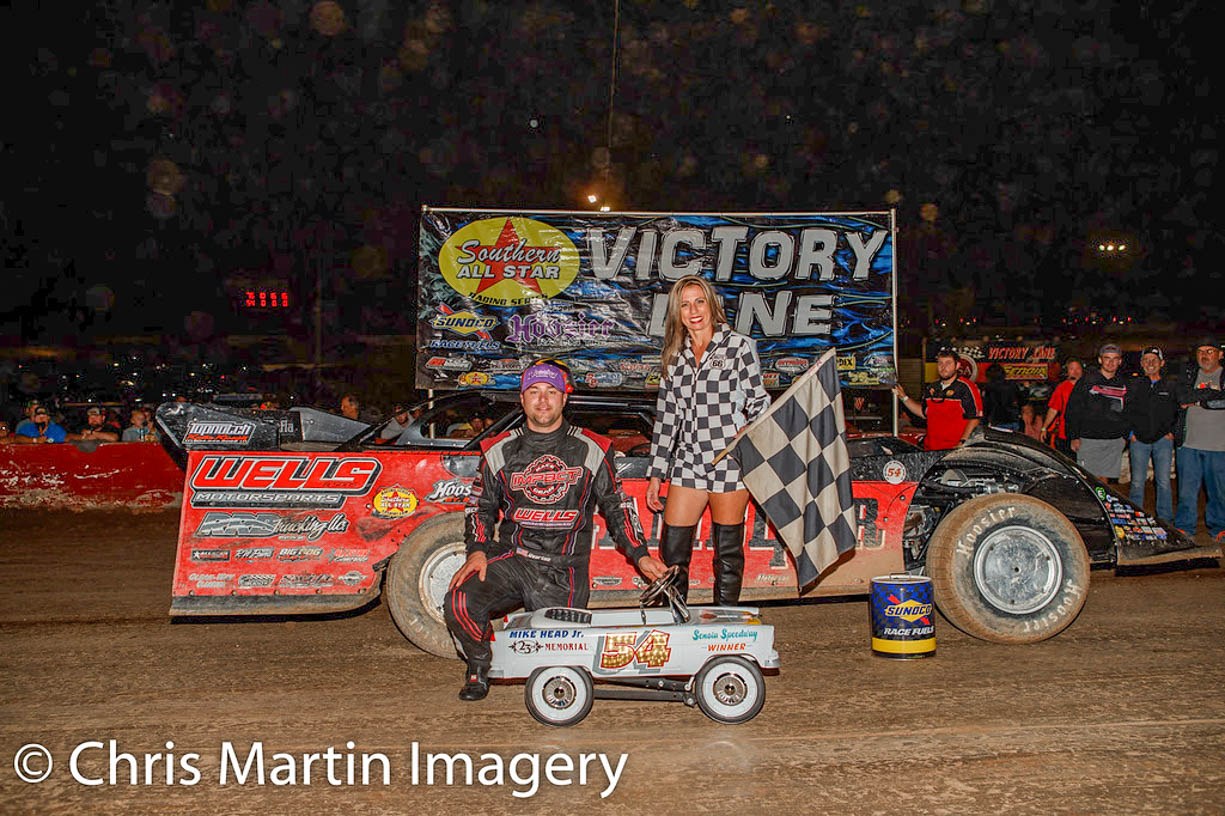 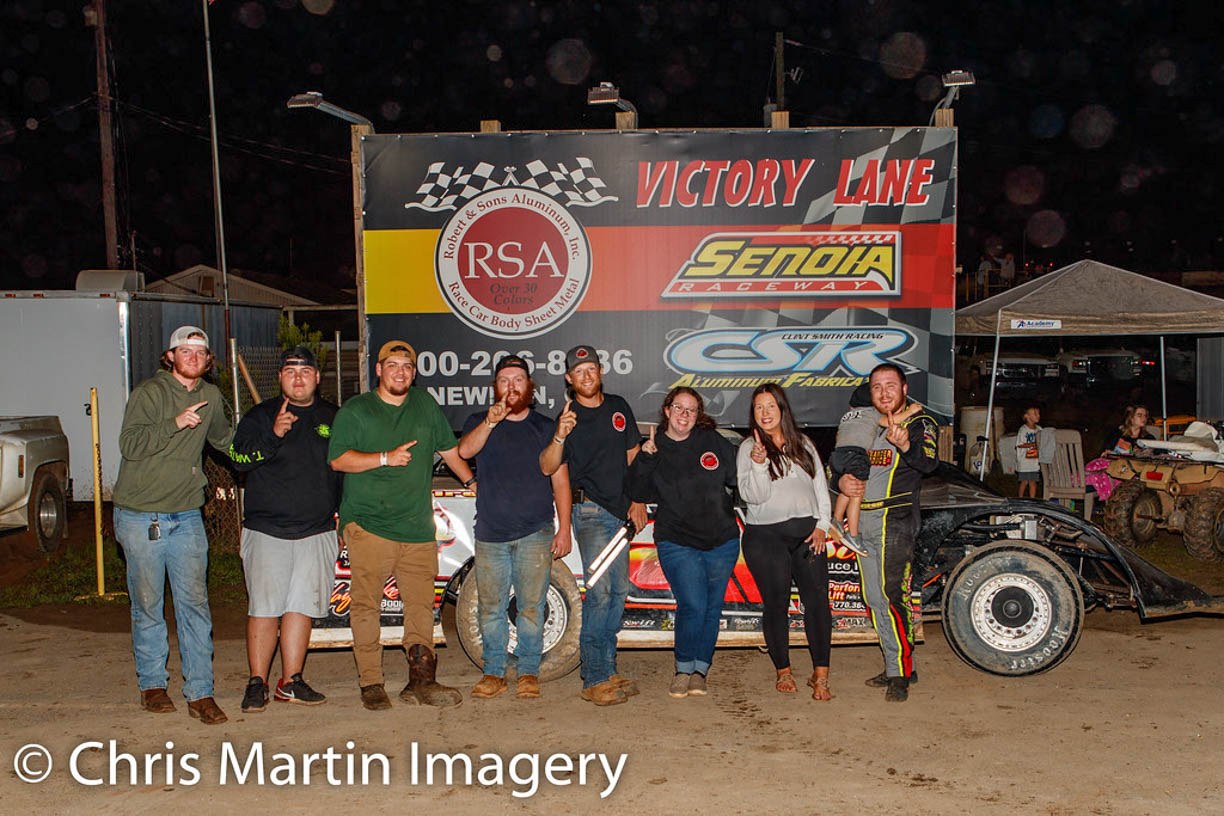 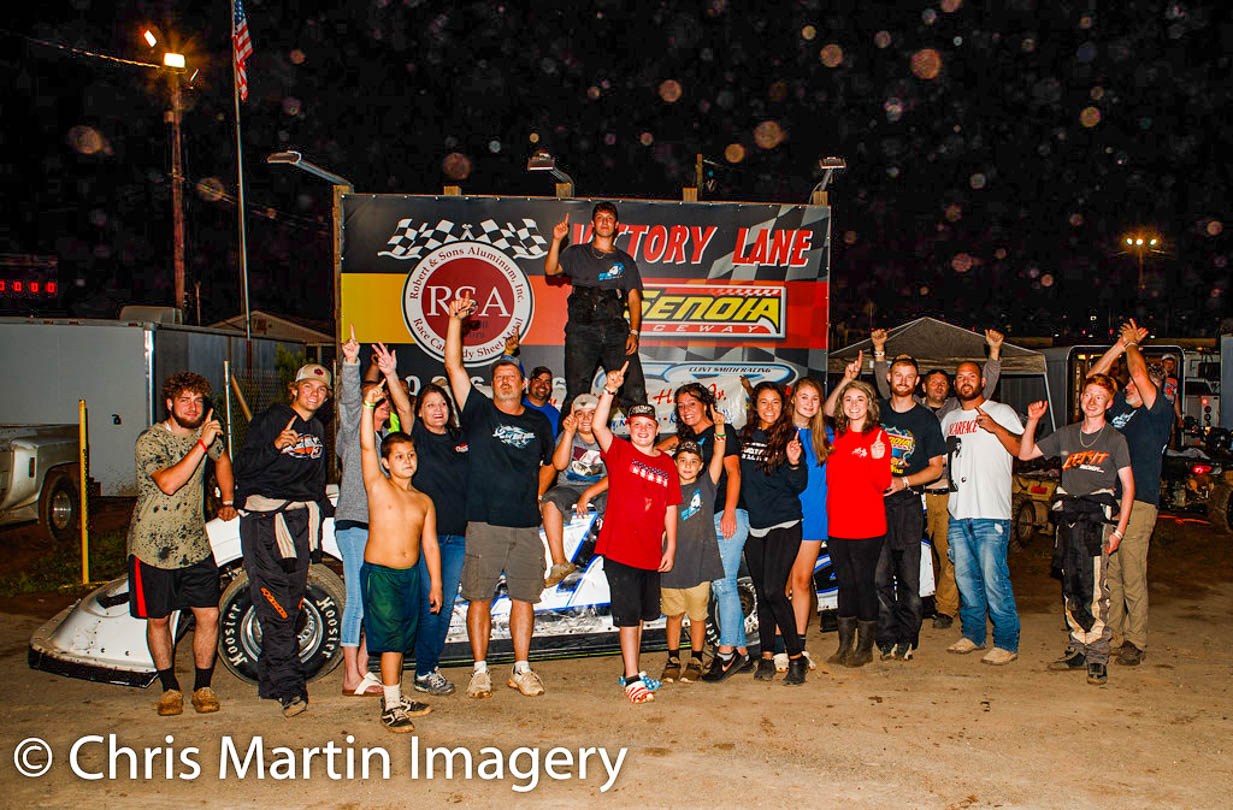 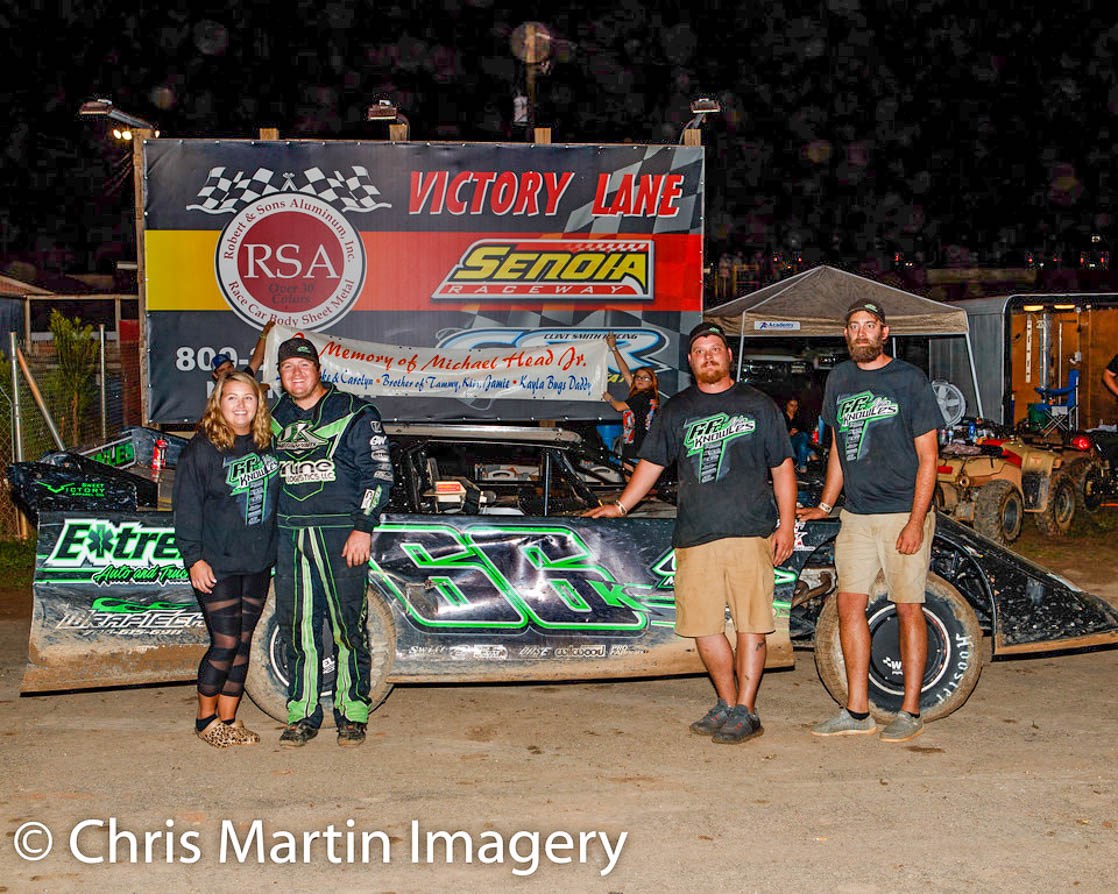