Coweta-Fayette Football Classic on the horizon

SENIOA – There was a storm cloud in sight Saturday night at Senoia Raceway, but a Hale storm occurred with LaGrange’s Dennis Hale dominating the entire night in the Limited Late Model division.


Hale clocked in as one the fastest during preliminary qualifying and then led flag to flag to capture his first win of the season.

Others moving to the forefront of the special three event series winning the first round features included Cartersville’s Rodney Martin in the Crate Late Models, Chatsworth’s Booger Brooks in the Late Model Sportsman, Newnan’s Olivia J. Gentry in the Chargers, Chris Steele of Franklin in the Hobby, Senoia’s Dustin Smith in the Bomber and David Brackett of Temple in the Mini Stock.

Forsyth’s Tommy Smith was awarded the win in the Hot Shots after the apparent race winner was disqualified in technical inspection.

The four-time track champion, Smith, could not catch Hale though as he finished nearly five seconds ahead of the charging Smith.

In the Crate Late Model feature it looked as though Alabama’s Dylan Knowles would cruise to another Senoia Raceway victory. Similar to Smith, Knowles is one of the track’s winningest drivers, capturing 44 feature wins since the track returned to dirt in 2010. Knowles led the race until a crazy situation developed on lap 19.

Knowles slowed after overtaking Jimmy Thomas on the backstretch. Thomas had slowed and exited the track in front of Knowles. As Knowles slowed for no apparent reason, others running among the top positions also slowed. Jody Knowles of Tyrone and Tanner Collins of Franklin just moved around the slowing cars before a caution was called because of the dangerous situation that unfolded with cars slowing for no reason.

“That was something I have never seen before in all my years of officiating,” said race director Chad Harrington. “I thought he broke or something, but then everyone else started to slow down, too. I had to call for the yellow before somebody got slammed by one of the drivers that were not slowing down.”

After a lengthy discussion by officials, the cars were lined up as they were running when Harrington called the caution to begin. This placed Jody Knowles in the lead, Tanner Collins in second followed by a few others that did not slow down. That lineup placed Dylan Knowles on the restart in fifth, which he protested greatly to officials.

When the race did restart, Jody Knowles took command, with Collins trying to overtake. Rodney Martin also found his car was its fastest on the high side of the race track. He used that groove to track down Collins before making a last-lap pass of Jody Knowles on the final lap. It was Martin’s first trip to Senoia Raceway and his first career win at the 3/8ths mile gumbo clay track. Jody Knowles hung for second with Collins finishing a solid third.

Action in the Late Model Sportsman main event was highlighted by an intense battle for the lead between a pair of drivers from North Georgia. Colten Jackson and Booger Brooks, both from Chatsworth, were driving each other hard until a lap six restart saw Jackson push it a little too hard in turn two and spin in front of the field. Brooks and most of the others were able to avoid Jackson.

Brooks took from this point and never looked back, posting the win over Evans’ Cody Overton, Byron’s Wiley McDaniel, Chris Hough of Calhoun and Ringgold’s Sawyer Tinker. Hough and Tinker had never raced at Senoia Raceway before Saturday night and managed top-five finishes on the unique slick surface.

Former Mini Stock champion, Mark ‘Mad Dog’ Newton of Hampton, made his season debut and captured the pole with the fastest lap in qualifying. That did not equate to success on the track, as Newton got together with Loganville’s Dan Bennett in the early laps of the feature resulting in both spinning. Another former class champion, Newnan’s Tommy Faulkner, then slammed into Newton’s car, ending the night for both of the former champions.

Temple’s David Brackett inherited the lead and then cruised to his second straight win for the four-cylinder racing class. Justin Brackett finished second ahead of Stephen Chunn in third.

The pit gates will open on Saturday, June 20, at 4 pm, with the grandstand opening for spectators at 5 pm. The drivers meeting is set for 5:30 pm with hot laps and qualifying starting at 6 pm. Opening ceremonies and the first feature race is scheduled for 7:30 pm. 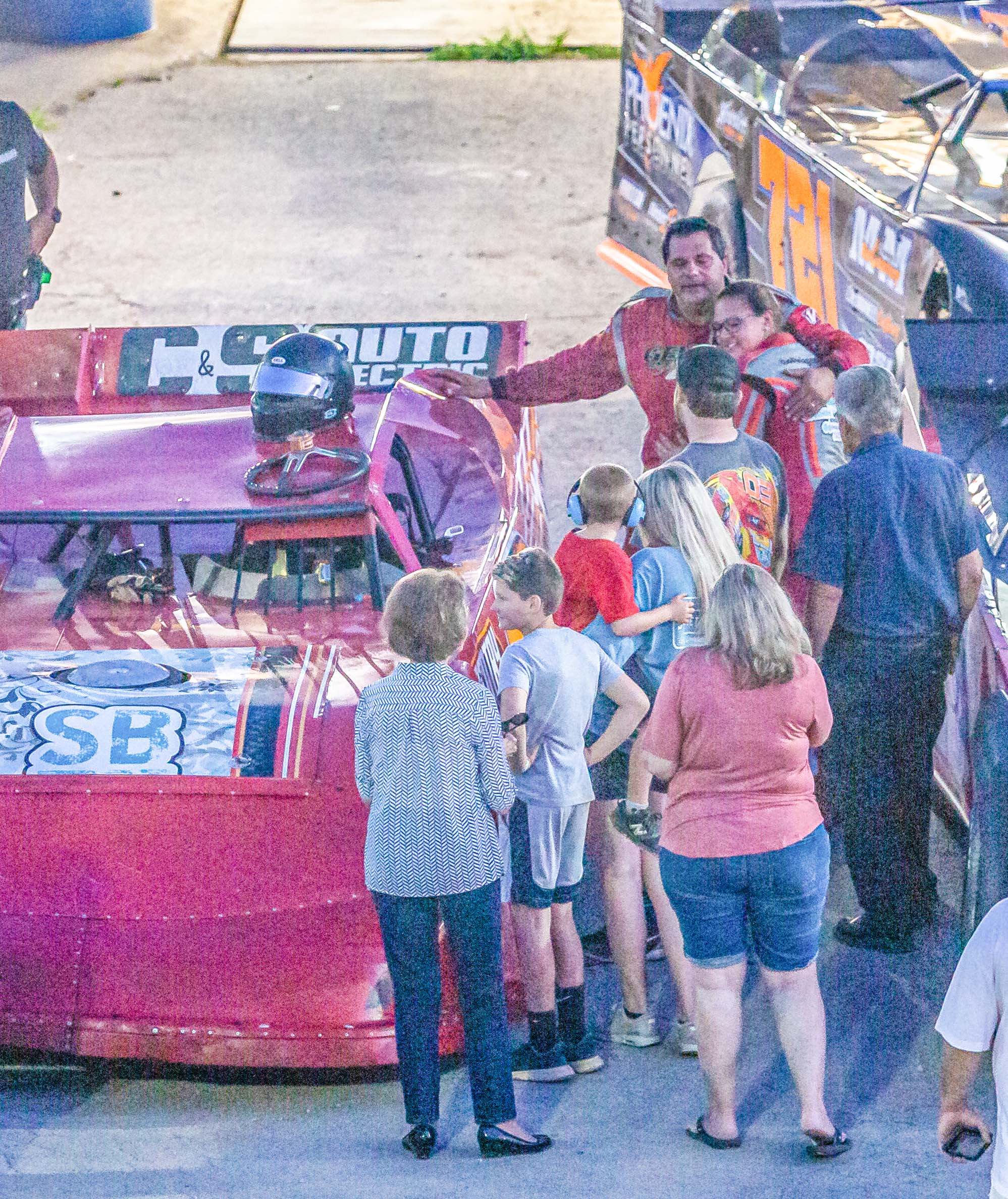 Olivia Gentry hugs her father, Oliver, before he takes the track for his race. Olivia took first place in the Chargers feature Saturday night, while Oliver placed third in the Limited Late Models feature. 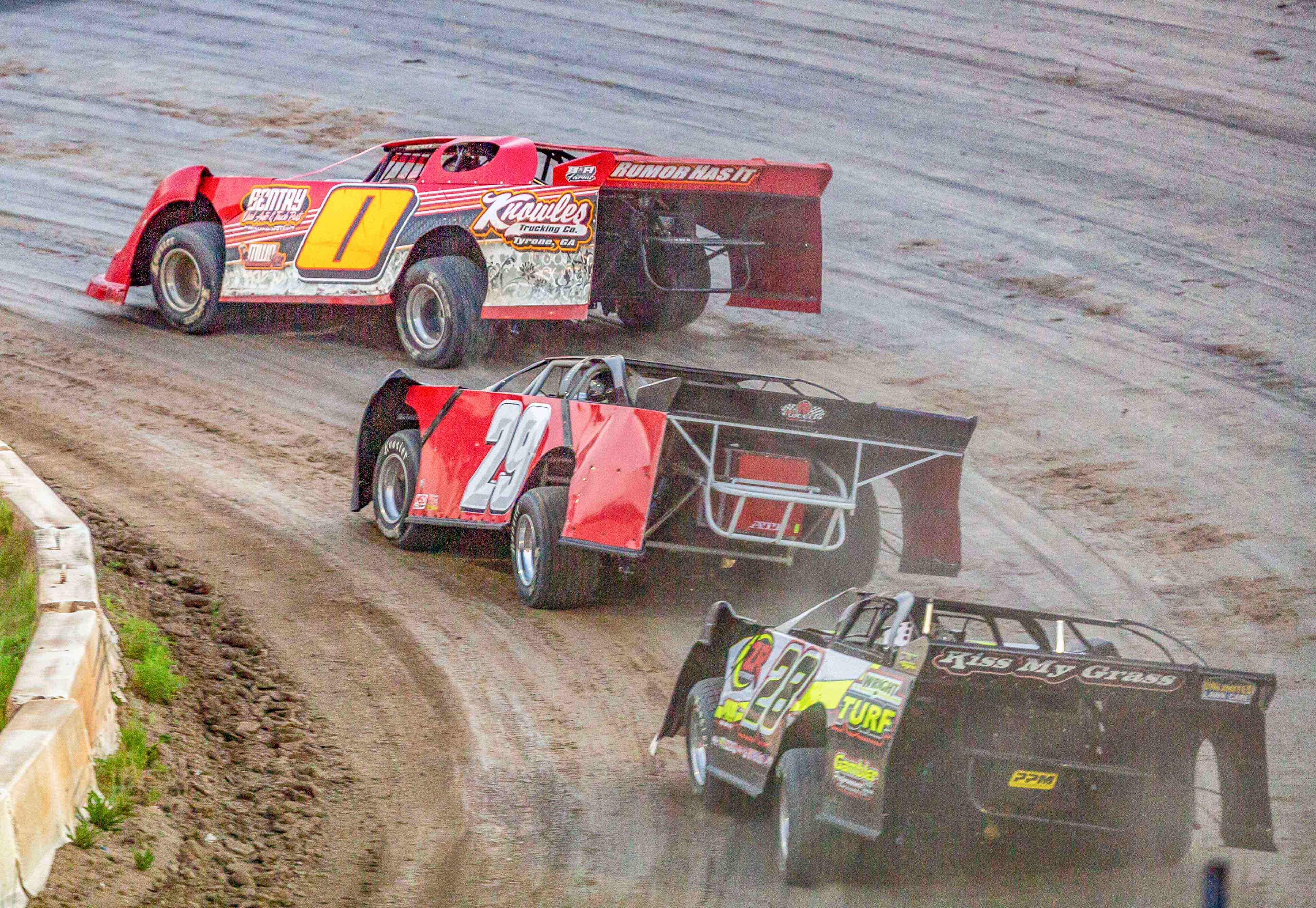 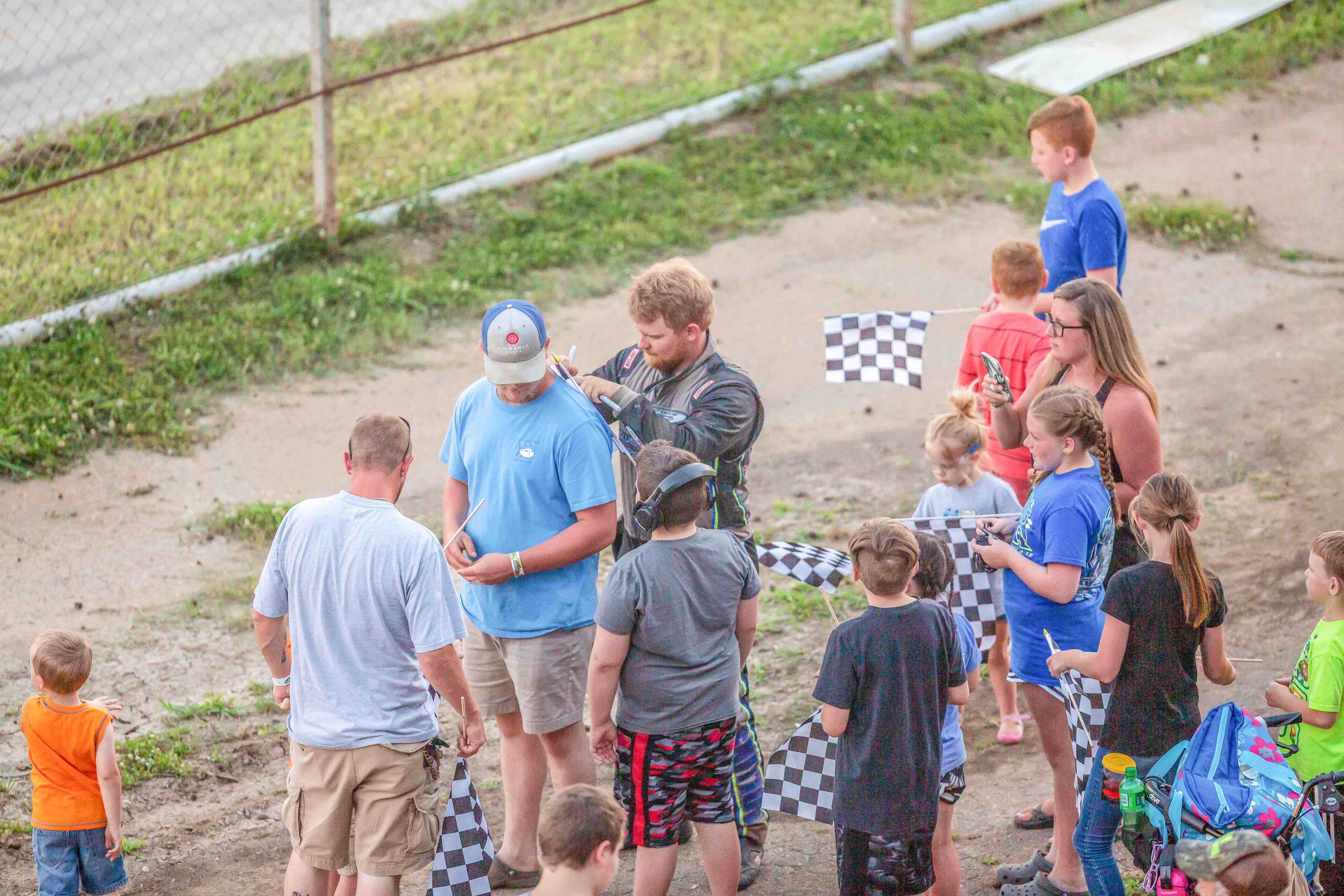 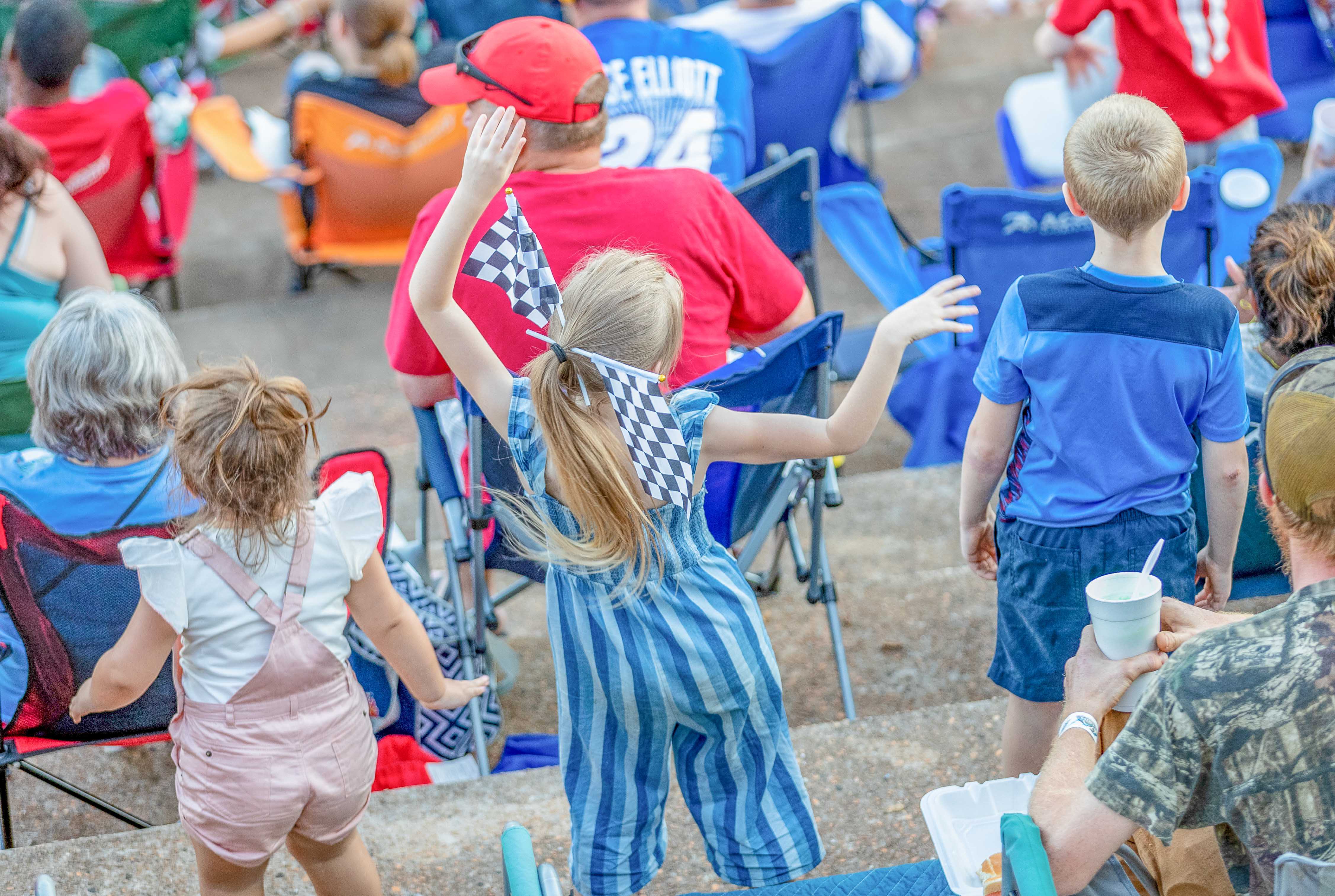