Medicaid expansion – if not now, when?

Just for one day

The secret ways in which fathers can help their children succeed

The Great Mind of Edith Hamilton

The battle of the Georgia GOP is underway

Americanism is not extremism

GOP- do away with Obamacare?

Response of Trump base’s: Great idea; do away with Obamacare. But please leave my ACA coverage alone! Especially now that I’m out of a job and have no insurance due to COVID-19!

Outrageous? In 2009, clueless anti-ACA seniors shouted: “no government interference in healthcare” …while they carried signs saying: “hands off my Medicare”. At the time, I was a GOP County Commissioner in Georgia and heard the same thing from knee jerk Tea Party types many of whom were receiving government benefits but refused to try to understand the coverage issue.

Do you think that the President was serious when he said: a. “We’re going to have insurance for everybody. There was a philosophy in some circles that if you can’t pay for it, you don’t get it. That’s not going to happen with us.”; and b. “the Republican Party will soon be known as the party of healthcare.”?

Of course, he was being dishonest, no surprise given his record. The GOP has not come up with a viable ACA alternative in 11 years.

But for some strange incomprehensible reason, Trump’s still pushing repeal in the courts. On 3-2-20 the Supreme Court announced that it will be reviewing the ACA’s legality once again, with a decision expected in 2021. This time with a much more conservative SCOTUS than 2012.

The majority of Americans now support the ACA (see below), patterned after Governor Romney’s very successful Massachusetts program. As Mitt stated: “Without Romneycare, I don't think we would have Obamacare.”

Romney got the idea from Senator Bob Dole and former GOP Presidential candidate who got it from the right-wing Heritage Foundation. Heritage proposed it as a counter to Bill Clinton’s complex plan for healthcare reform. And, as an alternative to expanding Medicare, the “socialist” (Reagan’s words) program seniors love.

Under the ACA, many GOP constituents are receiving very substantial subsidies in order to buy private insurance. Many other voters are now covered by ACA Medicaid expansion, currently in place in all but 14 states (including red states). With repeal, pre-existing condition insurance clauses would be back, hitting those 50-64 the hardest. These active voters comprise a key portion of the GOP’s base. Further, forget keeping your unemployed 25-year-old on your insurance plan. That kid will be off your insurance, even if they have cancer.

The KFF chart (2018) below showed the extent of American support for each of the ACA’s major provisions: 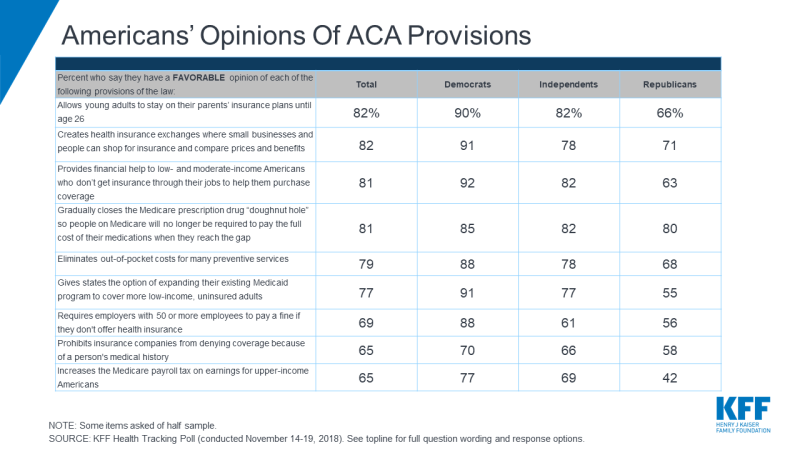 The only unpopular provision, the individual mandate “tax”, was repealed. Even the majority of Republicans endorse each of the key provisions of the ACA (except for the upper-income payroll tax increase). And, the overall support for the ACA has risen to 55%, about a 10% rise versus 2018 (KFF tracking poll, 2020).

Of course, if respondents were asked about “Obamacare” versus the ACA, the answer might still have been different. The GOP base has been blinded to the benefits of “Obamacare” via rhetoric backed up by the right-wing media, Fox, Breitbart and others. After all, according to Trump and his state-controlled media, Obama never did anything positive.

Frankly, a CNBC poll was done in 2013 asking about the ACA vs. Obamacare and many folks did not know that they were the same thing. A Morning Consult survey in 2017 found that 35% still didn’t know and I suspect many are still clueless, the way the GOP leadership wants them to be.

Healthcare reform is especially tough for GOP leaders, who take ambiguous positions. For example, McConnell’s comment about the White House needs to work it out with Pelosi, not him. Senators Grassley and Alexander are the key Senate Committee Chairs regarding healthcare reform. Alexander, who’s retiring, criticized the Justice Department for pursuing repeal. But Grassley, afraid Trump will “primary “him, remains quiet as usual.

If the ACA were repealed, the Urban Institute (6-19) estimates a 65% rise in the number uninsured, from 30 million to 50 million. And that was pre-pandemic. Many of them are in Trump’s base, although they will never believe repeal affects them unless Fox tells them so.

Unfortunately, such is the state of tribalism in today’s America, a situation promoted by Trumpian rhetoric and stunts, as evidenced by his use of military force to clear away peaceful protesters so he could have a hypocritical “photo-op”.

General Mattis is correct, in a time of crisis, the President should unite us. But Trump is a divider. Until the two parties can come together, as they did to pass Medicare 54 years ago, we can expect more of the same throughout the 2020 election season. My only hope is that the situation will change after the election.

Jack Bernard, a retired SVP with a national corporation, was the first Director of Health Planning for Georgia. He was Chair of the Jasper County Commission and Republican Party. He Chaired the Association of County Commissioners of Georgia's Tax Committee. He is currently the Fayette County Vice-Chair of the Board of Health.