But the young stars of dirt track racing turned their fortune around on Saturday night as both claimed feature victories in glorious fashion. Winger topped a stellar field of Limited Late Models, while Knowles outdueled growing legend Bubba Pollard in the Crate Late Model division.

The 3/8ths mile clay track ran for a second time in three days on Saturday night. Once again the track was not allowing fans to watch, with the exception of those tuning in through paid television sources.

“We are following the guidelines provided by the state of Georgia,” said promoter Mayes Massey. “Our priority is our drivers’ safety, their crew members’ safety and our staff safety. We want to race. We need to race for the business side of things. But we are not prepared to throw safety and well-being to the side.”

A national audience enjoyed some of the racing that has made Senoia Raceway one of the more talked about racing facilities in the country. Side by side, multiple groove racing took place in all classes on Saturday as they local divisions had their opportunity in the spotlight.

On Thursday night at Senoia Raceway, Bubba Pollard took the win over Dylan Knowles in the Crate Late Model feature. When the division returned to the South’s Baddest Bullring last night, it was Knowles getting the upper hand after a thrilling battle.

Knowles took the win over Pollard after an extended duel between the Alabama driver and the pavement Late Model standout racing at his home track. The exchange started as the duo worked their way around the polesitter, LaGrange’s Colby Darda.

“I’m not going to say we had the best car,” Knowles said in victory lane. “The 91 (of Darda) was good. I think he got in the water down there. He pushed and Bubba turned under him and they got together. I knew that was my opportunity, so I went around the top as hard as I could.”

Knowles and Pollard would exchange the lead multiple times over the following laps, exchanging passes and slide jobs. Knowles was able to wrestle away the lead before he and

Pollard encountered lapped traffic, which allowed him to hang on for the victory.

“Me and Bubba threw three or four slide jobs for a couple of laps. I beat him out of the corner, and I knew if I could stay on the bottom, I could probably sew it up, and that’s where we stayed.”

Hampton’s Ashton Winger, who will be competing for Rookie of the Year honors with the World of Outlaws Late Model Series in 2020, took the Limited Late Model feature win. After struggling in both the Limited and Super Late Models on Thursday in Senoia, Winger was thrilled to turn things around on Saturday.

“It’s way different than 48 hours ago,” said Winger. “I know this is Limited, but a little over 48 hours ago, we were not very good. We did not do a very good job all night, and we ended up pretty bad in that Super race. I feel better here tonight.”

Winger performed the perfect slide job to steal away the lead just past the halfway point of the 20-lap main event. He shot down low on pole winner Landon Bagby of Winston in turn one before sliding up in front of him in turn two. He never looked back, posting the victory over a hard-charging Clint Smith. Bagby ended up third ahead of Newnan’s Rucker Orr and Meansville’s “Mad” Maddie Crane.

A crash-filled feature for the Late Model Sportsman division saw a multi-car pile up take out several good race cars and a wild ride on the concrete retaining wall by Locust Grove’s Jamie Maurice. The former track champion slapped the wall down the back stretch before climbing on top clipping the safety light and nearly rolling.

When things did settle down, Evans’ Cody Overton moved out to an insurmountable lead that could have been in jeopardy had the race been a few laps longer. Byron’s Wiley McDaniel found some speed in the late stages of the race and was closing in on Overton when the checkers fell over the field. McDaniel had closed to within a quarter second, but would have to settle for second.

The Charger saw some new talent make their dirt track debut on Saturday night. Former legend car racer, Connor Younginer of Stockbridge, used the highside of the race track to overtake Carrollton’s Jamie Godbee on lap 6 for the lead. Younginer scraped the outside wall a couple laps later, but never wavered completing the circuits ahead of all challengers to nab his first career win on dirt in his very first race. Godbee was second ahead of Canton’s Carson Nicholson.

Tennessee’s Michael Courtney battled throughout the Mini Stock feature. He worked his way to the front twice, only to get spun out while racing with Loganville’s Dan Bennett. After the second altercation with the result Courtney having to start at the rear of the field, Bennett then would lose the lead to another Tennessee visitor in Derrick Duggan.

Over the final laps of the four-cylinder class’s race, Alabama’s Bo Minor moved up to challenge Duggan while Courtney caught back up to Bennett. Duggan outran Minor for his first career Senoia Raceway victory, but most eyes were on Courtney to see if he would return the favor offered by Bennett twice earlier in the race. Cooler heads prevailed as Bennett was left alone, finishing in third ahead of Courtney.

The Hobby Stock feature and Hot Shot features were won by Barnesville’s Landon DeGraff and Locust Grove’s Cory Wilson. Both drivers ran flag to flag for their first wins of the season.

Senoia Raceway will return to racing action this Saturday, May 16 with racing scheduled in the Limited Late Model, Crate Late Model, Late Model Sportsman, Charger, Hobby, Mini, Bomber and Hot Shots. All classes will qualify and run features beginning at 6 p.m. The pits will open early, and it is yet to be determined if fans will be allowed to attend. Track officials continue to work with state and county leaders on a reopening plan that includes the opening of the grandstand for race fans.

“Not allowing fans is not our choice,” said promoter Mayes Massey. “We are open to put on a show. It is a major part of our business model. The current situation is like owning a restaurant, but not allowed to have customers.”

To keep track of the latest developments for racers, crew members and fans, the track recommends continually checking their website at www.senoiaraceway.com and following their Facebook page, Twitter feed and Instagram shares. You can also call the speedway at 770-599-6161.

RESULTS POSTED BELOW PHOTOS. ALL PHOTOS COURTESY OF CHRIS MARTIN. 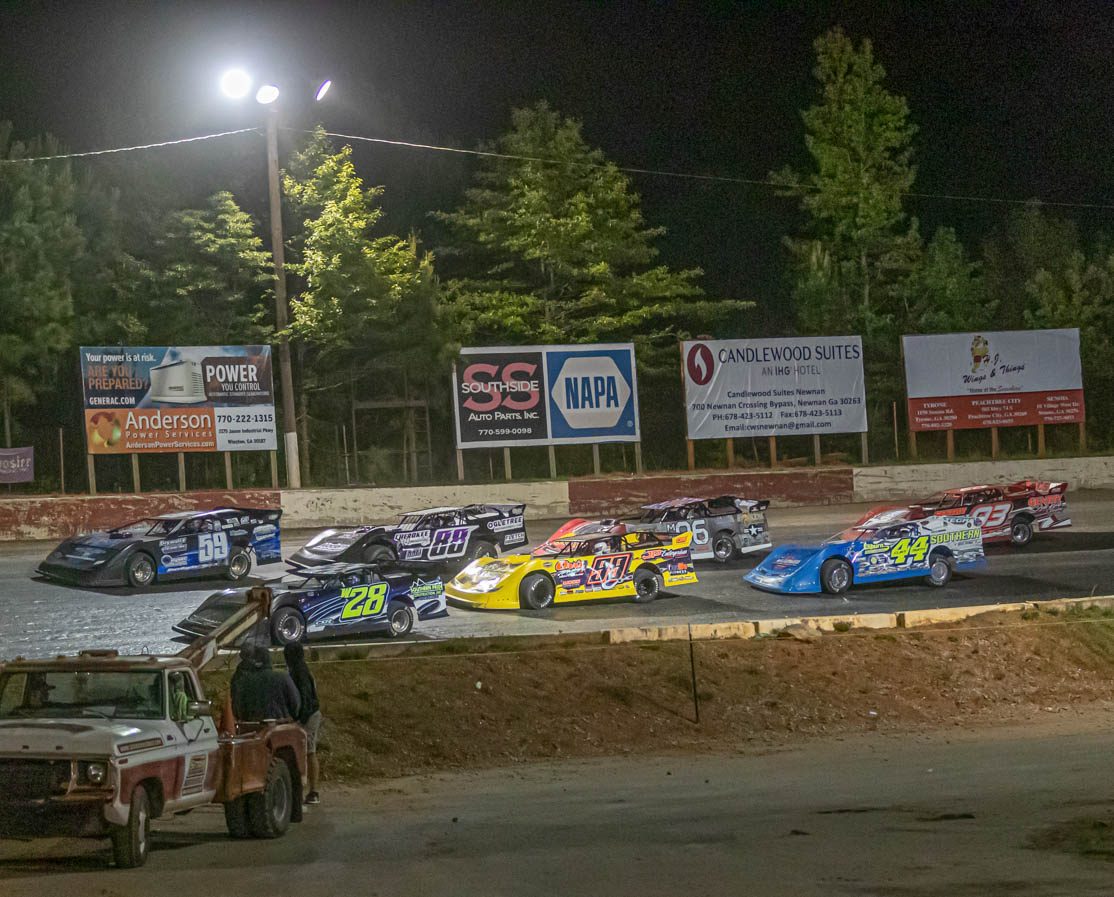 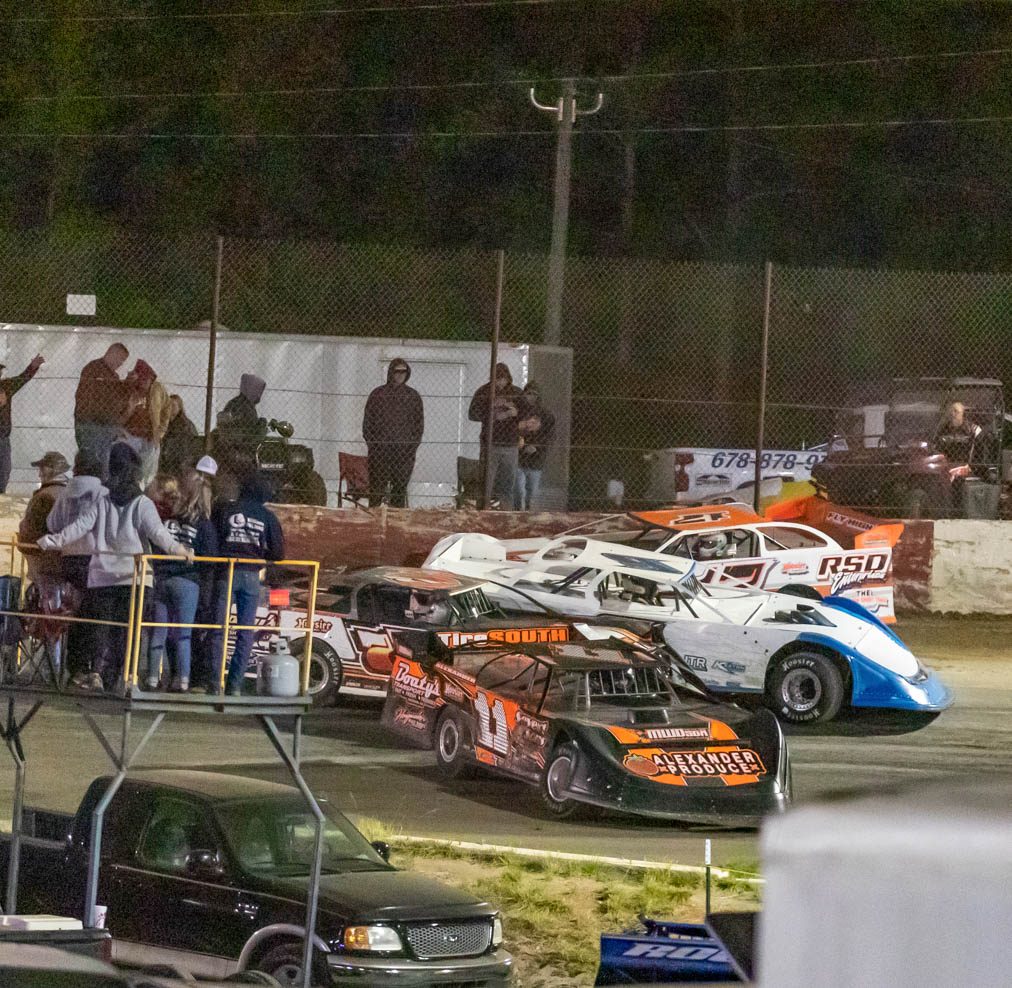 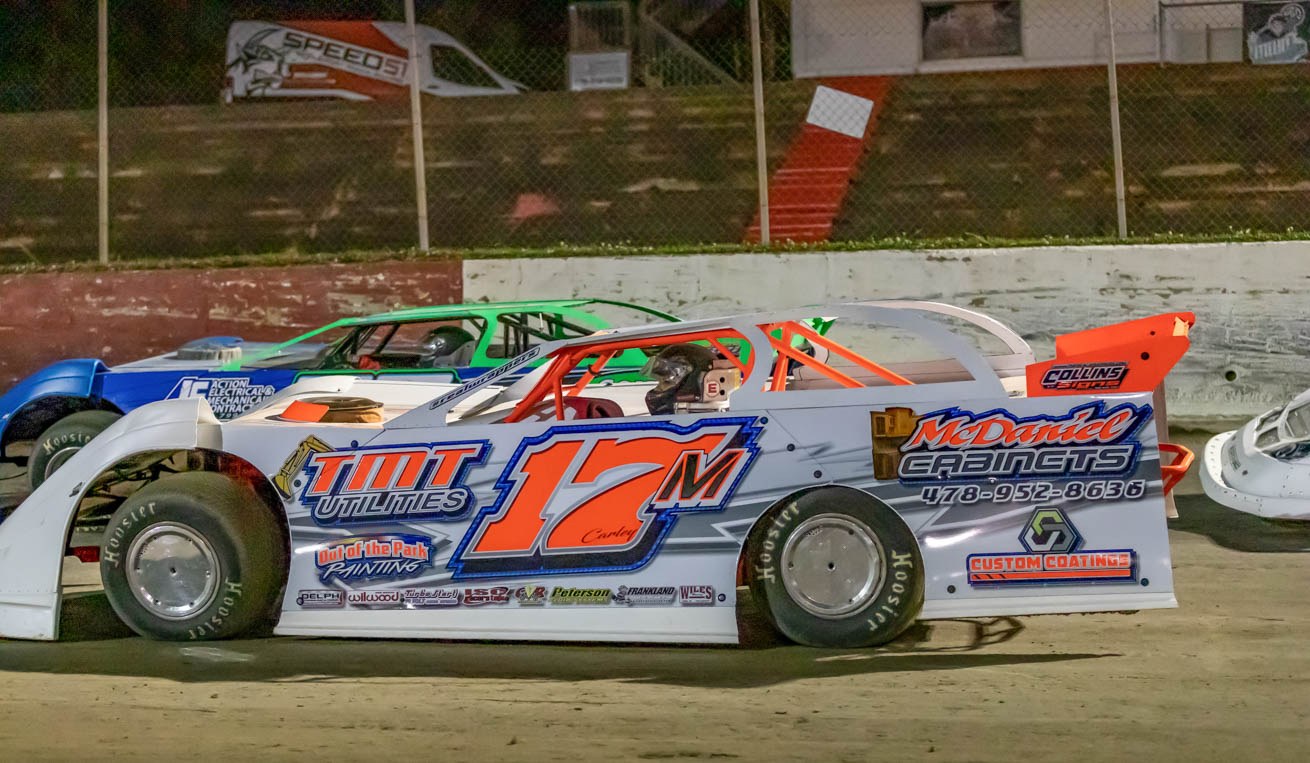 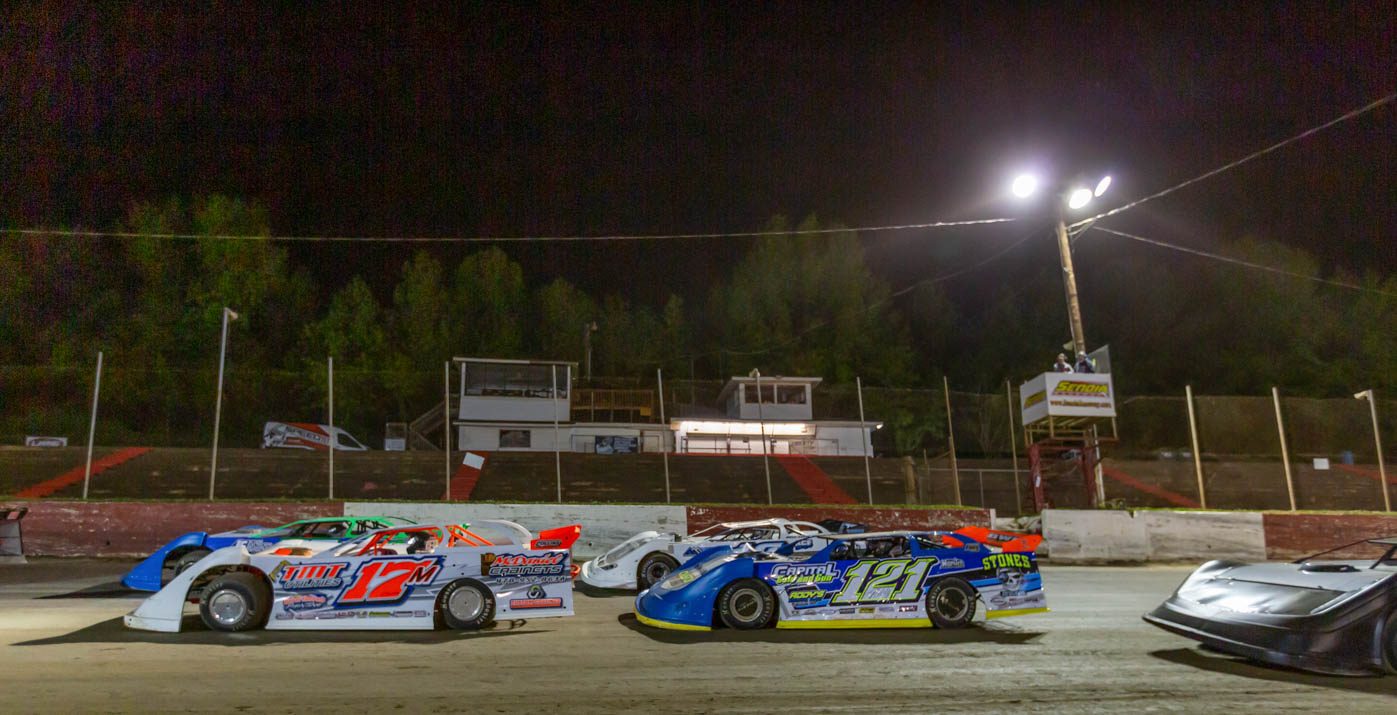 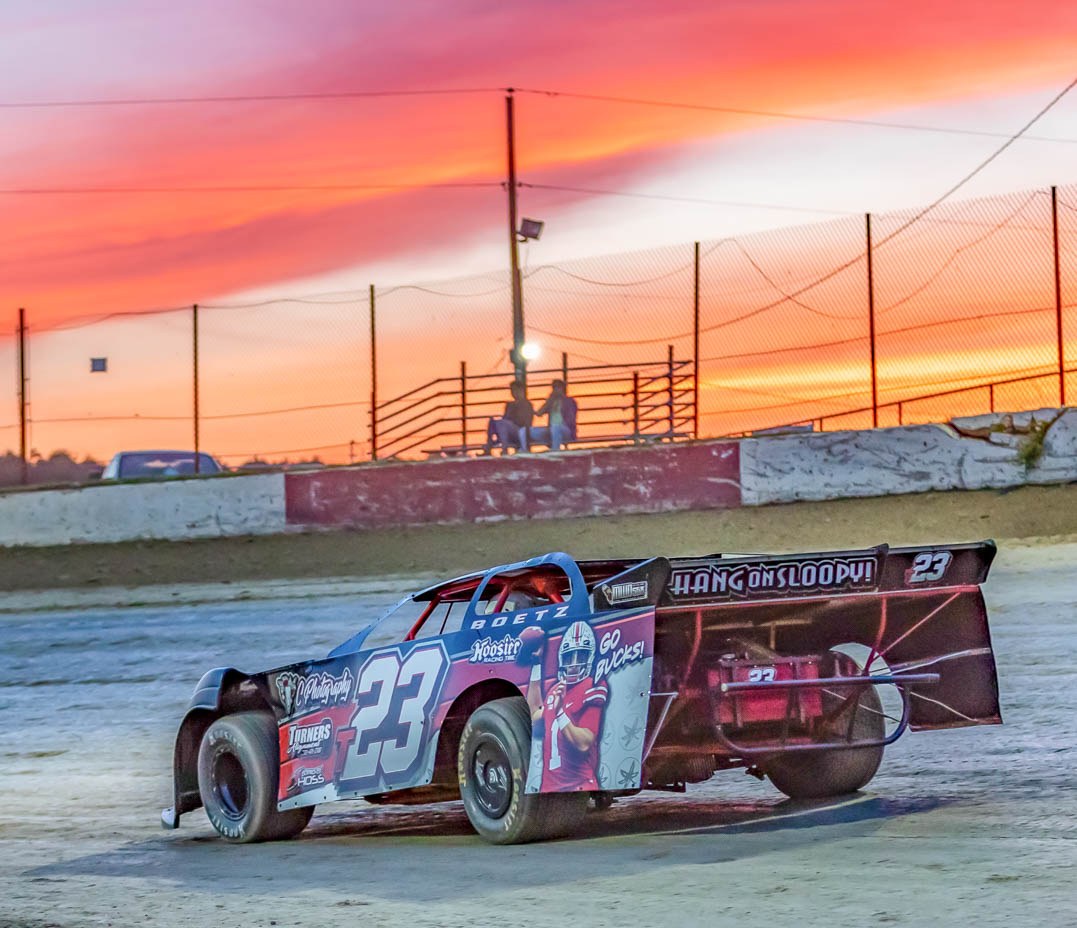 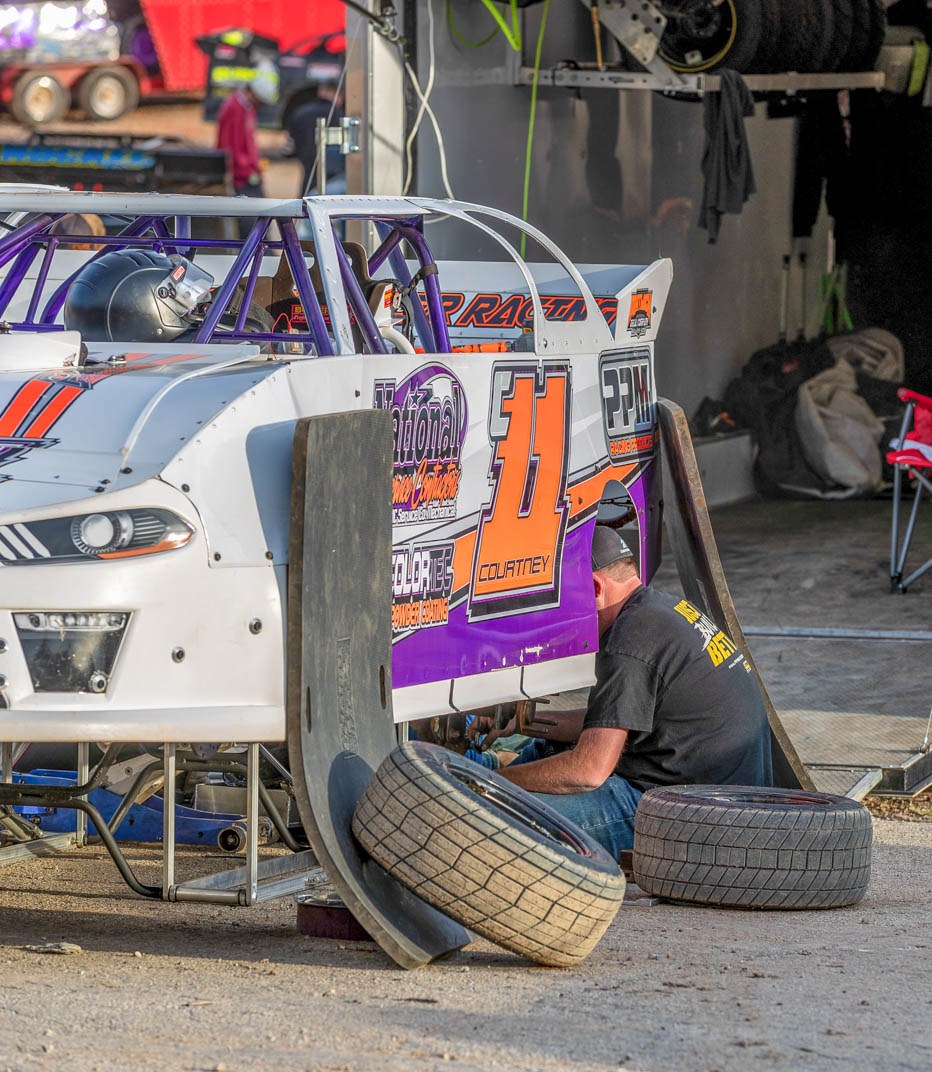 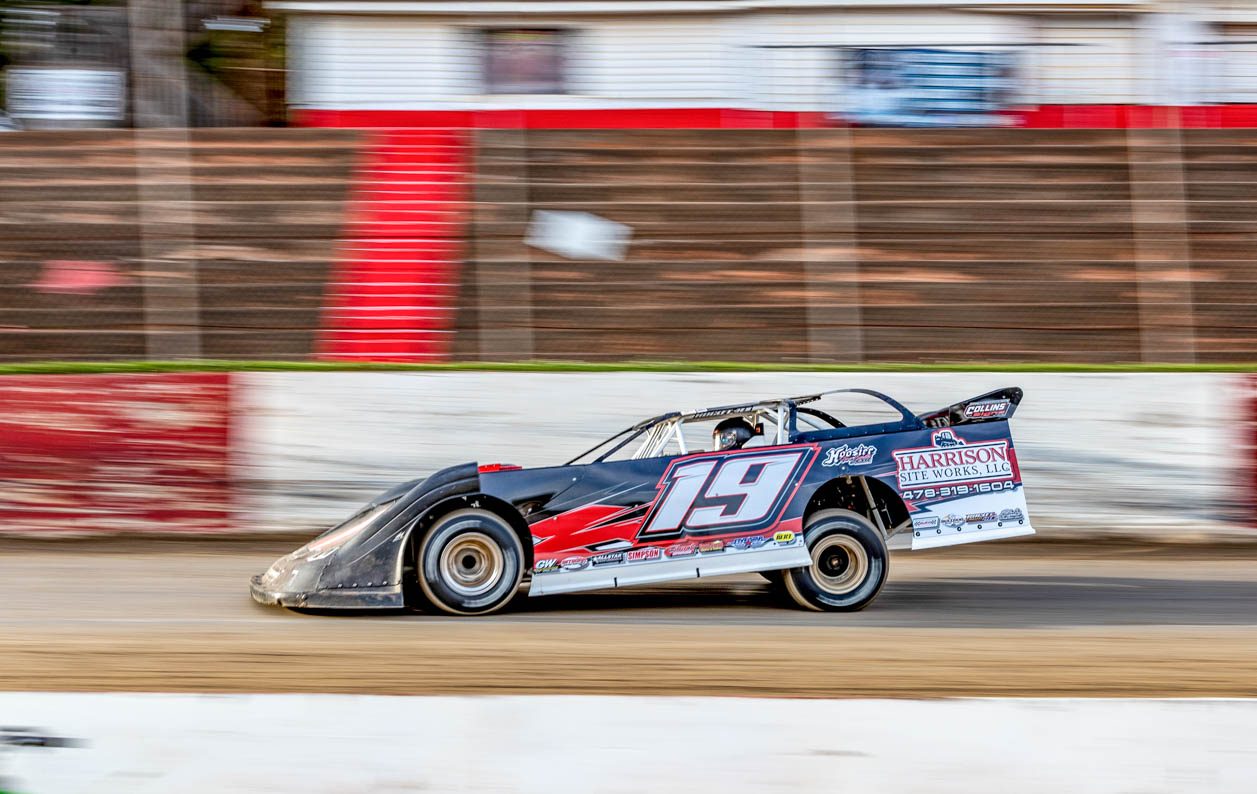 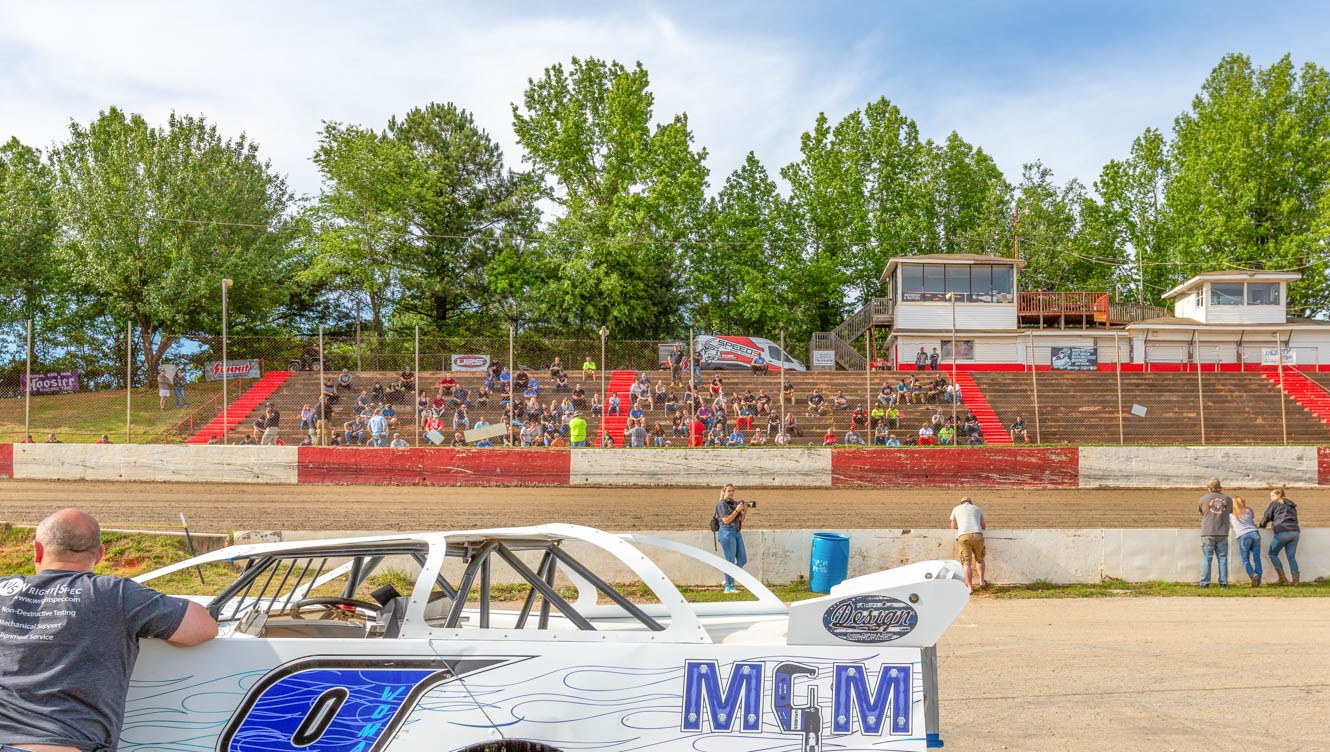